No Money To Go Overseas?

It has been YEARSSSSSS since I stepped into Overseas Jln Imbi. Were it not for the fact that our foreign guests were residing in Marriot, we probably wouldn't have ventured to this area at all. Afterall, there are many other Overseas outlets that are much more accessible. One good thing is they do have a fairly efficient, and reasonably priced, jockey service.

The place looks like its been stuck in a time warp. Not much difference from 20 years ago. Ventilation in the place leaves a bit to be desired, but it was crowded, nevertheless, a testimony of its culinary appeal.

The charsiu tou (head?) has always been one of my favourites. Indeed, the standards have been maintained, and it makes for a fabulous starter. A combo of lean, with lean & fat meats, the caramelized marinade and char makes it rank as one of the char siu greats. 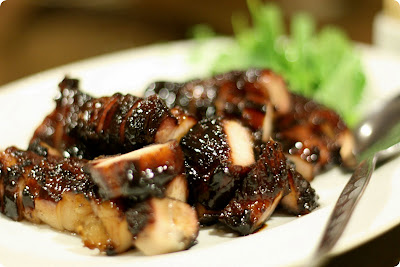 Peking Duck. First, they plonked the platter of skin in front of us, with no pancakes, or sliced shallots....so we weren't sure if it was meant to be eaten like that. My hungry daughter lunged at it as if we've been keeping her imprisoned on bread and water for the last week..... had to restrain her and tell her to let the adults have their share first. Kids these days!!!! Anyway, after asking the blur waitress, if pancakes etc were part of the package (she wasn't sure), it finally came. I am always suspicious of places that serve you Peking Duck without showing you the whole duck first, and carving it in front of you. I mentally tried to piece together the pieces of skin, like a duck jigsaw puzzle to see if they made up the surface area of an average duck...... not to sure, actually. Taste wise, it was delicious. A big redeeming factor, of course. Alas, I only got one piece. I guess it's about right, for 11 pax to get 1 piece each, with some lucky ones getting two. 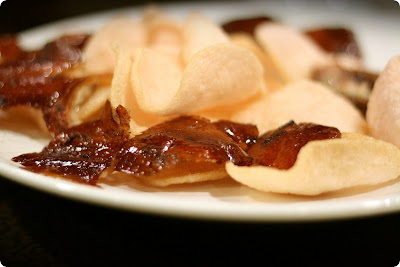 Not in sequence, but this was the duck meat in fried noodles. Tasted very good, consistent with the high standards expected of Overseas. The texture of the noodles were just how I liked it. Song, (what's the english equivalent of "song"? Some say crunchy, but its not quite).... 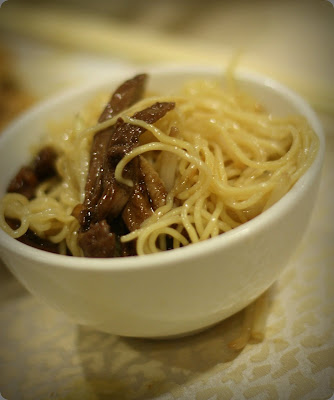 Tau Fu Tau Kan. Beancurd with beancurd skin. A perennial favourite, you cant really go wrong. I have yet to try a bad version of this dish, anywhere. 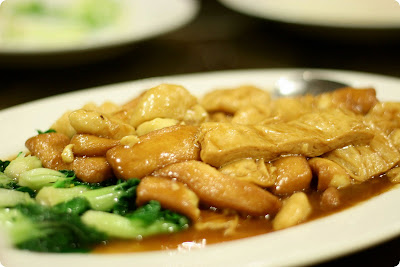 Lovely plump prawns fried with salted egg yolk. At first, in a moment of temporary blurness, I thought the roe was from the prawn. Anyway, the prawns were rather large, and tasty. And fresh. 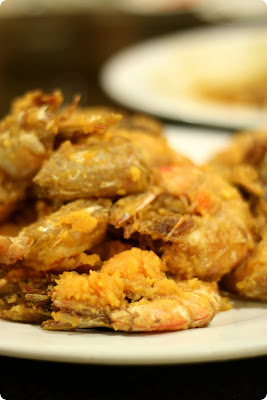 Assam tilapia. Tilapias are a bit of a hit and miss, as you sometimes get that muddy estuarine taste, but this one had tender yet firm flesh, with no hint of the aforementioned shortcomings. The assam sauce was screaming out for rice, and what a heavenly combination they made. 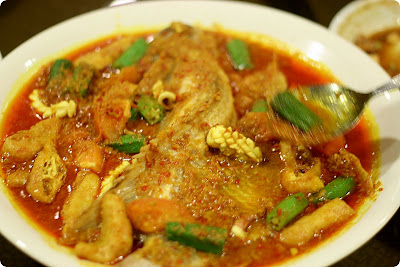 Brinjals and long beans, and I think it was meant to come with 4 angled bean too, which was out of stock. 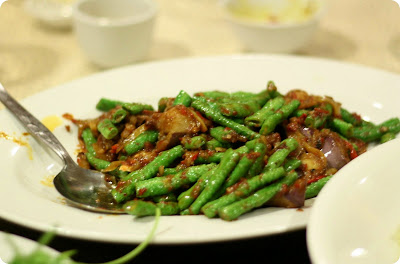 Overall, a rather pleasant dining experience, with a bill totalling approx RM55 per head. A bit on the pricy side, I feel, cos apart from the prawns, and maybe the duck, the other dishes weren't exactly high ticket items. Oh, our guest did have 2 beers, but how much can THAT cost right!

I did miss their signature ham yue fah lam pou....(belly pork with salted fish in claypot).
Posted by fatboybakes at 1:27 PM

the char siew here is one of the best ones i tried. and though i don't know the english word for 'song', but malay word should be 'syok' no?? :P

Is that pancake or prawn crackers in the picture? Crackers alone would've been a dismal letdown! I don't necessarily agree with paying premium prices for everyday dishes just cause, but somehow Overseas gets away with it.

yeah, the carving and chopping and slicing of the Peking duck makes up for the complete experience ...

i like char siew, n the duck, and the duck mee, and anything fried w egg yolks..ok laa..Overseas shall remain on my list of to-eats.. but i stil got so many of the old-old tai chow plcs on my to-eat list..darn..

i've never been to this outlet ... in fact, i think the only overseas i've ever been to were in jaya one and amcorp mall.
peking duck has got to be one of the best chinese inventions of all time. much better than chopsticks. :D

I thought it was going to be a travel post...you had me fooled! I love the Overseas in Jalan Imbi, better than the Jaya One branch...

I always think the Imbi branch is the best. Even simple dishes like seng-kua (petola??) tofu and steam fish are always one step above all their other branches.

psstt.. your fanclub president got get you to autograph posters to be given away to your fans annot?? :D

Thot title was related to the MATTA fair this weekend.

But this of coz is so much better!

Hahahaha...like Tummythoz..i tot you are going to recommend some free holidays!

Yalar, very misleading your title... I was gonna go on a full-fest whining session on how I've not been overseas for the past three years... but I guess I am making up for it this year, hehe.

This Overseas, though, can you believe I've not tried it? *ducks stones thrown at him*

woah, what a retro night! am watching american idol now (michael jackson week) and reading about overseas at the same time!

yeah, i think "song" in the context of noodle means springy.

Oooh one of my favourite haunts! I love the ham yue fah lam poh too. Everyone has their regular dishes at oversea. Mine are beggar's duck, seng kwah tofu and mao tahn yuen hock hai (deep fried cucur soft shell crab). Damn I'm getting hungry.

i used so stay near by only...ya.my mom have friend over there last time .im also century dint been there...

when u gonna call us to go eat the belly pork with salted fish in claypot ?!

the food served here is a notch higher than the other branches.

foodbin, yeah, i didnt think much of the one in jaya one. i think armada one is okay...thanks for dropping by.

ciki, maybe we should go there for wh's burfday dins hor...

breadpitt, aiyo, that reminds me, i still have to pay you a visit hor...

LFB, suddenly that little mermaid song springs to mind...
[part of your worldddddd]
dont even start about going overseas you! hate u oridi.

pea, the professional holiday maker, ...where is your next destination?

bangsar babe, amen to that man...me too. jaya 1 was very ordinary.

nipples, surely streetwise nipple joe couldnt have been fooled by that title?

sean, guffaw, i love your humour. better than chopsticks. we sooo have to meet up.

TNG, i know, its endless right? i reckon if i tried one new place i've shortlisted a week, i probably would die before i finished the list.... choi choi...

j2kfm, my bro in law who lives in ipoh follows ur blog! yeah, all those descriptions will be correct for song, hor...such a versatile word.

550ml, those are keropoks, but they did serve the pancakes too, which i forgot to take, coz had to fight with the kids for my share of skin.

rokh, nice meeting u at the nourishment launch...

one of our old fave, funny i never blog about them :p haha

i tend to use springy or bouncy for "song". would "tarn ngar" = bounce off the teeth??? hehehe

Next destination: Fumen, end of March. Don't ask me where is this place as i have no idea, i will let you know when I come back.

Dip the peking duck skin with sugar and let it melt in your mouth. Ooo...Hmm... Heavenly!

I think the remaining duck meat used for the braised noodle didn't come up to a whole duck. Usually i will just ask them to chop up the duck so that I can see it's the whole in front of me mah lol.

bananaman, hmm, i still havent figured out who you are.
yup, they SHOULD as a matter of standard procedure, dissect the duck in full view of the eaters.

jojo, as sean said, its the best chinese invention...better than chopsticks.

babe, ya, some places we go often, we take for granted, and they never get mentioned hor.

This is one classical Chinese Restaurant that cannot go wrong. We have yet to come across bad reviews of this place ( Jln Imbi )and so let the good times roll like the best tofu vege century egg, steamed soon hock,pig trotter and that salted fish thing you have mentioned ! The cake ?

simon SEOW!!!! lei mou kau chor ah?!!! you HAVE to be kidding me right? how can a guy like you, always got gorgeous chicks around you in all your pics, never tried peking duck before?? I am SHOCKED!!!!