Mesmerizing? Mysterious? Maddening? So many adjectives to describe Malacca. 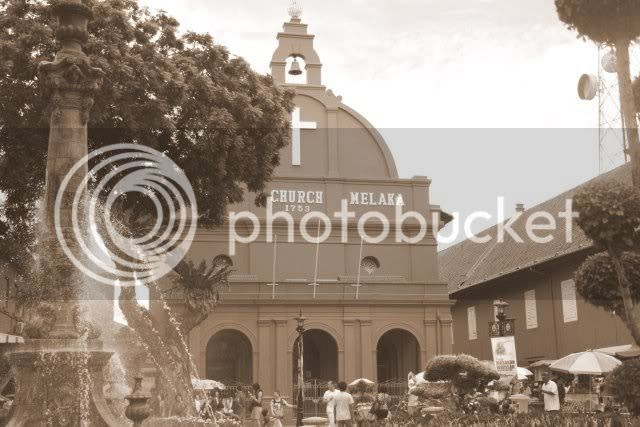 The iconic landmark that defines Malacca, I feel. A trip to Malacca without seeing it is like a trip to Bangkok without seeing a stripper. Hmmm, on second thoughts, that's not a very apt comparison. Okay, it's like going to London and not landing in Heathrow. Poor flers flying Air Asia. Where the heck is Stansted? So yeah, the iconic red building to me, symbolises the heart of Melaka. Afterall, it is on all the postcards. The last time I came to this historic city was in 1992, I think. The river cruise had more charm, and debris... there were large water lizards parading up and down, like buff chappies in the gym...showing off their chiselled taufu bodies.

Organised by one of the girls in our cell group, it was to be a family outing, with an itinerary that makes a 42km marathon seem like a stroll in the park. It was so tight, a mosquito could not fly through.

We had been booked into the Puri Hotel, a charming old world clan house, that spans 4 shophouses, and is so utterly peranakanly quaint, it makes you feel like reenacting Emily of Emerald Hill. 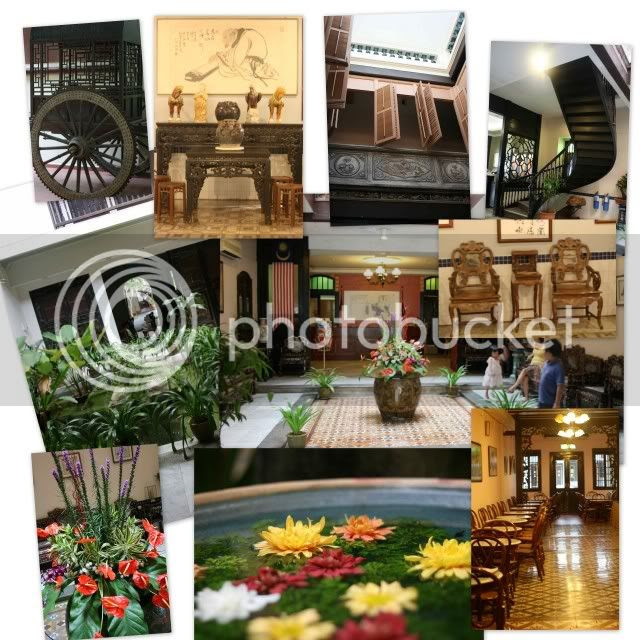 To get some me time, away from the brood of kids, (not only mine, but the others too...and sans maid), I took a walk along the road of our hotel, Jln Tun Tan Cheng Lock, which is parallel to the famous Jonker St. 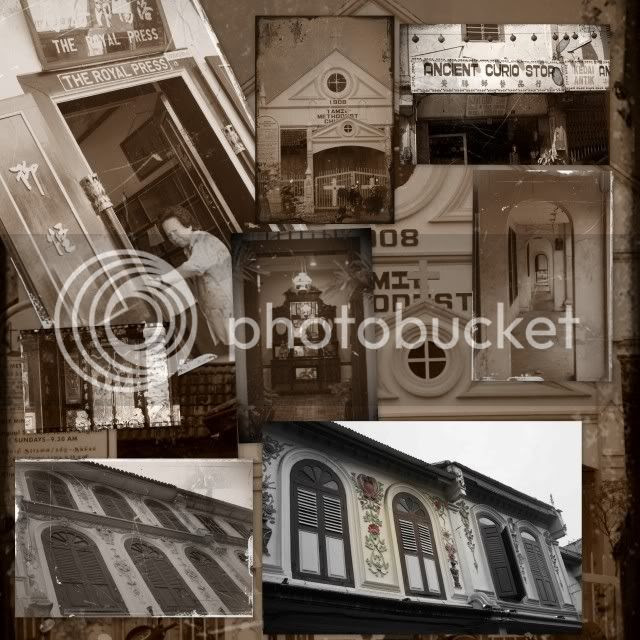 As I strolled down the pasar malam on jonker street, the music was blaring soooo loudly, Hang Tuah might've turned in his grave. Anyway, guess WHAT song was playing, by looking at the two pics below? 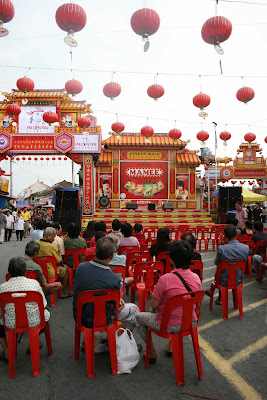 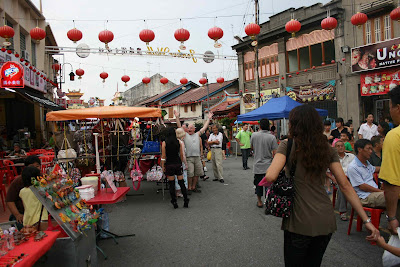 prize is one free scone.
Ladies & gentlemen, we now come to the culinary part of our tour. There are more chendol stalls along the streets of Melaka than there are bridges in Putrajaya. Everywhere you turn, unless you were blind, you'd see the ubiquitous "NYONYA CHENDOL" signs everywhere.

The kids were gleefully excited at the thought of eating chicken rice balls, so our first stop was Famosa Chicken Rice, for lack of any local knowledge where else to go. 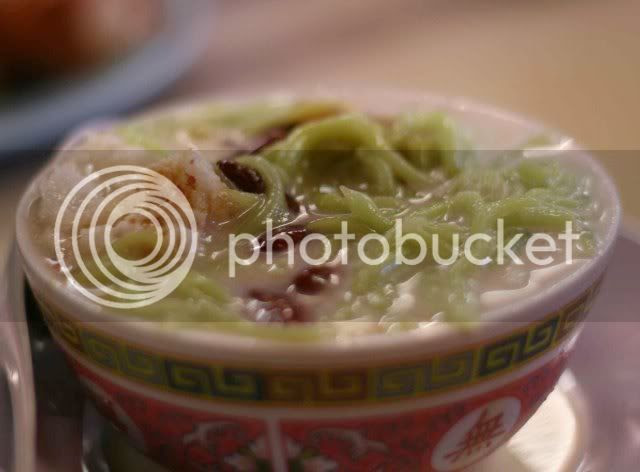 The chendol here was nothing to shout about. 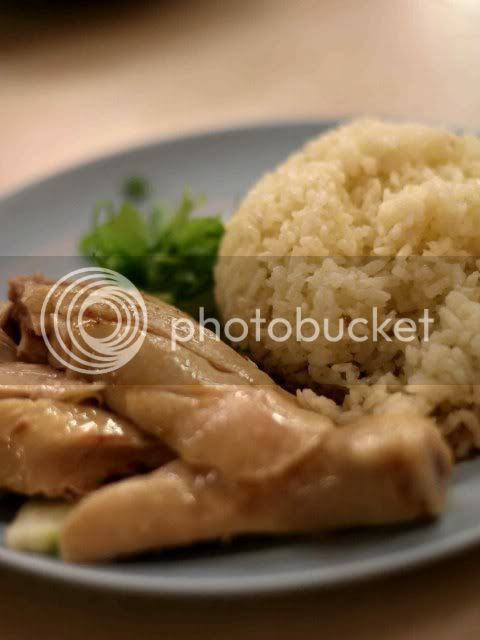 I prefer normal chicken rice to rice balls. Not bad, RM4.30 for drumstick rice. Rice was tasty, and fluffy... 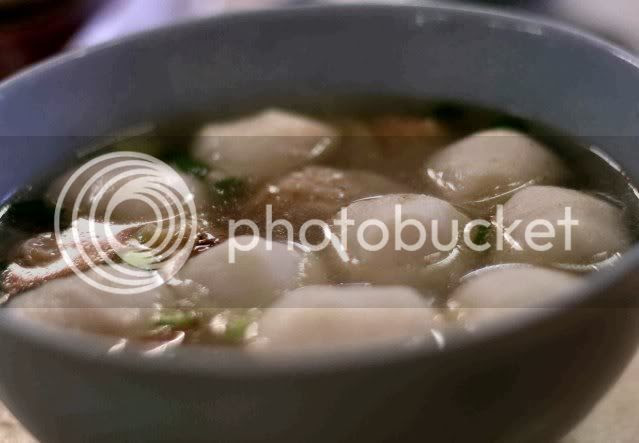 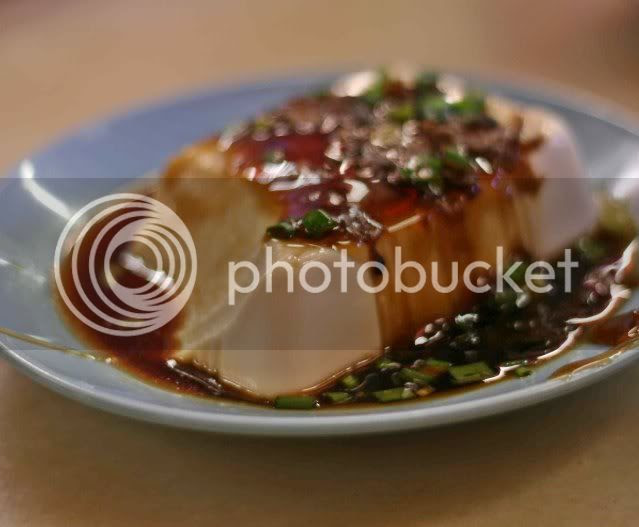 Tofu for the kids... 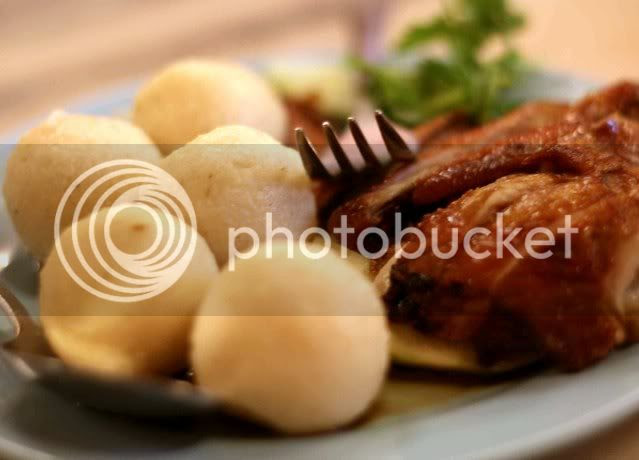 The famous chicken rice balls...kids loved it. I dont like the texture AT ALL, and don't see what the fuss is. I thought balls were only served to the dead on ancestral altars....but obviously there's a whole niche market of rice ball fans out there. I reckon there must have been some practical reason why the rice was rolled into balls. Probably for easy eating for the peasants who didnt have time to wash their hands. Can prob just tilt their tupperware and plop, the ball will roll into their mouths. Chinese are such practical people. Unlike western food, that needs a whole array of surgical equipment to consume.
The next day, the group had on the itinerary (the tight one) lunch at FAMOSA again! (Actually, the 1st day, I didnt read the itinerary, and went there by ourselves, not knowing it was in the plan)...so wife and I broke away, like the Protestants did from the Catholic Church during the Reformation, from the main group, and went foraging for some other food. We found, next to the famous 88 Jonker St Desserts place, number 86 Jonker St, a non descript kopitiam, that didnt have the queues of 88....which was surprisingly good. 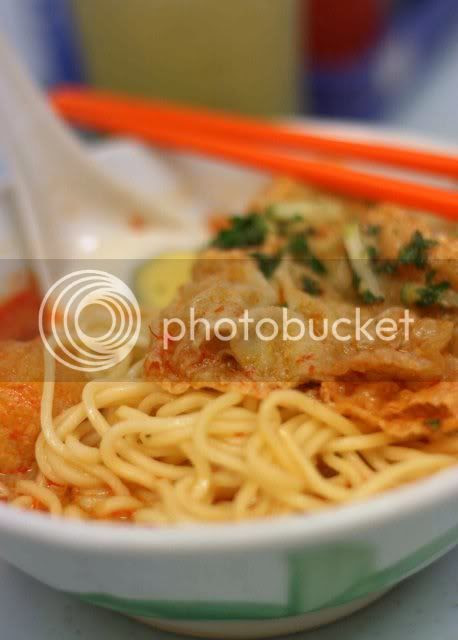 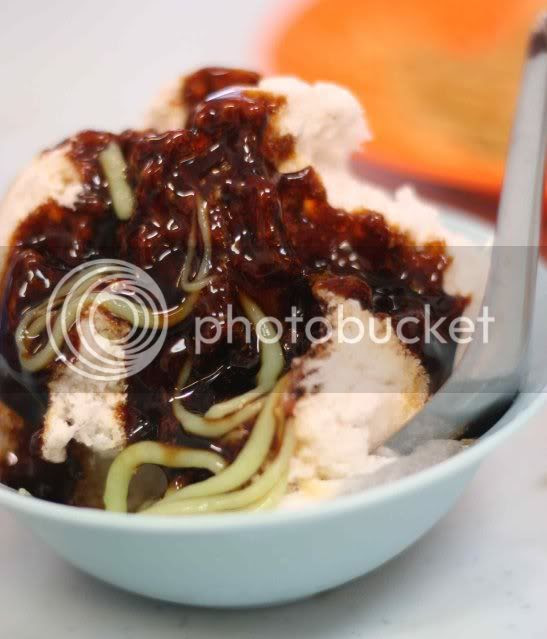 And THIS chendol was the clincher. Smooth silken ice, like freshly fallen snow, and caramelised gula melaka that was good enough to eat just like that. Mmmmm.....this was my highlight as far as food was concerned.

We had dinner at the Peranakan Place, a stone's throw from the hotel. Nothing to shout about.... the chicken pong teh was decent, the rendang quite good, the cincalok egg tasty....and we were too hungry that I forgot to photograph the other dishes. 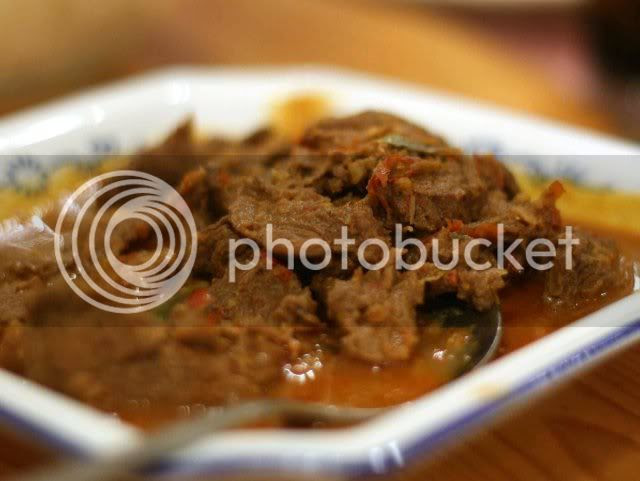 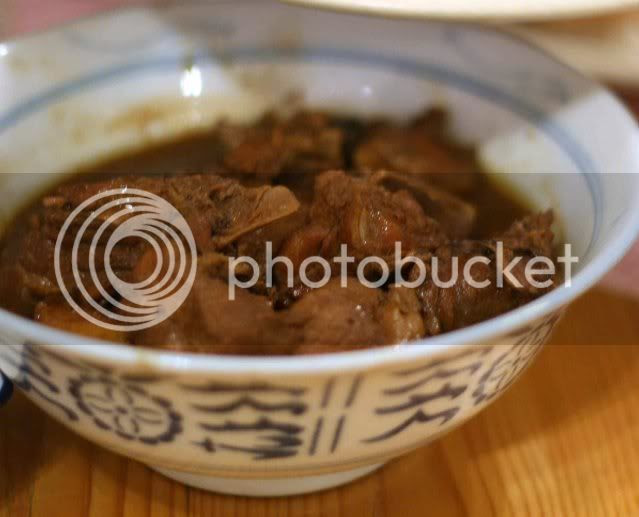 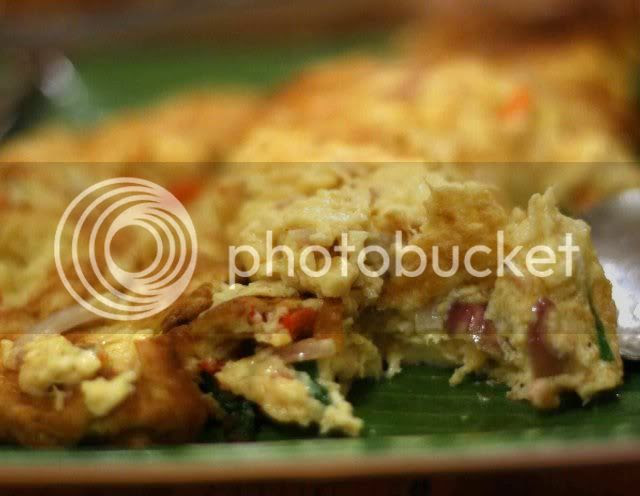 Some stuff from the pasar malam. So colorful hor! 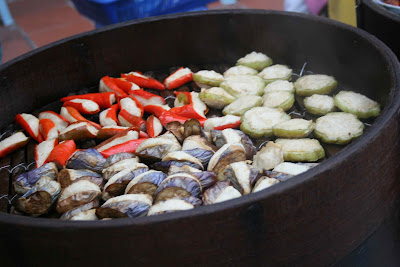 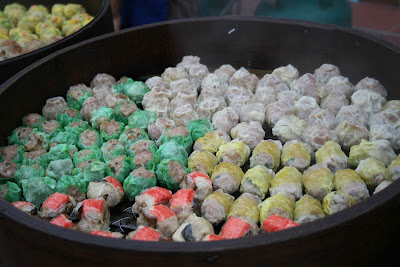 So yeah, in 24 hours, we got slaughtered by trishaws, went up the revolving tower of Melaka, walked the pasar malam in Jonker St, visited the Chan clan house museum, went on the river cruise, had a Sunday devotion and worship, ......

I wonder why I'm exhausted!
Posted by fatboybakes at 11:44 AM

You mean the rice ball is small enough pop into the mouth?? Errr.. afturds get choked how?!

The song is Mama Mia

how to pop whole ball into mouth eh? can choke one leh ...
then 10L of the sweeeeeet elixir (gula melaka!) also cannot help you liao ....

nice shots of the town and your accomodation, btw

but u ar, empty promises ony. u still owe me a scone and some molten choc cakes from previous deals. you have 14 days to deliver, failing which you will be hearing from my lawyers.

ahhh, my (not-so-beloved) hometown.
why no satay celup?

too exhausted to bake for the next few days?? ;p

The second cendol looks much better than the first...and the gula melaka looks crazy thick!

Looking at the good food...reminds me why i want to be Malaysian....

I cannot imagine, if you are writing a blog on Penang trip, i might just have maggi mee and imagine that its assam laksa.

mh, yes, it is one of the most alluring things about our dear country... hmm, i coulda sworn i've done penang blog...

ciki, not one day larrr...1st day lunch, chicken rice, (normal one, not balls), dinner at peranakan, 2nd day, lunch nyonya laksa. where got a lotch?

bangsar babe, nice write up in NST! (everyone, babe was in NST). definitely chendol no 2 was FAR more eligible.

thenomadgourmand, how you know ah? i was JUST telling AWOL that very fact..ie, too tired to bake.

sean, why not so beloved? aiya, didnt have time for satay celup...where to get it anyway? someone blogged abt it recently, darn, cant remember who.

chis, thamby, what you know the song...after the hints i gave, even my 3 year old fish in the pond would know...

thanks for compliment on pics.

vivien, alas, its not mammamia..

been ages since I visited Melaka; sobs at the sight of the yummy cendol. Like Ciki, I am amazed you can cover so much in one day...bow down to the master!

i dunno wor..i thought the balls were indeed practical..one poke with the fork..and voila! in the mouth..

Maybe it's just me... cos I never found a good Nyonya cendol in Melaka. Even the one with the thick caramelized gula melaka wasn't that interesting. Where did you have yours? ..the one in the blue bowl..

joe: we chinese people use our chopsticks, not forks.

i made a mistake,should not come over to ur blog so late...makes me hungry..the chocolate ..im so sorry..;-0

If only we could have a taste...

duodishes, the US dollar buys 3.7 malaysian dollars (ringgit)(for 1 USD). to give you an idea, a bowl of noodles cost around that. time to head over here for a long cheap holiday. warning though, starbucks coffee and other brewed coffees are expensive.

breadpitt, the chocolate is my fault. dont apologise. still okay or not?

henry yeo, tis true indeed, that chinese of yore used chopsticks, though it is now not a rare sight, especially amongst anglophiled chink kids, to use forks...i hear the cries of my kid "cannn i have a forkkkkk" when served with noodles.

teckiee, leng lui, long time no see hor. that one was at 86 jonker street, the nondescript kopitiam. but what defines a good cendol really?

bangsar babe, bask in the glory...

nipples, that wat i said, chinese are practical ppl, one poke, and gone...

boolicious, well, we had a very energiser bunny leader, who drew up the itinerary. i was tired just reading the program....ciki thinks i ate all that food in one day...prob thought i whacked the whole tray of colorful dim sum too...hahahah.

yum! gimme the chicken rice! i am missing mlk already :(

PS. For the record, I do want scones but scared of being swamped by layers of your adoring fans.

Sorry you got slaughtered, glad you enjoyed the fooooood. :D

Wow.. the pictures of Malacca are so nice!!!

selba, thank you , thank you..when are u visiting us? i noticed u are in jakarta. u MUST visit KL and make sure the food bloggers arrange a big welcome foryou.

LFB, yeah, well, if the trishaw flers are representative of malaccans, hmmppph...i lodged an official complaint at the tourism office. but i have to say, it is SUCH a charming place.

hahaah, tummythoz, sarcasm will get ya nowhere young lady!

xin, melaka is a MUST visit i think for a big food blogger group...picture heaven, food paradise, (if u know where to go, i'm told)...we can always drag LFB to be our guide.

yeah, i lurve malacca cos it's clean and so tourist-friendly! and i oso dun get the balls. passed by the 2 infamous ones, saw the mad queues and left for a bowl of really good nyonya laksa..haha!

ok lar, to be fair, i heard the balls are able to retain heat much longer, so it's more delicious to bit into la. eh, suddenly your heat capacity theory (melting spencer) comes to mind! ;D

omigosh, hairy berry, that is BREEEEEELLLIANT!!! i never thought of that aspect. the retaining heat thing. yup, one large sphere as opposed to hundreds of little rice grains. hmm, whats the formula for surface area of a sphere ah? 4/3 pi cubed? ...that's volume hor...

yeah i went there during xmas, bloated ALL the time. lol. wanted to try out so many food but only one stomach and 2 of us..bah!