Pimping Time....Not That They Need It, and Grapefruit Sorbet 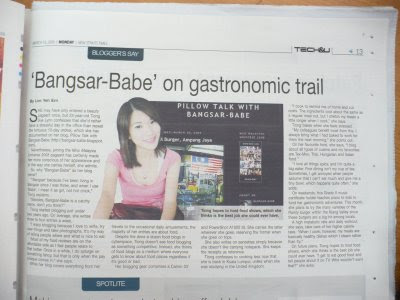 Siapa ini hot chick? None other than our very own Bangsar Babe.... featured here in NST on Monday morning. Anyway, she aspires to be a TV Food Host... with looks like that, the battle is already 50% won, I'd say.

Another blog that I recently got addicted to, because of its deadpan but spoton humor, is A Lil Fat Monkey. One of the few food blogs, if not the ONLY one, that takes on a comic format, it is absolutely hilarious. I owe the man a debt of gratitude, for designing a very cute logo for me, AND for propelling me into the world of high class cosmetics.... (not that I use them, and I have kept this fact conveniently hushed from the wife). Alas, he updates his blog with the regularity of a lady's ahem.... yeah, about once a month.... okaylah, maybe twice...

Ever since the February Daring Baker's Challenge, which required making home made ice cream, I have rekindled the flame, ..or should I say, I've refrozen the ice, for making homemade ice cream. With haagen daz at RM31 a tub, (it used to be RM17 or so when they first appeared on our 3rd world shores), it makes sense to explore making your own.

After I started churning again, my mother suggested I try making Grapefruit and Orange Sorbet, which she tried in Oz recently.

Anyway, I tried this recipe, and its not bad. Omit the zest if you dont like that bitter taste mingling with the tangy juice.

2 cups of grapefruit juice - 500ml (I did the math, its cheaper to buy fresh grapefruit at RM2 each, rather than buy a carton of juice at RM23 /litre)
1 cup orange juice
1/2 cup lemon juice

Zest from 2 grapefruit and one orange
1 cup sugar 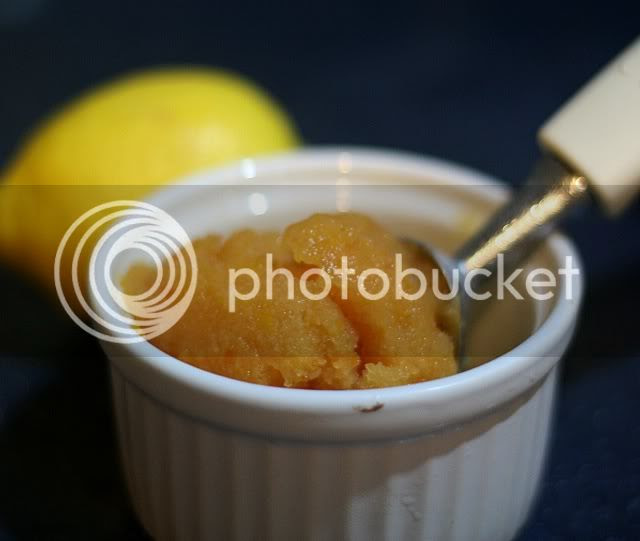 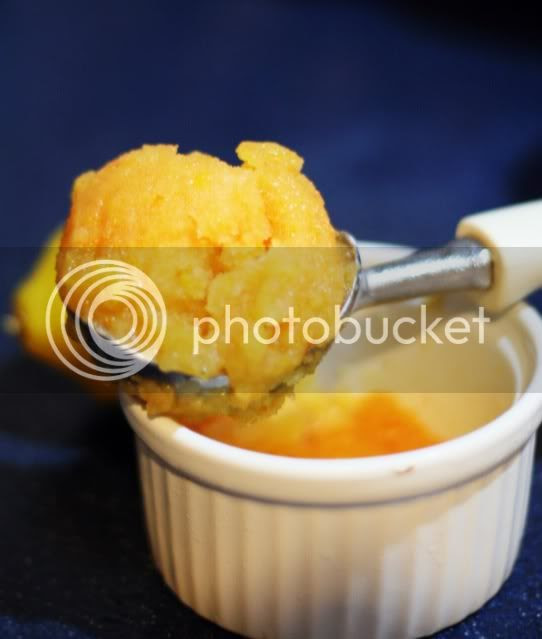 Highly refreshing, but a tad bitter, so I might omit the grapefruit zest the next time. Possibly it could have been the pith that made it bitter as well...but there was very little pith.

Posted by fatboybakes at 1:26 PM

a pithy post though, with no hint of bitterness. ;)
can you come up with an impress-your-friends recipe for people like me who have no fridge at home? or electric beaters.

HAHAH, you know sean, before i read your comment, the same word crossed my mind...what a pithy...
no fridge at home? howwww can that be! oh, yalar, for someone always fine dining, i guess there's no need for a fridge at home hor...

well..if this goes well in a cake, i'll order one!

Hey, thanks for the pimp! It's really sweet of you. Much appreciated! =D

One carton of grapefruit juice for RM23?? Sorbet looks lovely! Maybe you can start selling ice cream by pints. =P

time for me to dig out the ice cream maker too! sounds so refreshing

what brand is your ice-cream maker?? i was itching to get one. i recently saw Cuisinart in KL but it's so freaking ex rm2699!!!

the latest addition to your infamous booze lunches?

grapefruit? yucks ... too healthy lah. lest got CREAM/MILK to mask the bitter/sour taste.

but that wont be sorbet now, right?

Oooh! I got PIMP-ed! Thanks FBB. But seriously, I'm so not worthy to be even mentioned at all.

Thanks for the subtle hint on my regularity. But just like a girl, I've no control over my irregular periods. When it comes, it flows. So, no use counting the days til my next post.

breadpitt, you must teach me how to make souffle...never dared to try...

qwazymonkey, now now, arent ya just the epitome of modesty.

babekl, mine is a cheapo kenwood gelato something something, cost RM199. you gotta pre-freeze the bowl...i think the cuisineart one has an inbuilt freezer... i cant afford those la...

bangsar babe, you're welcome. my pleasure. not that u needed pimping, as i said, and not that myreadership is all that wide, to make any diff, but hey, ....i think so wor, i recall seeing in Village Grocer...sum more only one brand.
Sell ice cream by the pint? haha, the profit margin is pretty low ...

oh, i just rmbrd something else u mentioned! 1st daddy, now pimp.. soon to be sugardaddy la :P

ciki, what's a symen? cant be sugar daddy la, after get diabetes how?

and to pair the wonderful blogs with a wonderful grapefruit sorbet, WAH! yay yummy yay!

hmmm did somebody say sugardaddy? *winks at ciki* I so need one of those. LOL... Shhhh nobody tells McCutie about this.

Symen? Sugardaddy? Irregular periods? And all this on FBB's venerable food blog? (Man, I go offline for less than a week, and see what transpires when I'm gone!)

Your comment section on this post is a PERFECT example of why your blog is a MUST-READ in my book. Hee-Larry-Ears.

P.S. Any sorbet/ice-cream recipe that does not involve an ice-cream machine for us that do not have one? A semifreddo, maybe? I spotted some recipes for those in a Donna Hay mag I was browsing through when the Devil and I had tea @ Lavender, JB yest.

lfb: you want to whisk/churn/beat all those cream into stiff peak for the semifreddo all by yourself? good luck.

LFB: hmmm Donna Hay...haven't read any recent ones yet. Love her photos. Maybe i should go work for her.