Talk about the Laws of Attraction, from that overhyped book, "THE SECRET", I was browsing at the MPH one afternoon, and came across this book. I didn't have an MPH card on me, and me, being a point and discount junkie, would NEVER buy something if I know I left the card at home and could actually earn points.

Not long after that, I get an sms from the author herself. I couldn't believe my eyes. And not only that, it was an invitation for dinner and food review at Chef Choi, which I have been meaning to try, at the behest of Unkaleong who works down the road from there. AND, as an added bonus, I found out as the author, she can sell the book to me at a discounted price. Autographed too! 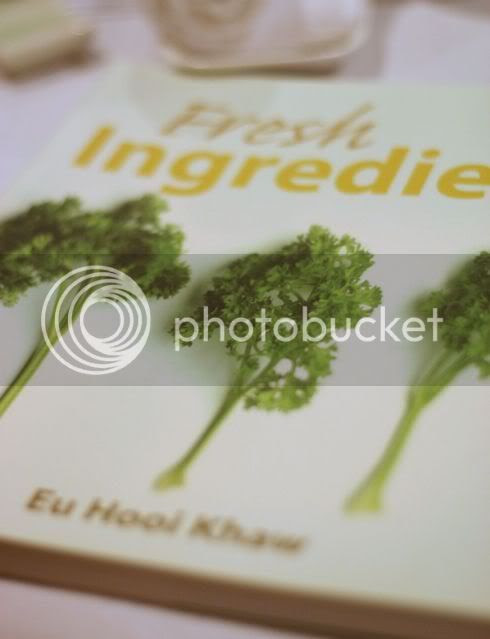 When I arrived, 10 minutes early, some of the other guest had already arrived. From the food blogging fraternity, there was Masak Masak, who was the last to arrive, Cumi & Ciki, and A Whiff Of Lemongrass. 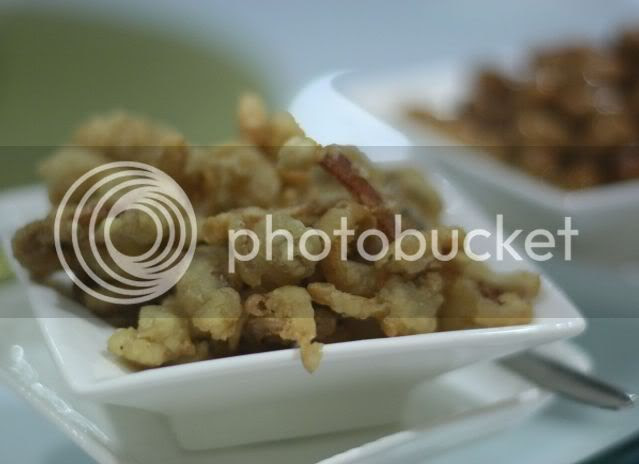 The deep fried squid looked irresistible, but when the host herself arrived, she warned us not to fill ourself, as she rattled off a menu that sounded fit for an emperor. Of course, short of spitting out the squid and steamed nuts, to make way for the impending banquet, there was nothing much I could do but restrain myself. Apparently they usually serve very good siu yoke as the appetizer. But hostess with the mostest assured us that we would have enough meat.

The starter, a fabulous 3 seasons thing. 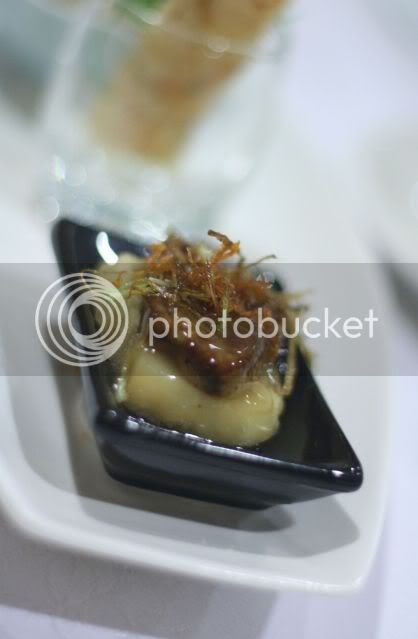 Delicious pan seared foie gras (did I not say it was an Imperial feast), on a slice of bread soaked in lovely sauces. 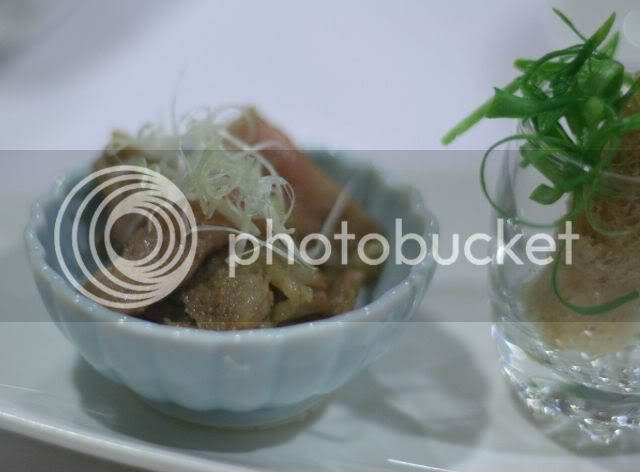 Slivers of oh so tender and marbled matsukaya beef, that is equal to kobe. Simple sublime. Melt in the mouth.

In the middle of the menage a trois was the spring roll, crispy flaky on the outside, with a delicious filling on the inside. By this time, my palate had already been assaulted with so many wonderful flavours, I wondered how I could possibly last till the end of the dinner. 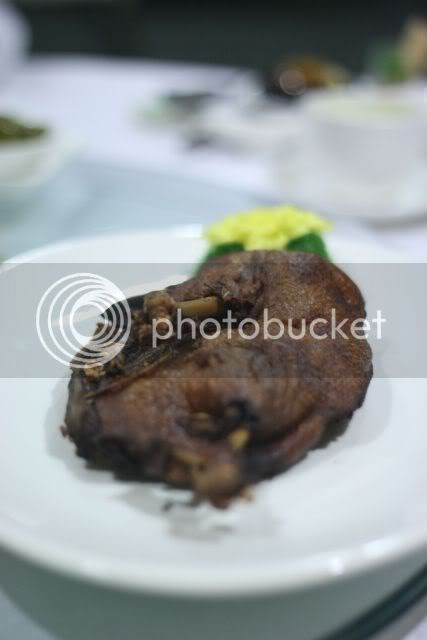 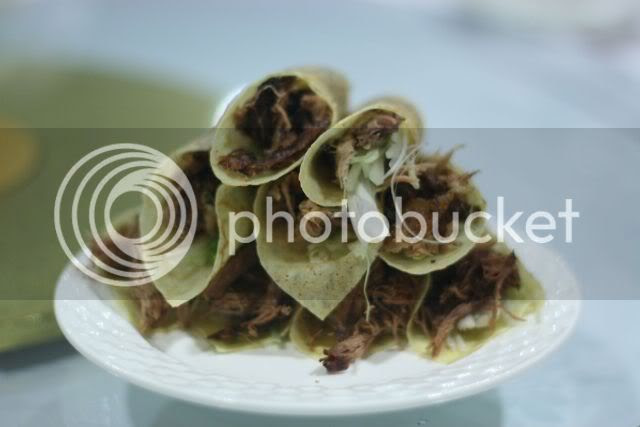 It could be fun to wrap your own, but its so much easier to have it done for you, quipped our host. True, no fiddly messy rolls, all almost symmetrical and perfect. The duck was really tasty, although slightly dry. Also the crispy skin isn't as fatty as their English cousins, which might have explained the slight dryness. 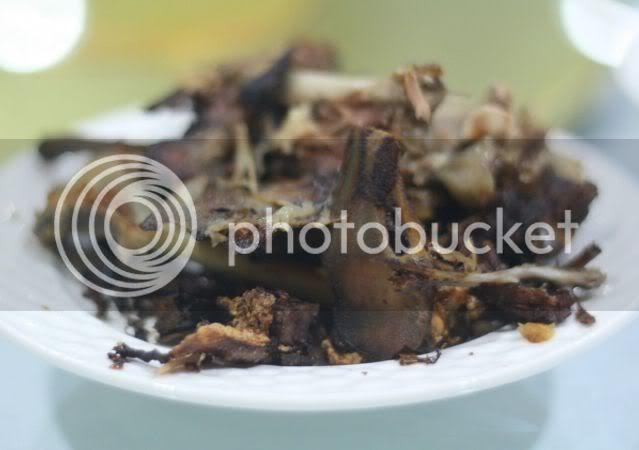 Flesh of my flesh, bone of my bone?! These deep fried bones, the smaller ones, are completely edible, and a lovely and crunchy. Probably good for osteoperosis prevention too, packed with calcium. Yup, we actually crunched a fair lot of it. 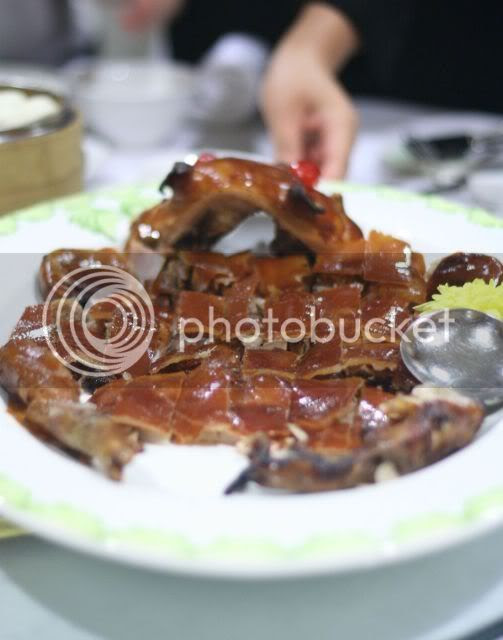 The suckling pig from a rear elevation view. Can I heap enough praise without making it sound suspiciously like I've been paid? Seriously, it was EXCELLENT. Crisp skin, not too fatty, cos the slicing of the skin was expertly done, so the fat was on the meat, not on the skin. This particular dish costs RM168++. Rather reasonable if you ask me. 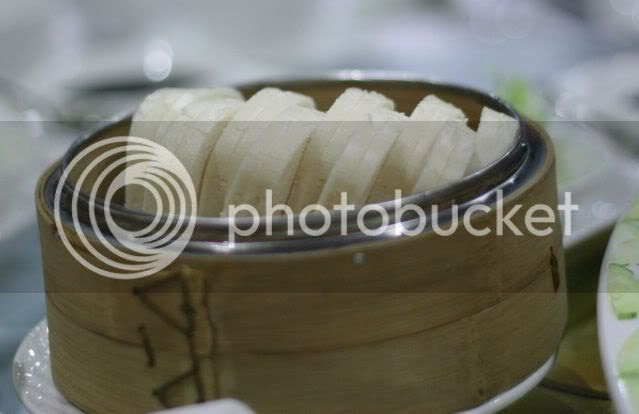 Side profile of the pig. I wonder if its necessary to put the two cherries onto the eyes. 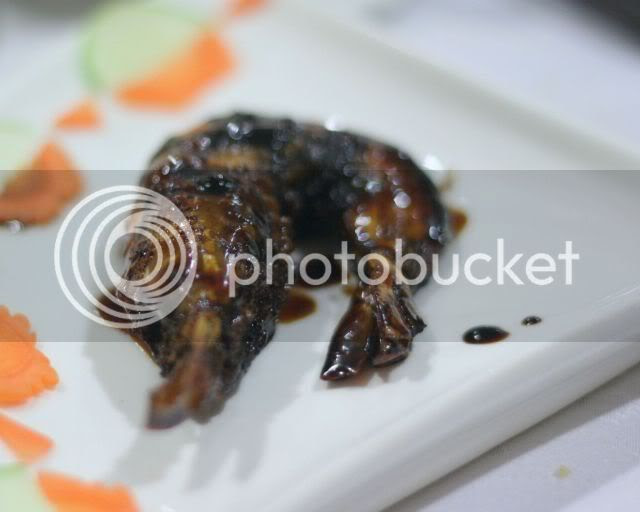 Jumbo Prawns fried in superior soya sauce. Excellent, and I had the good fortune of sitting next to Cumi, who might go into anaphelactic shock (spelling how ah?) if he ate one of those, so I was the beneficiary of his allergy. The prawns were succulent, the head loaded with roe with bursts of flavour as you sucked on it. 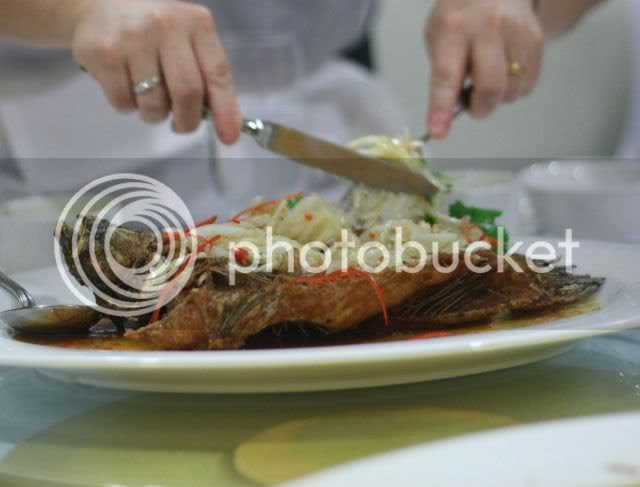 Deep fried SOON HOCK! What a luxury! The host carved it with surgical precision, even faster than the waiters normally do. Though my initial thought was, argh, what a waste to deep fry a soon hock, after my first morsel, I was in palate paradise. Firm sweet flesh, complemented by the tangy thai styled sauce. The ultimate luxury. 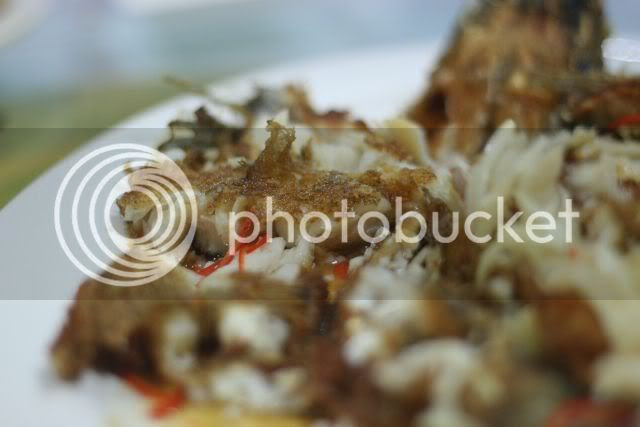 Did I say ultimate luxury? I take that back. Lobster noodles, with an absolutely fantastic Yee Mee. Frankly I wouldn't have minded more yee mee. The lobsters were cooked to perfection, and the sauces that drenched the yee mee makes me salivate now just thinking about it. 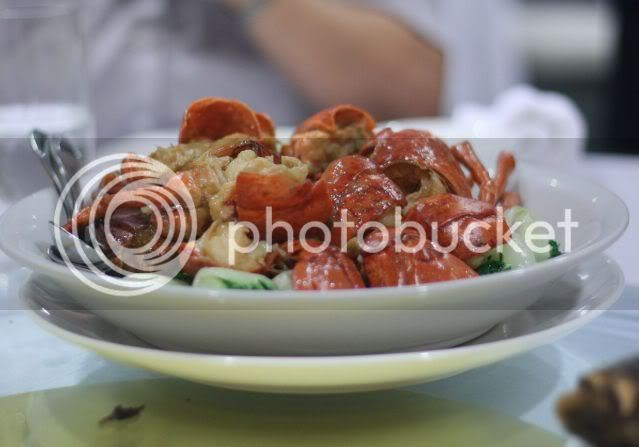 Aerial View of Sebastian. Oh, my bad, Sebastian is a crab. 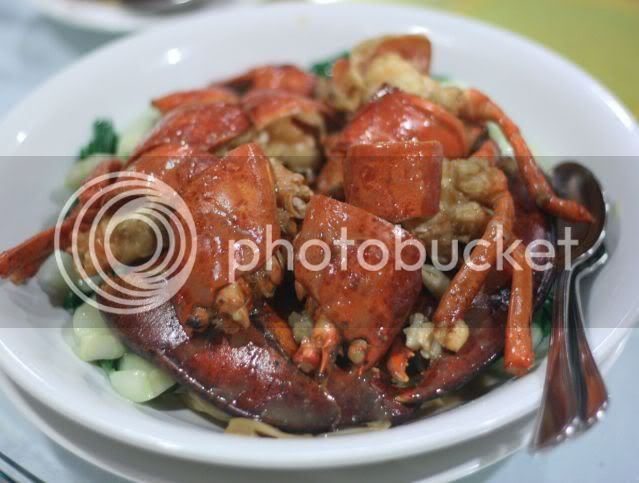 Since Cumi cant eat shellfish, Host ordered this special soya bean noodle (Fun Pei)... Hey, I could omit carbs totally just by eating this noodle. I love the texture, and the taste was superb. 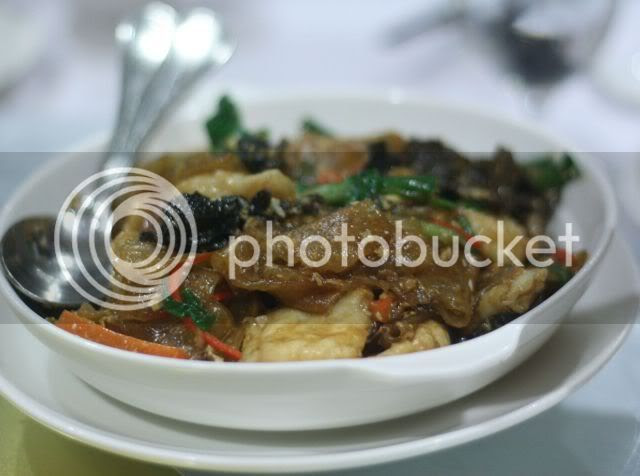 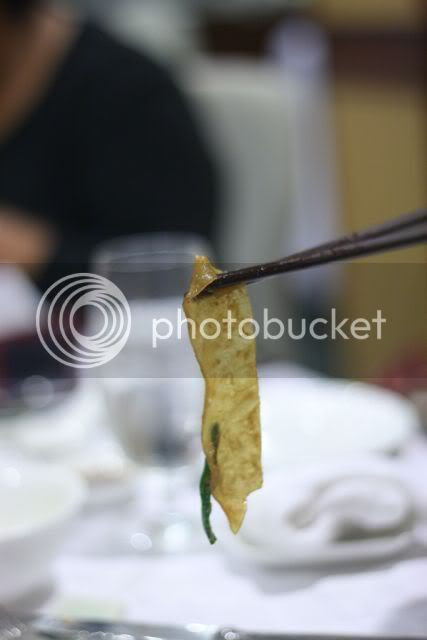 You can't beat this restaurant for uniqueness. This dish, tomato sauce meehoon, apparently used to be popularised in one of the stalls in Campbell Road. (to the youth of today, that's now Jalan Dang Wangi, and the aforementioned stalls no longer exist). There is something just so wholesome and comforting about this dish, and apparently, it tastes even better overnight. 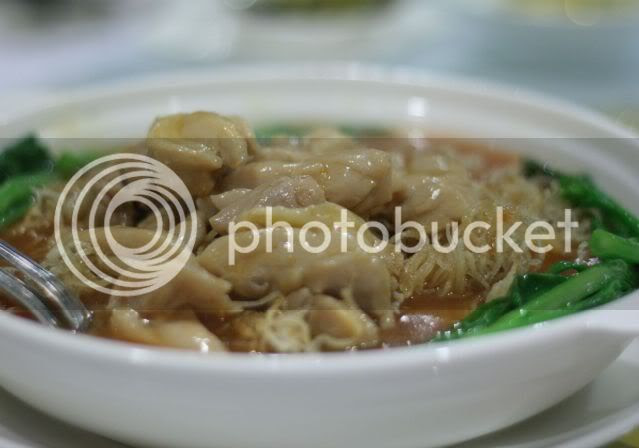 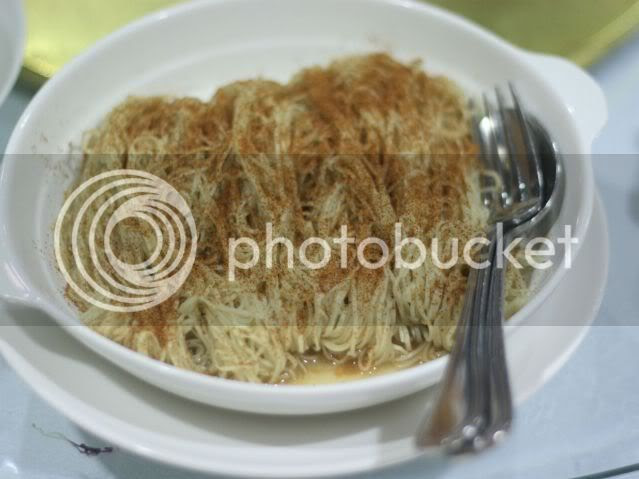 The texture of the noodles, springy, crunchy, and so simple yet so good. The chinese version of a fantastic aglio olio, if you must. 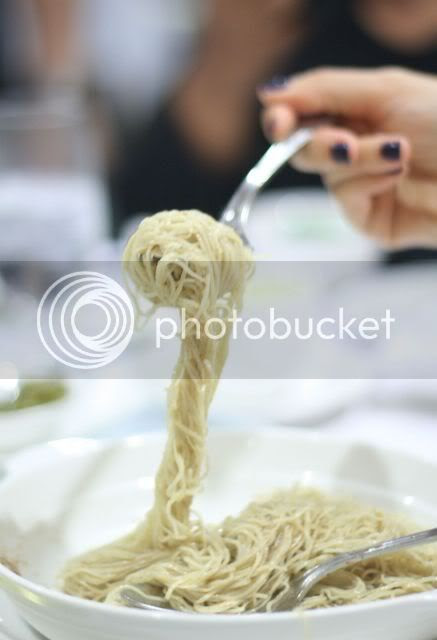 And generally, desserts at a chinese restaurant are limited, but not here. A wide array of western and chinese desserts are available, so much so, we didnt even get around to cutting up the experimental tart I had brought. 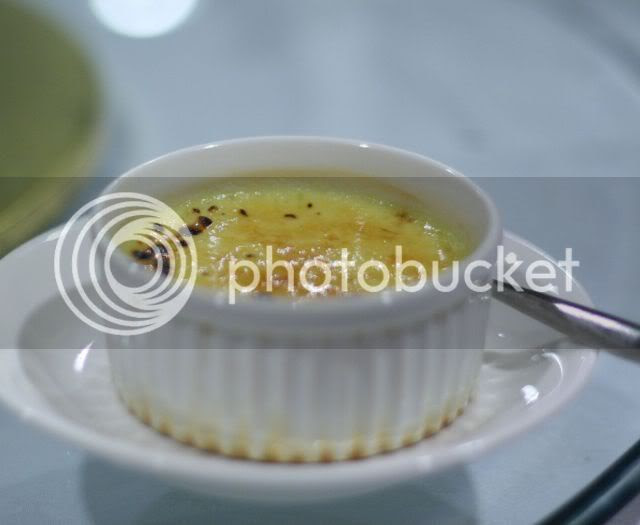 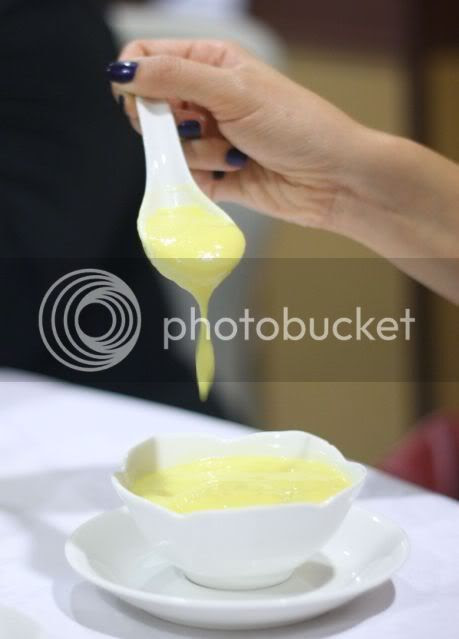 The mango cream, which is basically blended mango with cream. The texture was great, but juxtaposed next to the other offerings, it seemed a tad ordinary.

Almond Milk With Papaya. Some people are averse to almond milk, jelly, etc, coz most places use that revolting almond essence that taste like cockroach. But a pure almond milk is absolutely divine, and has no such smell. 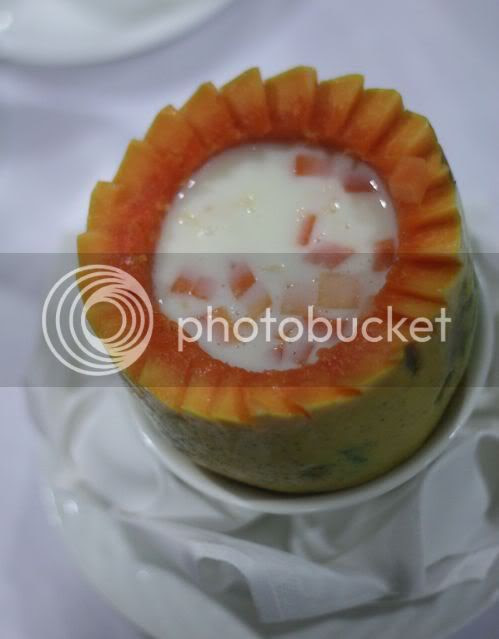 Cumi decided to go with the flow, and ordered the lava with the flowy centre. I don't know what the verdict was. 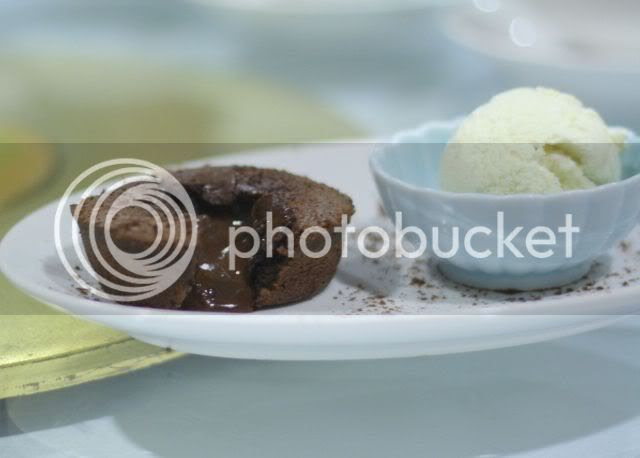 I had the sea coconut, which again, if compared with the other exotica, seems plain. But very refreshing, and really, would BE the dessert I'd likely order again and again.

Thanks so much Hooi Khaw for organising and inviting us, and thank you so much Cheng Sim for hosting this fantastic banquet. Owe you one!!!!

Chef Choi is located on Jalan Ampang, ...if you coming from Nikko Hotel, its the same side, immediately after the Chinese Temple, in a huge bungalow with easy parking. They are currently giving a 25% discount for dine ins.
Posted by fatboybakes at 12:37 PM

25% for dine-in??? Are you sure??? I've been planning to come here for a long time... but the price set me back, and with too many commitments lately, I can't blow my monthly budget on dining just at Chef Choi alone... lol!!
See??? You eat for free...
any idea on how much the total cost?

yeah .. this place is really a classic. if you go there often enough, the chef will wipe up lots of goodies (free) for you to try too!

Cannot remember my last visit. Actually was wondering whether it's still in business since the parking upfront seems quiet and the bungalow has no big windows to peek in.

aiyo! such a feast! Ciki can get you all cheap Lipitors eh? hahhahahah ....

sigh..when can one be famous enuf to get free tickets to such luxuries...

darn. wanted to try this plc since the time Boo blogged abt the tomato mee. Then Unka went few weeks ago and came back with so-so verdict hence the plan went *poof*!
Hmm..or was it a ruse juz to fend me off frm breakin his bank?? ;p

Anaphylaxis, my friend. Which would be a severe allergic reaction that may cause severe breathing difficulty and low BP.

I would have the same reaction too, if I had to pay for your dinner at Chef Choi's that evening.

The treatment for anaphylaxis would be adrenaline, which I would require plenty of, when I do the 400m sprint to my car when presented with the bill.

I jest. Money would be well spent if the food is good and the dining companions congenial.

I am soooo hungry!!! When you coming to Melbourne?

pea, ayam kambing in sept. why? cant tahpau anything for you anyway. you know la, customs so strict.

ah, the good doctor speaketh. hahah, i didnt bother checking it up, and just went by the phonetics. wow, talk about being totally OFF....

TNG, well, the only way to find out is to go again right?

nipples, so speaks the guy who gets invited to PRINCE hotel la, SAGE la, etc for food tastings...

j2kfm, see la, some ppl so young oridi tried har chi meen. me ah, have to wait till 43 before trying it. sigh, i soooo have not lived.

tummythoz, yup, it is still open, though the chef's name is no longer choi.

lianne, oooh, i must go rub shoulders with the chef then. always good to know the chef. especially sushi ones. get bigger cuts of them sashimi ya know.

aiyorrr, such gorgeous dishes and company. the kesian one can only read from across the causeway....heheheheh

i like that shot of the dripping mango dessert! where did u get ur manicure, fbb..? (sings ciki, sweetly..)

CAN! ofkors can get cheap. u also can get wat, mr pharmacist:P

Ayam going to be bugged till I take her there to try the tomato mee, no thanks to you :P

Thule : Walk in discounts till end of August I believe.

This is the 2nd luxurious meal I read today.

How do you score these amazing meals? Each one better than the last. Those jumbo prawns are JUMBO!

fbb, my bro just got back from a wedding chinese banquet in HK. he said the suckling pig have 2 red flashing bulbs stuck to the eyes!!! do u prefer cherries or light bulbs?? :D

Such a banquet! Discount till end Aug eh? *marks calendar*

Ditto what HairyBerry said. Kesian one can only read from across, uhm, from wherever I am at any point in time lah. I miss Kay-El and the food so much!

very underrated restaurant. the hokkien mee there is top notch.

sicko, yeah, that's what i was told too, the hokkien mee there rocks.

LFB, the place is but a stone's throw away from where you live, what tok you!

pureglutton, yup, very worth it with the 25%.

unka, call me la, i dont mind trying some of the other stuff too.

ciki, where indeed was that manicure done?!!!

hairy berry, across the causeway, south of it, also got plenty good food ma....