After an debaucherous weekend of food and drink, I thought I'd be healthy, and told the wife to prepare me a salad lunch with sauteed mushrooms for lunch. She dutifully did so, and I had a healthy slice of homemade carrot cake for breakfast, when I suddenly get a text from Ciki, asking me to join them for lunch at WIP! Them included Eat Drink KL (alarm bells should have gone off in my head at this point, seeing as to how lavishly the guy eats), Memoirs of a Chocoholic, Qwazy Monkey, Nipple Joe and The Nomad Gourmand. How to say no to such a list of blogging luminaries? So I had to chomp down my salad as a snack in between breakfast and lunch, (brunch?)...... 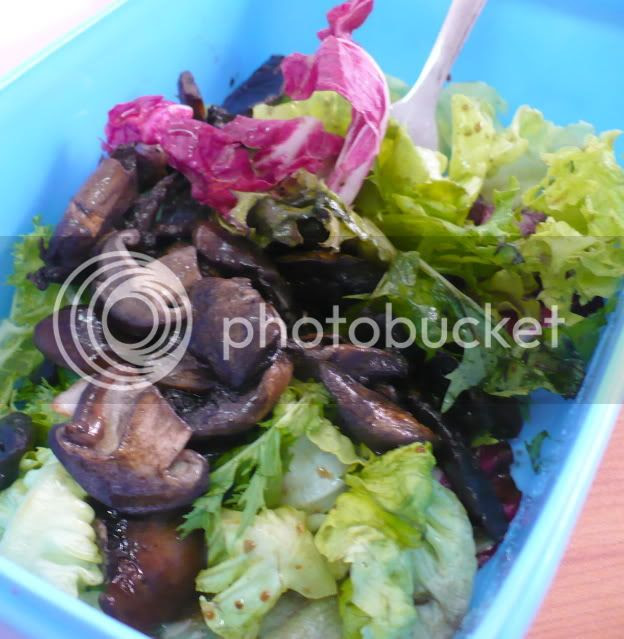 Not bad, lots of foliage. The action of quick chomping of the greens made me want to moo, and poo, all the same time.

By lunch time, the greenery had all but dissipated into a verdant smelling greenhouse gas, so I was ready to start eating again.

WIP which one stood for WORK IN PROGRESS has now renamed itself WHIPPED INTO PLACE. Hmmmm, more about THAT after the review. 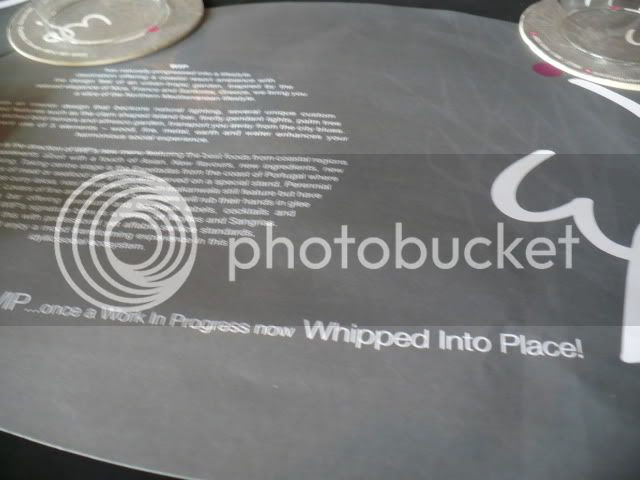 The youth of today manage to look so fresh faced despite it being a Monday and all. 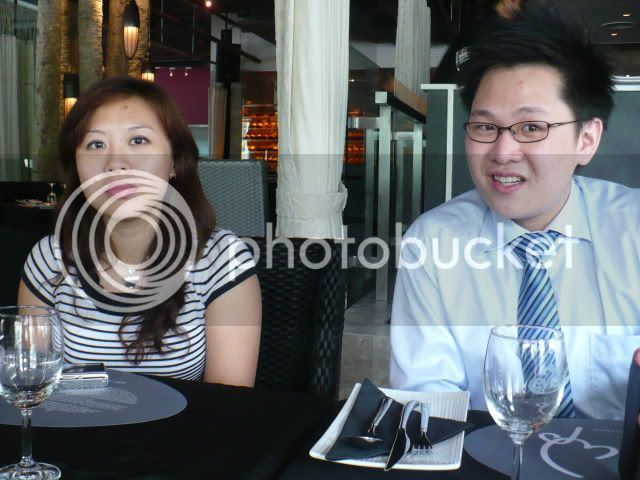 Of course, some can even run 21km and look like they can pose for Tatler immediately after the run. 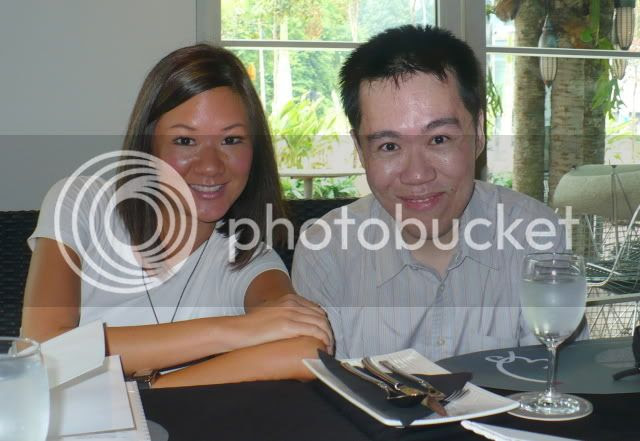 One of the first dished to arrive was my curry laksa, which I had to pre-verify did have cockles. I love my cockles in curry laksa, and if they dont serve it, I would not order. The dish looked impressive enough, large pieces of fried foo choke, (bean curd skin), large chunk of chicken, cockles. The soup wasnt bad, but that large chunk of chicken, ......the sahara has more moisture than that dehydrated piece of blotting paper. 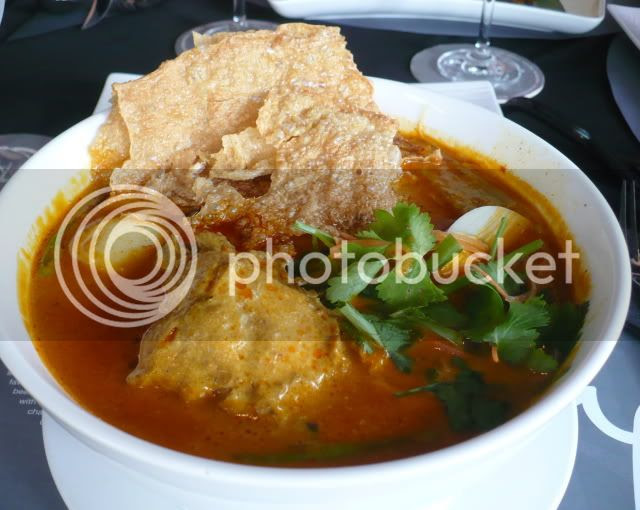 Nipple Joe's Butter Chicken, which he says was okay, but not great. 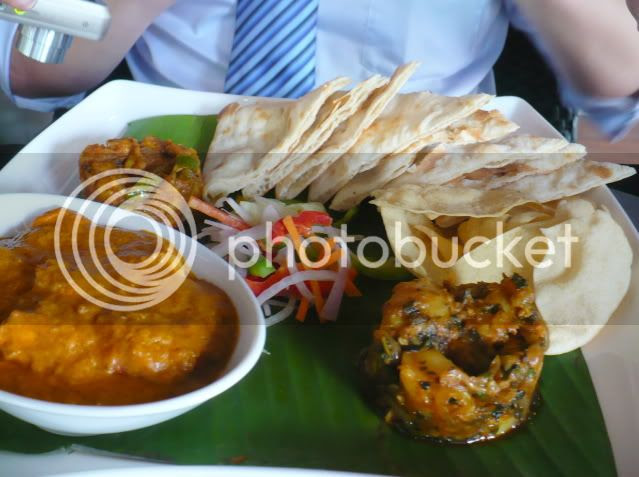 The chorizo and beef tripe stew which Sean ordered for us communally to try. Err, I won't bother ordering that again. 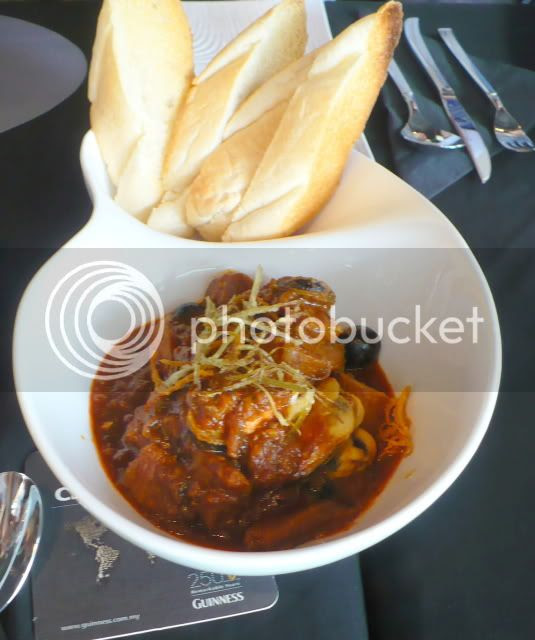 Ms Fit's mango salad. Can't really go wrong here, unless your ingredients were off, but I think they looked acceptable. 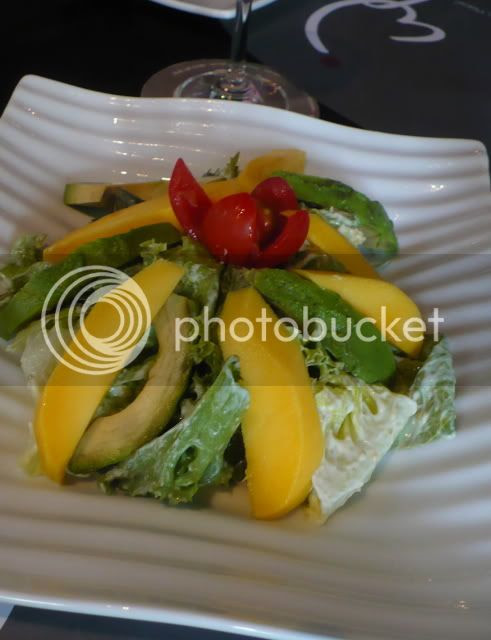 Anyway, whatever it is, it was eclipsed totally by THIS.

Their Espetadas or something that sounds like it. Looked attractive and delicious, but alas, fell FAR short of expectation. The seafood was tough and rubbery, and the beef was nothing to shout about. To top it all, it was RM85 for the beef skewer and RM75 for the seafood one. 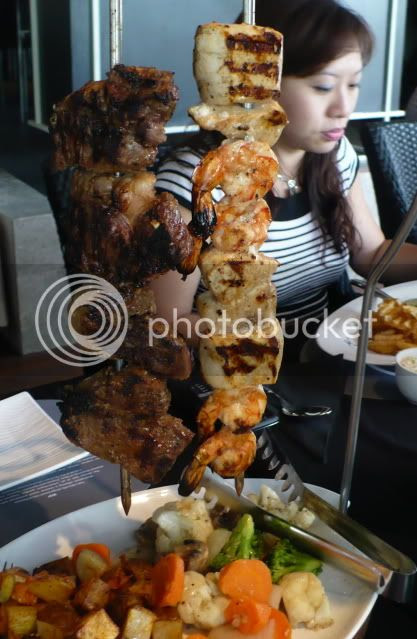 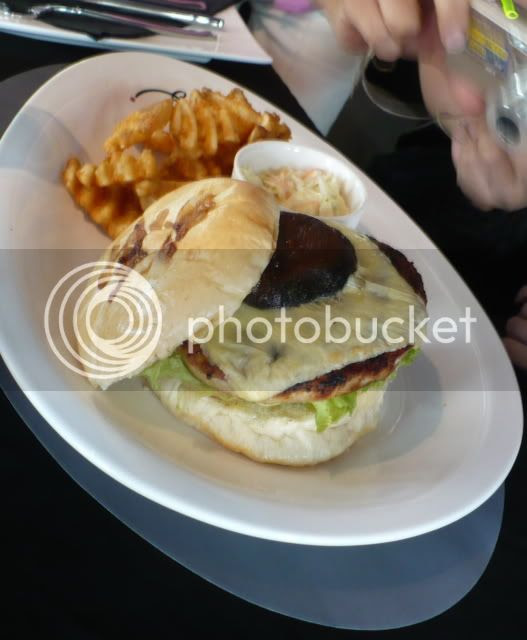 WIP Burger...I didnt hear any complaints nor compliments, so I'm guessing it was okay. 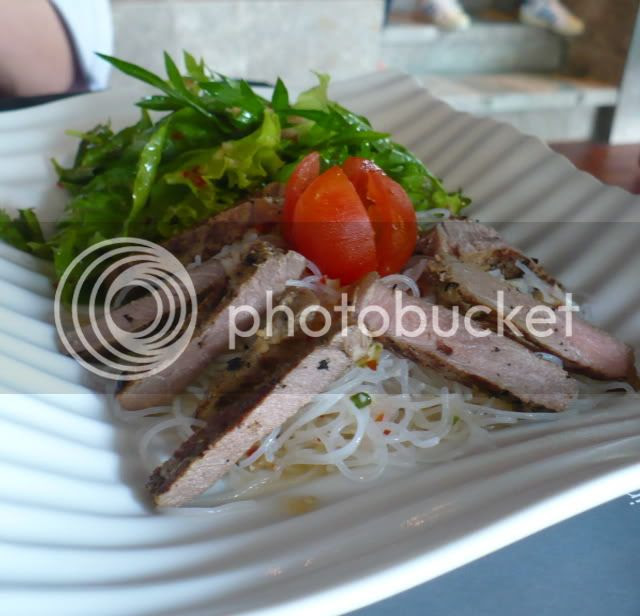 Qwazymonkey's 1st take at the thai beef noodle salad was .....SALT LICK SALT LICK. Very very salty. However, credit where it's due, the staff were very attentive, and did try to rectify it by replacing it with another less salty version. 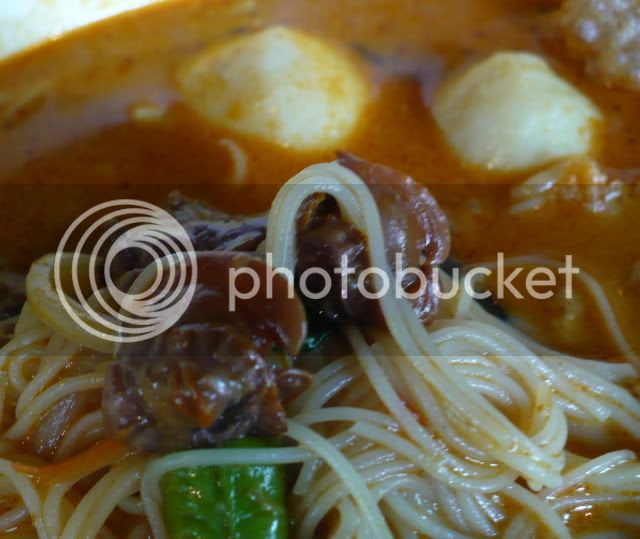 Ah, my cockles and balls. Lovely. 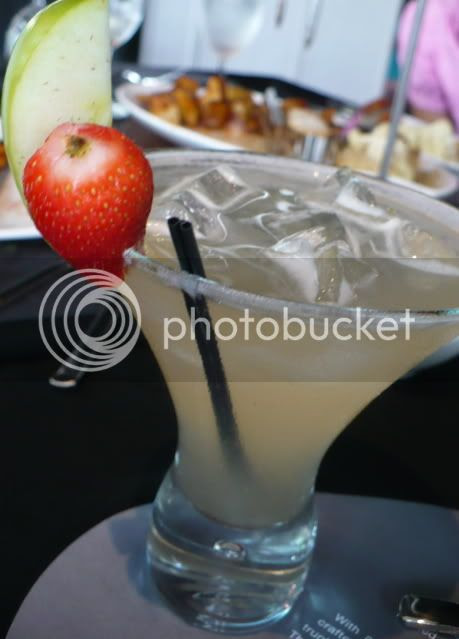 Ciki and Sean have no qualms about knocking back a few in the noon day. I might have, on a Friday, but on a Monday? Hmmm, ....they do have a spectacular range of cocktails available, and quite reasonably priced as well, especially if at happy hour rates. The first few were sent back because they were tastelss (ie, cant taste the booze), but the bartender eventually got it right. 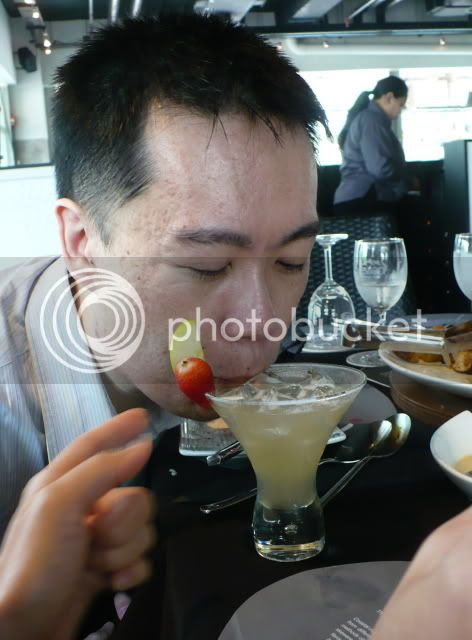 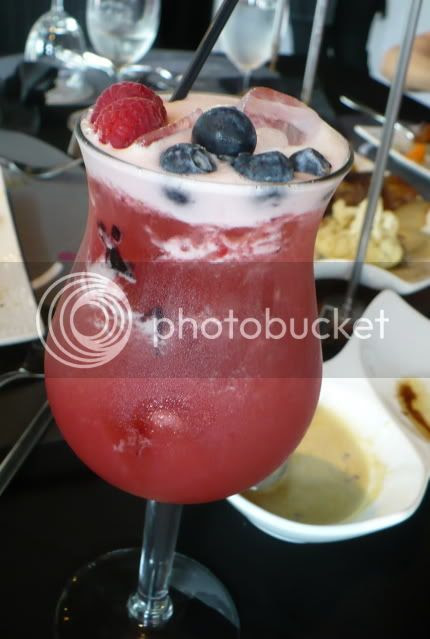 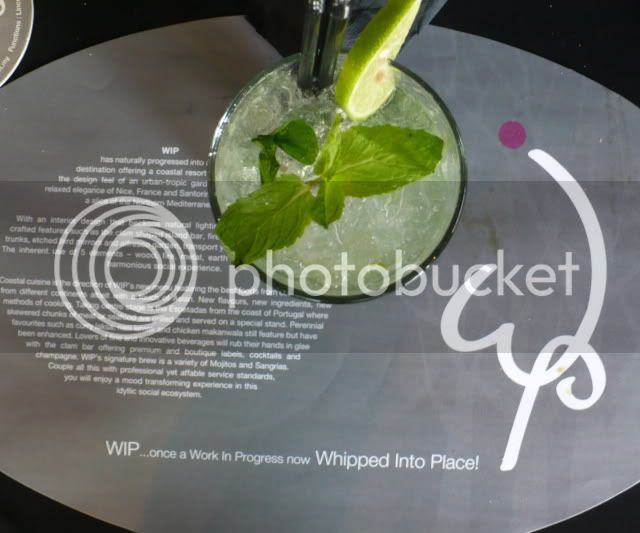 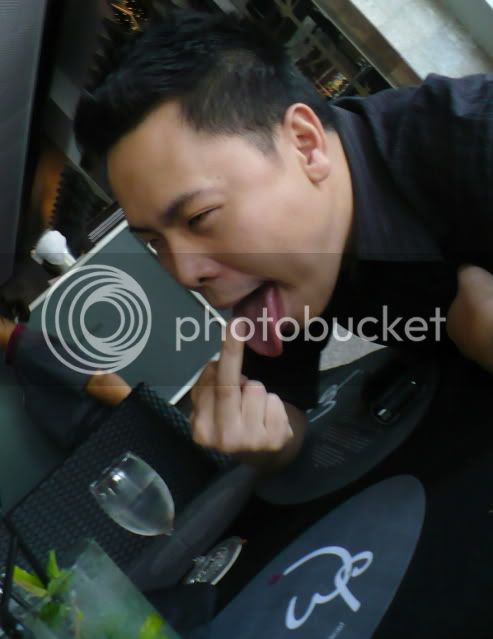 Aiyo, not so bad la. Okay, plus points. Generally, the service and ambience is pretty good. I guess maybe it was due to their teething problems, as the place did just reopen. Looks like a great place to hangout for happy hour drinks though. 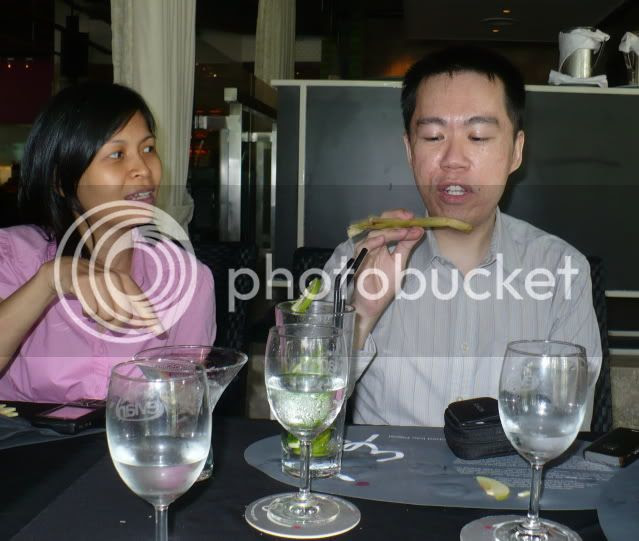 Strange conversations:
Sean: Is there any particular dish that you must try before you die?
Group: Not really
Sean: I'd like to try human flesh....
[Pregnant Pause]
Me: So ah, of all the people here, {ciki too boney, me too fatty}, who would you like to consume ah?
Sean: Qwazey monkey [without batting an eyelid]
Monkey: [under his breath]...Ah pa, help.

Those who stayed on decided to traipse on to Teuscher chocolates for dessert. 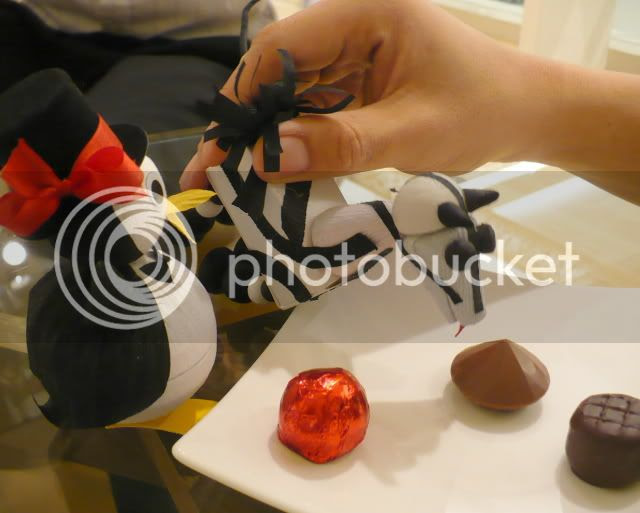 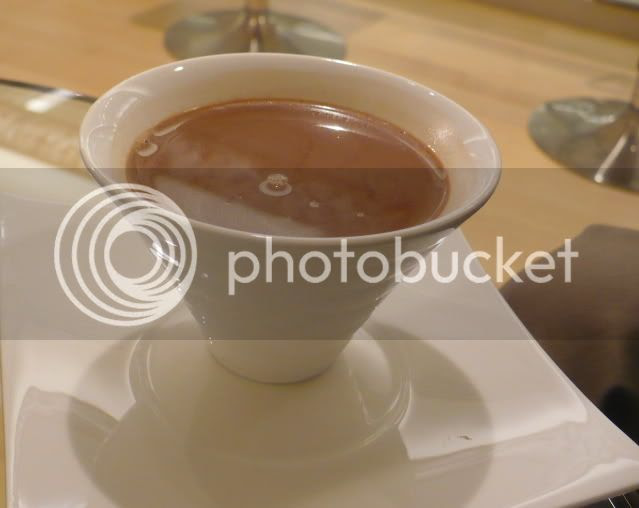 Who said diamonds are a girl's best friend. Since I only looked, and not touch, I can't really say much about this part of the meal. Suffice to say, the three who partook look decidedly satisfied. 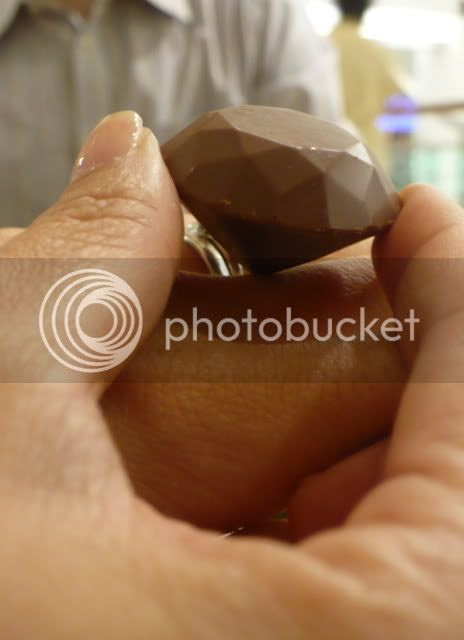 I shall just order the cockles then, can ah? ;-)

As for acronyms, why don't we JV and open up a place called WTF?

I'll cook, and you'll do desserts. Once I serve them the unimaginably horrid chow with unidentifiable stuff in it, the patrons will say, "What the Fxxx?".

Then you'll bring out your cakes and they'll say "Wow! That's Fabulous!".

i would hav nvr guessed that the 2 sticks of meat/seafood costs rm160!!

reminded me of the news bout that Indonesia (was it?) guy who ate a corpse, recently.

so few cockles ar? now i feel bad for stealing three tiny ones from you.
luckily my boss doesn't read food blogs. what an incriminating photo for a workday lunch!

Qmunkey's face.. too farnee ! WIP is gonna kill u 4dis:P
and the "human flesh" conversation.. i didnt even hv to dare you to write it... hahaahaha

PA, i LOVE your suggestion of WTF! i recommend LL to be fotographer where u can get chor face watermarked onto a WTF poster immediately. Hairyberry can sing(live stage performance)! I will erm,l serve food (like a waitress) and Qmunkey can help:P
Boo can be PR and marketing!

CY> How lah liddat? If poor Monkey is ever found dead with a chunk missing from his thigh then you will have to testify in court....

LOL at Paranoid Android's comment. If you are hiring for WTF, can I be the bartender? If the customers complain too much, i'll send their drinks back with a little extra sumthin' sumthin' Hahahaha...

Hmmm..Food that bad huh? *strikes off list of places to try*

the cockles and balls arrangement looked very abstract la. i wonder what the beehoon represents.

cant wait to hear what qwazymonkey has to say about that gesture oso.

I'm not letting my kids go anywhere near your blog.

One word... hilarious!! I'm sure that I won't stop laughing if I were there :) darn farney lah you all!
I agree that unka should be the bartender.. definitely a crowd puller.. mostly gays... oppss... guys!! LOL...
Ya loh... you too fat, ciki too skinny... qwazymonkey is just right. ROFL!

Cocktails at Monday lunch??? Ciki & Sean, you guys are my HEEEEROESSS!! And WTF sounds like the place to be! Quick get a move on it before one of those F&B conglomerates hijack the idea!

loving Paranoid Android's idea. lolx. can i be the crumbs sweeper? :P

After reading this post, I can see myself dying in two possible scenarios. Either I'll be poisoned to death by the WIP folks for that finger in throat pic or I'll be eaten alive by our resident Hannibal Lecter. Either way, it's not a happy ending. So if you don't hear from me in the next few days, u know who to look for.

Can imagine how rowdy your lunch had been. Bet WIP had no inkling you guys did not enjoy the food at all. Real funny post with even funnier comments.

tummythoz, it wasn't all bad la. my curry laksa, minus the chicken, was good ma.

qwazymonkey, aiya, TNG good buddy buddy with the owner of WIP. It's constructive criticism la. oh, and i hereby acknowledge that finger in tongue photo WAS taken out of context. i cant remember what it was about.

550ml, i am so loving the name WTF! you're right, we should go register it.

thule, hahaha, i'll let unka kill you personally. but yeah, we had a great time.

THAMBY, you're pregnant??? CONGRATULATIONS!!!!! no wonder you havent been joining them for the lunchtime booze ups. I AM SOOO HAPPY FOR YOU!!!!!!!!! when are you popping?

hairy berry, i cant think anymore, after thamby's good news. i dunno what to say about the beehoon.

unka, i think maybe teething probs la, afterall, all their other outlets seem to be thriving.

J, choi choi choi....i;m sure if you cut off the correct part, wont die one la. afterall, vincent van gogh lived with one ear.

I'll be at their launch next week...hope it's a better experience than the one you had!

sean, nah, there were plenty of cockles to spare. dont feel bad.

j2kfm, i just heard on the news today of another nigerian politician who's been charged with cannibalism. maybe its the flavour of the month.

paranoid, you da man...everyone LOVES your suggestion. let's do it.

me too, must hv cockles in my curry laksa :p