Unbeknownst to many, right behind Menara Tan & Tan is one of KL's first, if not the first, condominium called Desa Kudalari.  Why Kudalari?  The young people of today might not know this, but the park, KLCC and its surrounds used to be the  grounds of the Selangor Turf Club, hence, Kuda Lari.  I think a lot of current day bloggers were not even born, when the Turf Club was torn down to make way for the KLCC project.  On the site of present day Menara Tan & Tan, I believe used to be a little Japanese restaurant, housed in a bungalow, called Edogin.  Gawd I am showing my age when I can regurgitate all these trivia of ancient KL.

I digress, as always, but what is life if not some digression.  I have never really been to Menara Tan & Tan, as there is no reason per se, so little did I realise there's actually quite a number of eateries here on the ground level.  And it is to one such eatery that I was invited to by Makan Fairy Godmother, on a leisurely Saturday morning, (which really wasn't so leisurely, as I had a frenetically busy morning and was rushing my behind off... "DOVER, MOVE YER BLOOOMING A***" comes to mind, since we are afterall in the area of what was the Ascot of KL).

Now if blogging were like essay writing, and if I was a student, I'd immediately get a fail, for in an essay apparently, if within the first paragraph, your readers do not know what the gist of the rest of the story is about, it's pronounced an abject failure.  How dull official writing is.  I could waffle on endlessly, waffles that would put A&W to shame, but I shall stop here.

Living Foods - ah, the very name sounded healthy, so much so I was tempted to have some Hokkien Mee for breakfast with extra lard, JUST in case....afterall, it is generally a cruel fact that healthy stuff is not delicious, and delicious stuff is not healthy.... BUT HOW APT, just look at their tagline!!! Took the words right out of my mouth, and head. Don't let the two chicks in the pic distract you from the tagline.  It was as if it was to pre empt any stereotyping of food. 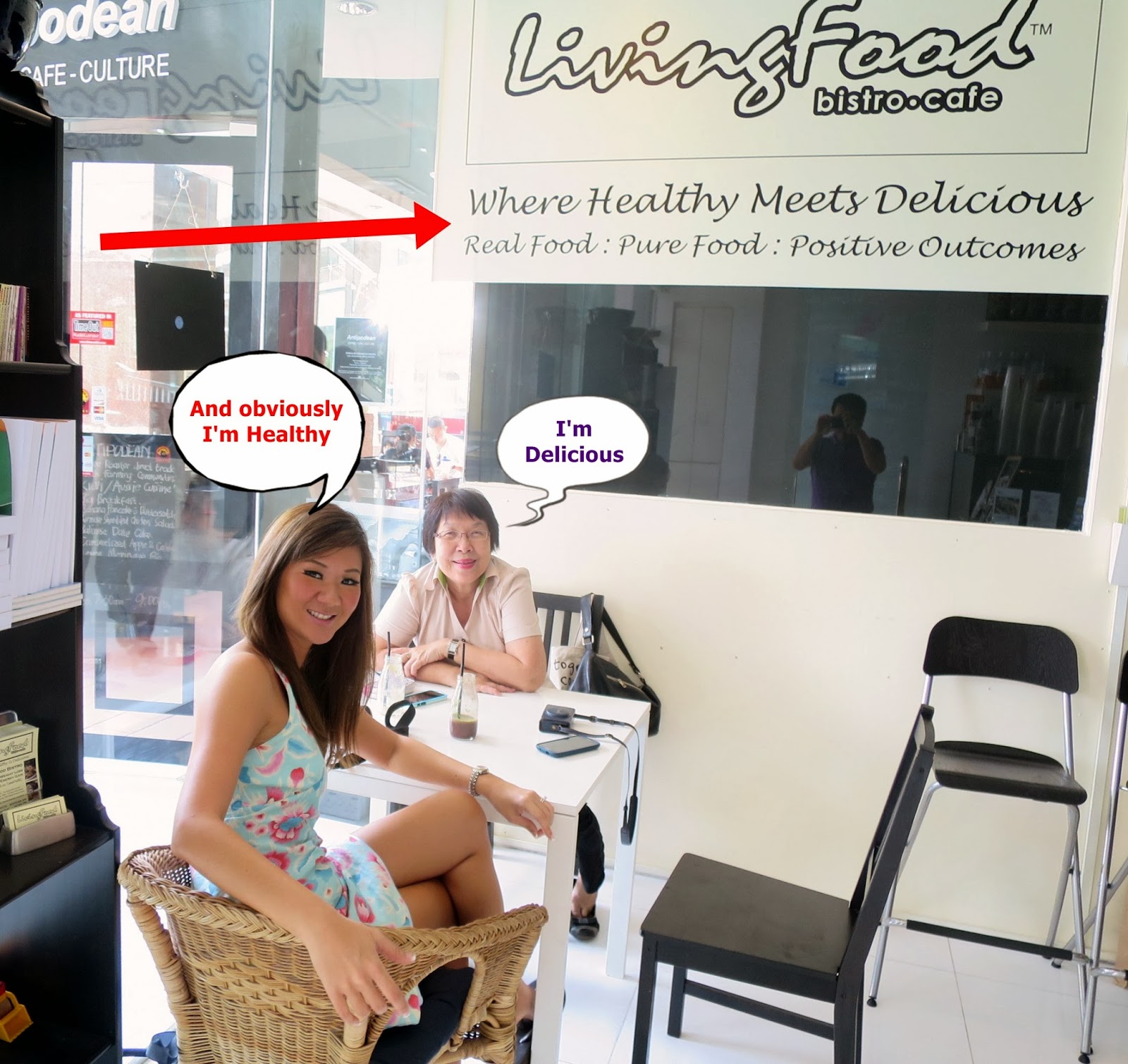 To read about the history and philosophy about Living Foods, check out Healthy's Post HERE.  But in a nutshell, (nuts are also healthy), its about eating healthily, with minimal cooking rather than  killing off all the nutrients with high heats, and basically to rethink the way we eat.  I'm sure it's all very scientific, and until man discovered fire, sometime back when I was err... two, maybe, mankind did presumably eat everything raw or sashimi-ed. 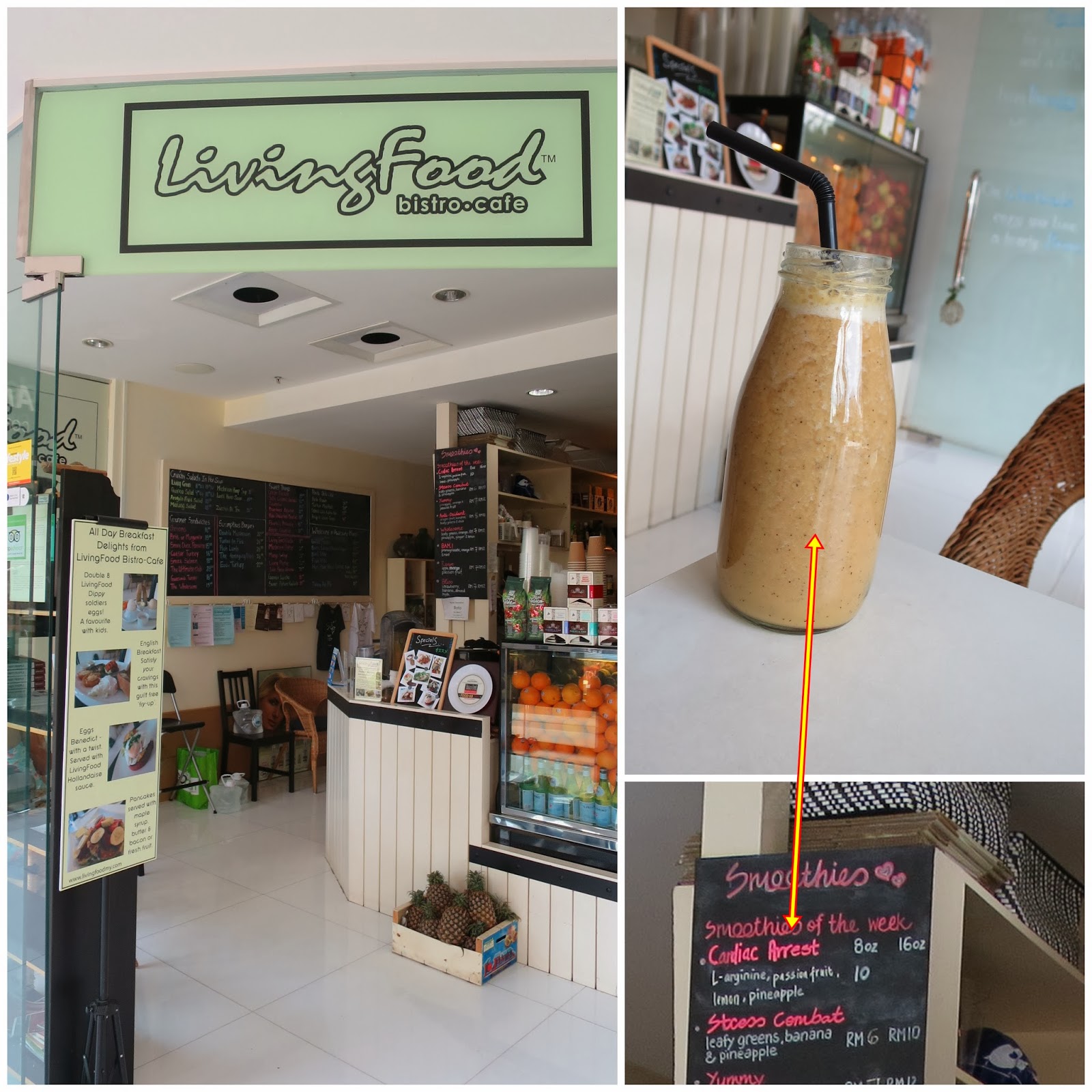 Makan Fairy Godmother suggested I try one of their smoothies, so in keeping with the frenetic pace of the Saturday, I went for the cardiac arrest, which presumably is for prevention rather than to get one.  L-Arginine, Passion Fruit, Lemon & Pineapple 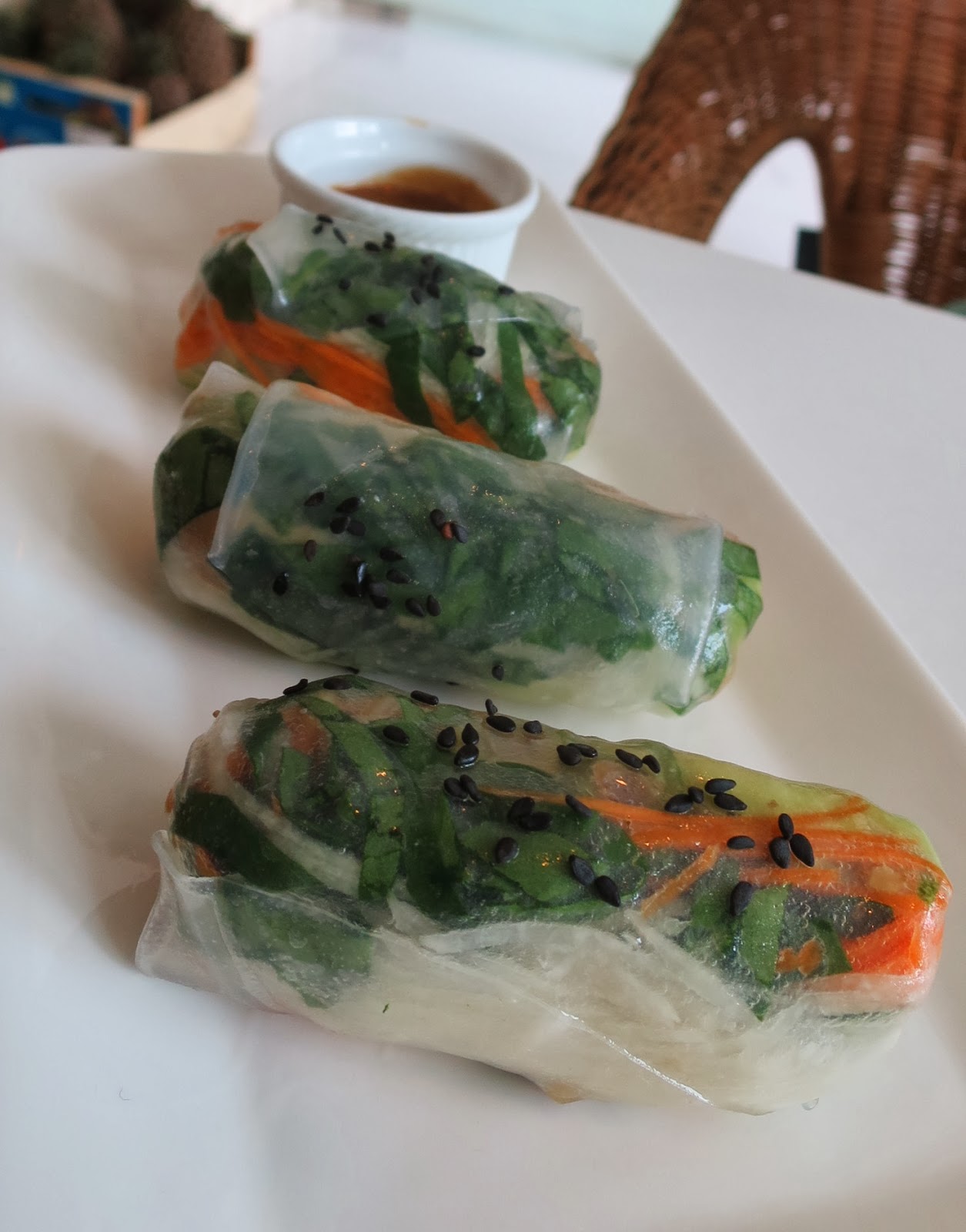 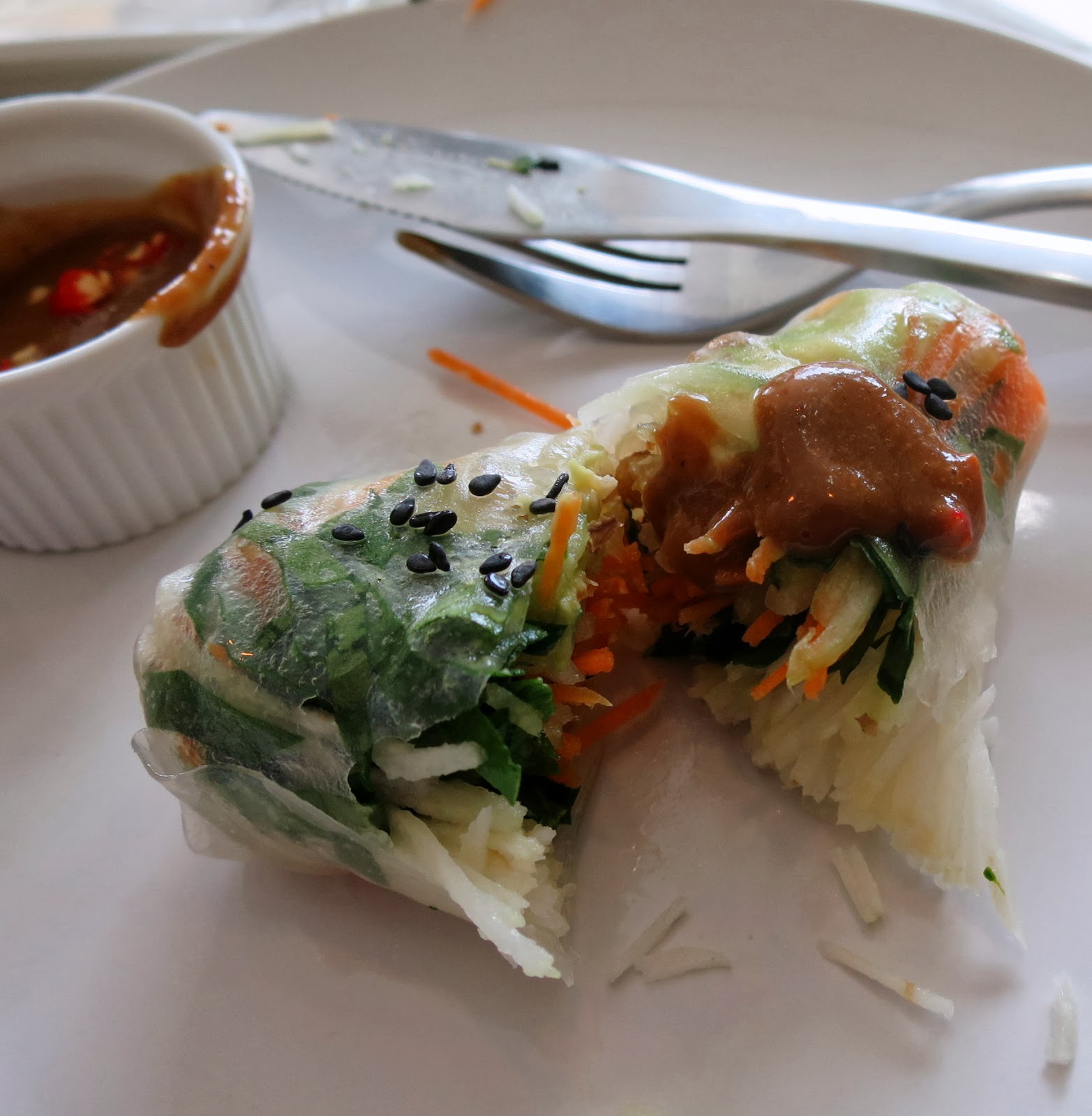 It really is as delicious as it is pretty, with all those colours.  I don't know where I read that you should aim to eat five different coloured vegetables and fruit daily, so there you go, one Ying Yang Roll and you've covered all your bases. 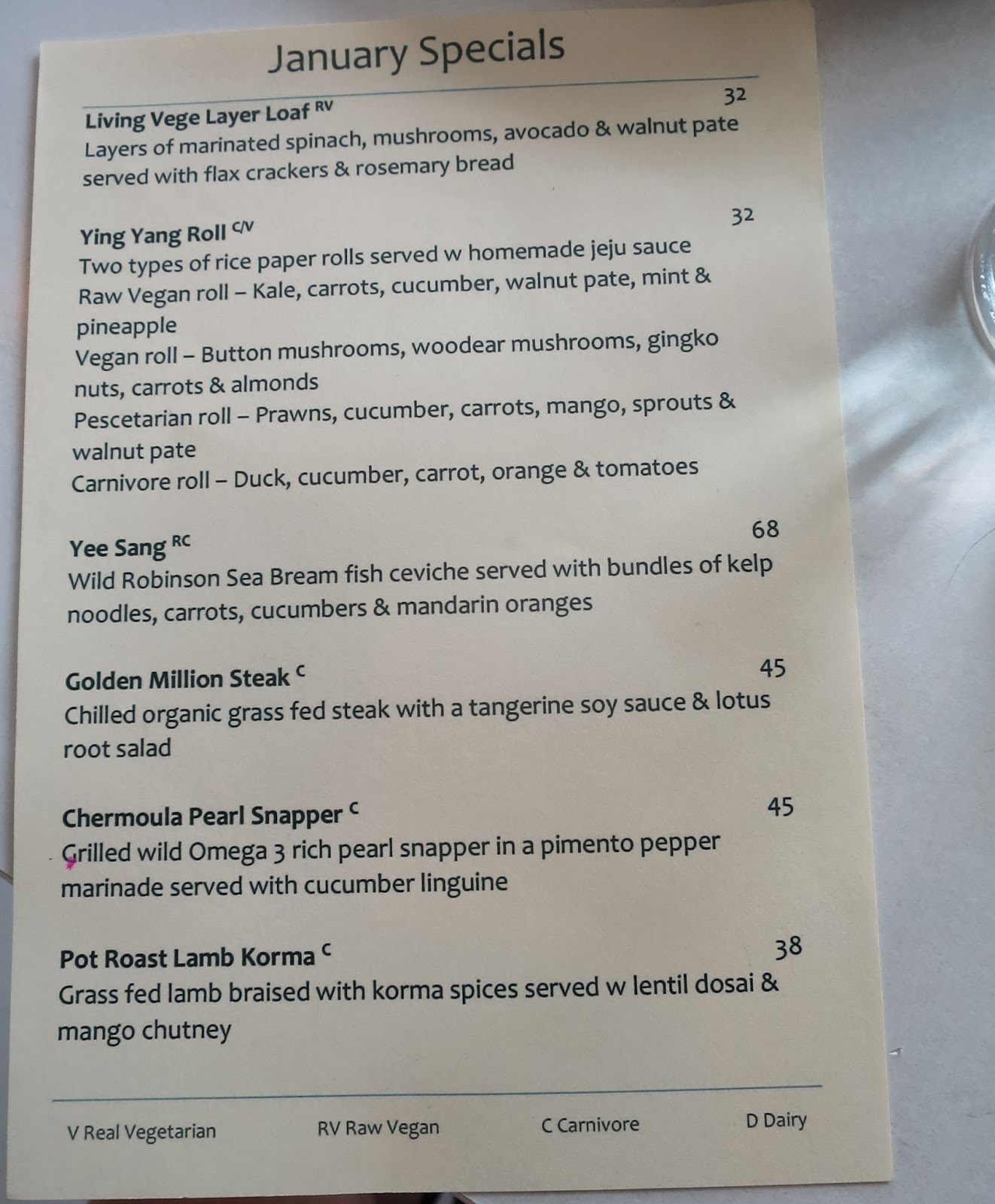 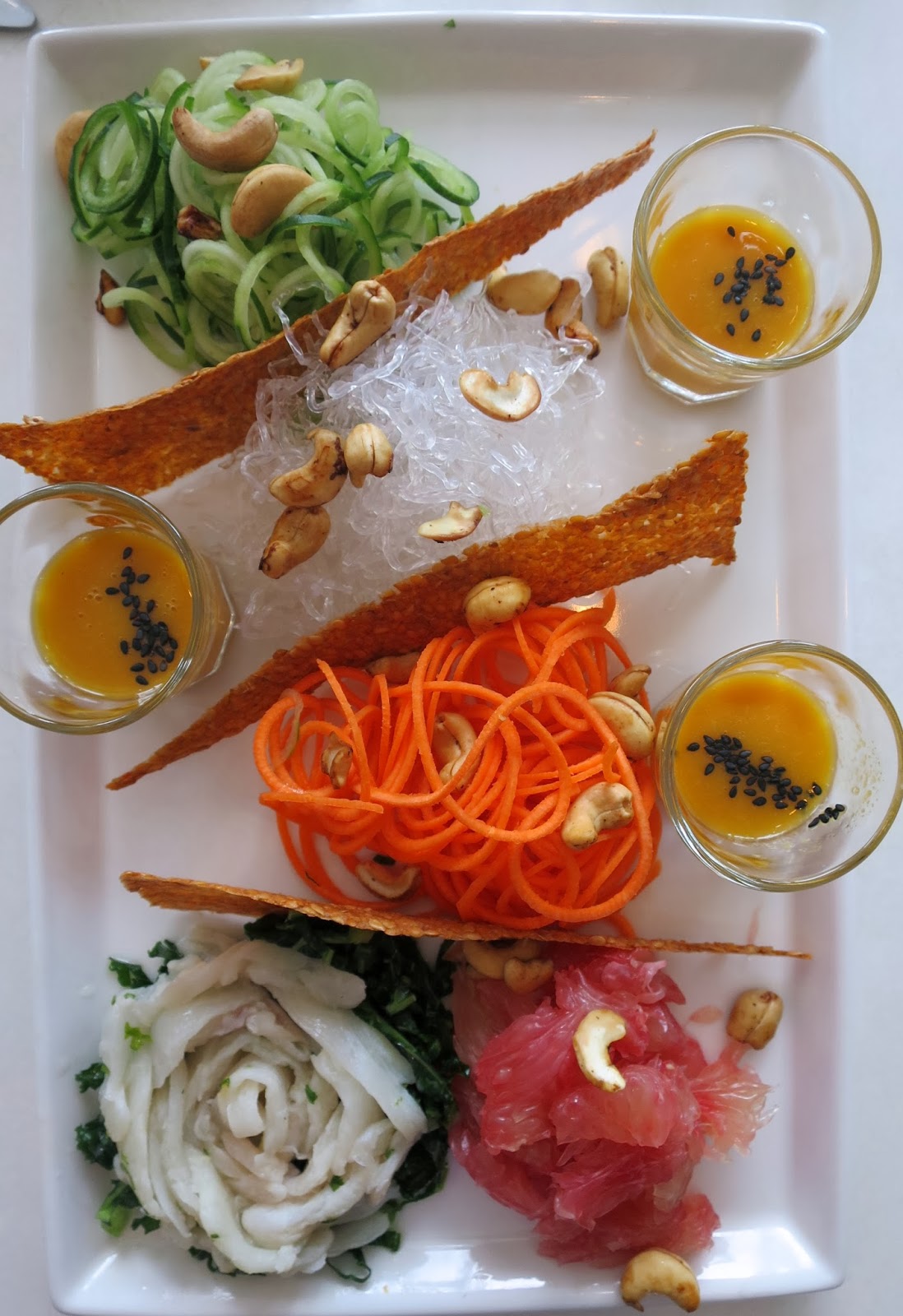 And the award for the most pretty looking Yu Sang for 2014 goes to....tah dah.... almost like an artist's canvas.  It looked too perfect to actually "lou hei", but in the interest of prosperity, we put our chopsticks together for the toss.  The fish is a Wild Robinson Sea Bream Ceviche, served with kelp noodles, carrots, pomelo, cucumber,  and a lovely mandarin sauce.  (as in Mandarin orange, not the language) 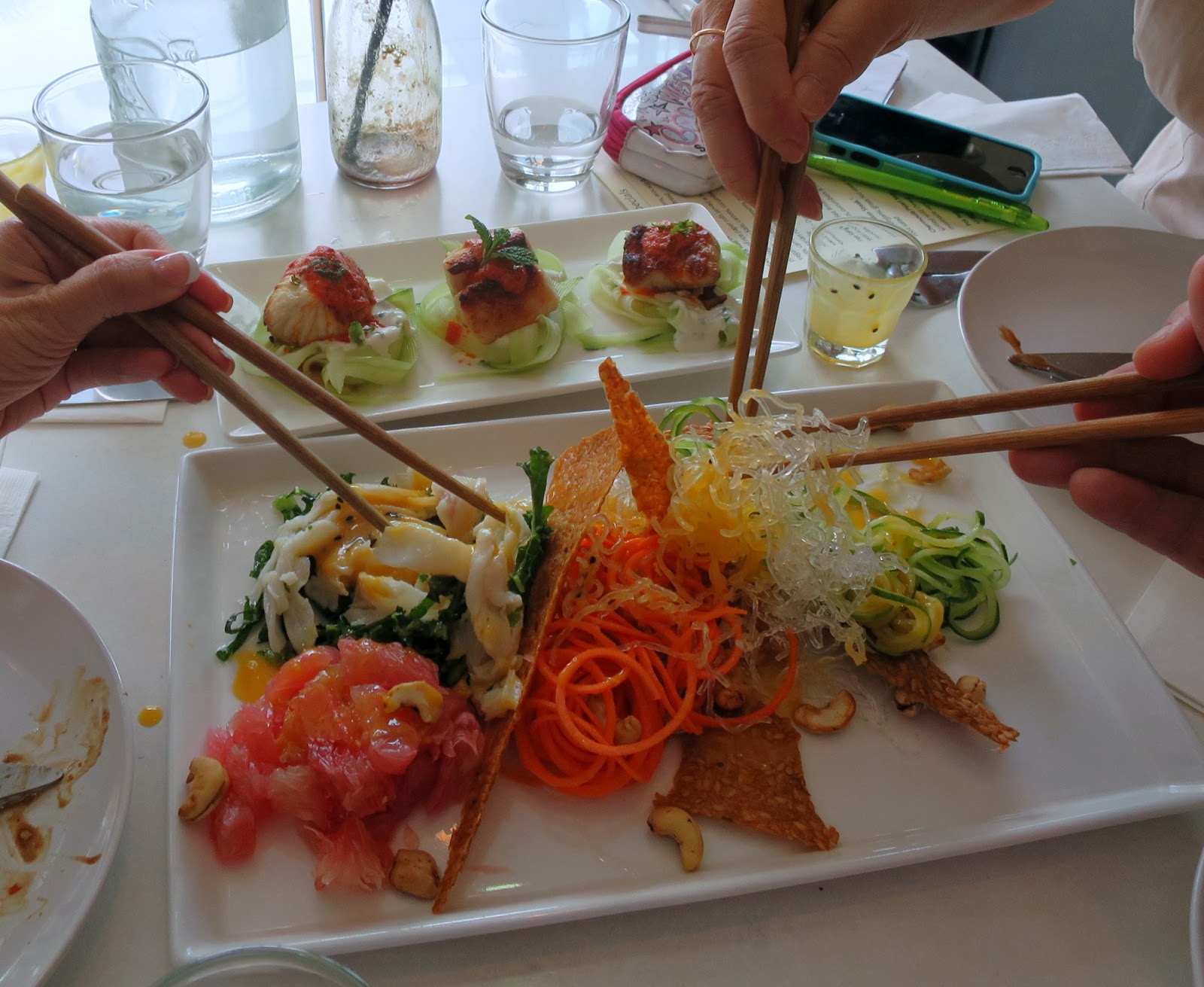 We toss our salad together gether. 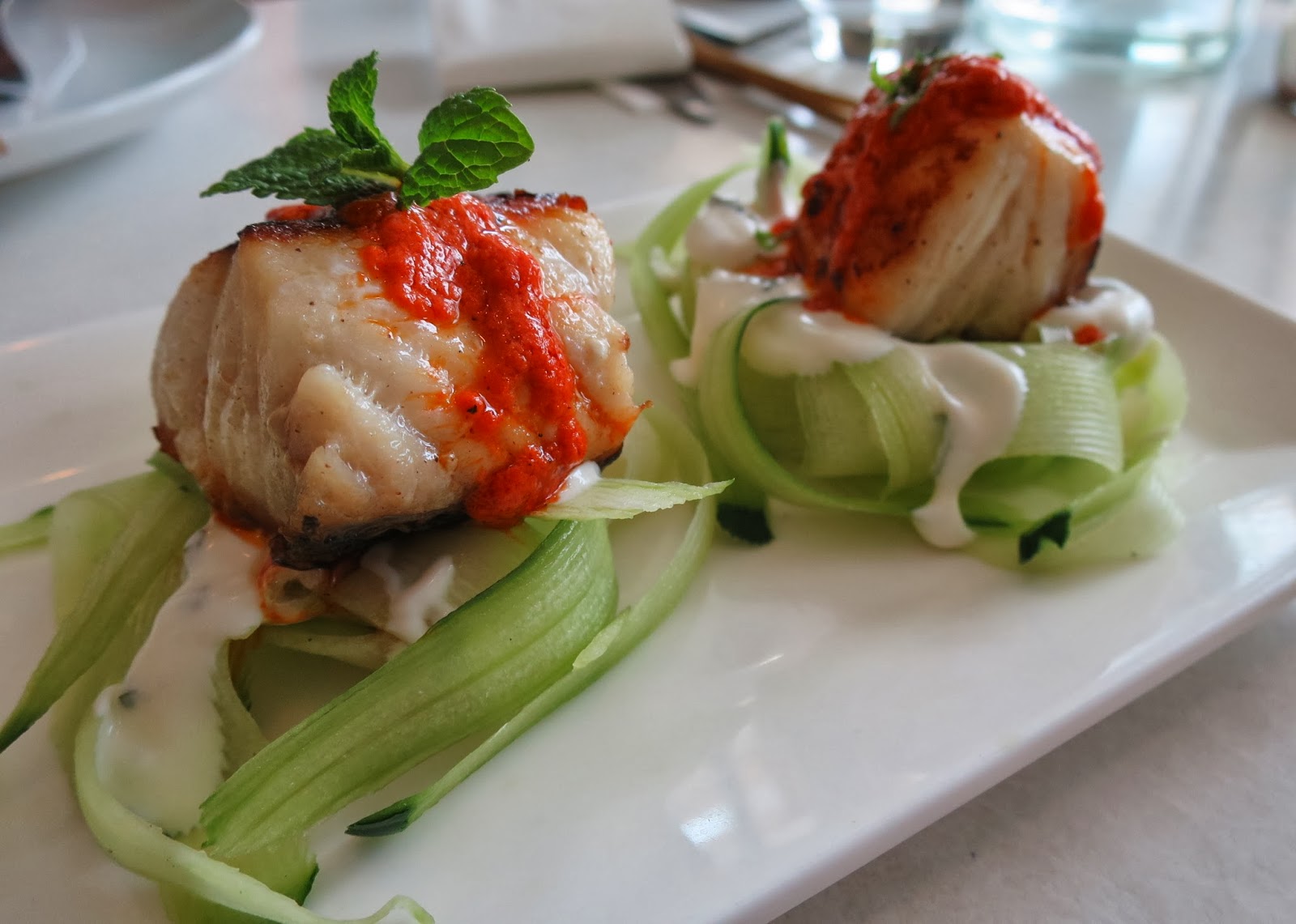 Chermoula Pearl Snapper (all these fish varieties I have hitherto unheard, sigh, how suaku), with Omega 3, a cucumber linguine, and a lovely pimento pepper marinade.  Seriously, it was VERY VERY GOOD.  I could quite easily become pescatarian after partaking in such lovely marine offerings. RM45. 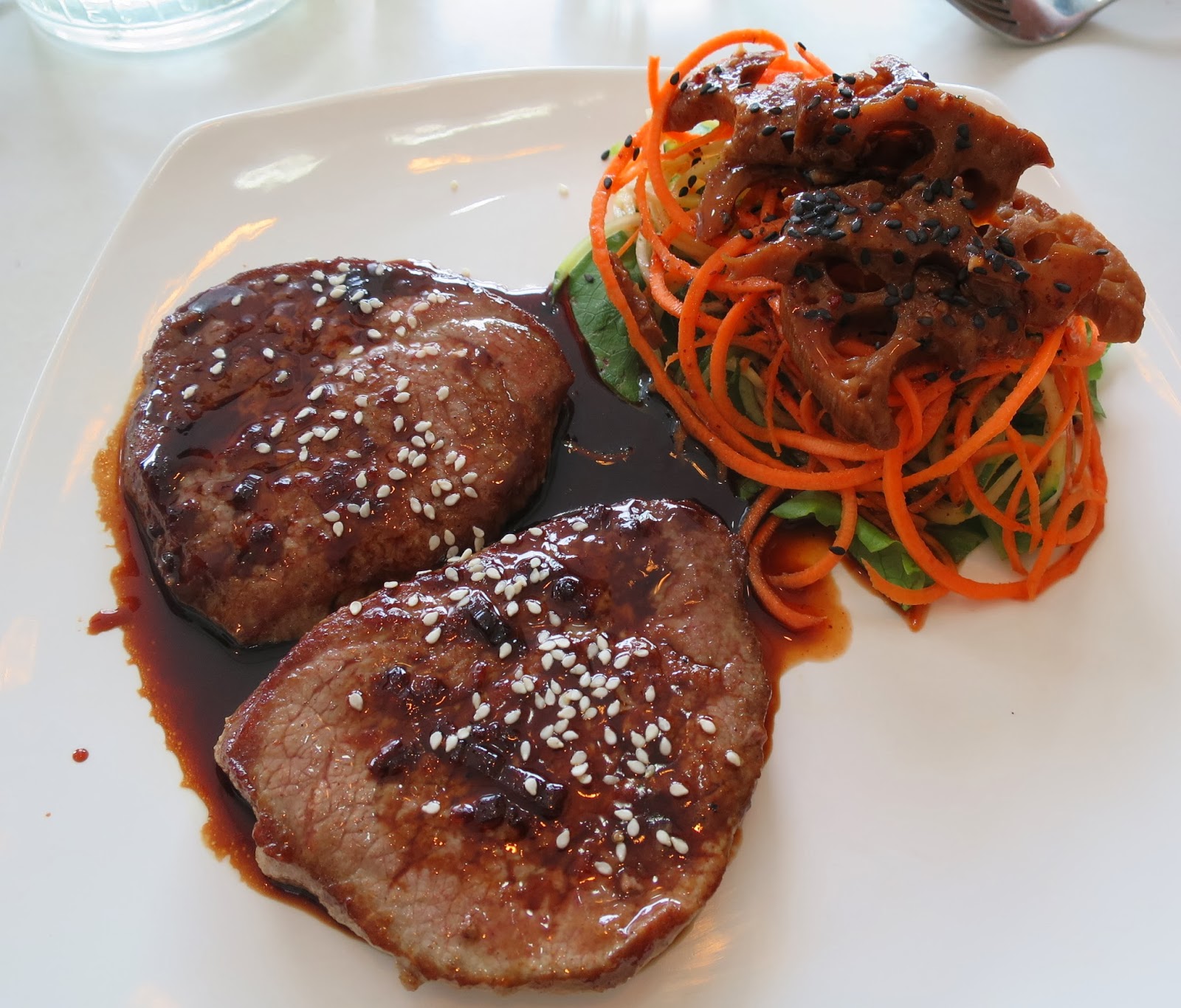 Golden Million Steak - Chilled Organic Grass Fed Steak (yeah, I've been reading about Grass Fed Vs Corn Fed, apparently the latter is unnatural so not good), with tangerine soy sauce and lotus root salad.  RM45.  Yippee dee doo dah, so one CAN have steak and still be in that healthy category.  It was delicious too.  No kidding. 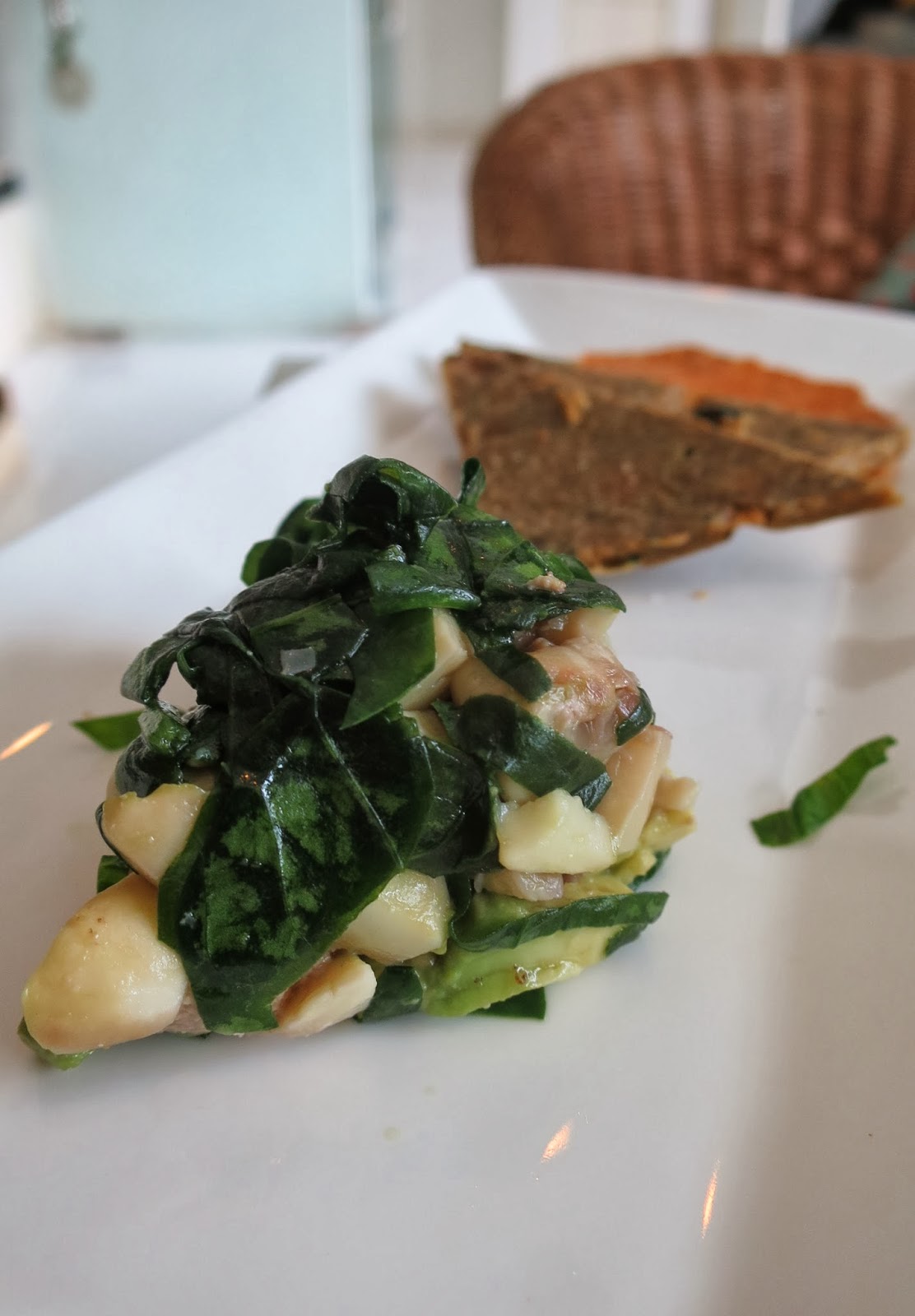 Living Vege Layer Loaf, spinach, mushroom and avocado paste lovingly layered served with flax crackers and rosemary bread (which I personally didn't care much for).  Loved the loaf though, but then again, with avocado, half the battle is won.  It's like the wagyu equivalent for vegetables. 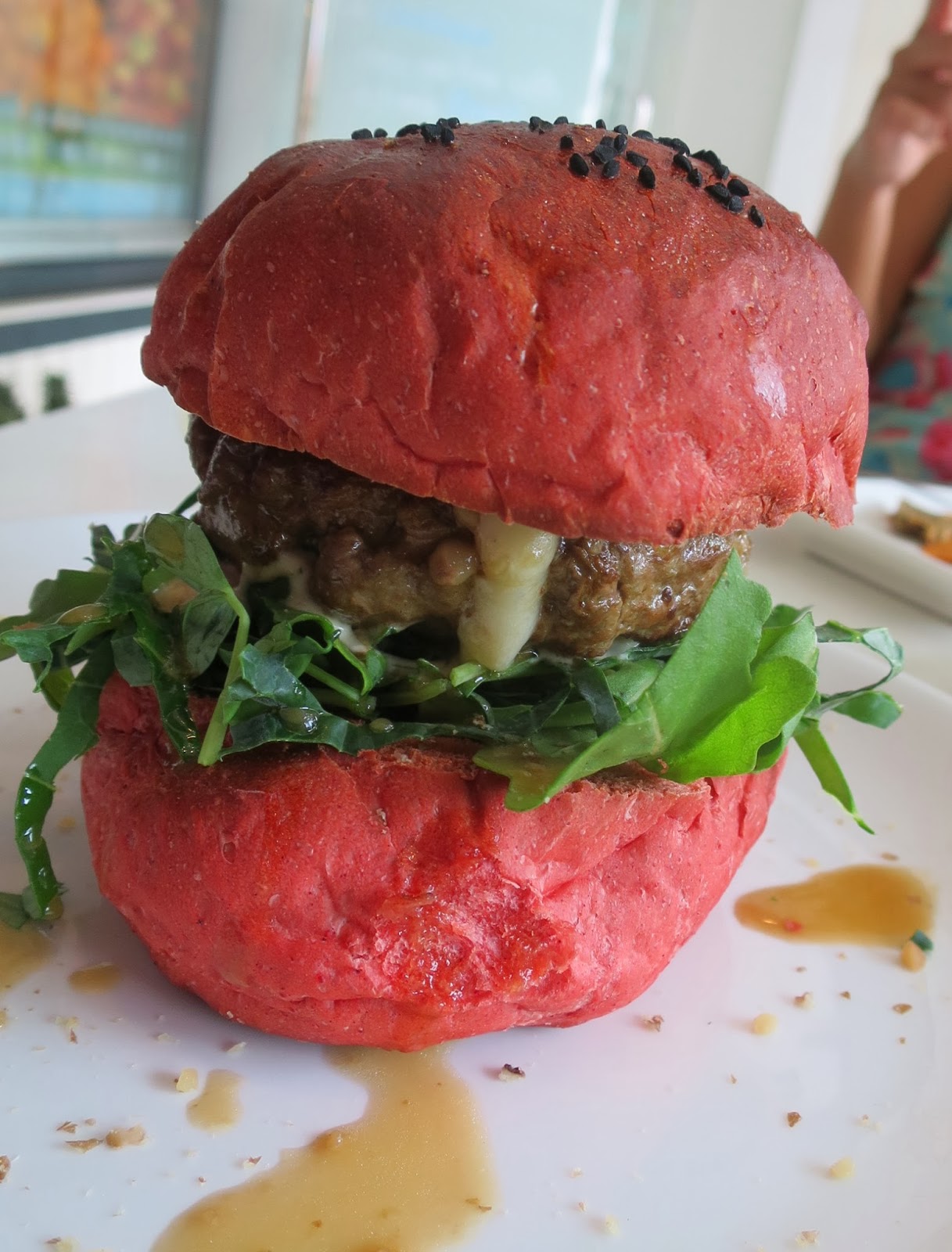 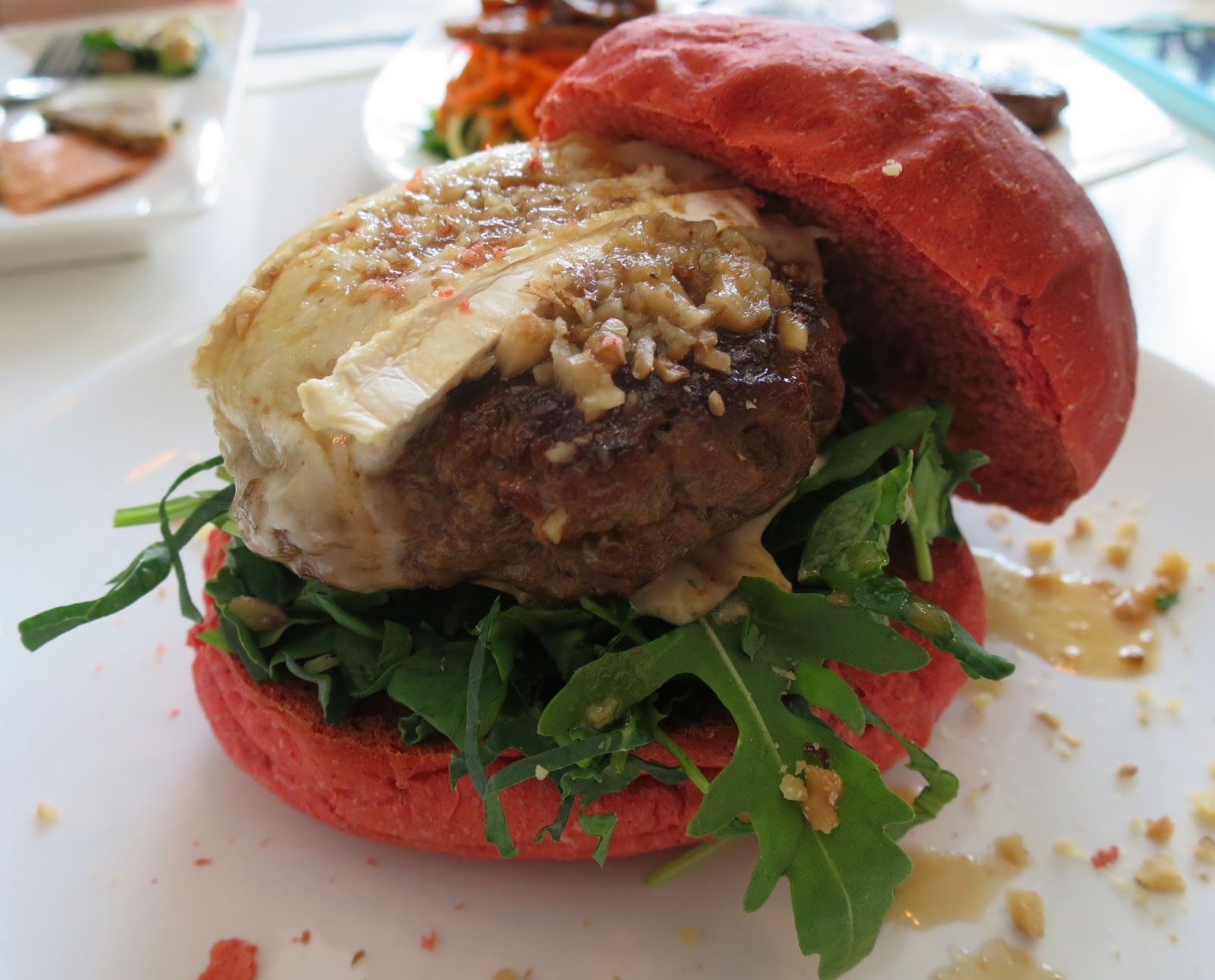 Posh Lamb Burger with A Red Yeast Rice Bun ..I'm not sure I could pick up any distinct taste from the red yeast rice, but it was a lovely bun regardless.  And the lamb patty was cooked just right, and I am not even a lamb fan.  As red yeast rice is supposed to combat cholesterol, I guess this dish is kind of "self medicating" so to speak. 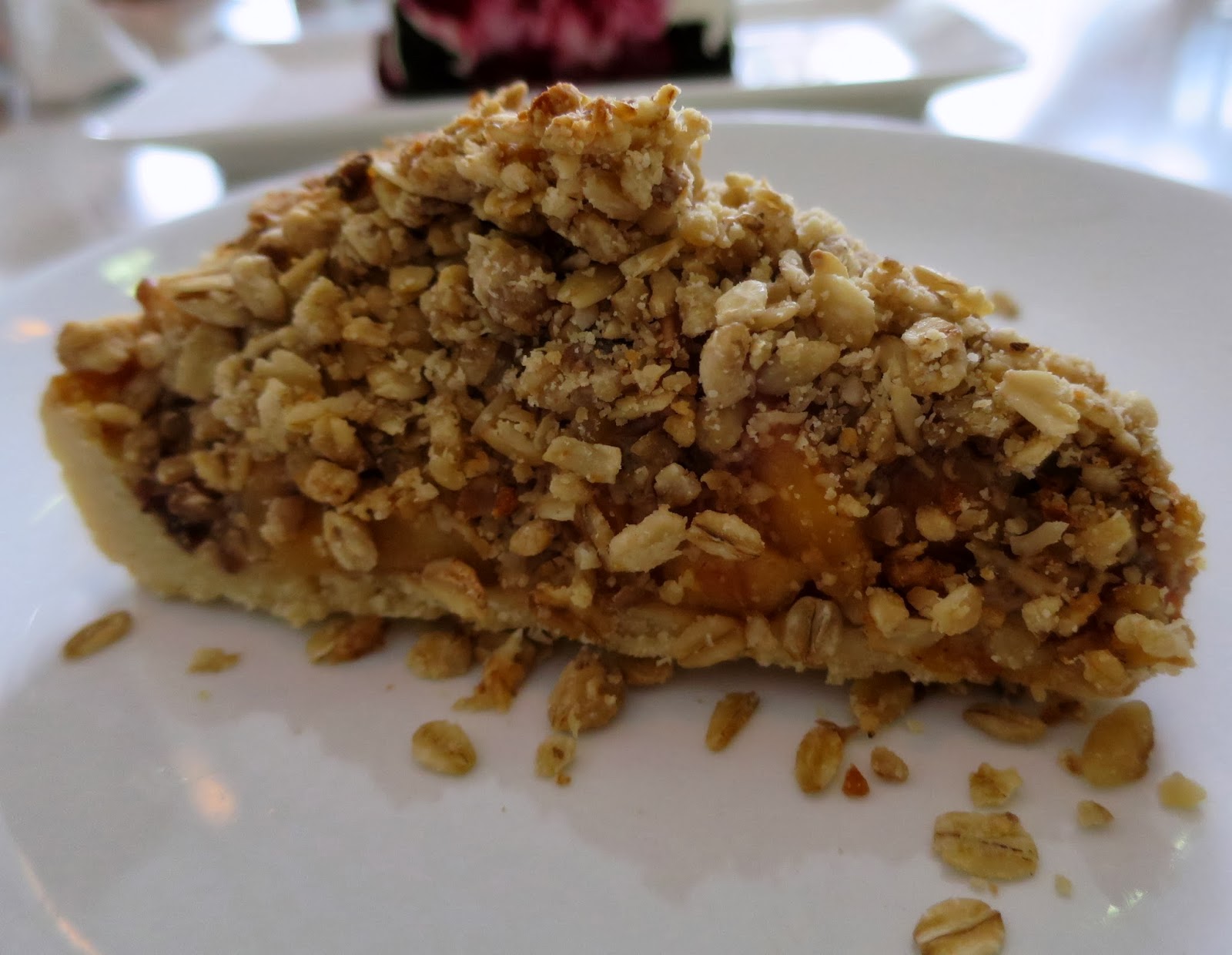 Now WHO would have thought that desserts would feature so prominently in the menu of a cafe that promotes healthy eating and living?  And even more surprising, who thought that desserts could be healthy AND delicious?  I seriously LOVED this apple crumble.  The apple still had some body to it, not all mushed up and disintergrated, and the crumble felt like a healthy breakfast of muesli. 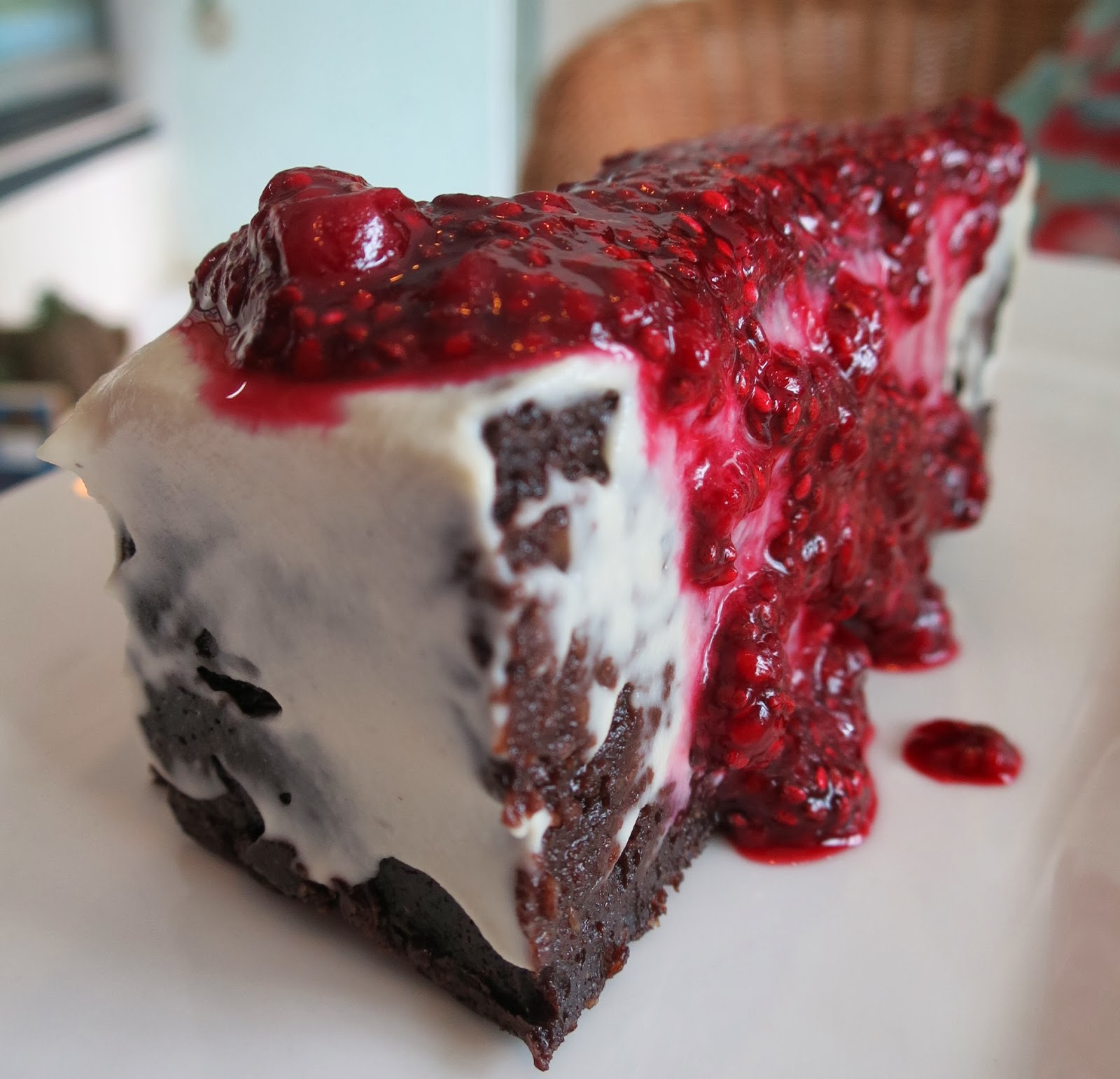 Their very popular blackforest brownie, a no bake brownie with a luscious crimson berry  coulis, the combination of which is quite heavenly.  I want to come back and try the other desserts, especially the salty caramel gateau. 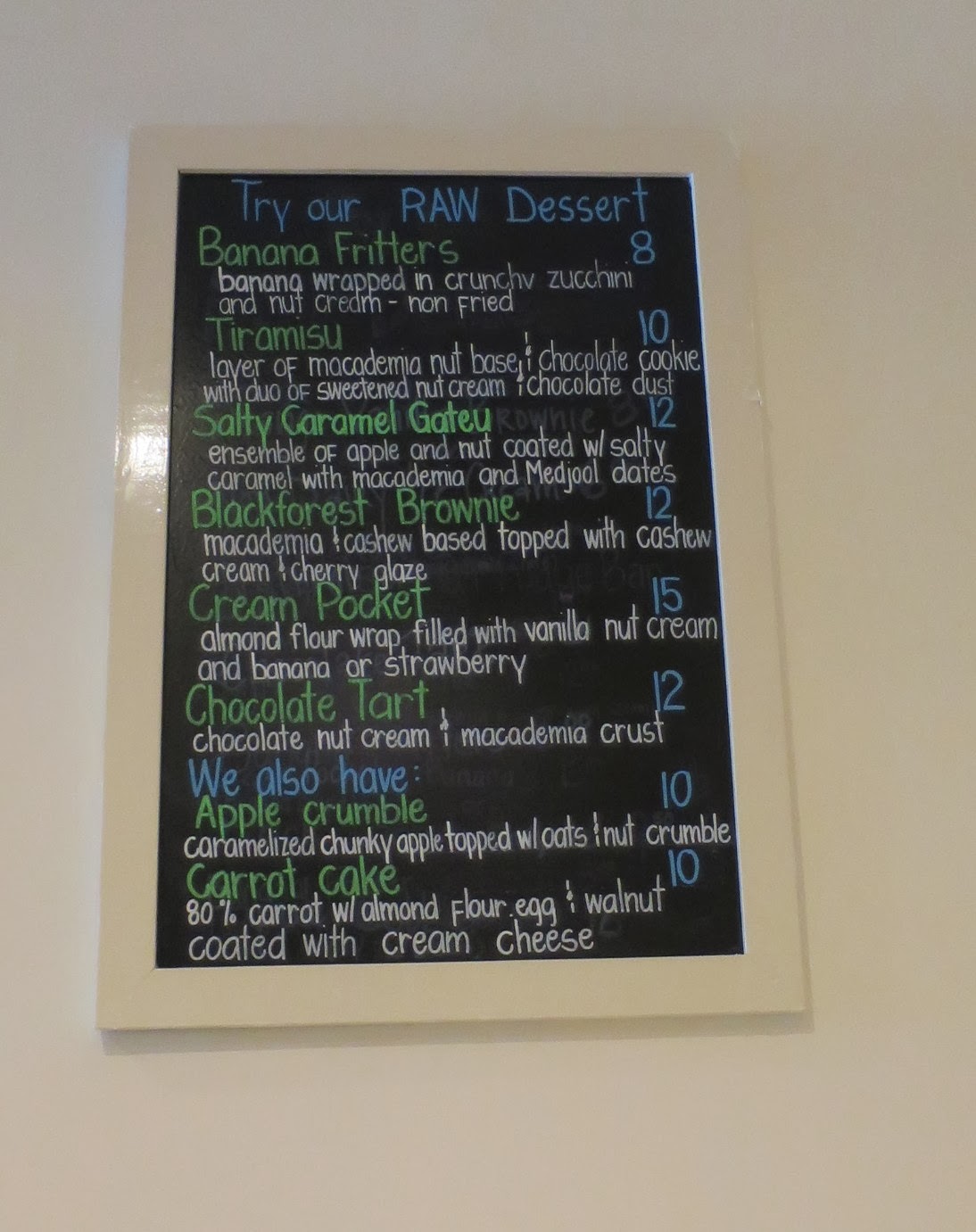 The good news is, they'll be opening soon near me, in Bangsar Baru.  Salty Caramel Gateau, here I come.

*chuckles* thank God for Fairy Makan godma... she waves her wand and voila! FOOD! ... and great food at that! yay! Bangsar here I come too.. can't wait for LF to open - can do my hair and eat good food all at once!

Being also of the 'healthy' kind, this is one of my favourite places in the city. The Salted Caramel Gateau is incredibly delicious. Hope you get to try it soon.

For someone who's extra sensitive to KL traffic lately, the new outlet in Bangsar (Baru? What is old Bangsar then? My KL geography obviously still sucks) is such a good news for me. Happy Horsey Year!