New Formosa, Not So New, But Always Fresh and Good.

Much as I love New Formosa, being invited there around Chinese New Year always seems bittersweet, because it reminds me of the speedy passage of time, and in retrospect, how little one has accomplished in that one year.  Forgive me if I whine, this is my first post of 2014, (as in, the first post of the first dinner invitation of 2014).  I read the previous post http://fatboyrecipes.blogspot.com/2013/02/new-formosa-for-chinese-new-year.html and sigh in nostalgia.

But okay, enough of the maudlin...it is ALWAYS a pleasure, on the other hand, to receive invitations from Makan Fairy Godmother, and always a pleasure to meet Jeannie Lee, the owner of New Formosa who never seems to age.  This time round, we were privileged to try their new menu, and yeah, looking back at my previous post, none of the familiar dishes were served this round. 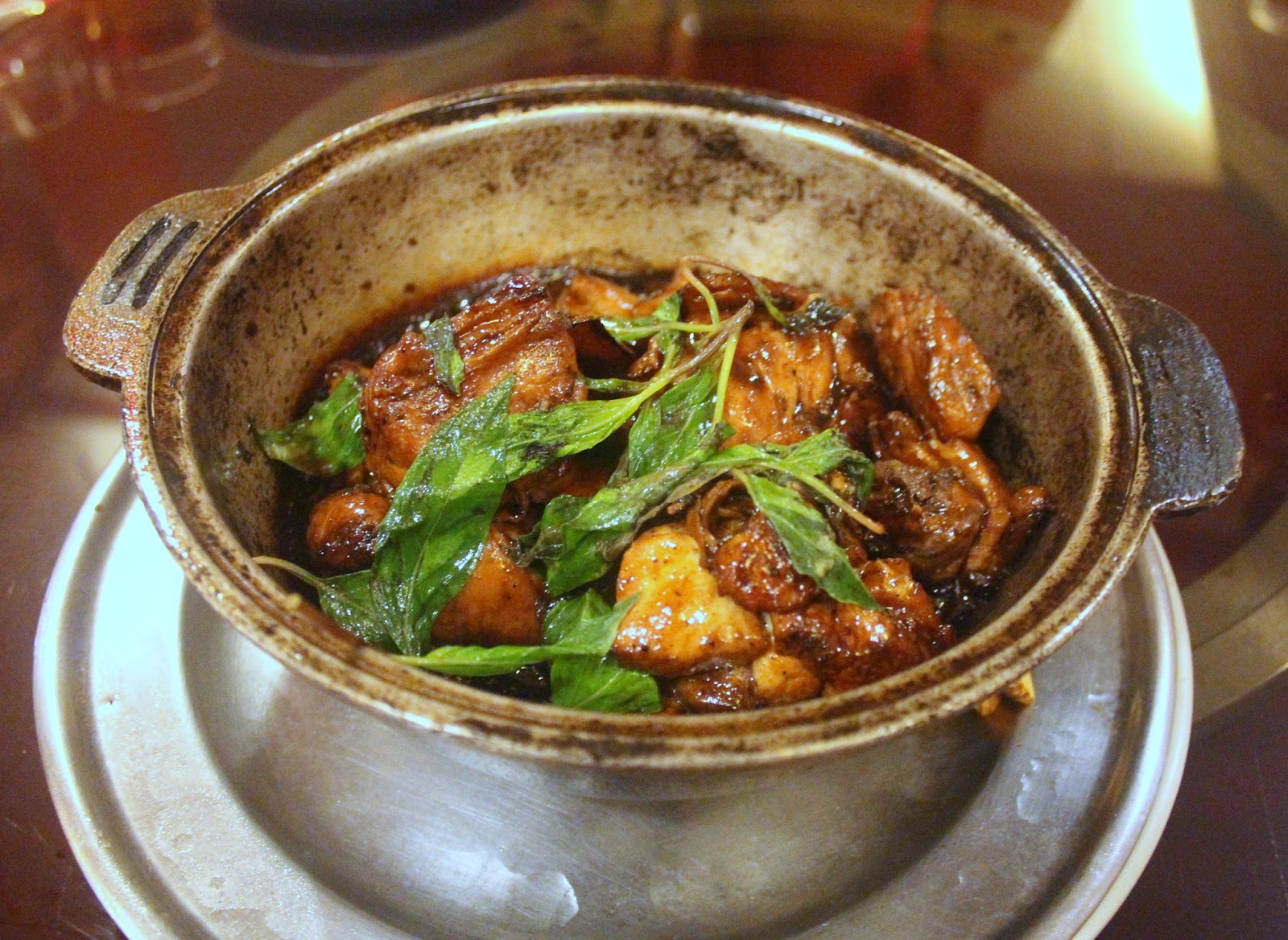 The first dish that came was the famous taiwanese 3 cup chicken.  As it turns out, apparently that dish was sent to us by mistake.  A serendipitous one for us, as this claypot dish was delicious.  Chock full of flavours, I wondered what the "three cups" of special ingredients were.  Thanks to the fount of wisdom, CC Foodtravel, my fellow eating companion, it comprises sesame oil, chinese rice wine and soya sauce.  Cheh, so simple. 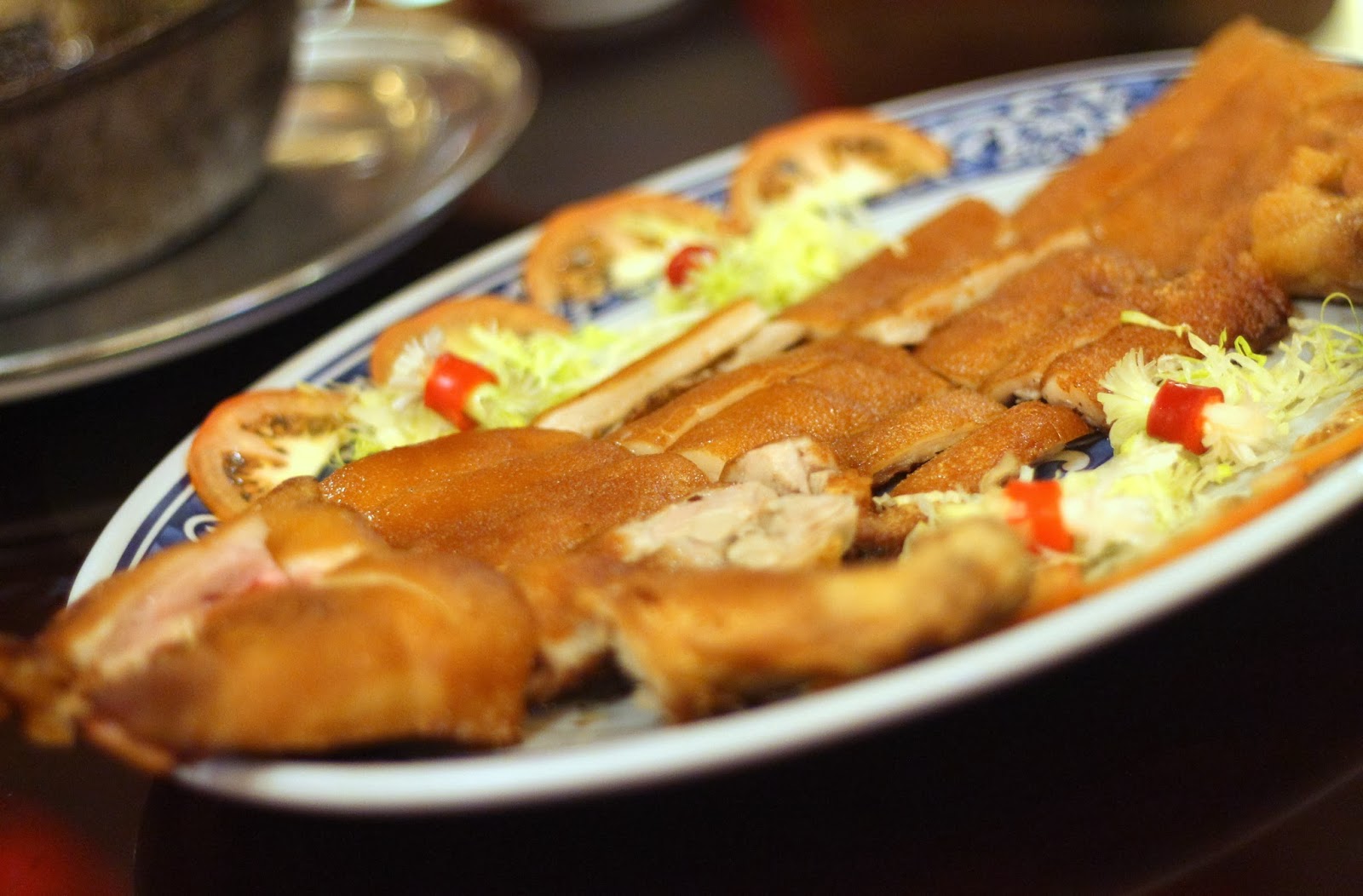 Half a suckling roast pig, which is the first dish in the special menu at RM298++ for 5 people.  To have a roast suckling pig like this already makes the menu a no brainer, that it is truly value for money.  The skin is roasted to a crispy cracking, and the piglet, well, must have been a rather meaty infant.  Lovely melt in the mouth meat. 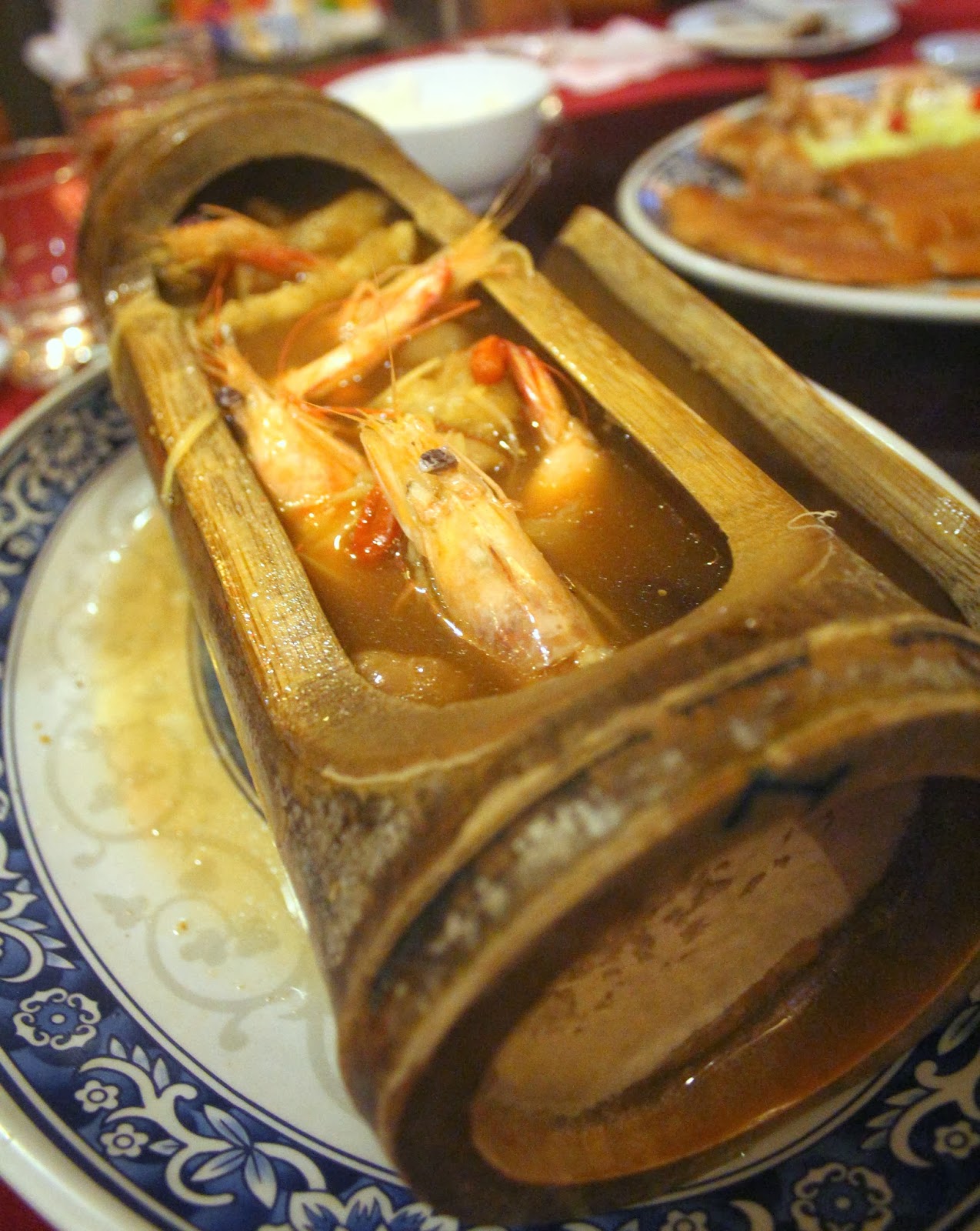 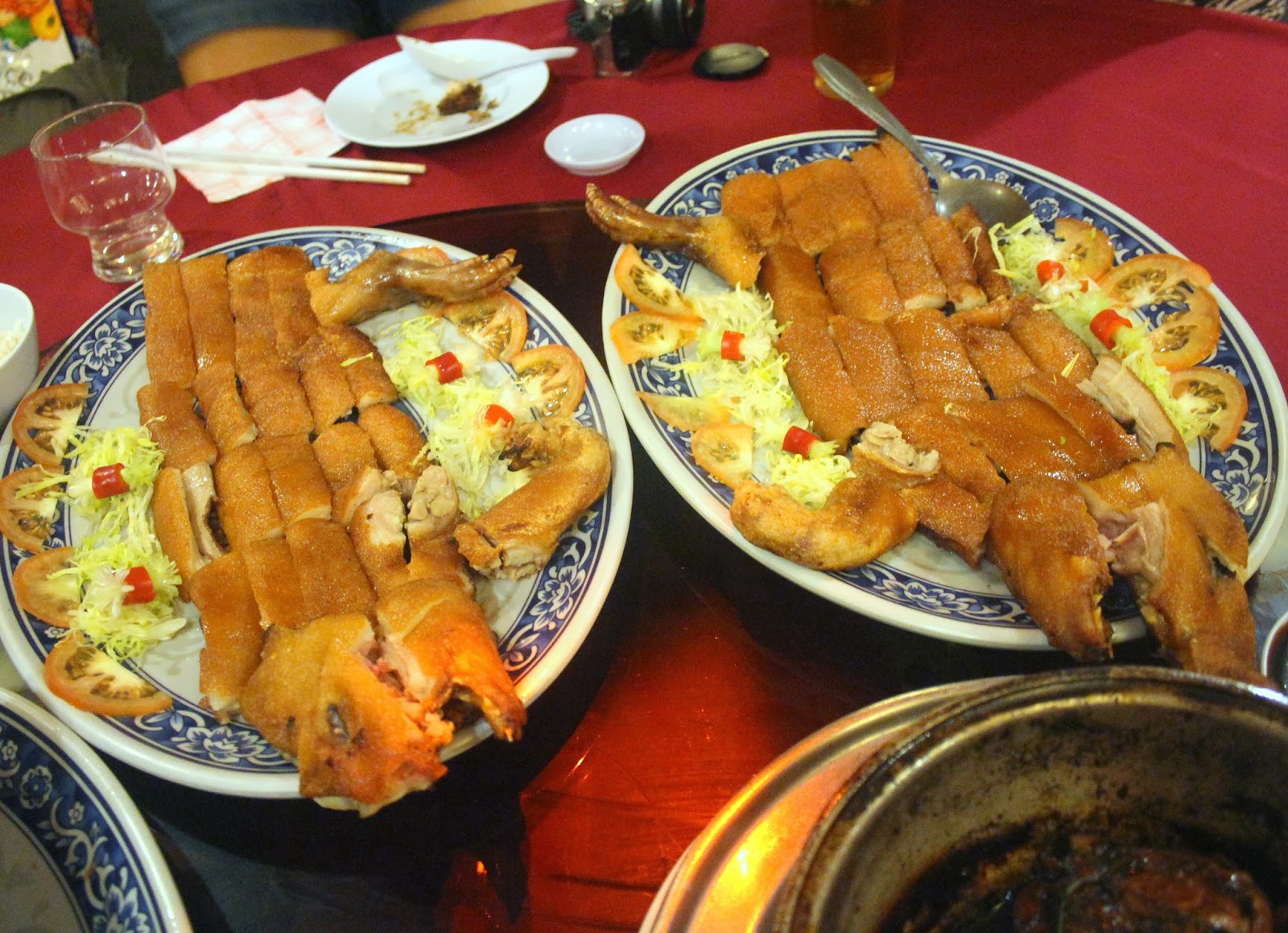 Jeannie was worried that we didn't have enough pig, and gave us two halves, which in this case, looked more than a whole.  Seeing as to how I was the only male at the table, and the other chicks eat like birds, (and I don't mean ostriches or vultures), needless to say, the other half was totally unnecessary. (as in, the other half of the pig, not "MY" the other half). 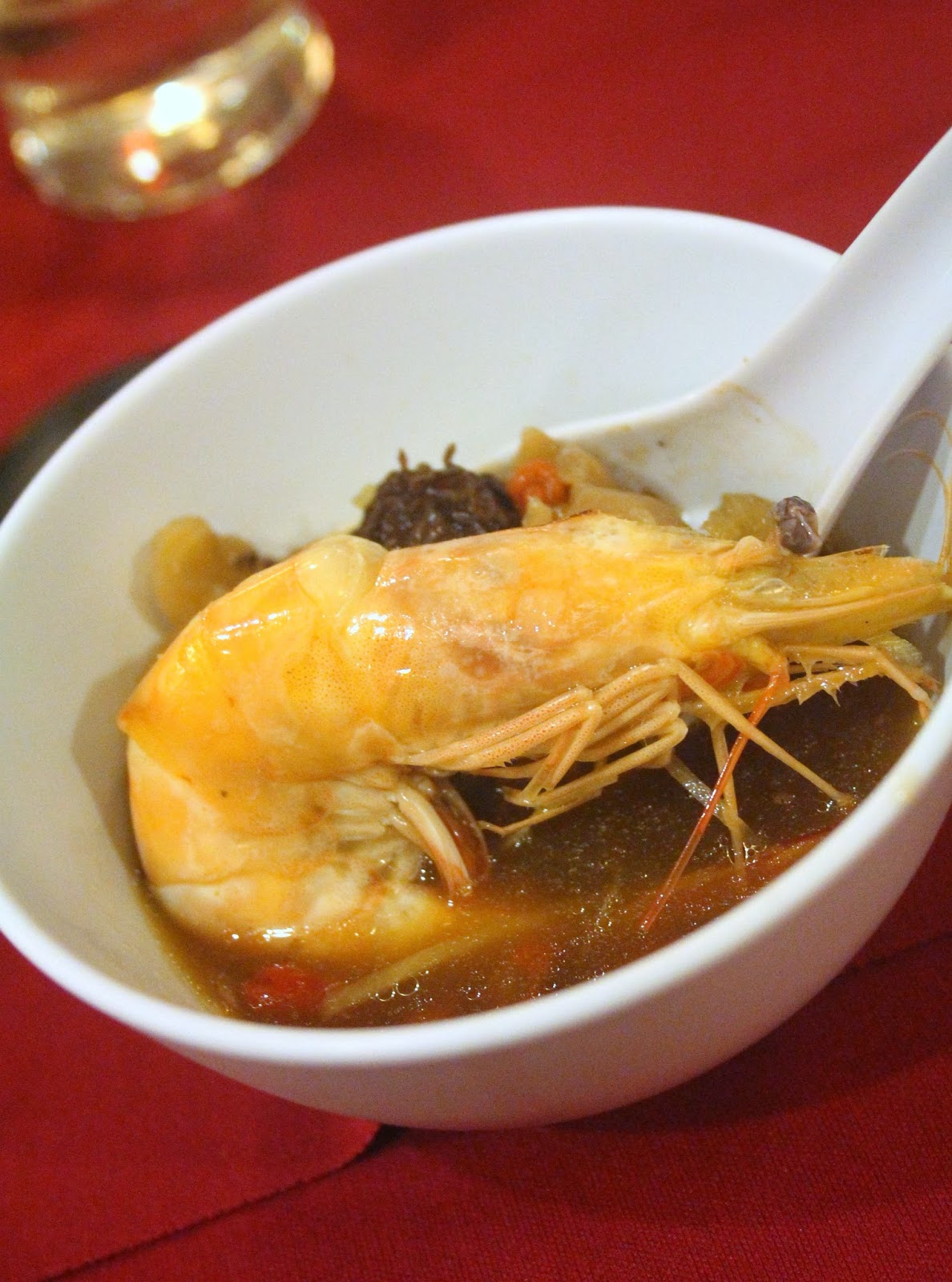 A close up of my lovely succulent prawn. I love the gingery tingling on the palate from the soup. 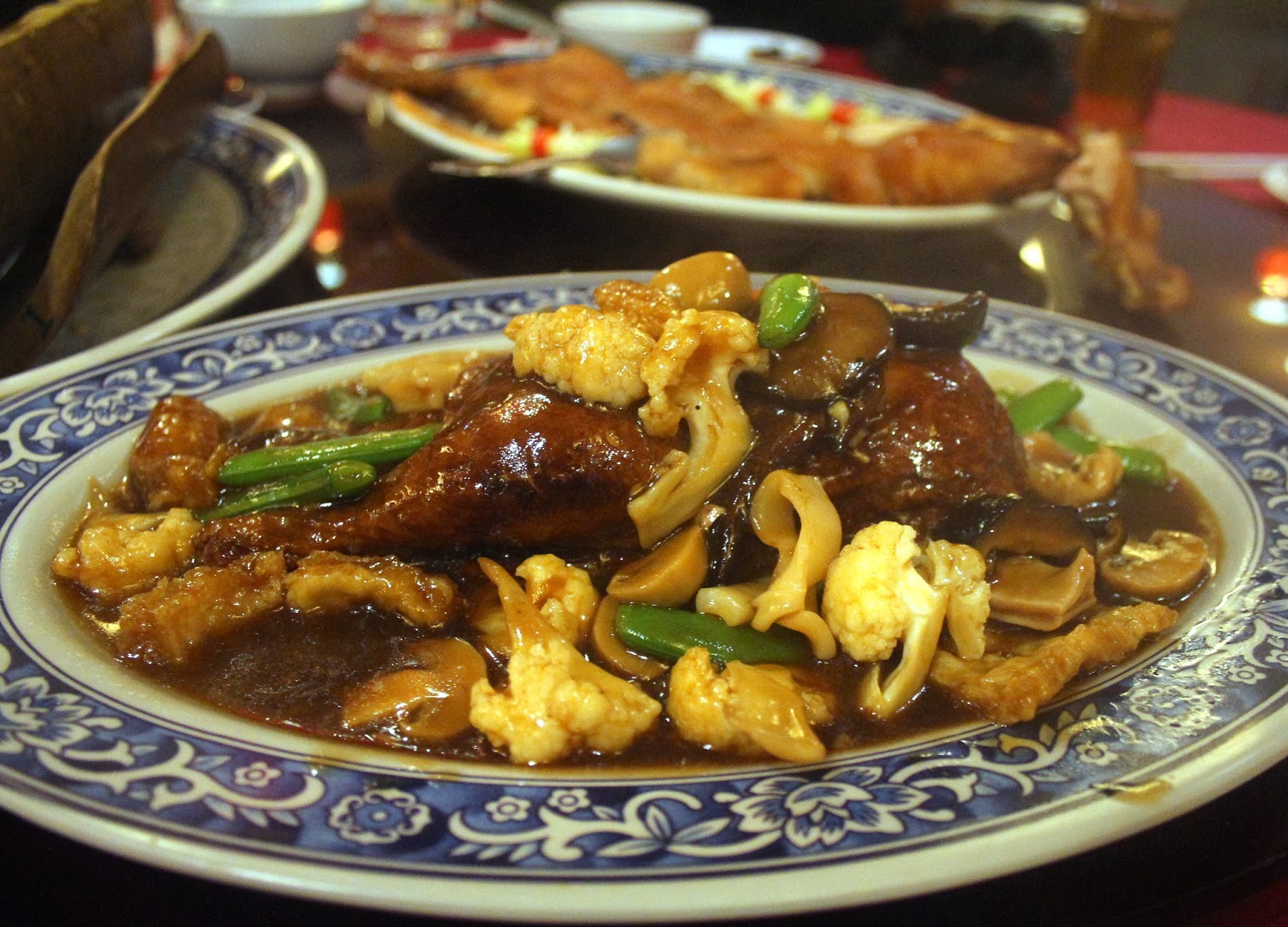 Braised Half Chicken or Duck with Vegetables and Mushroom. I could just eat this dish and douse my rice with gravy, and be very contented.  I always love the way New Formosa does their chicken dishes.  From stuffed roast chickens with yummy rice, to this tender braised bird, with meat falling off the bone. 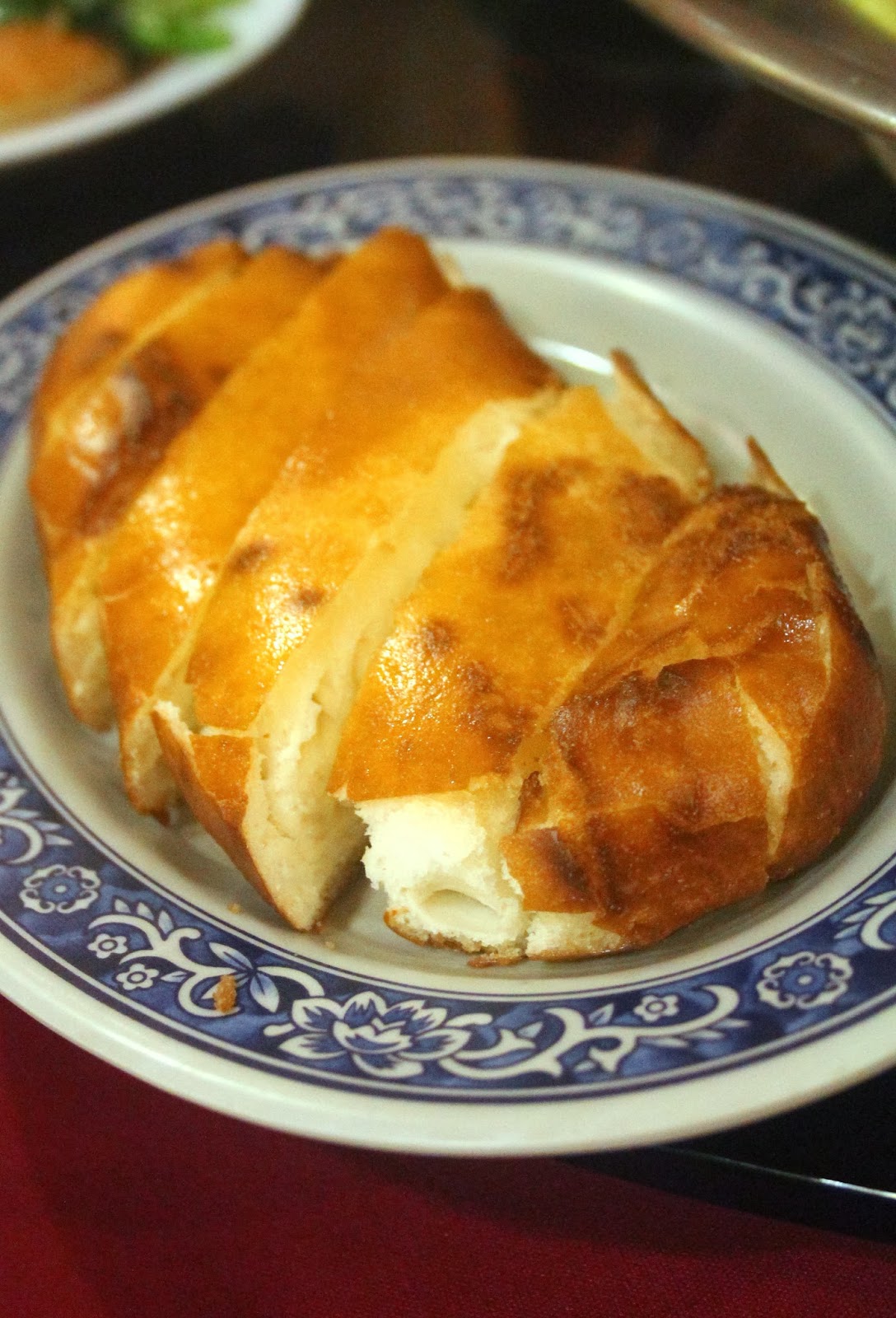 Man tou - which reminds me of a joke I heard years ago. (Credit to Mario Mahmood)
Mantou, charsiu bao and Lin Yong Bao went for a sad movie.  Charsiu Bao & Lin Yong Bao come out in tears, but Mantou was unaffected. Why?
Answer: Cos Mantou no filling.
Anyway the role of the Mantou here is to soak up that lovely gravy from the braised chicken. 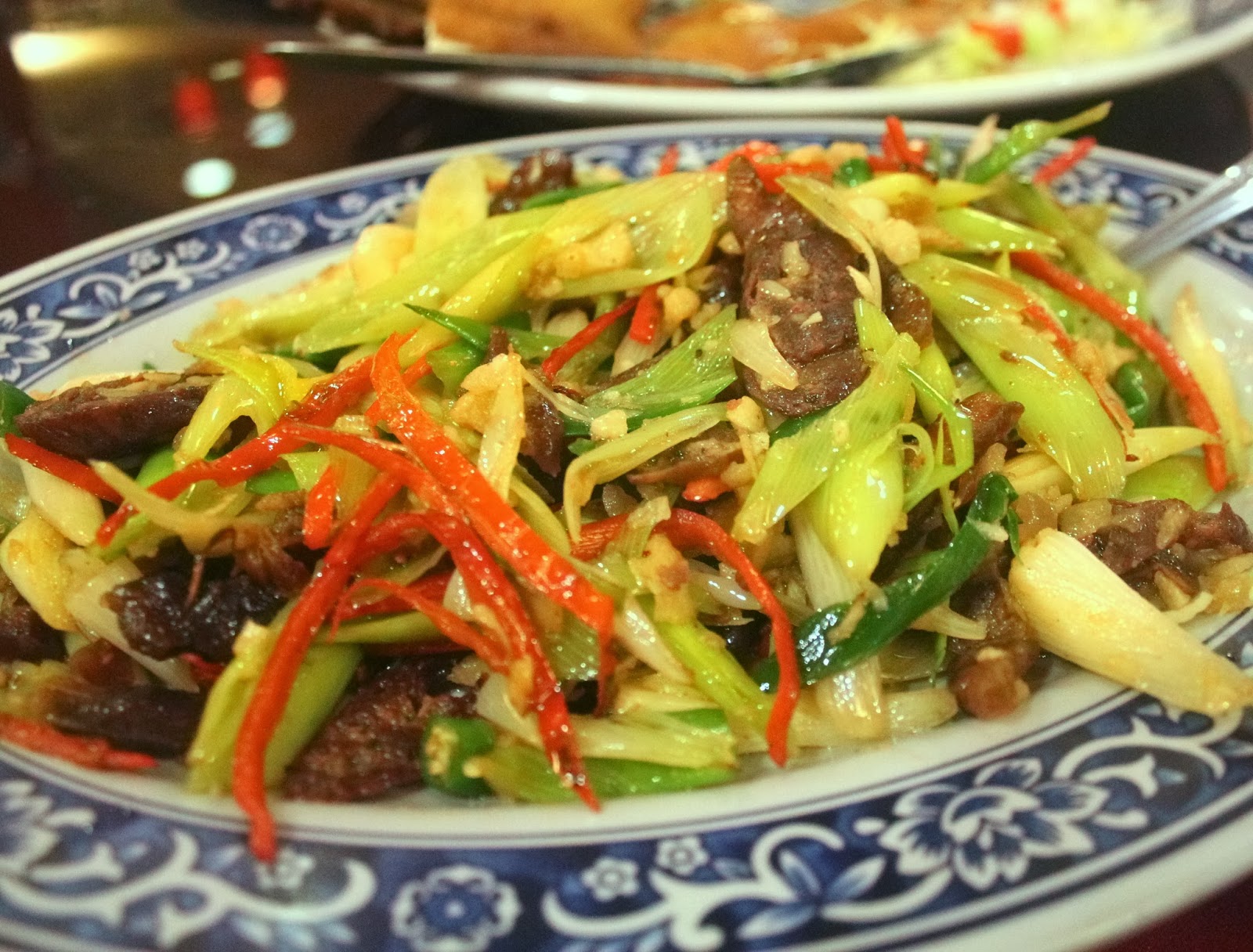 How can one lay eyes on such a colorful dish and not be happy?  Alas, this is not on the special menu, but is available for ala carte order.  Fried leeks with Liver Sausage.  Well, leeks are a rather acquired taste, you either leek it or you don't.  I happen to love leeks, and liver sausage. 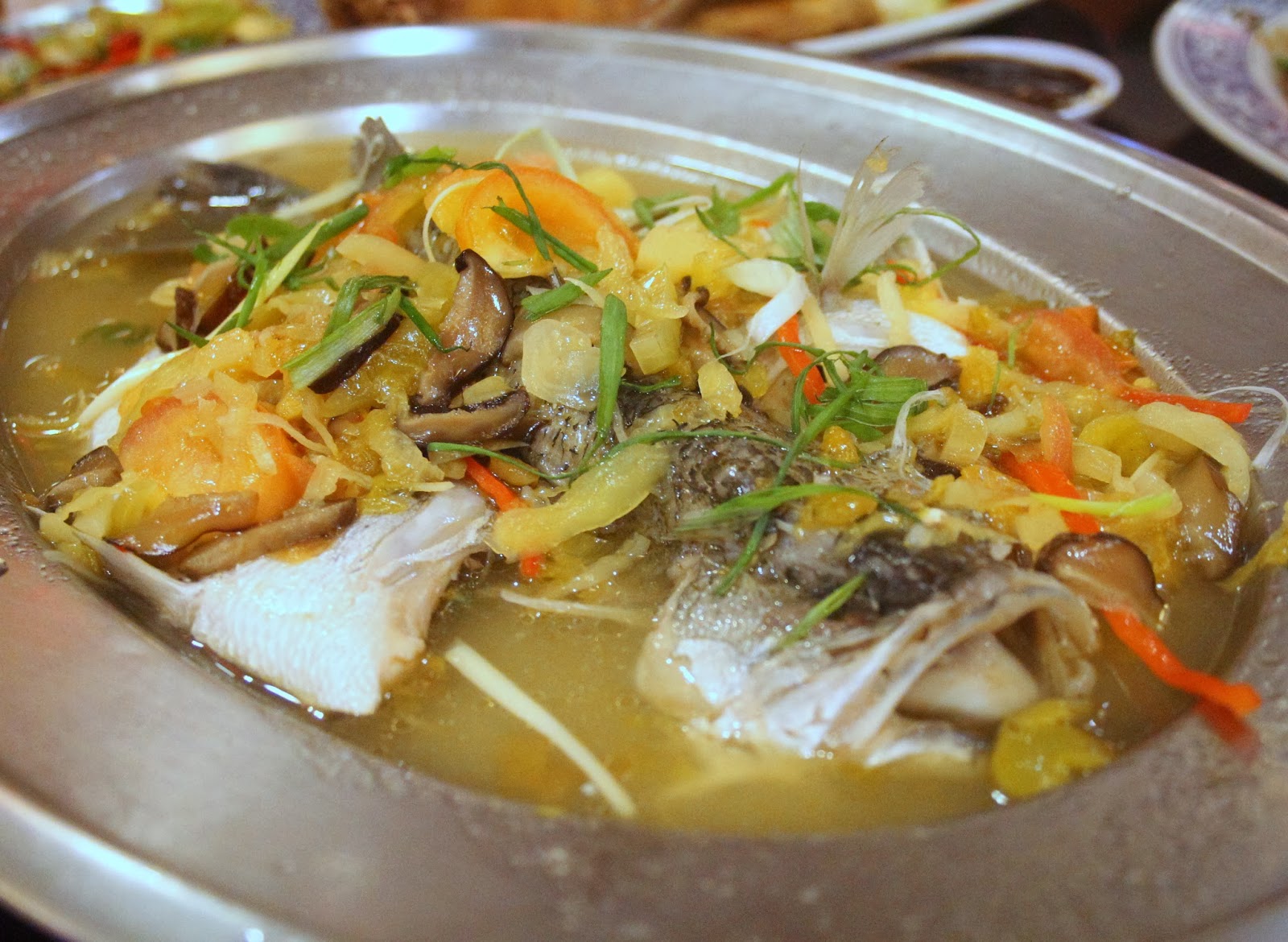 Local Sea Bass Steamed Hong Kong Teo Chew Style - Love the "soup" which really is good enough to drink on it's own.  The seabass was fresh, if a bit bony, so best to avoid any chatter while working your way through this dish, but probably overall wise advice when eating fish in general.  Tomatoes, salted mustard leaf, chilli and mushroom produce such a colourful flavour to the palate.  The only flavour missing was bitterness. 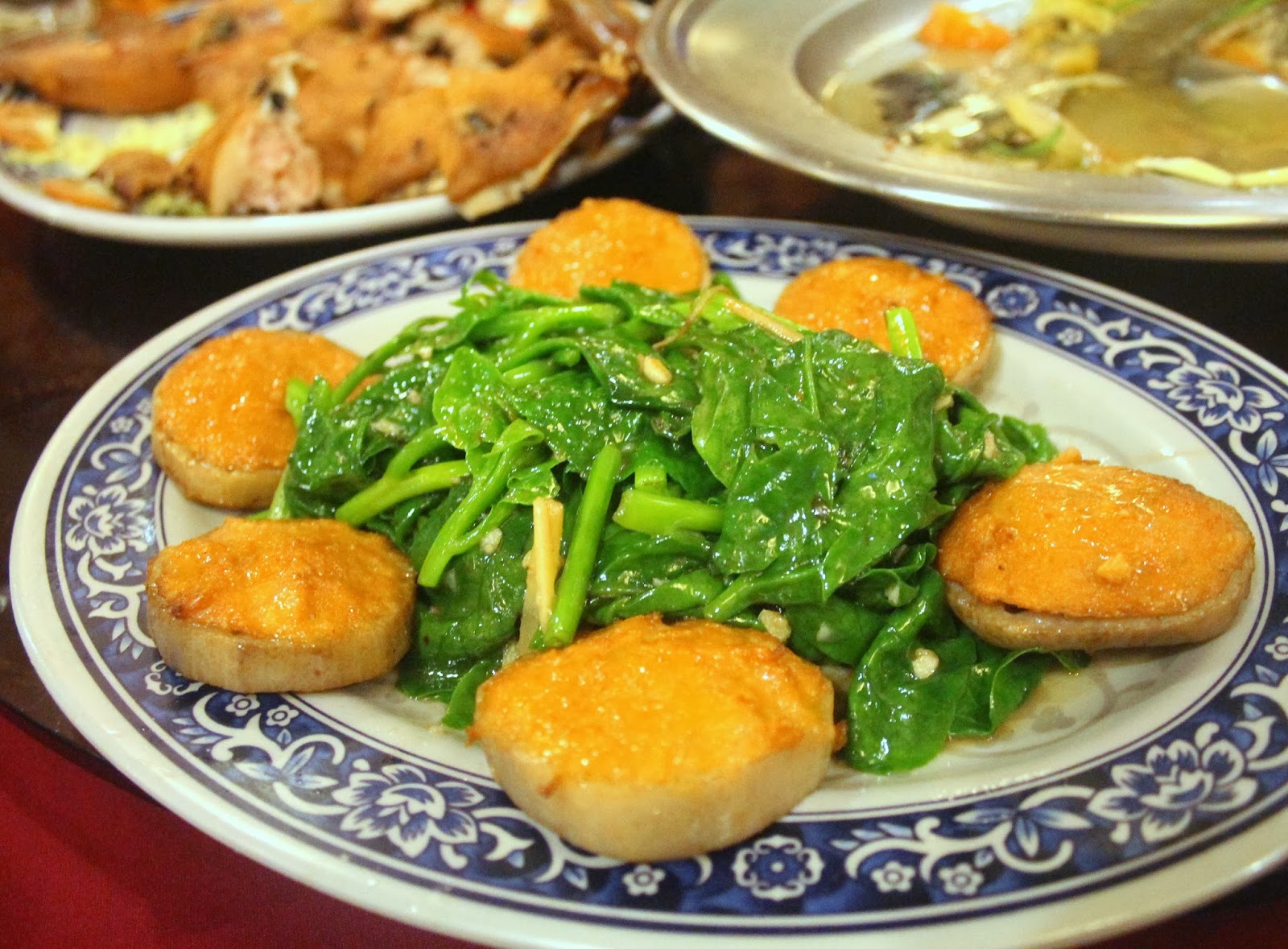 Stuffed lotus root with fish paste and leavy vegetables, in this case, some kind of potato leaf, I think, which has that slimy exterior that can just glide down your throat. 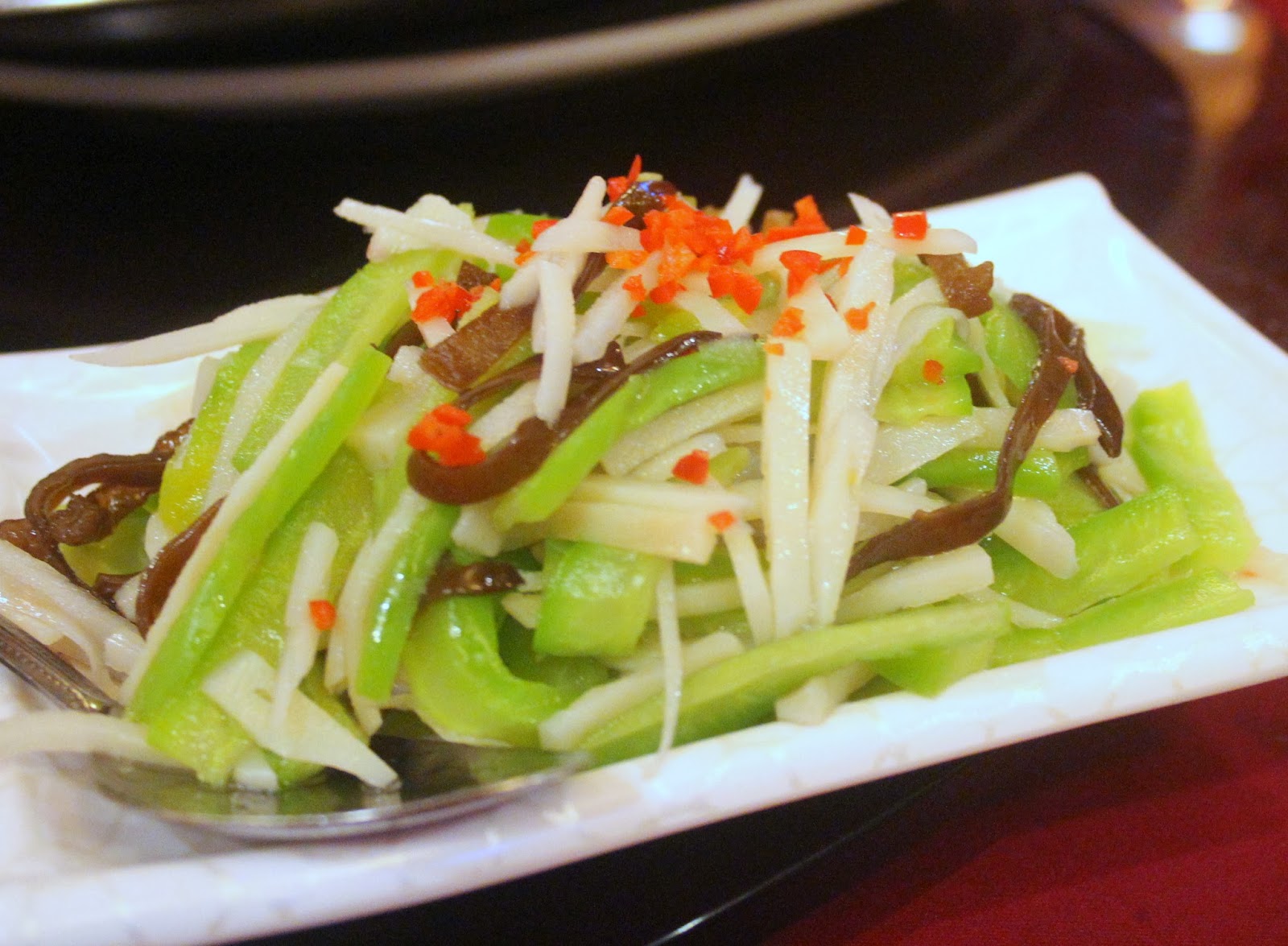 Extra not on the menu, pickled bitter gourd, lotus root and wood fungus. I love bitter gourd, for its bitterness, but surprisingly this form of pickling almosts obliterates all the bitterness and makes it almost sweet. 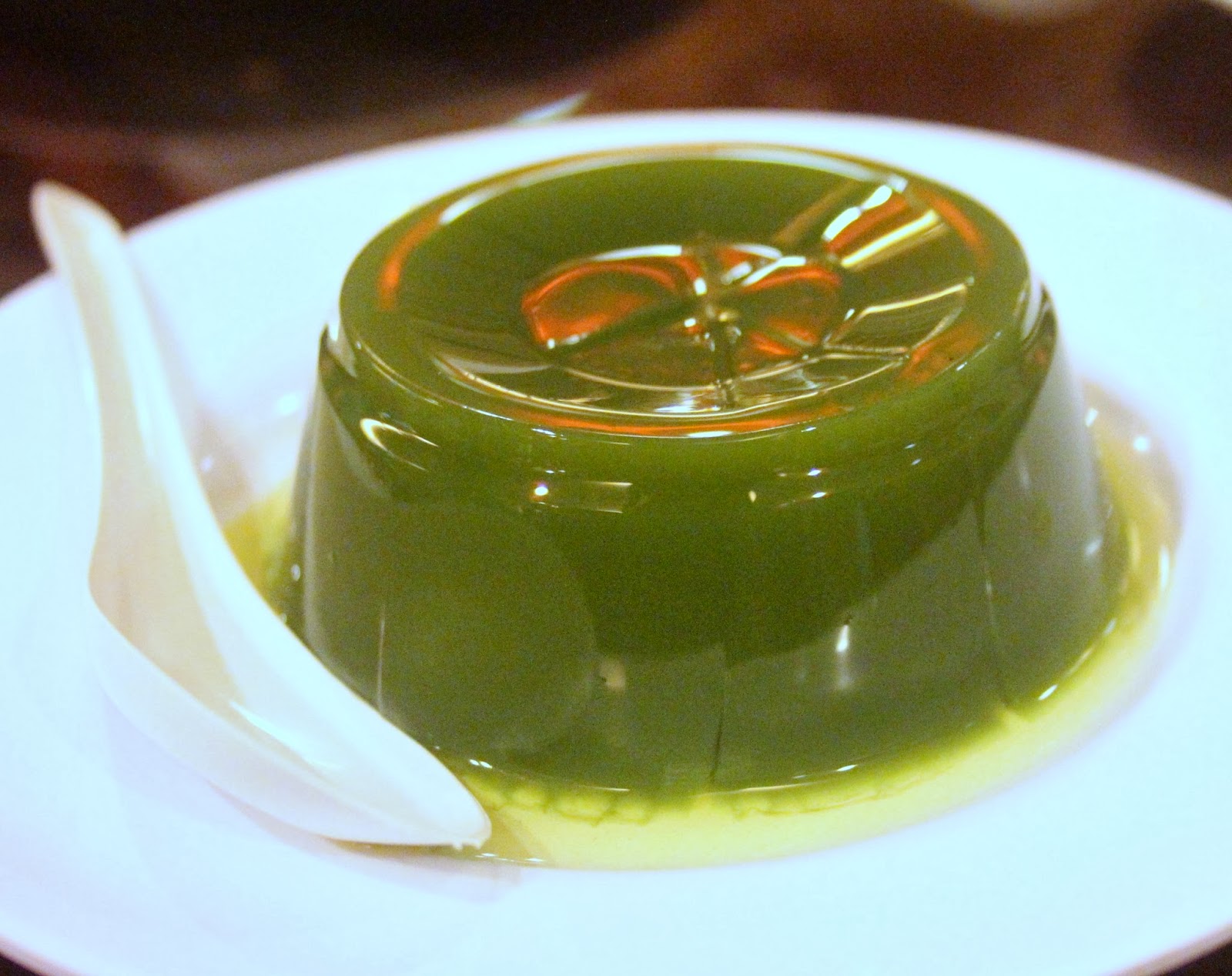 Though CCTravel was GUTTED  as was Rebecca Saw that they had run out of Or Nee, their signature yammy yummy dessert, I was secretly quite relieved, cos I was stuffed to my nose and beyond and ONE tablespoon of Or Nee would have sent me into the abyss of food comatose.   Instead, this WONDERFUL refreshing aloe vera jelly was JUST what I needed, as was this lovely herbal black jelly (Guai Lin Gou)... 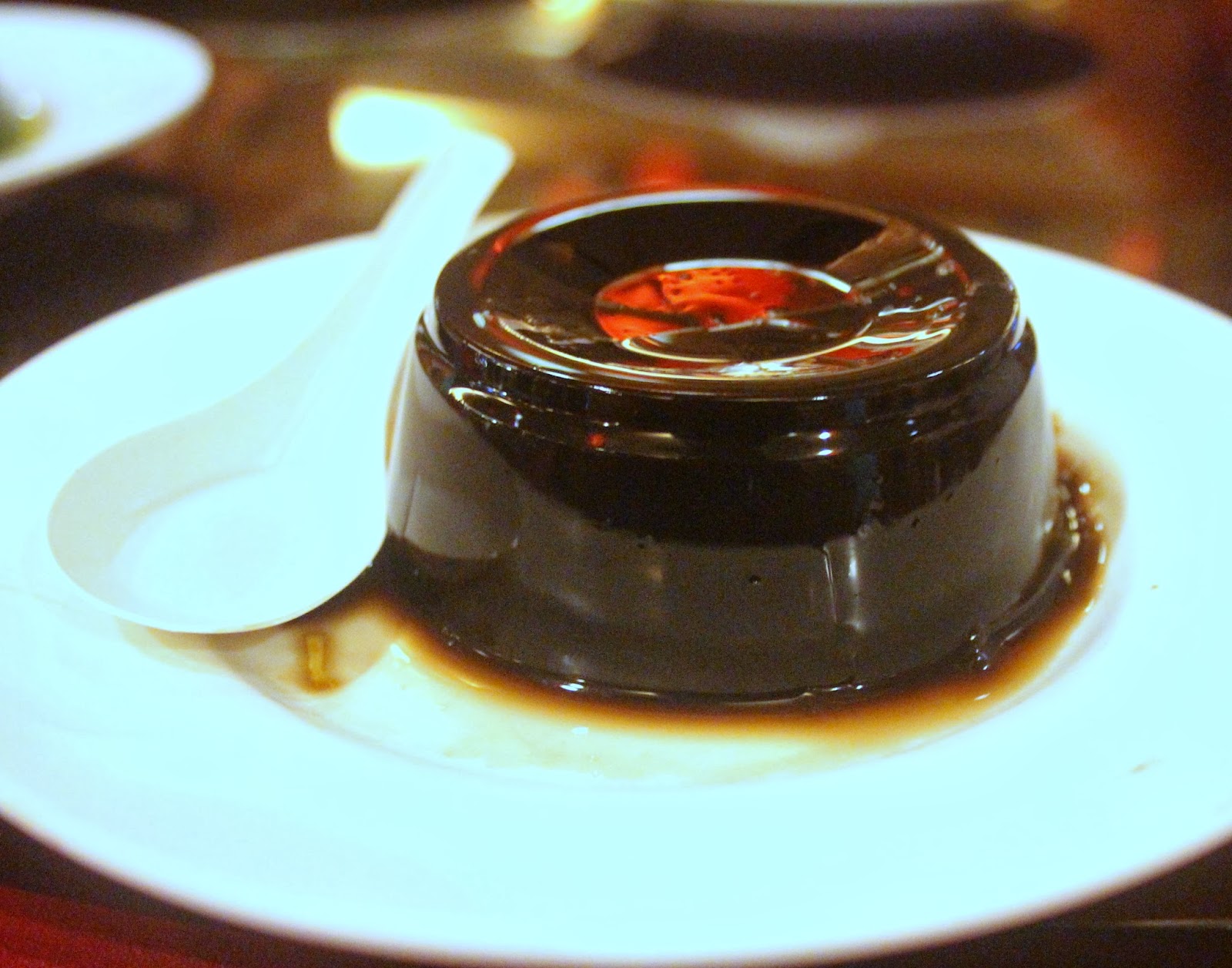 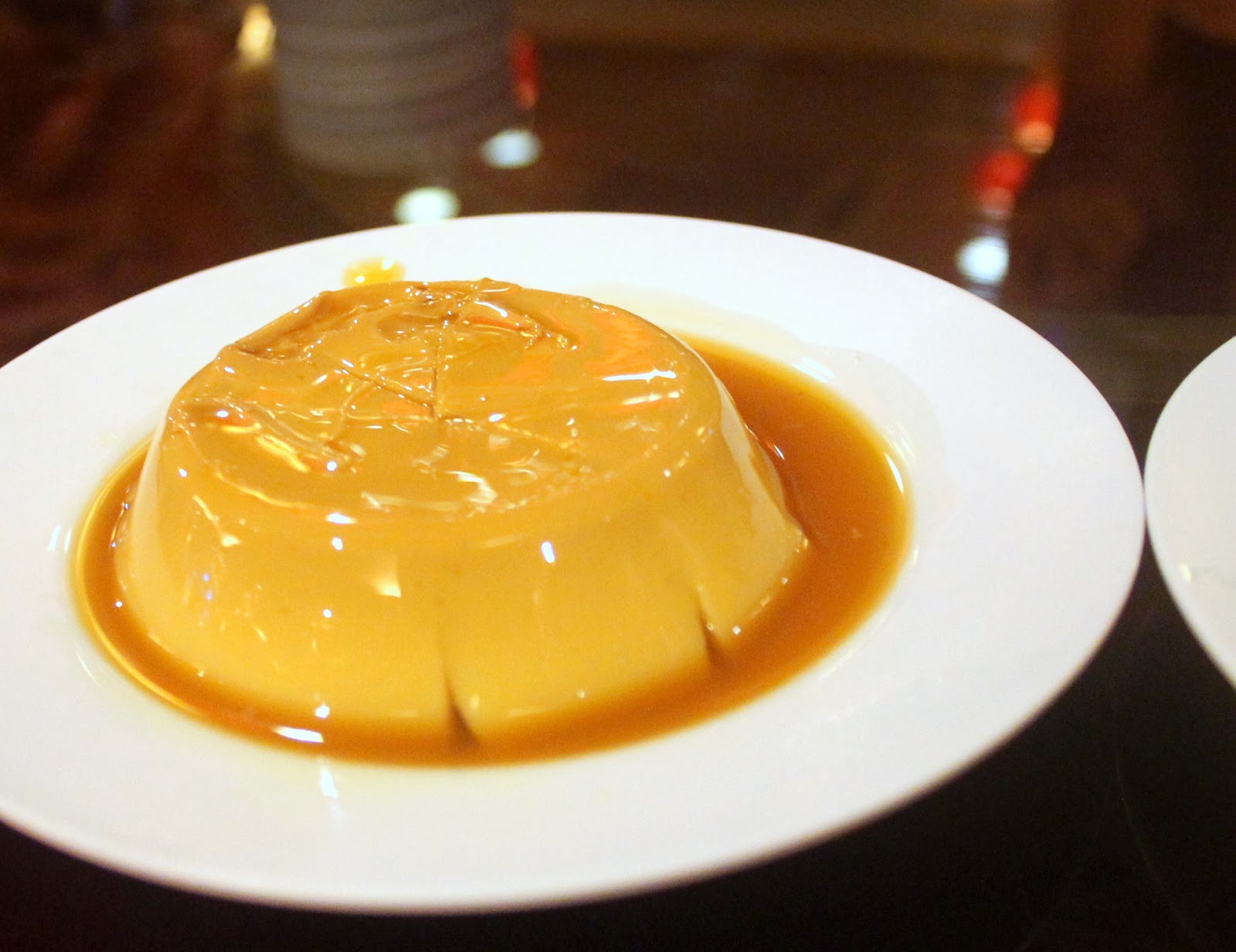 Whilst generally not a creme caramel fan, I enjoyed this one, because the caramel seemed to have been singed to have this "coffee" aroma, although there was no such addition. 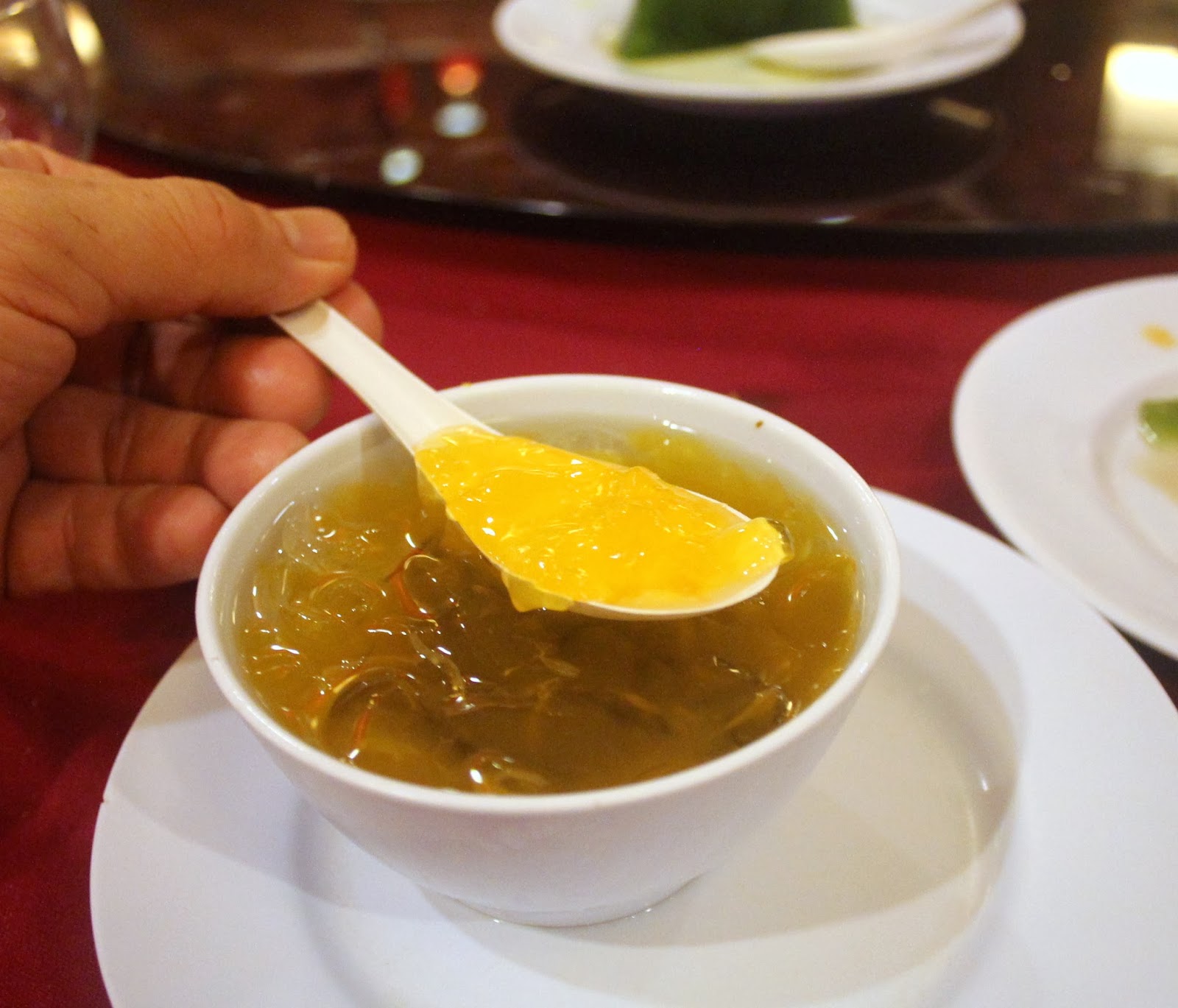 And finally, the dessert from the set, Low Sugar (music to my ears) AiYu Jelly, a final palate cleanser that psychologically leaves you thinking it cleansed your entire system too.  Very refreshing, I could eat this daily.