Its been awhile since I've been to the Westin, the last time was a family dinner at Prego, and before that a daze of inebriation at the Champagne brunch at Prego, with some friends, who abandoned me and left me to take a cab home on a Sunday afternoon.  I don't remember if I've actually been to 5 senses, as that particular establishment has "changed" concepts many times, from EEST to West, and from porky to pork free.

I have to say I was more than pleasantly surprised by the Chinese New Year set menu, prepared by  award-winning Chinese Chef de Cuisine Tan Tzaan Liing and his team.

5 senses have 3 Set Menus for CNY, namely the Happiness Reunion Set Menu which starts at RM1,888 nett for 10, the Blessings Reunion Set Menu at RM1,988 nett and the Abundance Reunion Set at RM2,298 nett.  Considering the quality of the food, and the fact that it's in a 5 star hotel, I'd say it is rather reasonably priced. 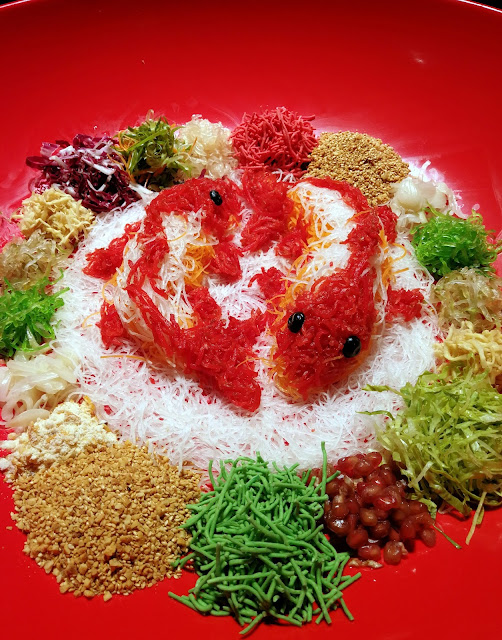 To start with we had the mandatory Yee Sang toss, with the Norwegian Salmon Yee Sang, priced at RM168 nett for the large portion.  Please note that the usual portion comes with only one "Fish" (there are two "fish" in this display portion because of the numbers at lunch). 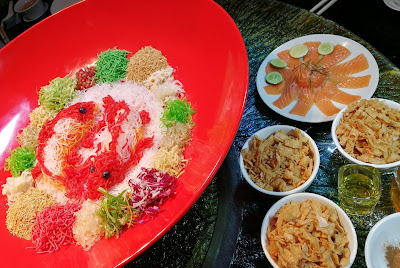 Despite the huge receptacle in which the yee sang was served, (to contain the abundance), we still managed to make a mess, also thanks to the numerous children present who were flicking and throwing the yee sang with their chopsticks with gay abandon. 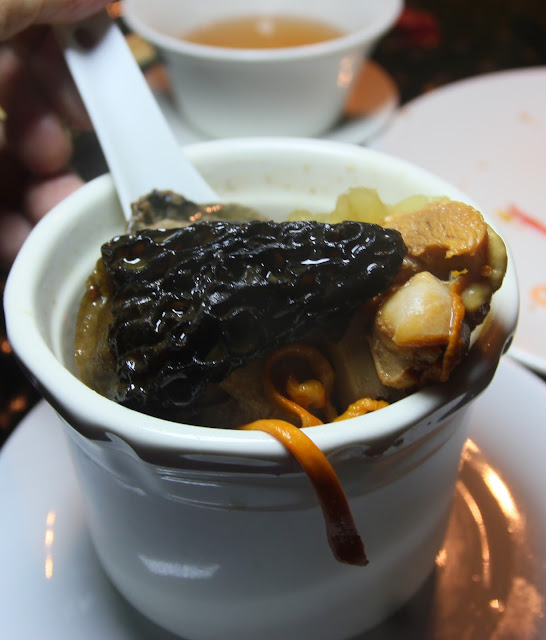 One of the best soups ever, double boiled scallops, morel and baby cabbage.  The broth was sublime, with almost a homecooked goodness, and the morel were such a treat.  RM68 nett per portion. 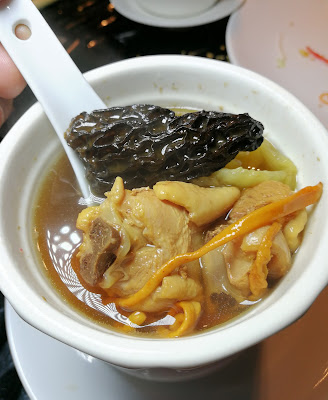 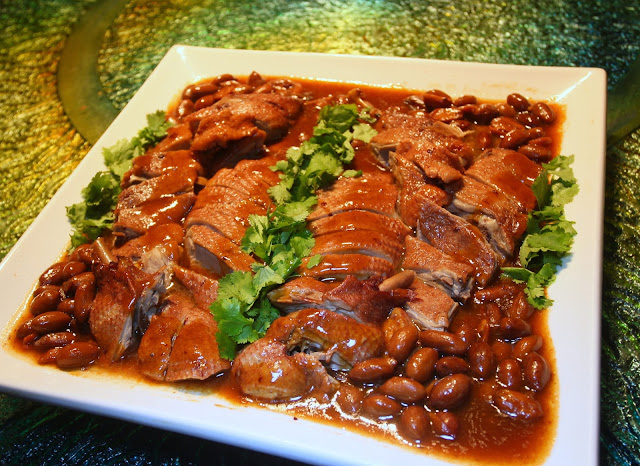 Braised Duck with Red Yeast Rice and Peanuts, RM138 nett for a while bird.  This was really delicious, am most impressed with what the Chef has done with the Duck.  The red yeast rice is not particularly distinct in flavour but imparts a subtle difference from the normal sauces . 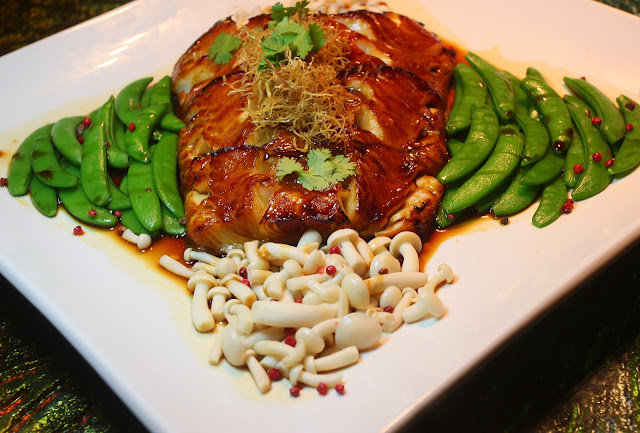 Honey Glazed Black Cod, at RM168 per portion, ...this here is around 2.5 portions, and would cost around RM500, but it was huge, and really, quite outstanding.  The flesh was cooked perfectly, flaky, and oozing with the taste of the honey glaze.  Thumbs up for this cod dish. 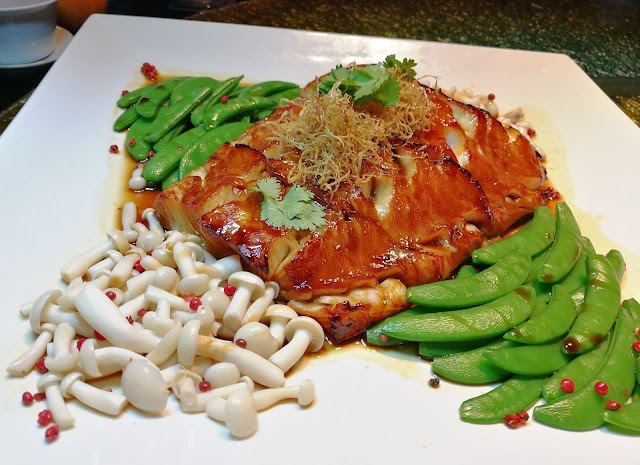 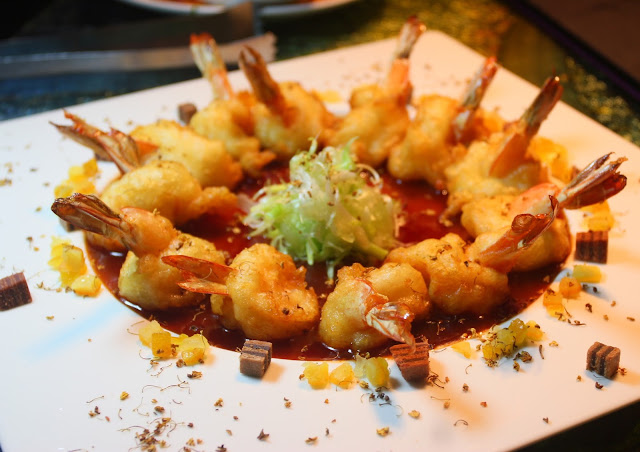 Deepfried Prawns with Hawthorn Sauce topped with Osmanthus.  I actually had to google to see what Hawthorn looks like, it's a little red berry, when you see it you'd know it.  The prawns, compared to the Cod was pedestrian, though no complaints about the freshness. RM88 per portion. 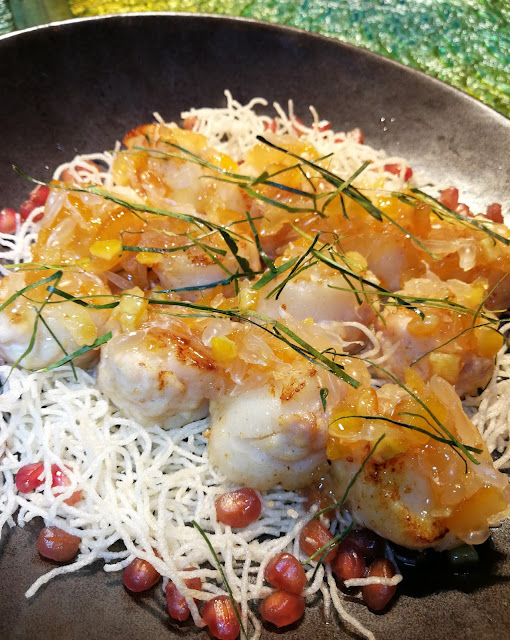 Pan Fried Scallops Mince Chicken with Citrus salsa, and interesting combination to say the least.  The citrus salsa was like an orange marmalade.  The sweet and salty combination works fairly well here. 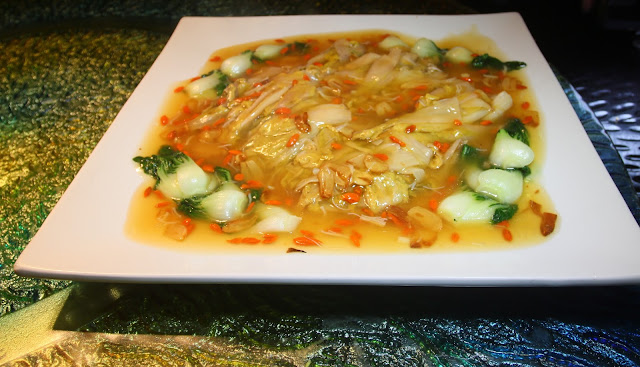 Stewed white baby cabbage with dried scallop and silver garlic, Yen of Westin said it reminded her of her grandmother's dish which was similar.  It does have a very home cooked feel to it, and I suppose all sets do need the token vegetable dish. 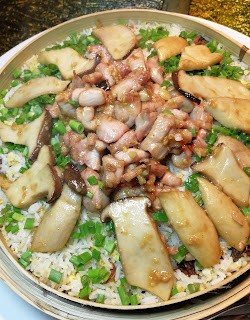 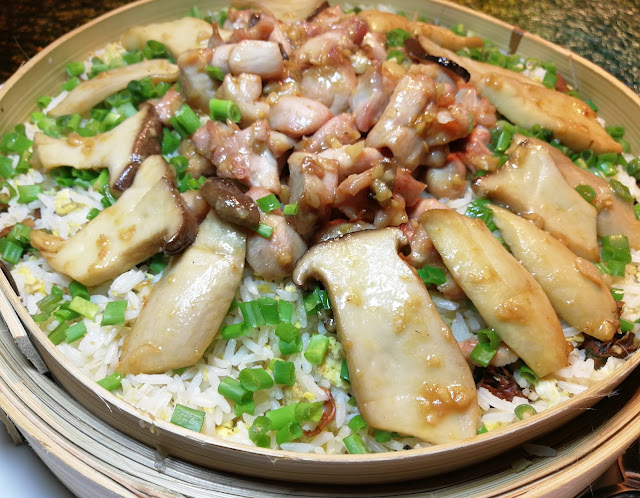 Fried Rice with Sesame Oil with Diced Chicken and Chopped Young Ginger. I'm actually surprised the rice is fried, served in a steaming basket, I assumed it was steamed together with the meats and mushroom, and the juices seeped into the rice much like lap mei fan.  It was delicious though. RM58 nett per portion. 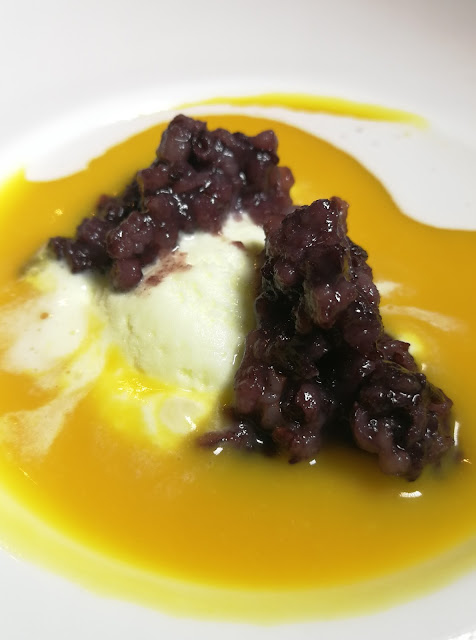 Almost everyone got this dish wrong, as I heard the fathers at the table tell their kids it was mango  and adzuki bean, when in actual fact, it's chilled  pumpkin and black  glutinous rice. which actually has a deep red adzuki bean hue to it. Lovely dessert actually, something different for a change.  RM16 nett per portion. 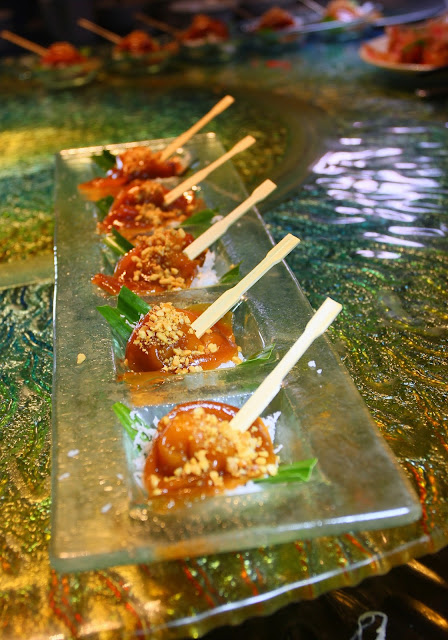 ...and to end, the obligatory Nian Gao, which actually over the years has been evolving into a rather gourmet dessert, served in so many fancy styles.  The good thing about this evolution is the nian gaos are generally not overly sweet. 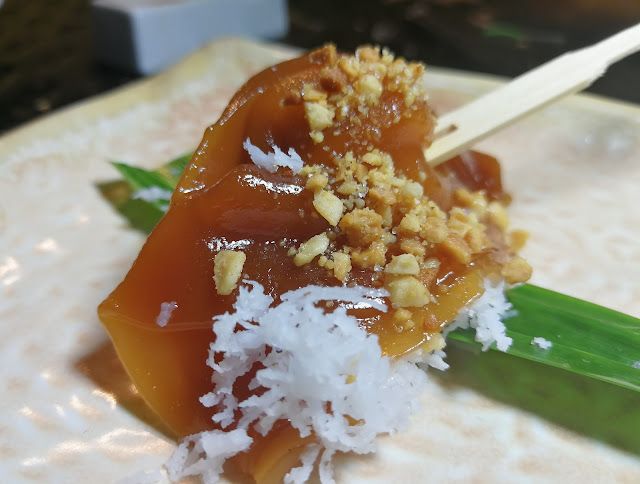 Yee Sang can be enjoyed by dining in or to be taken away Prices start from RM68 nett per standard serving and are available from 01 February to 02 March, 2018 as are the set menus.

For reservations or more information, please contact Westin Dining at 603.2773.8338 or email westindining@westin.com. Please note that All-You-Can-Eat Dim Sum and Simply Dim Sum buffet will not be available from 16 February to 02 March, 2018.
Posted by fatboybakes at 1:18 PM