How Will I Ever Eat Steak Again....

....after having sampled the most sublime rib roast at JI's (not Jemaah Islamayah) place last saturday.

It was a gorgeous cut of Rib Roast (or Prime Rib, I think it's called in these parts), costing RM160 per kg. He had prepared 2.7 kg for 7 pax, which worked out to 330gm per piece (there was one extra piece). I think your ordinary steaks in the restaurant weigh anything from 150 to 220 gm, so you can imagine the size of this. Then again, JI IS American, so the American portions are not surprising. 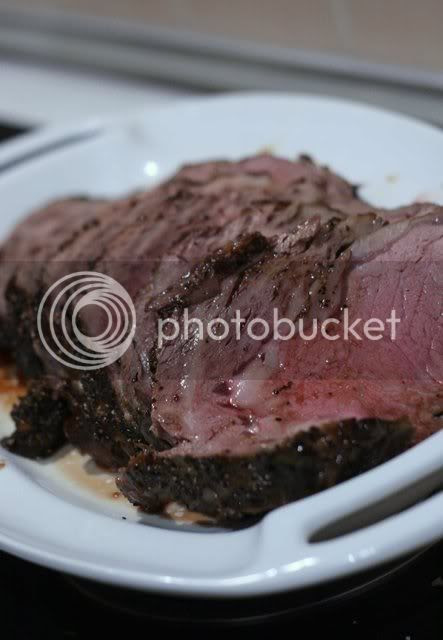 Nothing like that gorgeous aroma of pink flesh to get your saliva glands working overtimes..... The roast was prepared with great tender loving care, and much research. Coated with a layer of coarse salt and black pepper, the outsides were beautifully browned, while the inside, medium doneness, was evenly cooked throughout. The marbled fat ran through the meat like a complicated network of highways on a map. And the smell, OOOOOH YEAH..... 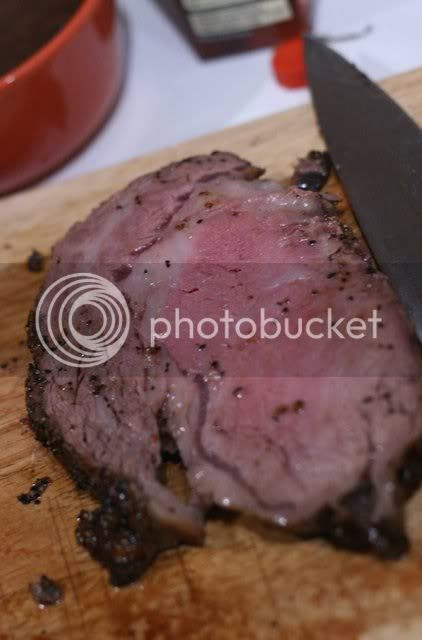 Just LOOK at that marbled fat!!!! At times like these, one throws caution to the winds, and any potential health hazard is chucked to the deepest recesses of your mind, as your heart, AND head, say GO FOR IT!!!! 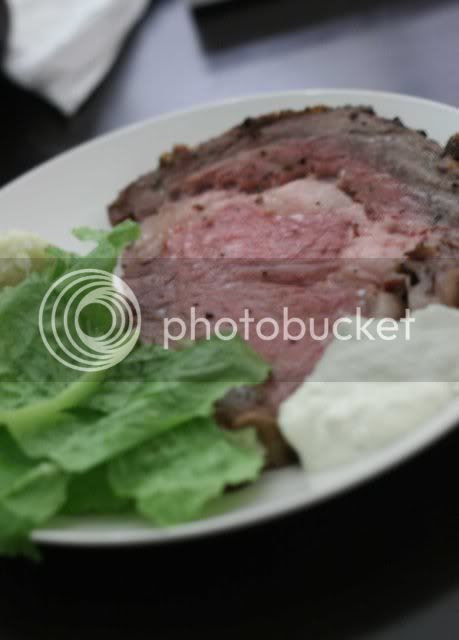 Darn, I think my hand must have been shaking from pure convulsive pleasure of anticipation, I just could not get a sharp shot. Complemented with a creamy buttery wasabi mash, leafy green salad with a plain vinaigrette dressing, and FRESH horseradish in sour cream, seriously this was BRILLIANT stuff.

I also decided, since I was bringing dessert, to finally try out the stuff I learnt from the Master Baker himself, and decided to make the Chilled Ginger Souffle and Chilled Chocolate Mousse. However, I didn't want to bring the mousse in ramekins, (so mah fan), so I decided to create an biscuit base for it, and bring it like a cake.

However, the dear wife FAILED to follow instructions, and upon reaching the host & hostess's house, did not ensure that the mousse was CHILLED. So here you have a deflated mousse. However, taste wise, it was SUPERB, (thanks so much Nige for imparting thine wisdom....), and actually, I had it again the next day properly chilled, and its really good. I had also added some peppermint extract (EXTRACT okay, not essence, don't play play) which good friend, Pit had bought for me all the way from Cambridge, and sent it back via his good wife. Thanks guys. I shall make one of these for you to sample. 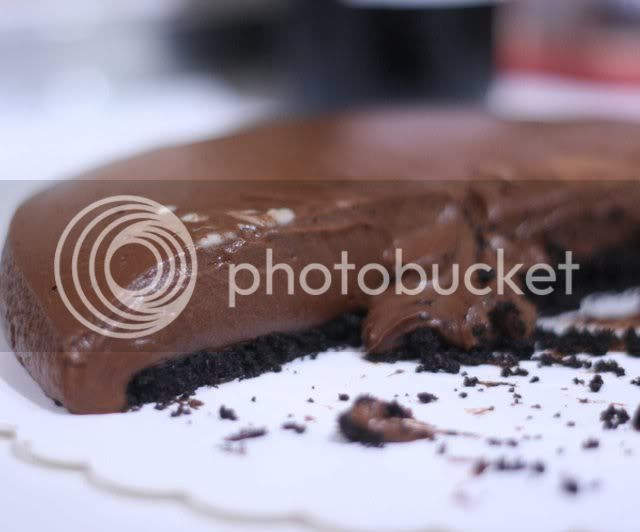 Didn't take pictures of the Chilled Ginger souffle, because it was hard to take a picture of a bowl of white stuff. I think I must have forgotten to write down a step or two during the class, we were too busy laughing about a certain "lebanese" Aussie celebrity chef and talking other nonsense. My souffle texture was NOTHING like the see foo's. The base was watery, as if something had separated.

Anyway, taste wise, it was fine. So, what a great way to spend a Saturday night, at a friend's apartment, greattttt steak (hence, how will I ever eat steak at a restaurant again? Seriously, this was one of the best steaks I've ever had), great company, Johnny Walker Green Label and Moet & Chandon Champagne. Ah, sigh................distant dreamy look
Posted by fatboybakes at 10:07 AM

red meat is good... marbling of red meat even better... marbled red meat and home-made dessert to follow... the best! u guys are so lucky ! always get the best.. how can... jealous:P

hahah reminds me of the christmas dinner i had last year..same cut..went bak for 2nds n 3rds until it ran out (middle of dinner)

ooooh, how to get that cut??? Can get contact ah? Humph, what a coincidence, was planning to make chilled souffle also for a dinner party, I am attending tmrw nite. Hope, my souffle and mousse turn out.

Ooh, such lovely cuts you've got there, Mr. Steak... Call me an instant fan already. When can we have our little Meet the Meat, er, Meet 'n' Greet? LOL

LFB, hahaha, yes, will host a little dinner soon enough, so that ms ciki (& mr cumi) up there can join us and be amongst friends...but i doubt i can afford that particular cut...it'll have to be plain old rib eye...

boolicious, its from village grocer wor. just ask the aunty there.

nipples, you werent at MY xmas dinner were you? (trying to recall)...coz we had roast beef too....oh, you couldnt have been there la, it was only family...(not that you're NOT family, did you see those pics saying you look like my dad, (someone said we look like father and son) at lemongrass' birthday)....

ciki, hah, ma'am, for someone who just had maccallan and foie gras.... harumph, whattttt can i sayyyyyyyy!

I am not going to heaven without having a slice of that first.

oh, so this was the piece of meat you were telling me about!

Wagyu is so last season. This is cool. But I must say the mash excited me. Yeah.

(Btw, thanks for the laugh.)

wah, lemongrass, all the way from oz. what laugh?

hairy, maybe we can think of bringing this to SS hor!

You know what I mean, idiot. *hugs*

haha no la..not at ur xmas dinner (err think for awhile) noo definitely not..

u me dad? haha i look way younger or u look way older wor? go search for the comments 1st..

ohhh!!! good idea!! btw, where is village grocer ar? in BV is it? i only know there's a cold storage there. someone recommended this place when i said i couldnt find sundried tomatoes at M&S. forgot already.

young hairy, no no no, village grocer is in bangsar village, direct competitors to cold storage.

nipples, of course, whoever said that needs a white walking stick, dark glasses and a guide dog.

thamby, really la, i not sure. how oz? i so jeles. hope its hot as hell.

What is JI - husband keeps me chained to the kitchen. I MUST have the steak.

Does your mousse have uncooked eggs?

Hey, I got some wagyu (the cheaper stuff lah) but the marbling is quite nice and need to cook it tonight. Scared. Any quick tips? If not I'm going to bung it into a pie. Help!

Well well, how can anyone swear of steak (except vegetarians).

and that mousse looks divine!! Gosh, that got my saliva going.

daphne, swear off ya mean? hahaha, ya, how can anyone!

the mousse was rather good. must use dark choc.

Dee dear, JI is friend's initials la... mousse got uncooked white, and questionably cooked yolks... (its folded into the melted chocolate)...but since the choc is so thick, i reckon the germs cant breathe anyway. YOU CANT BUNG WAGYU INTO A PIE!!!!! that's like chucking foie gras into a sausage roll....

i would just pan sear it if i were you, and serve it with hot english mustard or/and horseradish. NO PIE, NO NO NO

jackson: you guan yin or vegetarian?

Dammit! Should have read your reply earlier :(
Pie was brilliant. And the wagyu a lesser grade :) Next time, I'll pan sear the good stuff. Need details. Please.

dee, i saw your post, your wagyu beef pie looked stunnnnnnnnnning. i was salivating!! err, i've never pan seared wagyu before, but i guess its just sear quickly on both sides lor.

henry, he is definitely not vegetarian.