They're available in all shapes and sizes these days. Plump, shrivelled, dried, fresh, juicy, Egyptian, Californian, take your pick. If dates were human, there'd be no singles left on this earth.

It was quite timely, therefore, that SUGAR, on AFC, featured Dates as the main ingredient. Today, (I can hear Anna Olson speaking) we're going to use Dates. While she is no Nigella, (or not endowed like Nigella), I quite enjoy her cook show coz the stuff looks fairly easy to do, AND some of it actually looks rather delicious. You know how there are some cook shows you wonder why you even bother watching, coz the stuff they churn out looks like something you'd cook when you're a poor student who's one stop short of going to a soup kitchen.

Anyway, her two date recipes featured date squares and date crostada. The latter actually looked more delicious, but date squares sound so easy to make. And they ARE:

The recipe can be found here, but if you're like me, and too lazy to click on links, then I shall do you a favour by plagiarising it and reproducing it here.

3 cups pitted dates. (I just used the generic cheap ones, coz they're gonna be mashed up. No Bateels or Medjuls here)
Zest of 1 orange
1 cup water
25 gm butter (ah, see, my plagiarism has benefits for the metricly inclined...her measurements of butter are in cups and spoons).

Chuck the entire list of ingredients into a pot, and cook until boiling. Remove from heat, and blitz in a blender or processor. Contrary to her recipe, I didnt bother waiting for it to cool down.

For the base and topping,

Now I actually ended up thinking this wasnt enough. I might change it to 3 cups oats, 1½ cups flour, and 150 gm butter the next time.

Now, its unbelievably easy. Just chuck dry ingredients in a mixing bowl, and add the melted butter, like glue, to bind it all together. This can be done by stirring, or ....stirring.

Line an 8" square thin, with parchment overhanging on all four sides. I tried to save parchment, by overhanging on just two sides, north and south, ignoring east and west. I later on had difficulty removing it, coz the dates were sticky, (like some girlfriends), and clung on to the edges of the unlined tin. Hence, it is better to use protection, rather than get stuck with the sticky date.

Line the base of the tin with 2/3rds of the oat flour mixture. Spread the layer of the mashed dates evenly over the biscuit base, and sprinkle remaining oats as topping. Bake in 180C oven for about 40 minutes. Leave to cool in pan before removing. 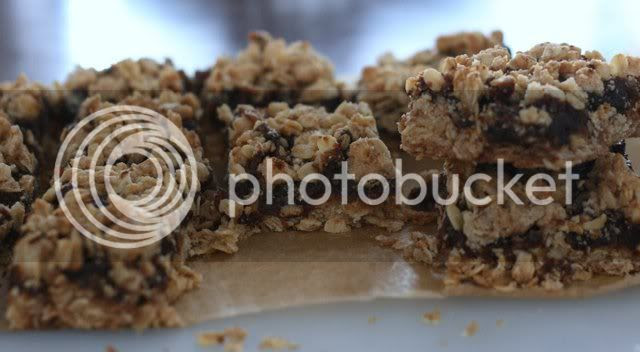 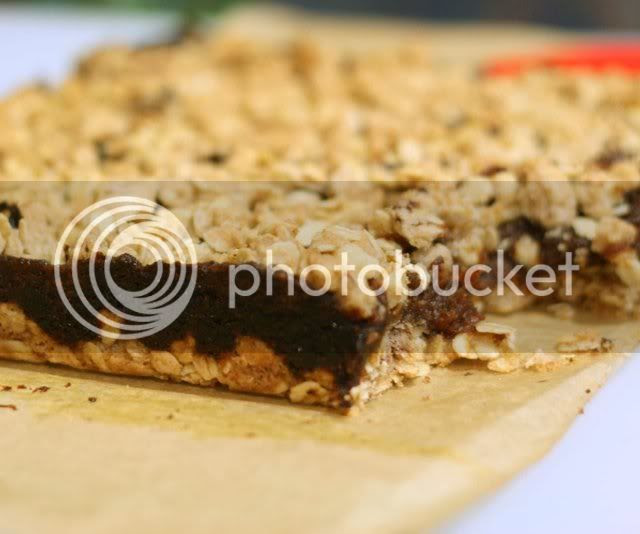 Now, if you like dates, you'll probably like this, but warning, it does tend to be on the sweet side, but nothing that can't be countered with a cup of strong americano or espresso, with NO sugar. Mmm, sadly, no one ELSE in MY family is a date fan, so, I've been scoffing these for breakfast. Sigh, since no one else in my family likes dates, it also means it's unlikely I'll make them again. Which is a pity, because I'm sure all those oats, and fibre from the dates, is really good for toileting.

If you want to be really decadent, (which I have not been), plonk on a dollop of clotted cream to combat the sweetness.
Posted by fatboybakes at 4:18 PM

Sir, you really know how to throw us a headline that reels us right in...

Now, be a good blogger and blog about your REAL first date, boleh? :P

p.s. Are you planning to bake these for sale? I'm cracking my head on what to get my new colleagues for their buka puasa. Lil packages of date squares sounds like a nifty idea lah...

Hi! Those look absolutely delicious! I'm a big fan of both oats and dates! And I'm salivating at work looking at the photos. I would be more than glad to help you get rid of those! Yummm... Lighten your burden eh? Hehehehehe.. :P

the hermit, wow, what are the odds huh, a fan of dates AND oats...heh heh, i'll pass you some the next time i make a batch, since the family are not fans, and i DO have a lot of dates and oats left to kill.

kenny mah, i like to think of myself as a cake whore. for a price, anything goes. so yeah, we can even attempt to make it look presentable by wrapping them in nice little containers or glass paper.

as for the real first date, gee, hmmmm, thinking very hard... i honestly cant remember. that's why they're EXES ma.
breaking into song...to the tune of UNFORGETTABLE by Nat King Cole

i swear them date squares are giving me an extroardinary amount of wind...

you can recycle this post for the next valentine's day lar. comedic romantism (which i'm sure you will not agree) at it's yummiest. like movies with meg ryan (exclude that nude one) liddat...

"Hence, it is better to use protection, rather than get stuck with the sticky date."
I'll take note of that...thank you! hehe...

errr, i think it's romanticism...ooppss

goes to show what kinda person i am lar, hor? hehehe...

aiyoyo..so i suppose u finally managed to let go of all ur "sticky dates" and found not so sticky wife hor?..

wat a way of enjoying desserts..*tell urself dis can go toilet 1..so scoff them dwn* haha

Cool beans! Let me figure out the number of folks we have in the office and get back to you on Facebook tomorrow. It'd be such a nice surprise. :)

not a fan of dates.. but that dollop of cream may do the trick! so clever!:D

ciki, that'll cover all the food groups in that date thang..protein from the errr...cream? carbs from the oats, fibre from dates, very wholesome, and nutritious indeed.

nipples, well, KL IS very small, so i better not put myself in an incriminating position hor, by answering your question. of course, the present wife is like...teflon.

hairy, there's a comedy with meg ryan NUDE? i just saw one with meg ryan FAT, but NUDE? which one which one? i am sure the romantism was just a temporary slip of the mind...doing too much drafting in the national language perhaps....

I like to have my date and eat him too. Hey if got some left over, lemme try next week? :-D

Nic + FBB: Not sure about comedy, but Ms. Ryan was sure stark naked in a drama a few years back, directed by Jane Campion of 'The Piano' fame. Can't remember the title though. Good film, even the bits with her clothes on.

Hey Nice! You can replace the dates with other dried fruits like apricots, prunes or even more adventurous - the mixed fruits that you use for fruitcake. I would love ones with dried strawberries! BTW I went for the pastry classes at HTC - The French Culinary School in Asia. Mimi still remembers you and she has this smile when I mentioned you. You are popular wor!

sam, hahaha, mimi is sweet. i guess its not hard to remember, coz i was the only male NON CHEF in that class. all the males were professional chefs, all the females were tai tais. which class was this? the cupcake one by jean arnaud?
when you say dried strawberries, do you mean like the ones they sell in camerons? i love those, but havent seen them in KL. only in camerons, and bangkok. anna (olson) said the same thing, can substitute with other dried fruit.

LFB, well, you MUST find out the title. but actually, on 2nd thought, how old was megs when she bared all? Heck, Julie Andrews was starkers in 10, and that WAS NOT a sight to behold.

LL, hmph...lets see what goodies you bring me from sydney first.

i lurve the internet!

here's the link to that meg ryan movie (with nudity). it's call "In The Cut".

nvr used html in the comment box before. hope it works! ;D

Nic (KHKL): Thanks! That's the movie! Have you seen it? It's beautiful, if a tad disturbing towards the end.

FBB: Thanks for making them date-and-oatmeal squares! My colleagues were pleasantly surprised by them this morn and I'm sure they'll love the taste of it this evening when they berbuka puasa. :D

any substitute for the sugar in this recipe?

henry, there's very little added sugar. the sweetness is from the dates. there is no added sugar in the date filling.

hairy, ooh, must get hold of the movie hor.