Although we eat here very often, I have not bothered to bring my camera, precisely BECAUSE we eat here often. So, regularity and routine are taken for granted. Such is life. When friends come back from overseas, everyone rushes to meet them, whilst those that are right under your nose barely merit a phone call. It is true that I sometimes see my friends who live abroad, more often than I see those that live here.

I digress, and risk sounding too deep and meaningful, when in reality, I am as shallow as this tank. 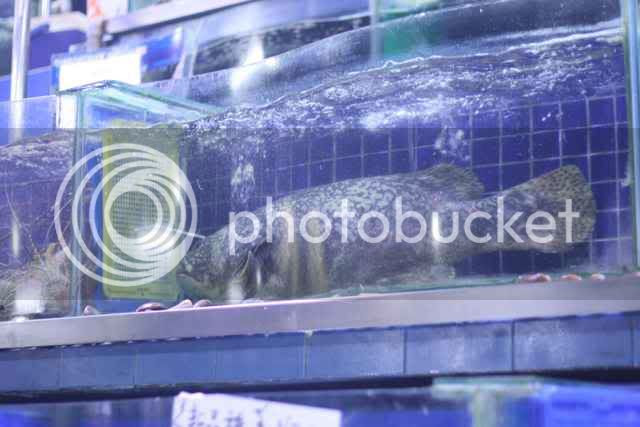 Check out the huge mother of groupers (garoupas) here. Son was asking me how they survive in such a small area. I told him they were like death row prisoners in their cell, waiting to be executed, so did not need to roam freely. Strange, how these efforts to inculcate veganism or vegetarianism into kids just fail miserably. All he said was, "good point".

I'm still a virgin, when it comes to these interesting looking creatures, called GEODUCKS, pronounced apparently as GweeDuck. Why the hell spell it as GEO when it's pronounced GWEE? No wonder the government is reviewing the policy of teaching Science and Math in English. In Malay, it would be unambiguously spelt as it sounded. GWIDAK. A lecturer from the UIA, in making her point for the reversal of the policy, (she's in favour of NOT teaching Math & Science in English), said, "afterall, a polygon is a poligon, and a molecule is molikul". Not sure what her point was. Gosh, I seem to be going off tangent a fairbit. Where as I? Oh, yes, still a virgin. 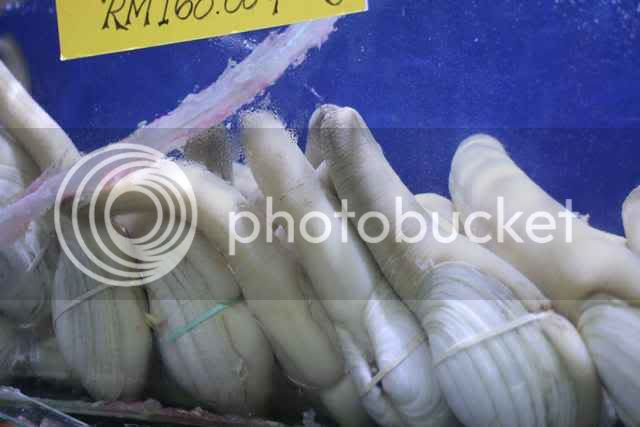 I almost felt like I was scuba diving as I gazed at these Scottish Bamboo Clams. (Chok Tan in chinese). Except in the natural surrounding, I doubt they'll be tied in bunches of 8 like that. 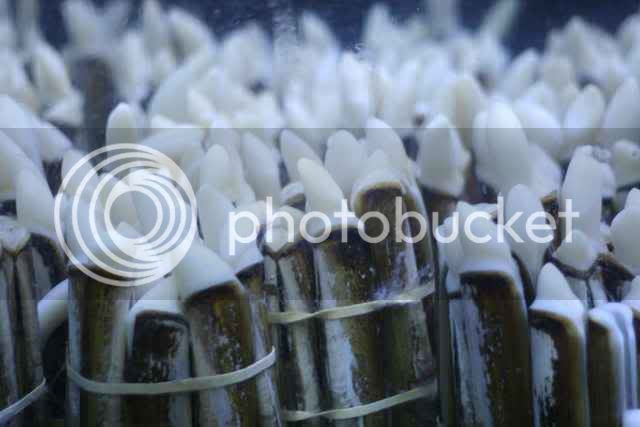 Live crabs these days will always remind me of Precious Pea, the Queen Of Crabs. This is the place of execution, just before it goes under the butcher's knife. 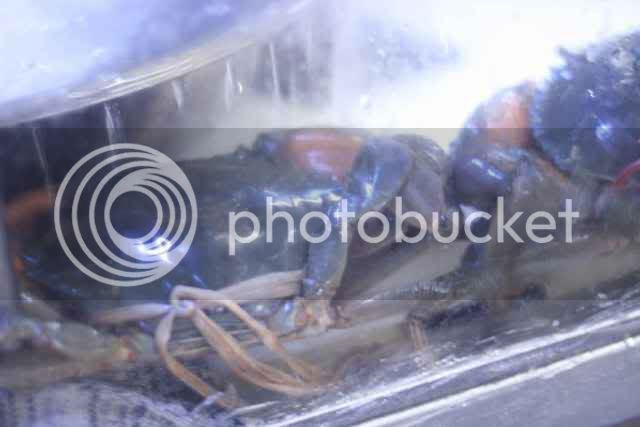 After watching that massacre, it was nice to return to some peaceful tofu, where no animals were harmed in preparation of the dish, except for some fish, I guess, since there is fish maw (I think that's what it is) on top of the spinach bean curd. I love the golden needle mushroom that accompany this dish. And the spinach within the bean curd is a brilliant way of getting kids to eat spinach....all of 0.01 milligrams of it. 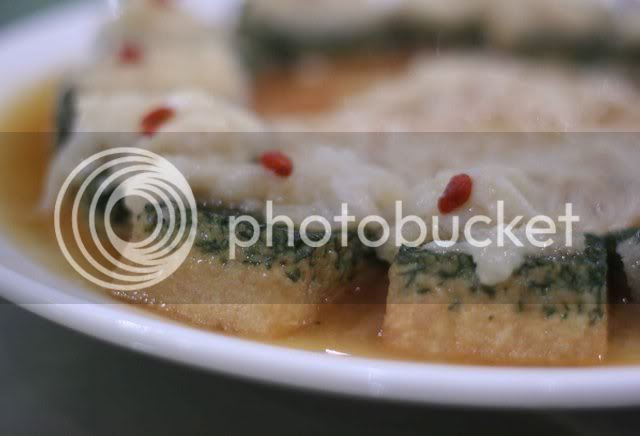 Kailan cooked two ways. I take my cap off to the chef who first thought of deep frying the kailan leaves into a crisp, so much so that vegetable averse children even chomp on it. Not sure if the oil from the deep frying has worse effects than not eating vegetables at all. 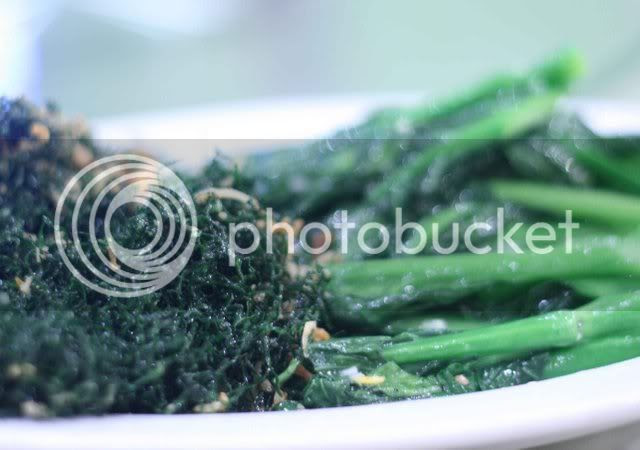 And still more vegetable. It's not the hymenia bean, but is the water convululus. Fried in shrimp paste. (Belacan). I dread it when this dish turns up super oily. But this one was okay. 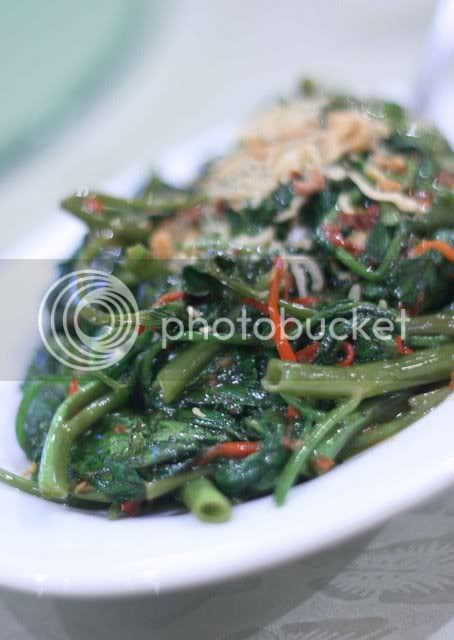 This Soon Hock Fish, (Bamboo Fish) was HUGE!!! Probably named Willy. The thing with soon hocks, the larger the fish, the firmer (and therefore better) the flesh. This was superb, and the flesh firm and sweet, perfectly steamed. 10/10 for this particular dish!!! 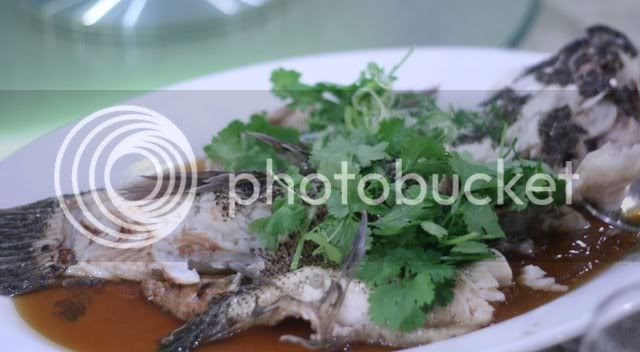 Just to give an idea of the scale of the fish. (Not the scales of the fish, the SCALE of the Fish in relation to size)

CRABS. Yummy. But actually I am O/D-ing on these salted egg crab, and the next time I have crabs, I think I want them plainly steamed. 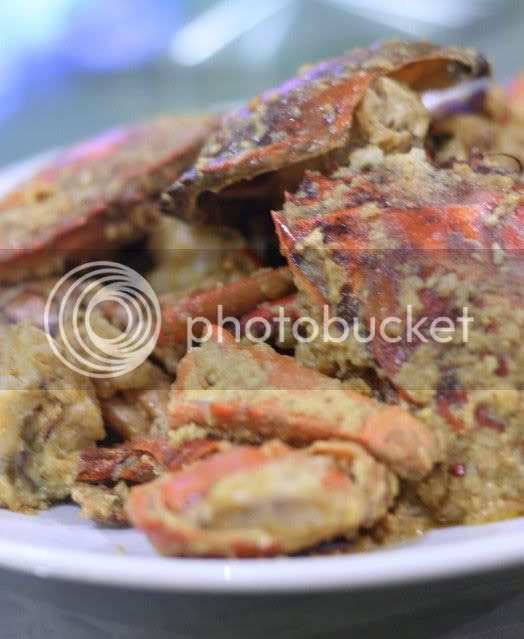 Eating crabs is a dangerous affair. I shed blood to do it. I hope Anne Bancroft doesn't need a magnifying glass to see the extent of my injuries. 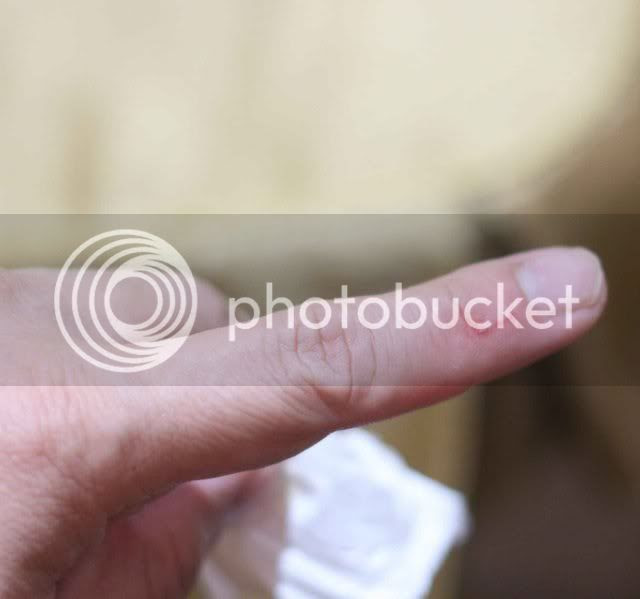 All Chinese birthdays must have noodles. So these were our birthday noodles. (oh incidentally the occasion was my nephew's 6th birthday). 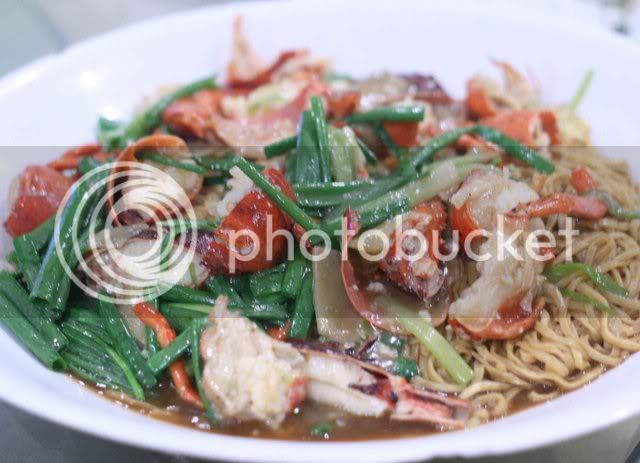 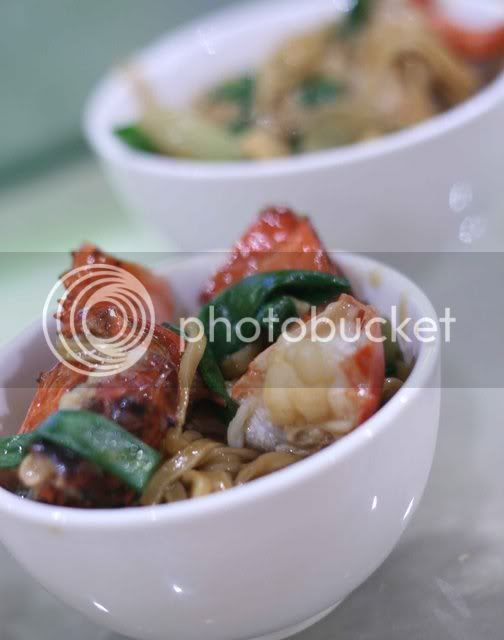 Superb. Boston lobster. What can I say. It was yummy!

And finally, a mint choc mousse cake, courtesy of Uncle here. Always a hit in the family, these mint cakes. 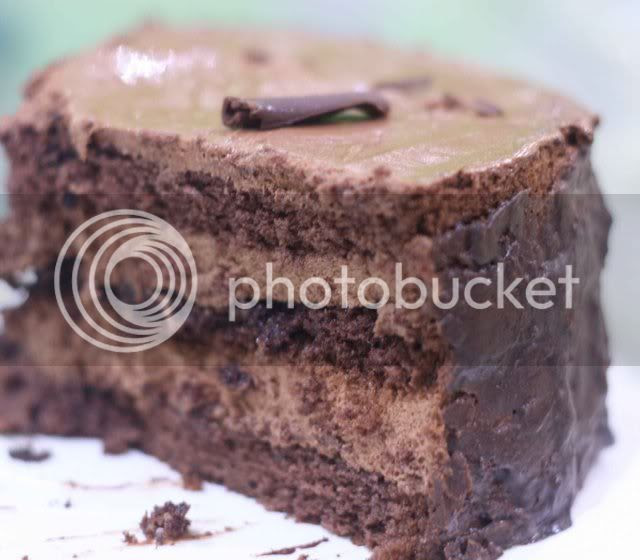 Actually, dinners at Chinese Restaurants are always better value, in my opinion, coz for starters, they don't charge corkage. For less than RM100 per head, you get far better food than say in a Western joint. (I'm not talking about hotel chinese restaurants).

Unique Seafood in PJ, along Jln Kemajuan, has also renovated their premises and have several rooms, that offer fairly nice ambience, even with karaoke. In our case, it was a win win situation. Bro in law wanted to watch the Singapore Grand Prix, (they have a flat screen in the room), there was plenty of space for the kids to run about, birthday boy could wield his new light sabre without killing any of the public, we had free flow wine with no corkage, and excellent food. What more can you ask for? Who needs candlelight and classical music and stuffy waiters....
Posted by fatboybakes at 10:52 AM

Aww, the sacrifice to feast on the winsome flesh of crabs... Well worth it, no?

The first half of this post, though... scary lah the pix... Like a B-grade movie: "It Came From Beneath the Sea!!!" Lol

Hahaha...it was really an enjoyable read..I was entertained by the way you told the whole story:)
For a moment I thought you were about to take only vegetables...hehe...but rub my eyes again, it's about seafood, ain't it..LOLz:D

Too bad about the cut on your hand...them bad salted egg crabs:p
And as usual, your cake looks great!~

it's rather interesting to note that both hymenia and convululus are parts of the V diet. Veganism, i mean..hehehehe...how yummy! :D

if poligon is a polygon, WHY EVEN BOTHER TO TRANSLATE IT? oooppss! Pada musim perayaan ini, kita harus saling bermaaf-maafan. Hehehehe...

hairy, that was precisely my point, and i was actually gonna write to the papers (AGAIN) but someone beat me to it. a very level headed malay guy/girl who even spends their free time tutoring the rural kids in english.

haha, why shouldnt hymenia and convulva be part of the Vegan diet?

christy, yalor, naughty crab hor. hehheh, thanks, the cake was rather yummy if i may say so myself. came home foraging for leftovers, but none liao.

LFB, i bet that place can be quite creepy at night, with the lights off, just the gurgling of the tanks, and some very unhappy sea creatures there.

Nic: The 'V' diet? Oh you kill me, bro! Which reminds me, I haven't tried that particular diet in a good while now...

is that really a good way of teaching ur kids? i suppose like father like son lor hor..

wah so luxurious..6 year old eat lobster noodles to celebrate..back then we b happy with blowing candles on a cake!

Very true about better value at Chinese restaurants. So what if the tablecloths are often rattier, the tableware plastic and the napkin made of sandpaper? The food's the shiz and it doesn't break the bank!

550ml JOF, yalar, and in this case, the ambience is actually passable!!! so what a win win situation!!! only thing is, might have to compete with the hokkien or hakka karaoke sessions in neighbouring rooms.

nipples, NOOO LA, kids eat mee kosong ler. and the birthday boy, unlike MY kids, is skinny as a rake, have to tie him down to feed one. as for teaching methods, haha, well, ..... you know what they say about standard of education these days ler.

blardy'ell, you seem to have more cuts than an actress on the dole.

FBB, you kena tag. Do join in!

Ouch, sorry abt your cut, mate!

i know what you mean about this place... by boss' fav location for co. dina.. haha.. i fear i am immune to GWIDUCK! hahaha

Guess what, you've just been tagged ...

the geoducks are actually quite good, although Iketeru spells them gyuduck. gweduc/gweduck is the original spelling. :P

I had once crab cooked in their superior stock. Very very nice. Try that next time, better than salted egg.

Ayo, almost missed this post. Thanks for the considerably visible crab prick wound. I have new multi-focals, by the way. ;-)
I too suffer from being itchily pricked by crab spikes - darn annoying. But thank goodness the crab meat is so delicious, or I wouldn't even touch them with a 10-inch chopstick.
You had me drooling over the soon hock and ee-yer-ing over the Gui-duck (thanks for pronunciation lesson!) and bamboo whatchamacallits. Reminded me of my extinct scuba-diving days, not that I saw any then.

P.S. Since Nic is into organically named veggies/plants, why not throw in the clitoria flower as well? (You know that blue one used to colour glutinous rice eaten with kaya.)

argie, i KNEW i forgot a plant!!! we had spawned a whole conversation with james of oz over clitoria.
those bamboo clams are delish...i've not tried the scottish ones, but the local ones, taste like elongated lala.

oh, henry, where do they originate?
gweduc i mean?

OMIGOODNESS, i never replied any of the comments in this post ah? GASP.

julian see foo, i guess its too late to tell you i've done my meme.

ciki, u are immune to gwiduck? meaning?

AWOL, actresses on doles get lots of cuts meh?