For someone avowedly not into Pavlovas, I certainly seem to have been making a lot of them recently.

For starters, I sold my first Pav, thanks to OJW for the order....He ordered a pav for a birthday, but later on text me to say that he decided to give it to his girlfriends instead. Isn't that sweet. I hope it wasn't coz the tectonic plates in the pav shifted, causing a massive landslide. I have found that since I use fresh cream for the pavs, the cream tends to melt rather quickly if not refrigerated well. 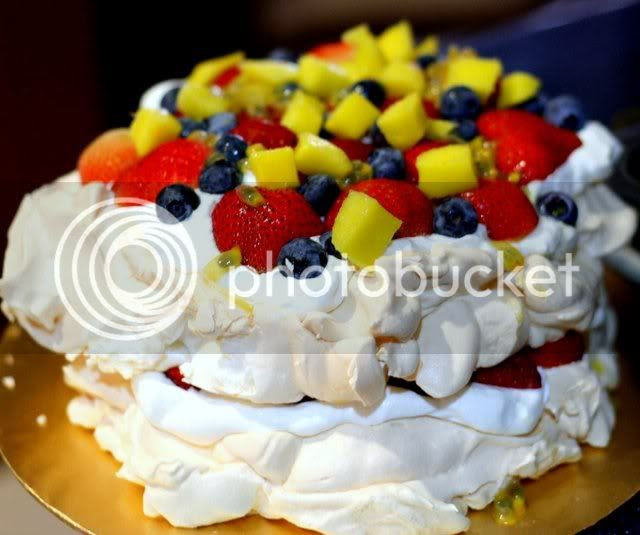 I like to make them in two discs, coz I find the meringue very sweet, and the sandwiching of the two discs gives me a chance to try with various fillings. I used to use the same lemon curd as I did for lemon meringue pie, coz it's a good way to use up the egg yolks, but found that some people are averse to sourness. Anyway, for this virginal commercial Pav, I used fresh whipping cream. The yellow bits were mango, for color, as OJW did not like the smell of jackfruit.

And recently, again, at a friend's Mid Autumn Festival Party, I decided to bring a predominantly yellow Pavlova, since it is the Moon Festival as well. I remember my late ancestors praying to the moon...I can't remember it's significance.

Alright, what do you get when you combine one of my favourite desserts, a Peach Melba, with a Pavlova? A MELBALOVA. (the song, Mr Boombastic suddenly plays in my head. Mr Lova Lova)

Which is what I did for this one here. I made a creme patiserrie, using the egg yolks, and used peaches as the main fruit. 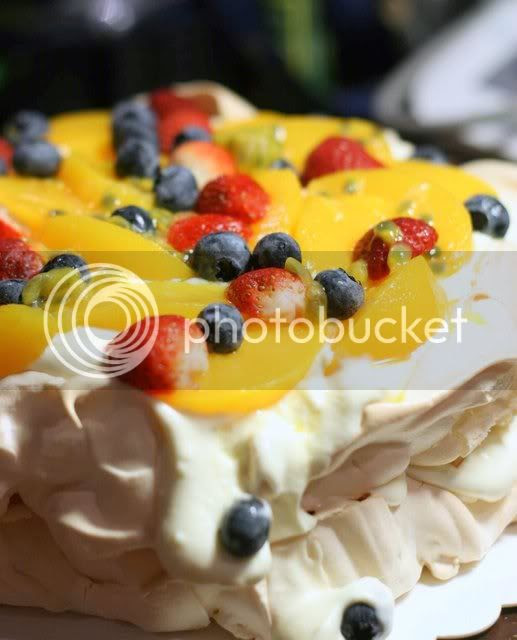 It was a smashing success with the dinner guests, but with dinner guests, you can never really know if they're being polite or not. However, the same problem, the creme patisserie was melting rather quickly. Perhaps it wasn't beaten stiff enough, but by the end of it, whatever left of Melbalova was swimming in a sea of pastry cream, fruit and meringue.

As we've had our Pavs served in a far more distorted fashion before, I have resigned myself to the function over form theory.....WMW very brutally told me, "your desserts taste good, but fail in the looks department".

I've always had a phobia of burning custards, because that's how my custards usually end up, BURNT. And making pastry cream (creme patisserie) involves patiently stirring the custard in a pot over a low fire. However, once you succeed, especially when using real vanilla pods, it is a dark day when you have to resort to instant custard again.

After tweaking a bit, here's my creme patisserie recipe:

300ml milk, brought to a light boil, with the vanilla seeds and pod split.

Pour a bit of the hot milk into the egg mixture, whisk together to stabilise. Slowly pour in the rest, constantly stirring.

Put back the entire mixture into the saucepan, and heat over low heat, until the mixture thickens.

You should get a gloriously yummy thickish sauce like the one below. At this stage, this can be used as a yummy topping on anything, really, apple pie, cake, trifle, or eaten just like that.

To finally transform it into a thicker cream, fold in 1 cup of whipped cream (whipped till thick), and lo and behold, a yummy, natural pastry cream. Oh, of course, refrigerate the custard mixture before incorporating the cream. 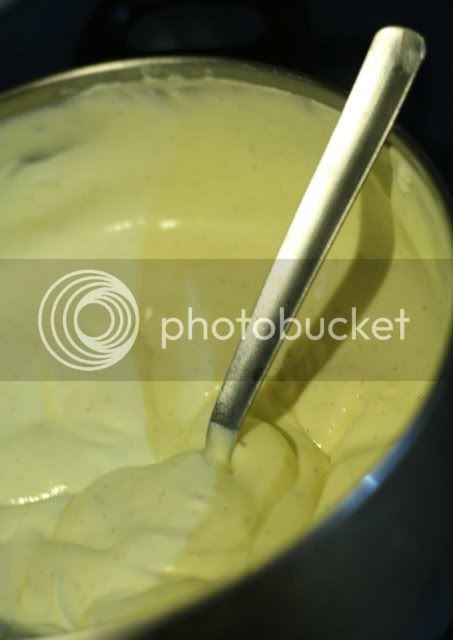 One of the best ways to use pastry cream, I reckon, is to stuff them into choux pastry. While my choux may not be as nice as Beard Papa's, the pastry cream certainly is comparable, and the entire taste is rather good, if I may say so myself. I served this at home group, and one of my friends took a bite from her husband, saying they'll share. After one bite, her eyes lit up, and she said, "yummm", and went to get her own. (she didn't know I made them). 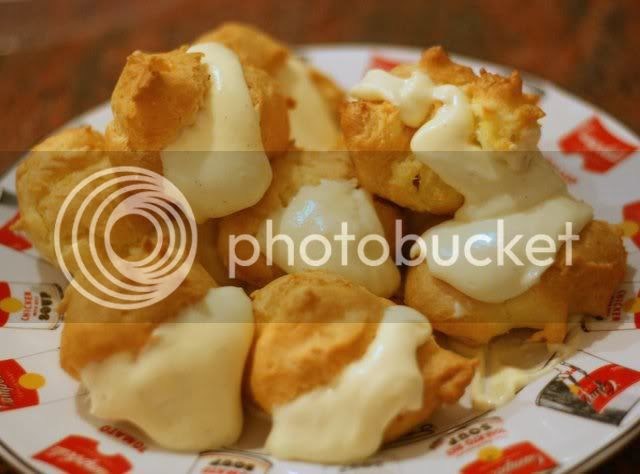 So there you go, a good way to maximise your eggs....separating the whites from the yolk.
Posted by fatboybakes at 1:41 PM

Btw, did Janvier ordered the Hazelnut Torte (I hope it's correct) from you? Can we pick it on 20th Sept? Will let you know the time later yah, thank kiu ^^

LOVELY...that's always my single word whenever I see your cakes:)

christy, awww, thanks so much for the encouragement.

jason, i dunno la, if it really did slide. so far mine havent slidden, i'm just speculating.

Pavs are tricky since they gotta be refrigerated straight away. But hey, I still love your pavs, fatboybakes! Lots and lots and lots! Thanks for the egg yolk tip! And those cream puffs look delicious!

hey , ur pavlova looks pretty dude. i understand that sometime once the beauty of pastry been left outside for awhile , aint looks good anymore, those fruit were so pretty presented on top of ur pav, good job pal.

WOW! You are the Pavlova King, FBB. Sensational - and I am indeed shamed by my own pathetic efforts.

I would have loved to have seen a cut-away section though, to see what your meringue is like... I know... I am a pav voyeur! One day it will be a crime, but until then I am safe...

goodness me. That pav probably is the king of all pavs.

And u know what they say, looks doesnt matter it's the inner beauty that reigns......

both the pavs and cream puffs look so yummy! and the cream puffs.. the pastry cream's pratically oozing out and beckoning me *drools*

sc, heh heh, thanks. actually, that pastry cream with real vanilla bean, yummm, i could eat a bowl of it on its own...hmmm, that's what my son did anyway.

daphne, hahah, i dunno if that remark means the pav looks ugly, or good..(the 2nd half of your comment)... ;) hey, how come i didnt get to meet you when u were here?

steveky, you naughty boy you!! peeping into anna's insides. haha, i will try to remember to take a pic of the cross section, ....there must be one somewhere, let me see if i can dig one up of previous ones.

97C (how does one do a superscript "o" for the degree sign), thanks for dropping by. what a fascinating nickname. makes my mind race.... what does it mean? almost boiling?

LL, pavs are definitely a woman, if desserts had a gender. so finicky, crisp exterior, soft interor, have to have lots of makeup, ..... [running for cover from the onslaught of pro feminists]

HAHAHHA, 97C, i just checked your profile, you're a HORSE, TWO LUNAR CYCLES YOUNGER THAN I!!! and a saggitarrian. i suddenly feel very UNCLE.

who cares how the look, just make sure they taste good.

Or are you considering a new career as a pastry chef?

do u've BBQ LAND & STEAMBOAT BUFFET KUANG's phone no at SG BULOH, SELANGOR @ been there? some said d price just below rm20/pax!

having the honour of tasting your pavlova, i must say it's fabulous. presentation is important when it comes to commercialisation, i must say. but for me, lardy hokkien mee will always taste good whether it's served on a 10 grand hermes plate or on cheap melamine. ooppps, that's a rather sensitive word these days...

simon, heh heh, thanks. not as tantalizing as all the gorgeous starlets you hang out with.

hairy, guffaw, i dunno if there was a backhanded insult/anti-compliment (insult sounds a bit strong la) there somewhere....

mal handsome, sorry la, i dunno where this place is that you're talking about mate.

henry, nope, no change in career. i think doing it full time for me is a sure way of killing the passion. even when i get more than 5 orders a day i oridi feel crotchety.

helo helo ! am back! didn't suffer from the dreaded delhi belly.. but have OD-ed on Indian food for sure.. Hit me with the Pavlova.. Melbalova.. whatever.. I need! lol

Yummy, your choux made me nostalgic for my first Daring Bakers challenge. Yeah, pastry cream made from scratch is so much better than the instant custard stuff - especially if you stir in melted white choc. ^_^

I've never made creme patisserie (hangs head in shame) so thank you thank you for the recipe. I have some frozen choux pastry already piped in the freezer for dessert emergencies. Yay!

The Pav looks pretty darn good to me.

you making me hungry la ... some more on the day that I am temaning my colleagues to puasa :PPPPPPP

should have known better than to visit a flog on fasting dayyyy :(((

kenneth, how very whats the word? empathetic? fasting with our muslim friends. how sweet of you.

dee, once u try the real thing, there's not turning back. i used to be a sceptic, about pastry cream vs fresh pure cream for eclairs or puffs, but i am now a convert, a pastry cremian.

argus, normal chocolate can or not? i not a white choc fan, even the good ones.

ciki, ciki, we MISSED you babes. LOVE your delhi writeup. so riveting. usually i cant read long text ... (oh, those without pictures especially), but i lapped your up. (text, i mean)

Can, can. Milk choc, dark choc, bittersweet choc - up to you. Can even add a teaspoon of instant coffee dissolved in a tablespoon of hot water for that mocha flavour - if you like.

do u think this article is RACIST?

so our country will b in HARMONY, 4ever...