Friday nights are usually cell group nights for me, ....as in bible study, etc. However last friday, it was cancelled, but as they say, (in the Sound of Music), when God closes a door, He opens a window. So, when Jackson asked if I was free, I was quite happy to say, YES, coz when a restaurant owner asks if you're free, usually it should follow the next sentence is about food.

So yeah, we were invited to sample the Ramadhan spread at Pick N Brew. To be brutally honest, I think their location is really disadvantageous, tucked away in the furthest corner of the old wing of 1 utama, just at the entrance to One World Hotel. Anyone randomly looking for a place to eat would have succumbed way before then, to the array of restaurants that line the way enroute to Pick N Brew. Which is a darn shame, because the food is ACTUALLY rather palatable. And their famed coffee, which I haven't tried, sounds really good as well. (I always go at night, and this uncle cannot drink coffee at night la).

I arrived in good time, the food was all pretty much still intact, and hadn't been taken by ravenous good Muslims waiting to break fast. Precious Pea and WMW were already there, and had already done their work. 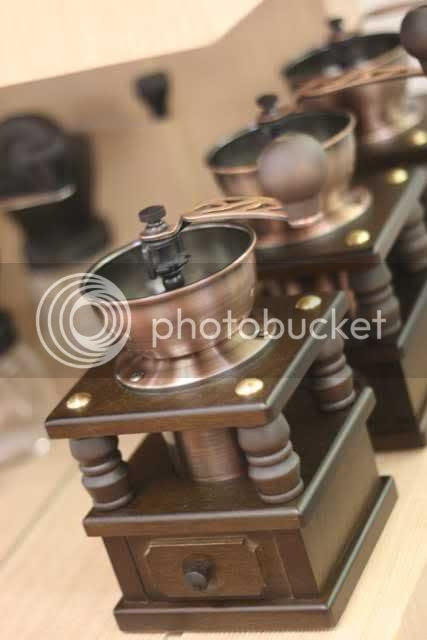 I couldn't get a sharp picture of these cute little coffee grinders the first time I was there.

The salads and dessert are placed on the same table. Very attractive combination of colors, this table had. 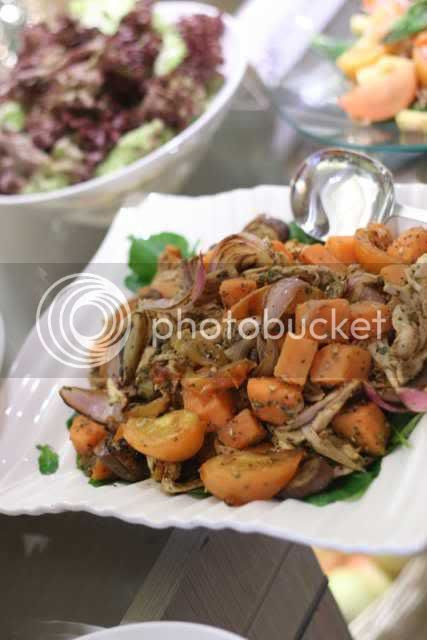 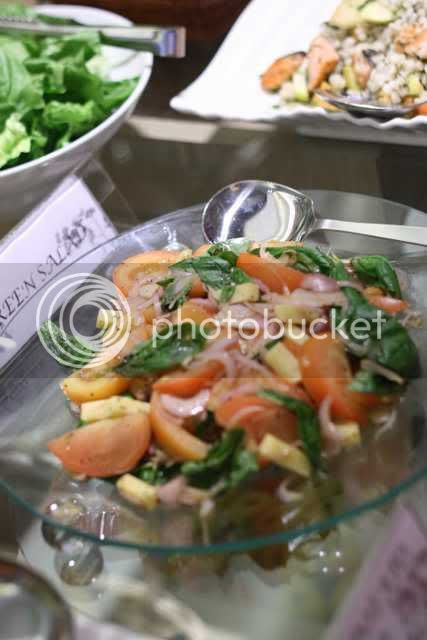 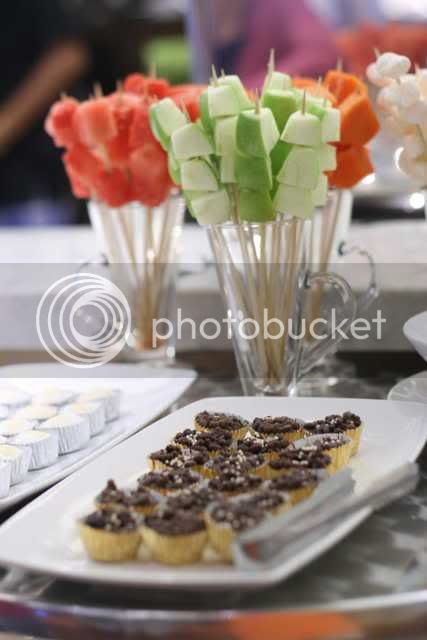 There's even a chocolate fondue!

For the mains, there is an offering of tomato rice, which was very good, breaded beef, which was erm..... (I'd skip it the next time), and some grilled chicken dish, which was also rather tasty. The offerings included sambal sotong, lamb rendang, etc, which are better documented in WMW and Precious Pea's posts, as I am quite bad with detail. I even missed out completely the nasi ulam which I just saw on their blog. Where was it?!!! I didn't even see it. Maybe it's true, Women are from Pluto and Men from Mars. That's why they love Plutonic friendships. 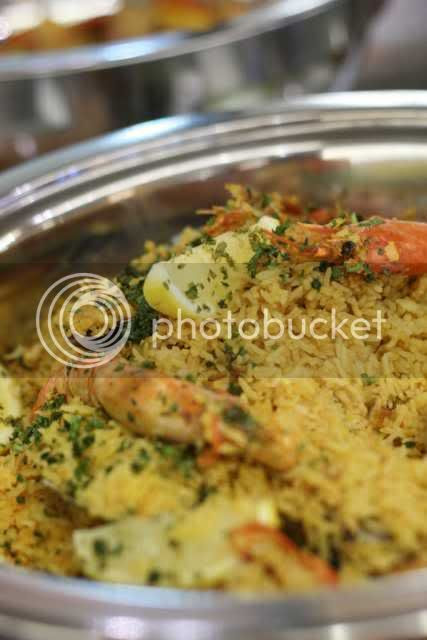 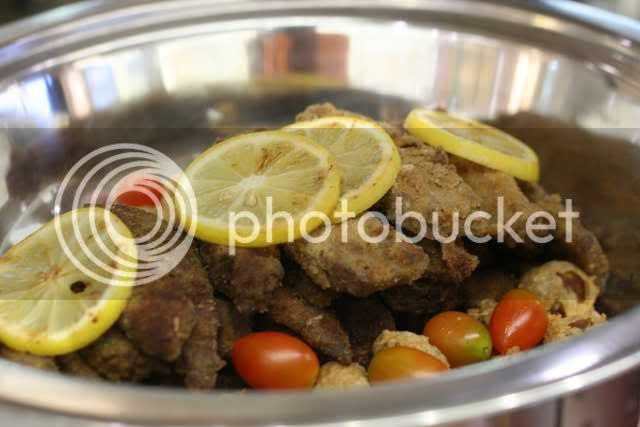 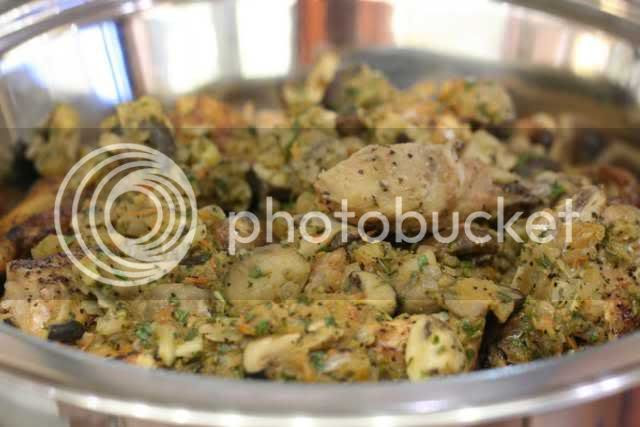 The desserts were yummy. I ABSOLUTELY LURVED this ketayap. The skin wasn't too thick, and tough, and the coconut filling just the right taste. Nor was it artificially colored to toxic green, leaving a pleasant natural flavour to it. 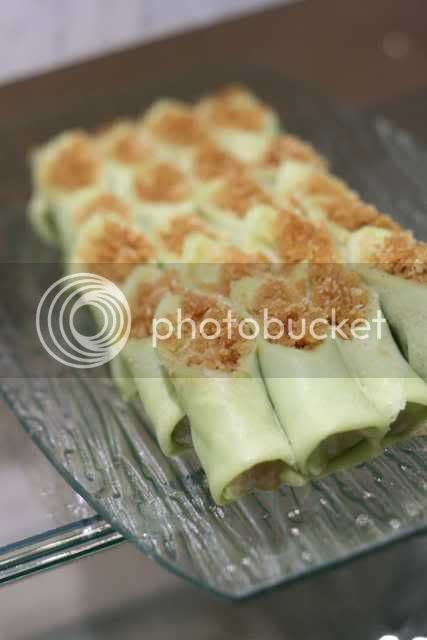 Actually I have other pics of the desserts, but I must have forgotten to upload them to photobucket, so later....

Actually, located in an obscure corner, is my favourite counter, the starters. Laksa Johor, Vegetable fritters, Roti Jala, Kerabu, Ulams, Acar. The ulam is ABSOLUTELY yummy, and the belacan phwahhh, a lot of kick. The petai, (hymenia eh, Ciki, wink wink), plus the four angled bean and boiled pucuk ubi were great, and reminded me of the days of yore, when life was simple, and a plate of rice, ulam and sardines is the gateway to contentment. 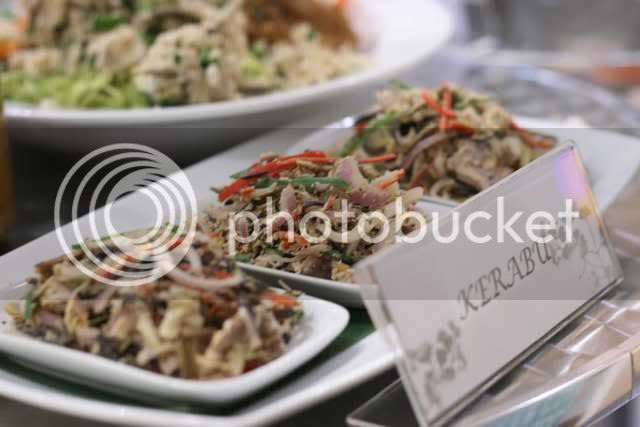 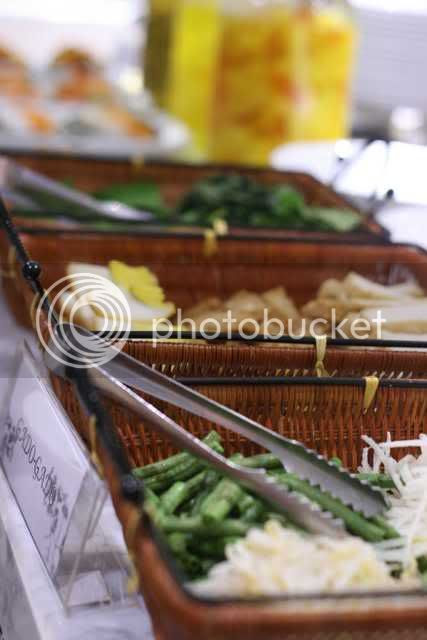 Ah, the gado gado was nice too. The satay sauce that accompanied it was perfect. 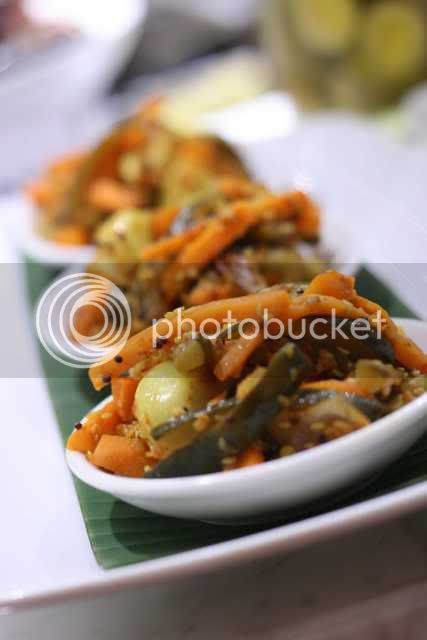 Acar ...which I didn't try. Actually, a rather healthy buffet, lots of vegetables to choose from. 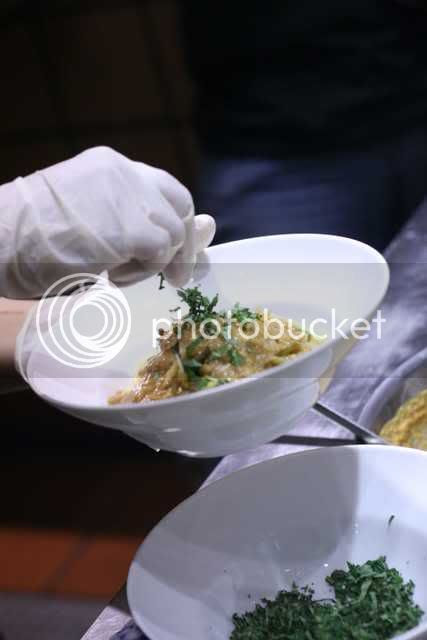 The laksa johor, which was nice. I opted for yellow mee instead of spaghetti. Ah, my only gripe is that the soup wasn't hot enough. Nor was the teh tarik. But apparently it's only the Chinese flers who want to cook their throats while drinking soup and teh tarik. 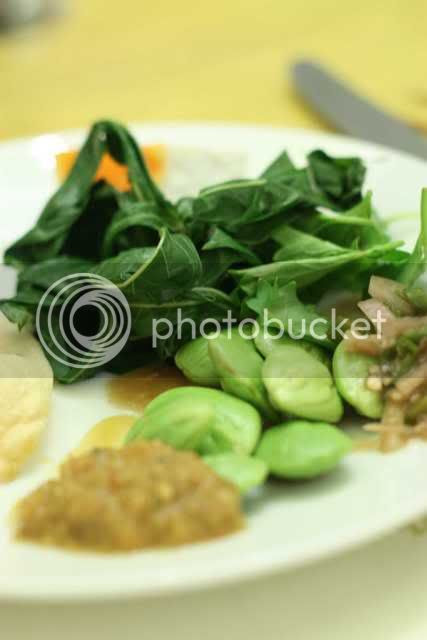 Look at that plate of pure goodness. Petai, Pucuk ubi, sambal belacan. I think I am a closet Bumiputera....

Anyway, hurry on to Pick N Brew, at RM38++, it's fair value, and good variety. It's very crowded at their Shah Alam outlet, but the 1 utama one is a bit quieter, which is a real pity, coz I reckon its good stuff. They are not offering their ala carte menu during this period though, so don't expect that mousakka stuff. 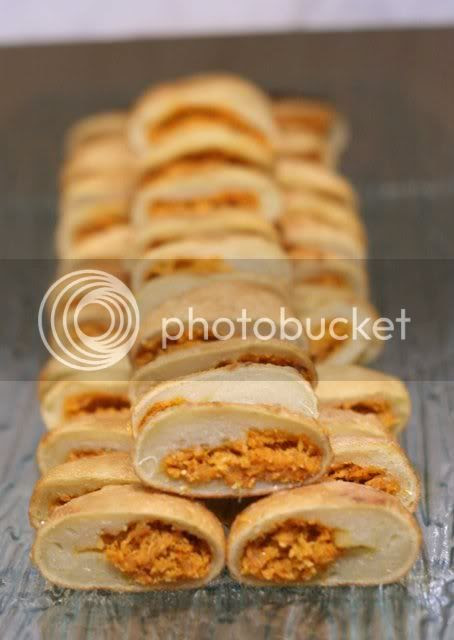 Can't remember what these Malay Kueh is called, but its the one with the savoury coconut filling. 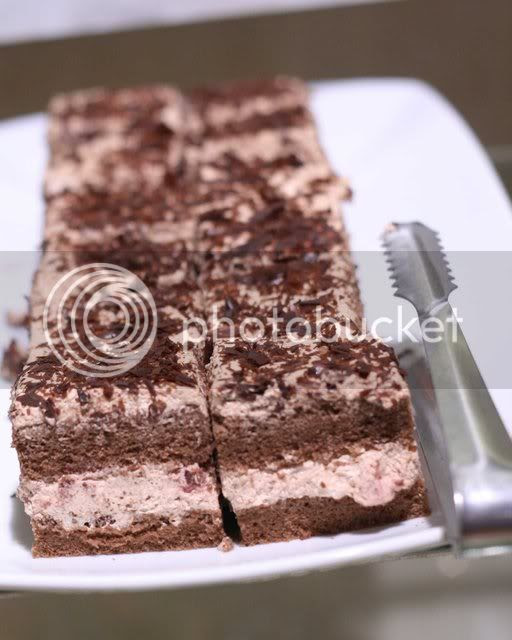 Chocolate Cake, I presume. Or possibly blackforest of sorts. 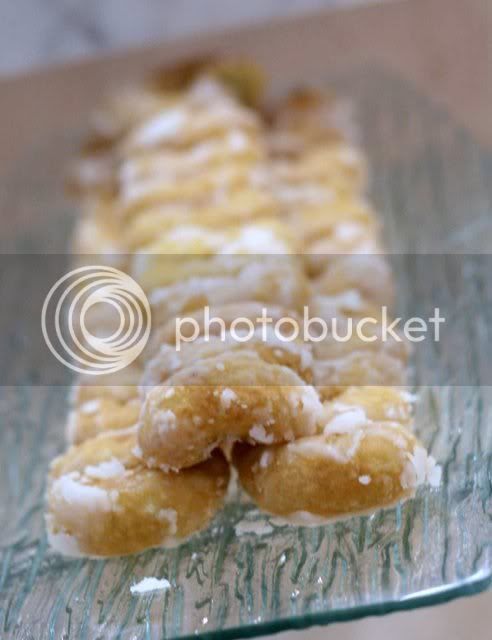 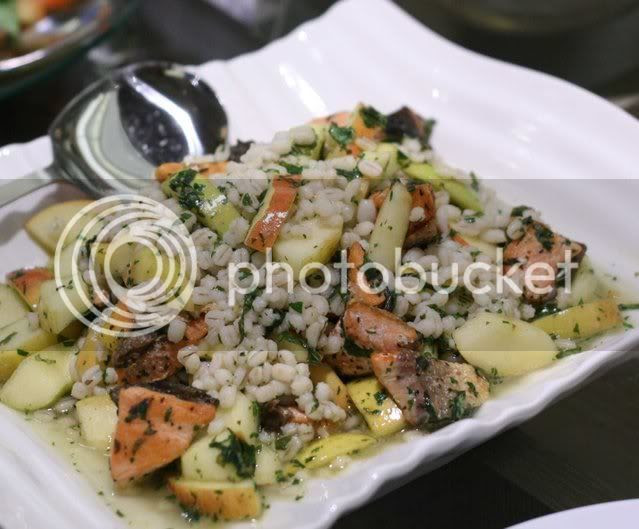 The plate of barley salad. Darn, forgot to try. 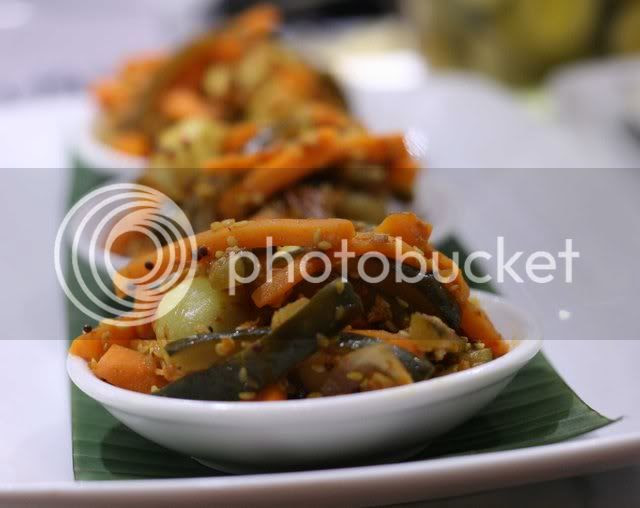 The acar looks delicious, with all its myriad colours. 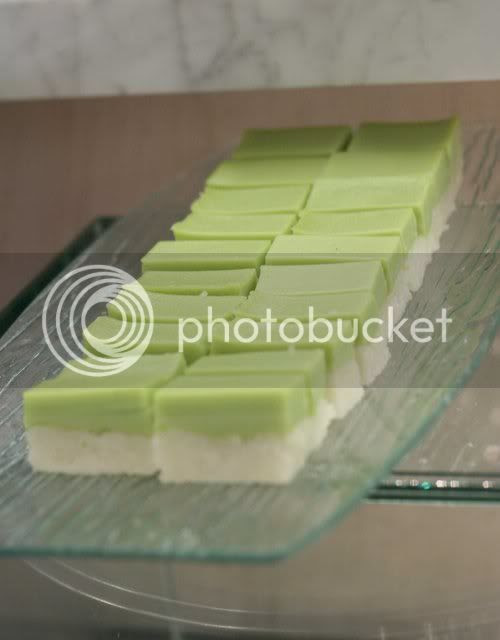 MMMM, my favourite. Kueh Seri Muka. The pulut was nice and soft, without being soggy, whilst the green topping wasn't overly sweet, but very creamy and coconutty. Yum.

omg! you had hymenia! out of curiosity, i yahooed (not really different from google, me thinks) for the word hymenia. and good gawd! here are a list of things associated with it:
1) a breed of female horse
2) a spore-bearing fungi
3) a wedding dance
4) a butterfly/moth (Hymenia recurvalis)
5) a female member of http://www.funadvice.co.in

ooohhh, and the best part about yahoo is, they have this "Also try" option where they list down the other possible inputs one might have mispelt. so, while searching for hymenia, yahoo suggested:

omg! so sorry! i forgot to comment on the food! haha!

a very delicious-looking spread there! i think if i were there, i would have sapued the nasi ulam which looked amazing (from PP and WMW).

hahaha..goes to show how much food there was rite..aiyoh by the time im free..i think their buka puasa sudah habis and time to dance to hari raya songs d..

While I managed to take pic of the nasi ulam, am wondering why I missed tasting it. *kicking myself*

hairy, for a moment, i thought, huh? a singapore bearing fungi? forgot that SPORE is word on its own right, coz we were taught it as SPORA. duhhhh. see lah, S&M in ENGLISH please.

i swear they MUST have sapued the nasi ulam, coz how could i miss a madonna mound such as that?!!!

precious pea, if not you, then who ah?

Lol at nic(khkl)'s research. There's no limit to things one can learn from foodblogs.

Oh my that chocolate fondue was sooooooo beautifully presented. I love that the sticks had lots of little chunks on rather than one big one. I'm stealing that idea and claiming it as my own!

Aiyah...Women from Pluto, Not Venus meh??? That's your own teaching is it? The mountain of rice was there right in front of you, in front of the laksa counter.

Indeed, men are from Mars. I didn't see the Nasi Ulam too!

Maybe someone should draw up a map to the nasi ulam counter.

besides, eat until you drop then exercise until it pops.

henry, exercise until what pops?

jason, strange hor. how could we have missed such a mountainous region...

wmw, actually i think women are from several planets. the only thing consistent about them is they're inconsistent...[bracing oneself for the backlash]...i'm kidding, i'm kidding!!! DONT KILL THE MESSENGER.

caked crusader, my lips are sealed. the idea shall indeed be credited to you!

Yeah, it's a bummer when buffet food is not kept warm enough, ya? Is it really a Chinese thing to crave food freshly cooked and served while still hot? (or at least reheated?) 'Coz at Rebung (off Jln Ma'arof/Jln Bangsar) I thought the spread was wonderful but not kept hot enough.

thx for coming and blog about it. NExt time u come over, i let u try the Nasi Ulam for free..

I think you're right about the location. Pity, since the food is so palatable, lol ;)

Ramadhan always makes me fat - 3 square meals and a buka puasa feast smack in the middle usually require my own fast the month after.

dee, yalar, that's why we need to help out our pals and publicize it for them. afterall, msians have been known to travel to the arse end of the world for good food....
i know, ramadhan is tough on us non muslims right!!!!


jackson, i think the next time i go, i really should pay for something...malu la.

argus, but apparently our malay brethren like their food lukewarm, hence the room temperature stuff...echerlly, piping hot stuff aint good for the throat i hear...but i don't care, i need my soups, porridge, noodles all HOT HOT HOT.

fbb, the pics are really nice testimony of the good food at Pick n Brew; seems there is so much to eat

Memang strange... someone must have sapu-ed them before us.

yeah joe by the time my salary is out Ramadan is over lol.

Hahaha...this is related back to the attention span of men. Maybe that plate of nasi ulam would have caught your attention if it was wearing a skirt! :p

wmw, assuming cik mek molek ulam face IS a woman, then she'd have caught our attention if she WASN'T wearing a skirt...