Wow, my food blogging idol, Boolicious of Masak Masak, was also featured over the weekend in the Sunday Star. And the article's even longer than that of AWOL. (A WHIFF OF LEMONGRASS). Although spanning 1½ pages, (that's worth like tens of thousands of ringgit, if you were to buy the space in the Star), none of the photographs actually feature the elusive Goddess of the Blogging Realm. So tough titties, fans of Masak Masak, if you are hoping to catch a glimpse of her (the lady in the tudung slaving over the stove is NOT Boolicious). Special thanks to Babe in the City KL for pointing out that Boolicous was featured. 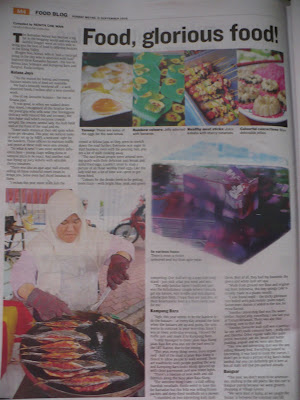 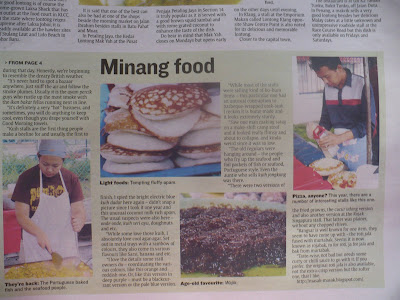 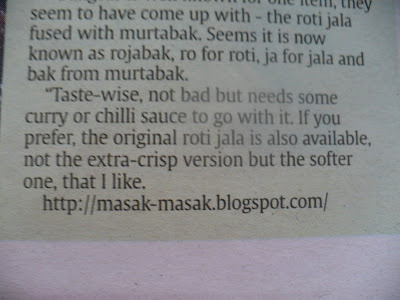 And for the benefit of aunties who might need magnifying glass, I have enlarged the portion of the article that shows the blog link to masak-masak.
Posted by fatboybakes at 9:53 AM

Masak2's writeups on the ramadhan bazaars are the most comprehensive I've seen. Congratulations, Boo!! :-)

awesome! i think LL and MM can start writing a book together already! of course, with FBB as the editor lar ;D

oh, the lumins...hey, i remember reading this as well...

wah..we should suggest the Star: a floggers pullout... hahaha..famousnya..i feel so honoured to have been dining and drinking with them..

wahhhh ... so happy to see that food blogging is getting so much recognitino nowadays!

lianne, in germany how? got appear in papers or notch? u should be very exotic there ma, just throw a little bit of lemongrass, kaffir lime leaf, screwpine, and presto, its an equatorial salad.

nipples, yalar, i also feel so honored hor. some more TWO on the one table at the same time.

hairy, gasp, i never knew about that post by jackson ya know. i should thank him. how on urf did you remember reading that? u dunno me yet wat that time.

kenneth, haha, yup, that's me, the PR person for the luminaries.

AWOL, (i'm amazed i've never called u that before), yup, it was them ramadan posts that led me to you...if i didnt read her ramadan post, i might not have been hooked, and idolised boo, and by extrapolation, might not have met you.

oh, fbb, i read that a good few months back. it was linked from another link which i've forgotten d...

Thanks for highlighting this in yr blog. I actually didn't read the papers on Sunday, as I was so busy. Only started digging for it after I read comments on the blog.

So honoured to know that I've seen & ate with all of you at least twice in my humble lifetime. Starstruck. =D

I can't wait for FBB's cakes to be showcased on the Star!!!

Wow, I am proud to be among all of you superstars!~ :)
Thanks for dropping by my blogs; although I've not met any of you in person yet...but I am still starstruck (like tummythoz)

Kudos to all the great bloggers...we should call for a celebration!~:D

Agree that Boo's posts on Ramadan bazaar is one of the best. Congrats again!

jason, yup, she IS good.

christy, yala, i also feel so honored to be amongst such celebrities.

henry, as WMW said, my cakes fail the aesthetic tests....so wont be in star la.

tummythoz, ya lor, i am starstruck too.

This aunty thanks you for the built-in magnifying glass. I popped over to masak-masak and was wowed by the colourful roti jala. Saw a pale version of Kuih Cara which I discovered recently (a friend taught me how to make it; my latest post).

Told you long ago you should write for the papers too. You're up there with AWOL etc.