Nothing like a midweek Wine Pairing Dinner to take away the midweek blues. Especially when the invitation comes from the wonderful people at Moet Hennessy Diageo and G2 PR.  One can always count on them to pick an interesting venue for a different dining experience, and sure enough, this time dinner was at Neo Tamarind.  I have not been to this neck of the woods in years, and I believe the last time I came here, it was an Italian restaurant...yes, it has been that long.  One of the reasons is the very thought of parking ALONG Jln Sultan Ismail is daunting, let alone braving the traffic.  However, to my pleasant surprise, neither was an issue, traffic was a breeze going into town, and parking was easy enough, just park at neighbouring Menara Hap Seng (very cheap too), and walk over, or if you're feeling luxurious, just valet park at the premises itself. 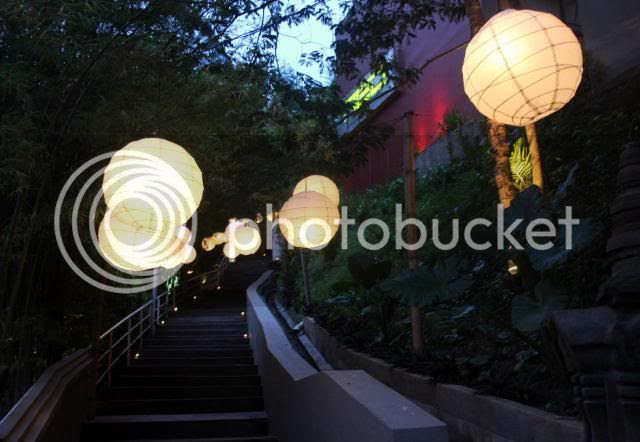 I bump into fellow bloggers, KY Speaks and Ei Ling (chocolate snob) at the foot of these stairs, but totally forget to take a picture of them, or with them. 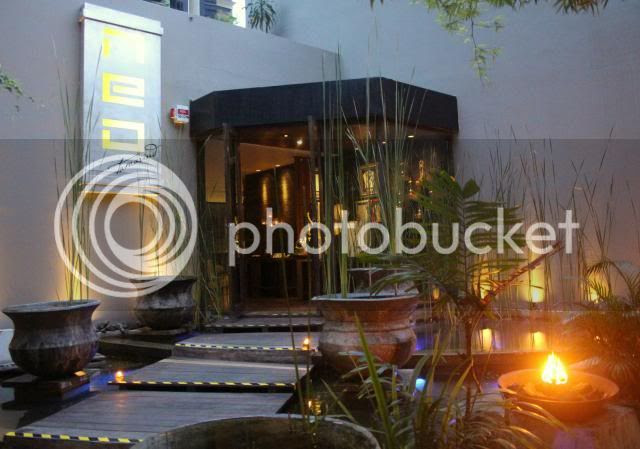 It's nice to see that such places still exist in the city centre, ie, private bungalows, or what used to be, housing a nice restaurant.  They're few and far between, which is a pity. 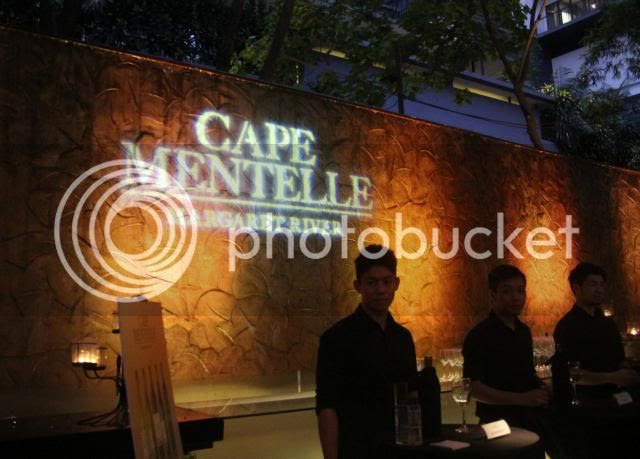 As I head STRAIGHT for the wine, I totally forget to photograph the event at the foyer, which is a blind tasting, of four varieties of Cape Mentelle Wines.  You do not wear a blindfold, but the bottles are covered, and you got to guess the sequence of the wines, which was  made up of a Sauvignon Blanc Semillon 2012, Chardonnay 2011, Cabernet Merlot 2010 and a  Shiraz 2011.  If you guessed the sequence correctly, you win a bottle of wine.  Sadly, due to my failing eyesight, (and not taste buds), I misread the labels on the poster, and wrote down cabernet sauvignon instead of cab merlot, hence forfeiting the chance at the free bottle, much to the stinging pain in my heart. 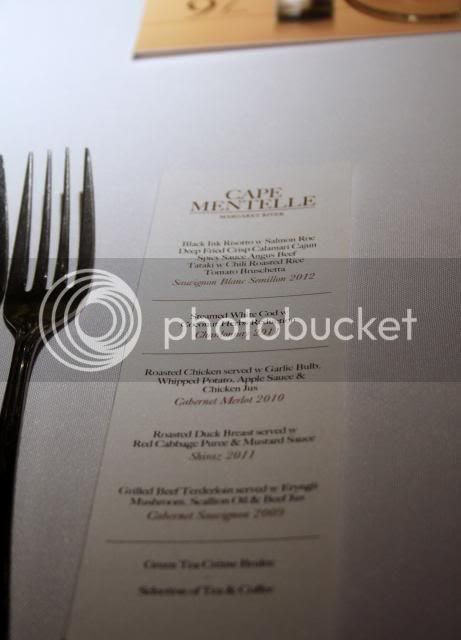 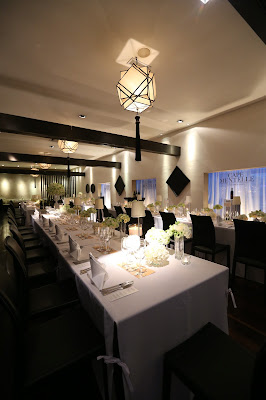 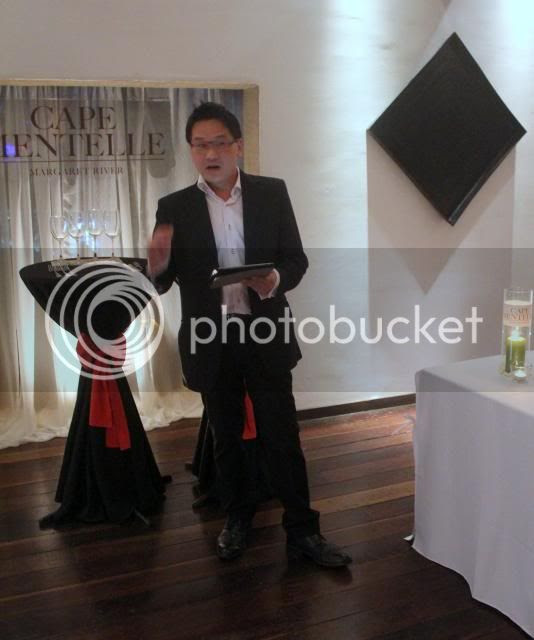 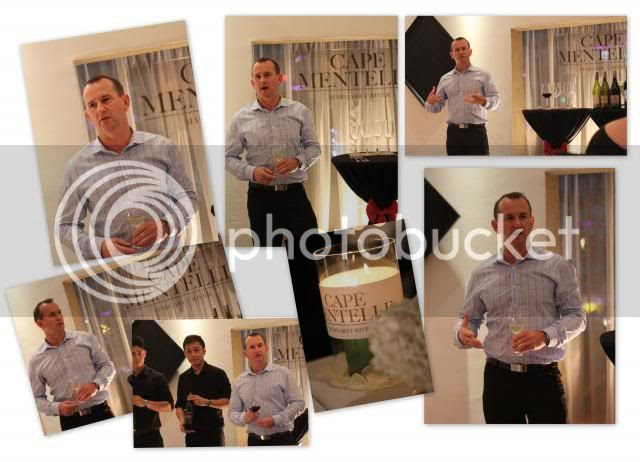 ASHLEY WOOD, VITICULTURIST, a Bachelor of Viticulture at Charles Sturt University in New South Wales,spent 12 years working in vineyards in Margaret River before joining the team at Cape Mentelle in 2007.  At this dinner, he regales us with the tasting notes of the different wines, and talks about them with an utmost contagious passion. 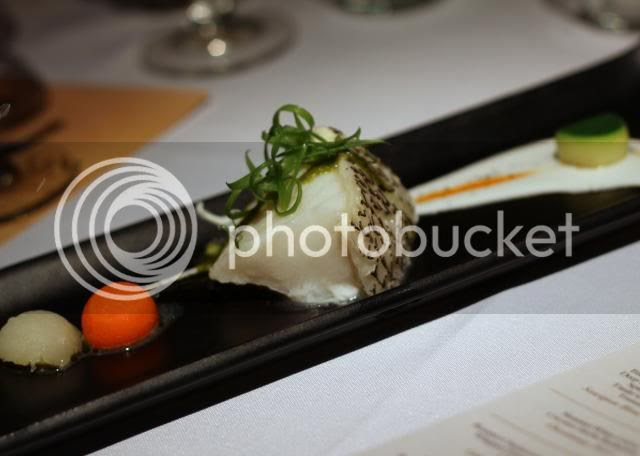 Steamed white cod paired with coconut herb reduction paired with the Chardonnay.  Oh, for canapes, there was a variety of foods, paired with the Sauvignon Blanc Semillon, which I much preferred over the chardonnay.  For some reason, I find savignon blancs generally crisper, the pale straw green hues appearance refreshing in our weather in particular.  The SBC is made up of 54% sauvignon blanc and 46% semillon.


The Chardonnay, on the other hand, paired with the Cod, (which incidentally was very well done.  The coconut herb reduction did not overpower the natural flavour of the cod, and the fish was fresh and cooked just right), did seem to be a good match.  The citrusy notes of the wine complement fish the way ...citrus does. 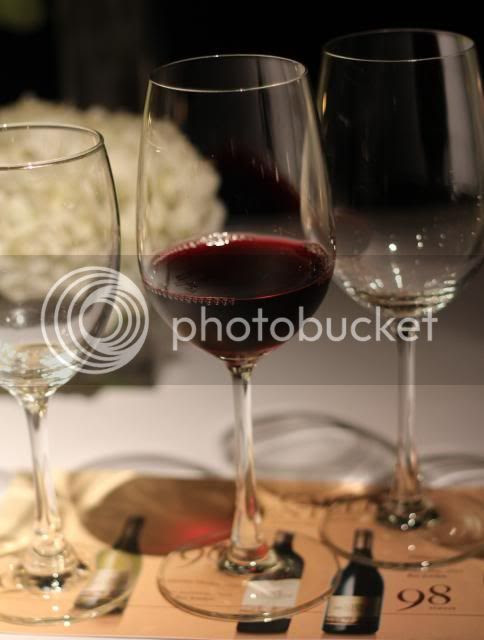 The Cabernet Merlot 2010 a bright, deep ruby red potion, comprising 44% cabernet sauvignon, 42% merlot, 7% cabernet franc, 6% petit verdot, 1% malbec.  It's what in my limited wine vocabulary I would consider a fairly full bodied wine, with a distinct but subtle tannin. 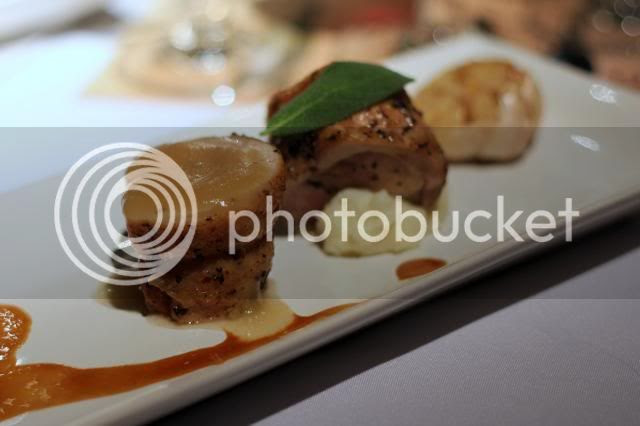 The Cabernet Merlot was paired with Roasted Chicken, Roasted Garlic bulb and whipped potatoes.  It was unanimously agreed on our side of the table that the roasted garlic bulb was outstanding.  The chicken was also moist and flavoursome, and the potatoes, that had been whipped into submission, were light and almost airy. 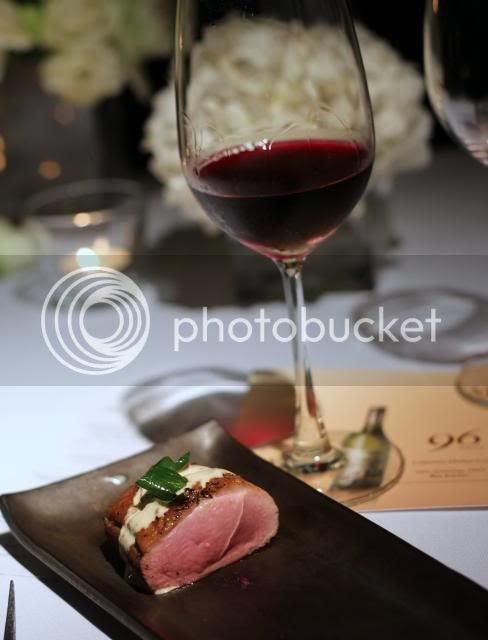 The Shiraz 2011 with the roasted duck breast was really a good match, like Sandy and Danny in Grease.  Fortunately, my breast was tender, (okay, that came out wrong), unlike KY's and Ei Ling's breasts which were apparently tough and chewy.  It was quite effortless, and I wouldn't have minded more breasts.  Of the two reds, I preferred the Shiraz.  It's dark purple hues and depth remind me of literature, (as opposed to tabloids, which some wines remind me of), and I guess the pairing with duck seems inexplicably French, and who I ask doesn't like all things French....except the English? 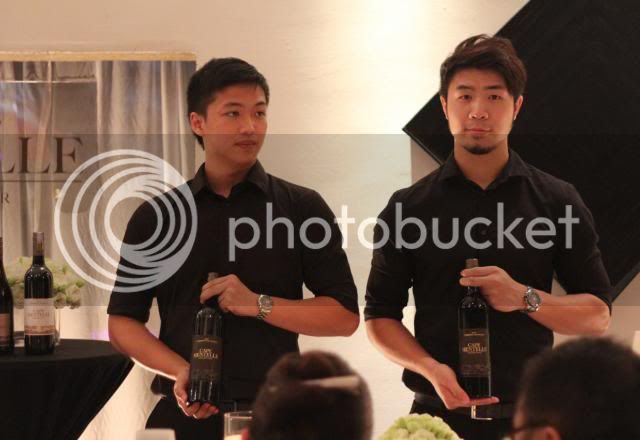 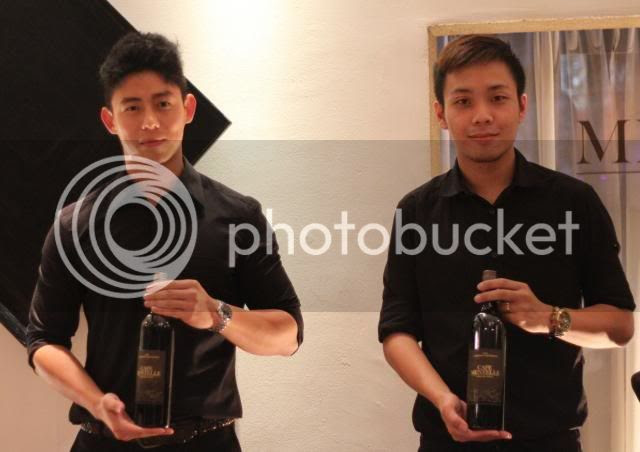 You may think these two pics strange, but very seldom do we get "male models" parading alcohol.  It has always been the ambit of chicks... so it was interesting to see these strapping young lads doing their thing.  A tribute to the male models. 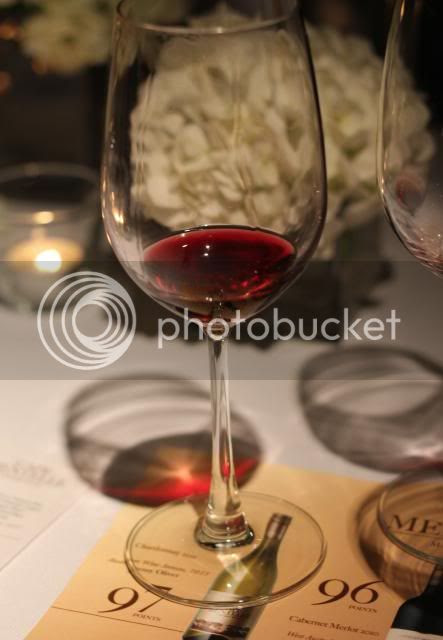 Finally, the piece de resistance for the night, since FOUR guys were parading the bottle, the dark, vibrant, ruby red Cabernet Sauvignon 2009, paired with a succulent piece of grilled Tenderloin, Ergyngii mushroom, scallion oil & beef jus.  You can see the full bodiness of the wine from the tears left on the glass after a swirl.  Each sip of the wine enhanced the taste of the tenderloin, and also contributed to the increased conviviality in the room.  The wine is made up of 97% cabernet sauvignon, 3% merlot. 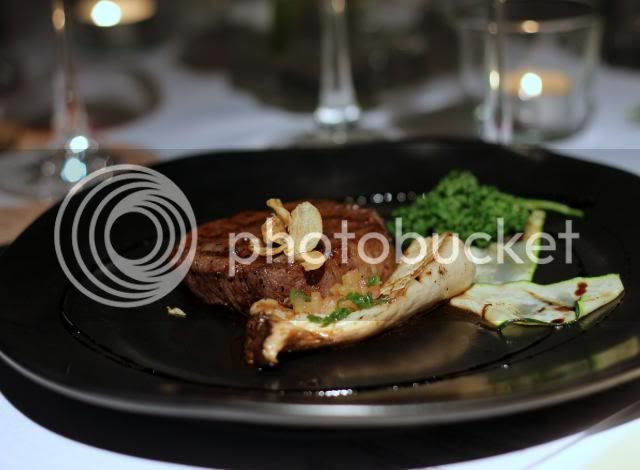 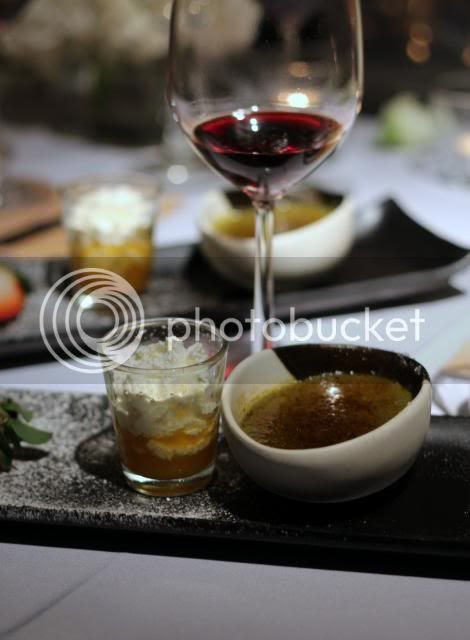 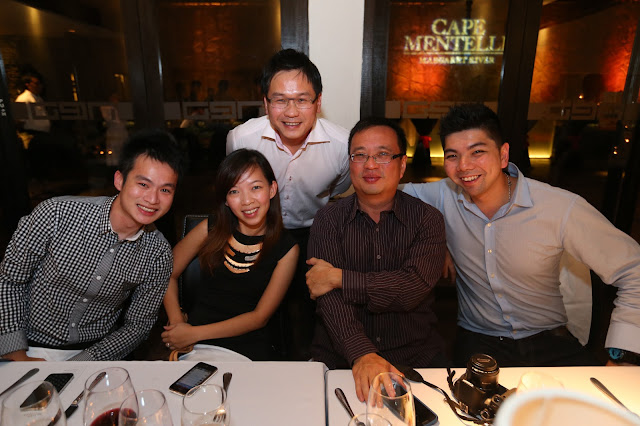 Twas also nice to catch up with old timer bloggers KgBoy & Citygal, who haven't aged a day since I first met them nearly 6 years ago.  With us is MHD Brand Ambassador Chong Kai Weng, and Taufulo.

Lovely event! We were there in Spirit.. was also guzzling cape mentelle in Sydney :P :P

good winery with a nice range of wines...