Actually, if you were to ask me where to go for Dim Sum, I'd have to think long and hard.  There are the usual staples, but say if you wanted something different, where would you go?  And by virtue of dabbling in this hobby, inevitably I do get asked quite often for food recommendations, and often, I am stumped.

So, if you were ask me now where to go for Dim Sum, I would actually recommend Imperial Pot, in Dutamas Solaris.  That place if you are not familiar with it, is a horrendous maze.  As you ascend from the bowels of the earth, where the carpark is, the levels do not follow a sequence understandable to humans.  It goes from B5, B4, B3 and possibly suddenly UG, UG1,...you get the drift.

If you are LOOKING at Solaris Dutamas from main road, ie, from Duta Tropika guard room, then Imperial Pot would be towards your far left, as the hill ascends, and is on the first level, which is the level above the road level of the perimeter road.

The first question I asked when Walauwei invited me was, "does Imperial Pot make you high too, like regular Pot?" ...okay, children below 18, please ignore that remark. 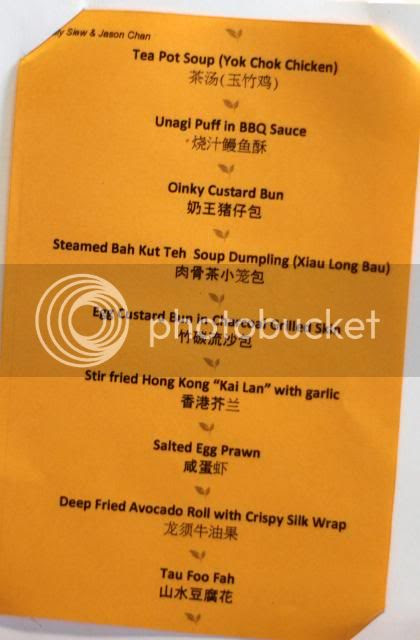 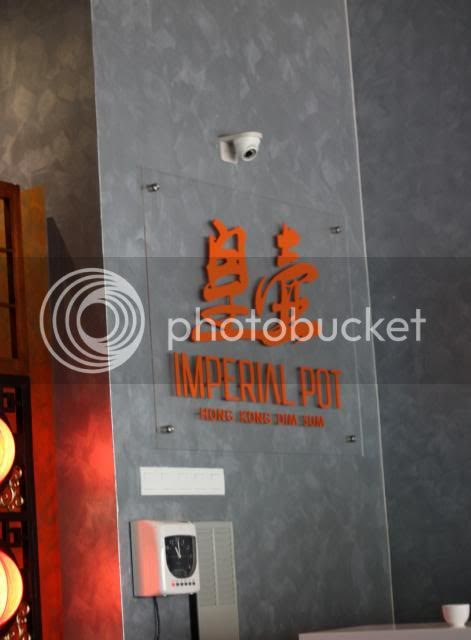 To kickstart a sleepy Saturday morning , a variety of soups of aphrodisiac and energizing qualities....ranging from American ginseng, I'm guessing angelica,wolfenberry and all the other things "pou".  They're served elegantly in tea pots, poured into miniscule cups, (like the ones in bak kut teh shops, and proper tea houses), so bottoms upping is no problem.  Different assortments of meats are available as well, chicken and pork.  Apparently that's where the name Imperial Pot is derived.  I must have missed this part of the preamble. 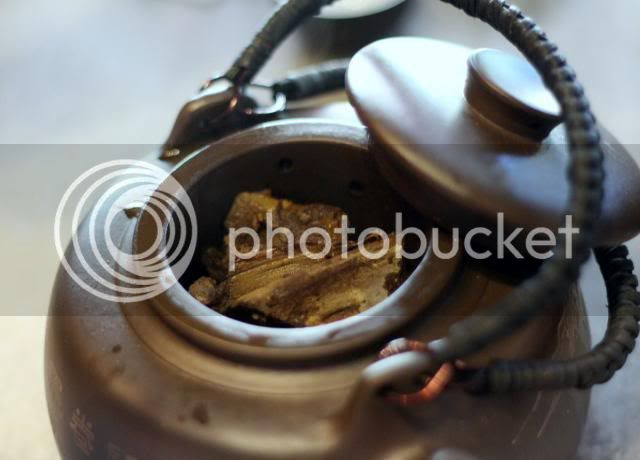 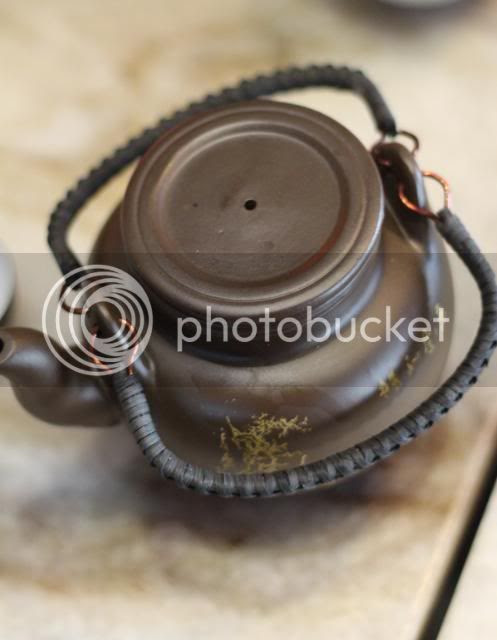 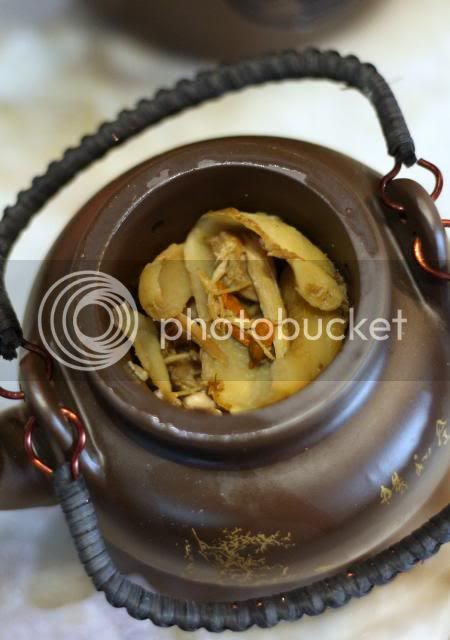 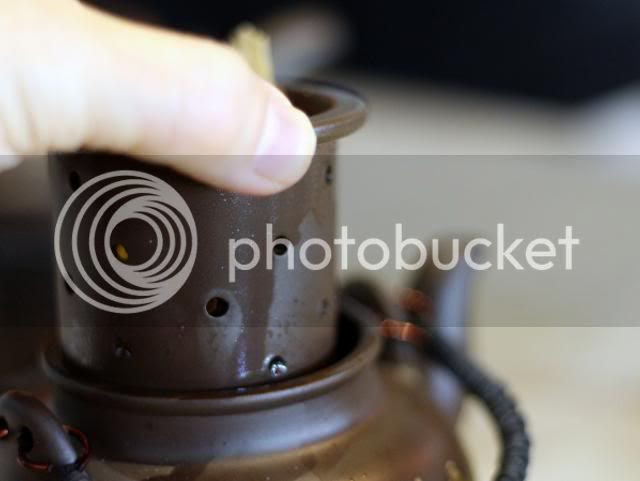 Unagi Puffs In BBQ sauce.  The pastry was nice and buttery, though it probably contained lard...lard gives a light airiness to chinese pastries that is difficult to replicate with shortening and margarine, which are bad for you anyway. 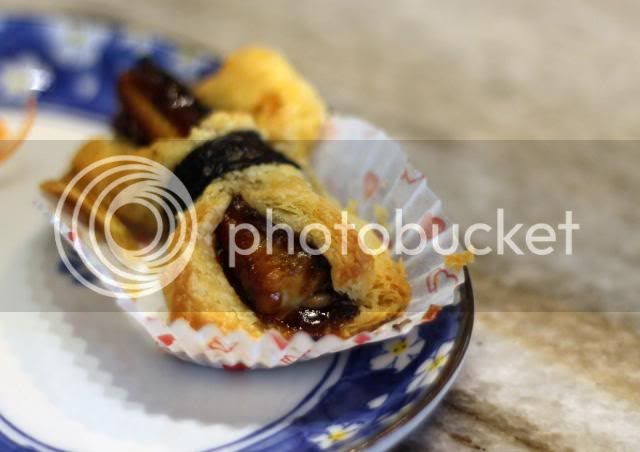 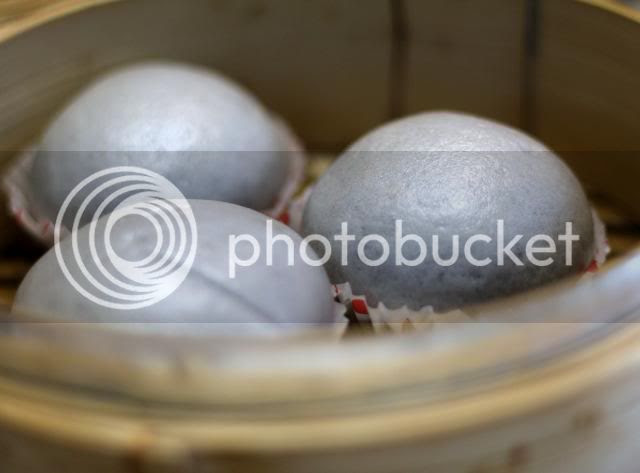 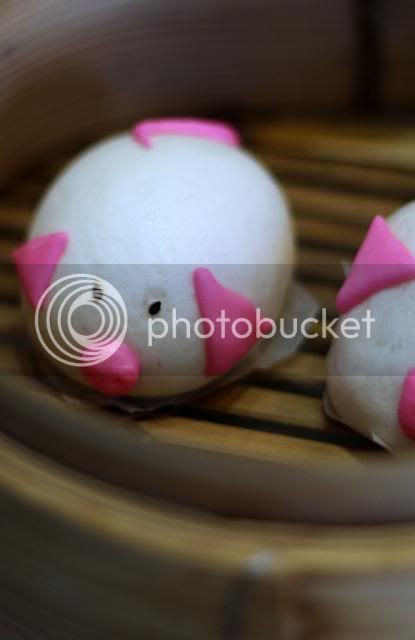 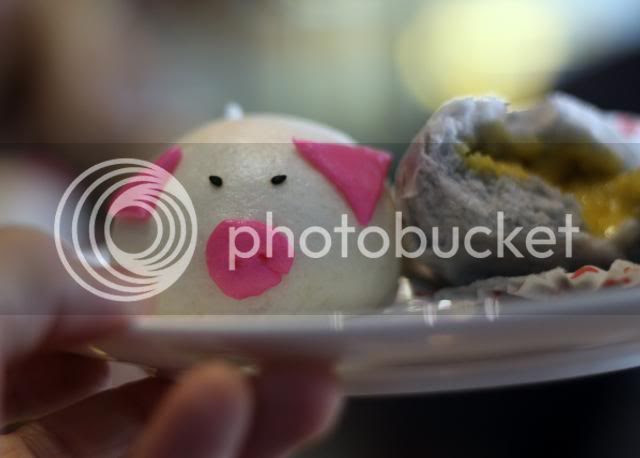 So how does cuteness rank against a rather pedestrian dull charcoal exterior?  Actually, as in all things, beauty lies within, and the filling of the charcoal bun was superb.  Melt in the mouth, rich, eggy and salt egg yolky custard, treating the palate to shades of saltiness and sweet all in that molten lava of wonderful yellow. 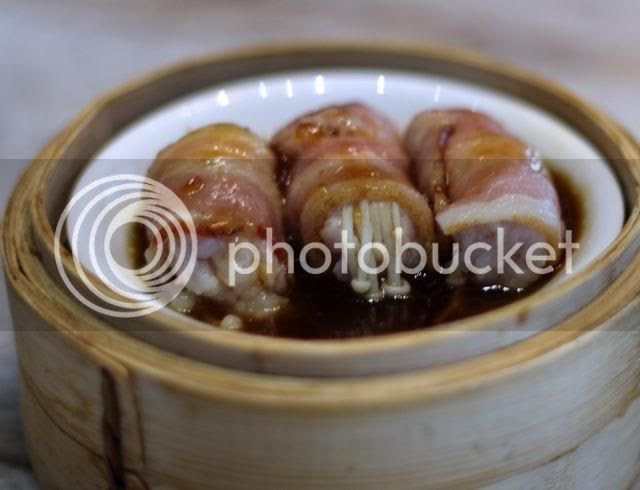 Nothing to warm the entrails of the heart more than bacon, the very sight of it makes me almost as high as pot, ...not that I have ever tried.  Enokis in Pig Skins...Usually we see enokis wrapped in cow, in Japanese restaurants.  Wrapping them mushrooms in pig is so much nicer, if you ask me. 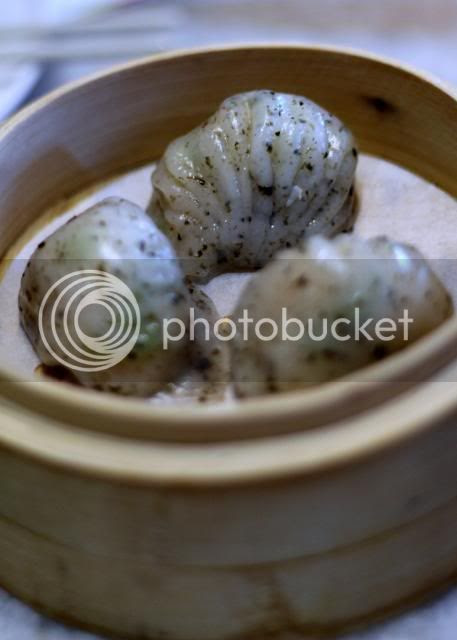 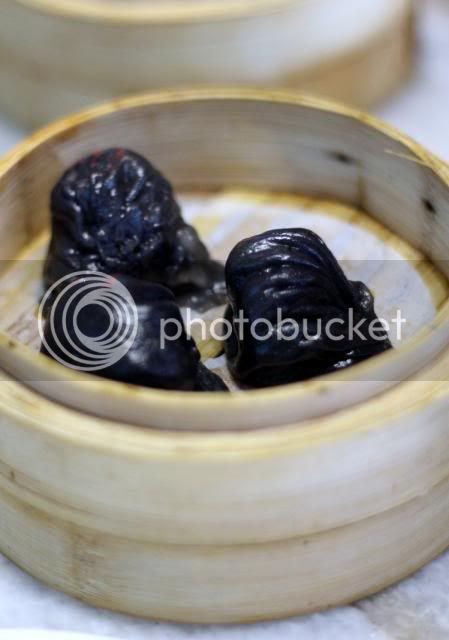 Bits of leftover Darth Vader's head.  Okay, charcoal skinned prawn dumpling.  What's with the charcoal craze?  I am not sure, maybe it's the detoxifying properties of charcoal, so that you can eat and still feel healthy. 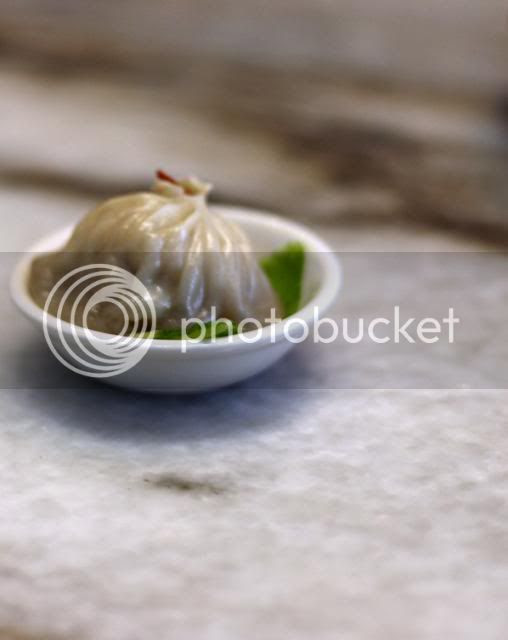 Bak Kut Teh Siu Long Baos...a rather novel idea.  The skin was adequately thin, and the burst of soup as you bite into it is most satisfying.  Like eating a HUGE fish egg...don't you love the squirt of brine when you bite into fish roe...yeah, it's something like that. 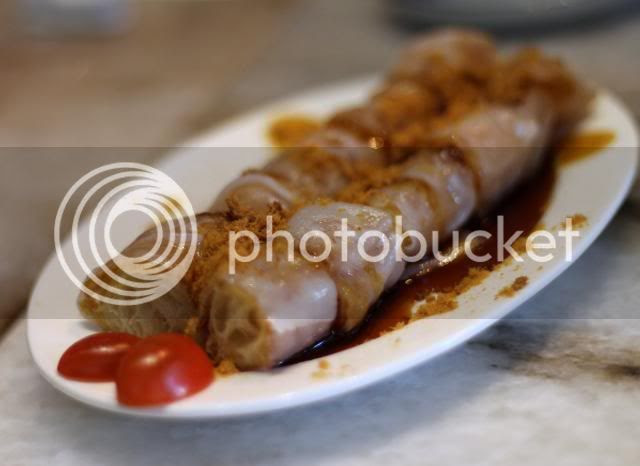 This cheong fun wrapped around a yoo tiao must be Hong Kongese, since I've only ever had it there.  I'm not sure I understand this marriage, but nevertheless the ricy almost glutinous cheong fun with the greasy yoo tiao (a friend described yoo tiaos as air trapped in grease), does make an interesting combo. 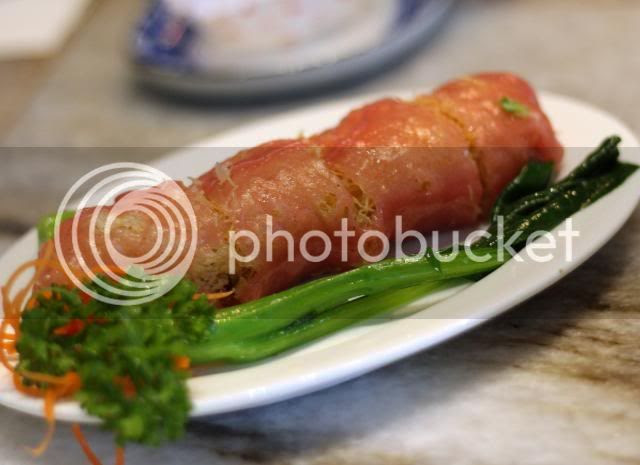 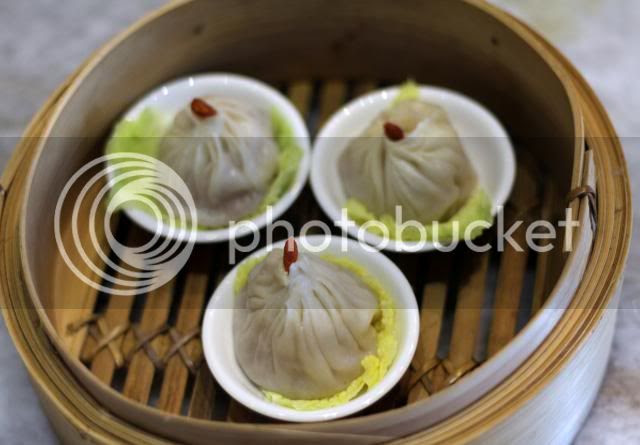 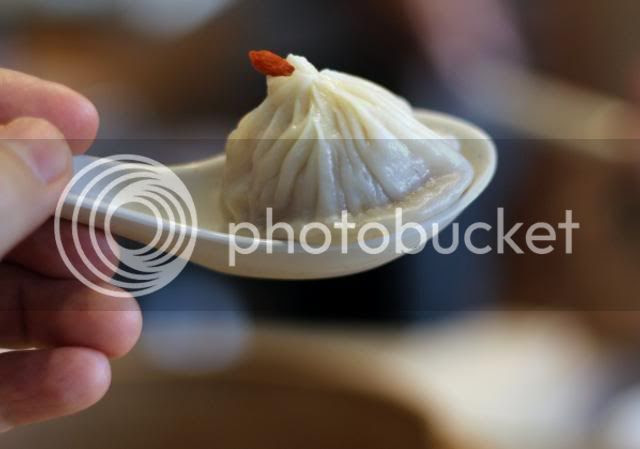 Actually Xiu Long Baos are rather photogenic food.  It's like the meringue of the dim sum world. 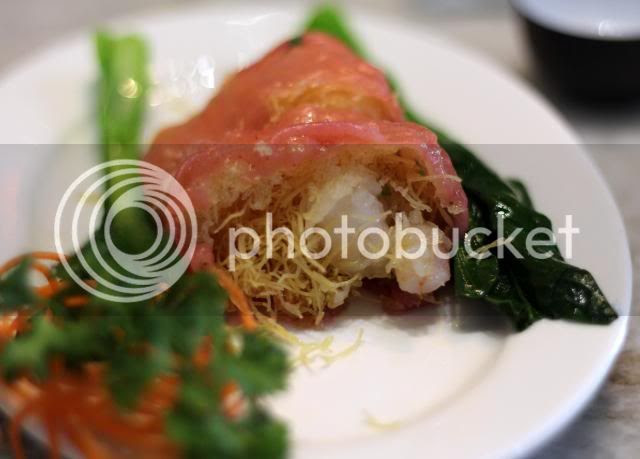 A cross section of the earlier mentioned prawns in organic red rice roll. 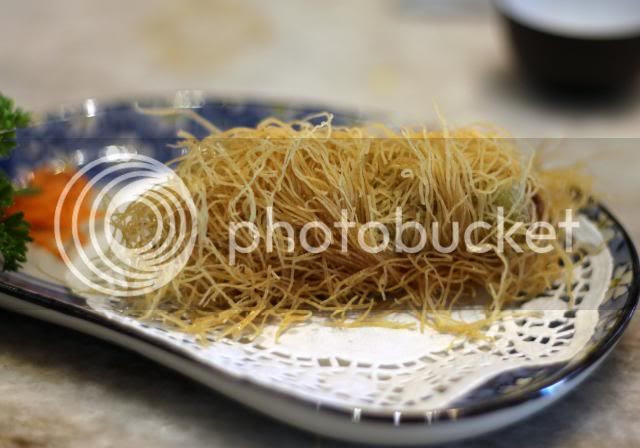 Deep fried dragon's beard... Which I think would have been a cooler name than deep fried avocado roll with crispy silk wrap.  It reminds me of that greek dessert, just not as sweet.  Can't really go wrong with avocado, unless it was a bad one to begin with. 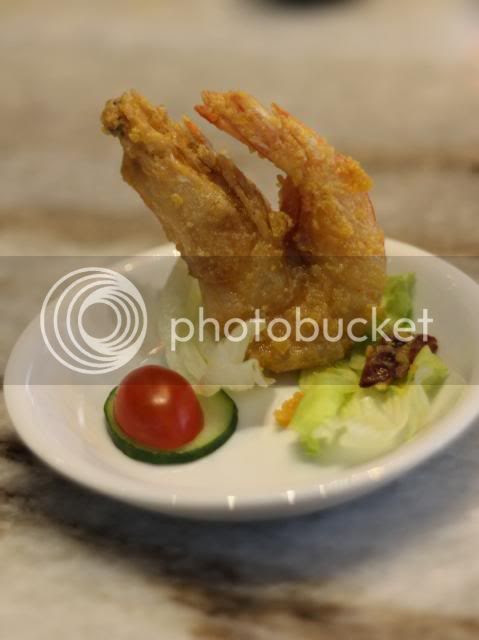 Salted Egg Prawn, which seems a bit incongruous to the surroundings, if you ask me.  It looks like it fell off a banquet menu more than a dim sum one. 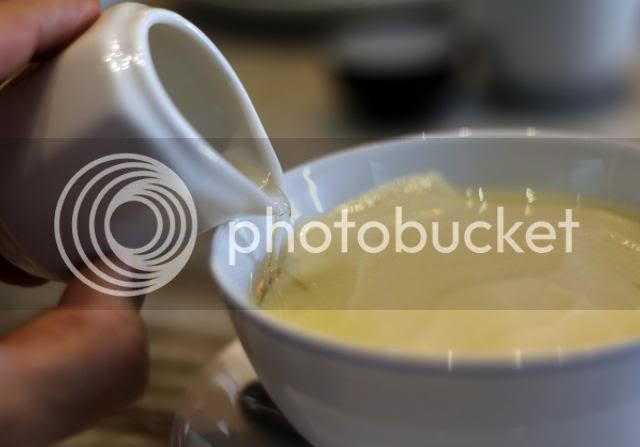 And to end it all,Tau Fu Fah, which was a rather large serving, which everyone got one of.  Oddly enough, all the chicks on the table, found a sour aftertaste to the bean curd, but none of the guys could detect that sour aftertaste.  Fascinating.  maybe it's estrogen related.

I am not sure if they charge corkage, but I am thinking of having a bubbly brunch here soon.  (if they have no or nominal corkage).

aiyoh.. the piggy so cute! So i guess u went potty over the dimsum lah. NOT FAIR!! You get all the good events!! :P