Sho Naganuma, One Night In Langkawi

If you own a BMW 7 series, or intend to, then you will have the privilege of being invited to ladida events at the Four Seasons Langkawi, and be feted by celebrity chefs like Sho Naganuma, who slaved over the stoves for a week to produce a different menu for a week for all the well heeled.  If you do NOT own a BMW or can't afford to, then you gotta be content to be invited for a preview of the AFC TV Show featuring Sho Naganuma.

Last Monday night, on 17th June, AFC premiered its newest addition to the One Night Series.  The members of the media & bloggers were invited to Serai, Life Centre for a preview of the show, as well as as for an opportunity to meet the Chef in real life.  He cuts a very dashing figure, almost like the likeable "bad guy" in a movie, with his macho and rugged exterior.  It was interesting to hear certain aspects of his life, like how his father found him impossible to manage, and finally exiled him to America, from Japan.  I wouldn't mind that kind of exile.

The show highlights how he is commissioned for this Herculean task, (although it's only 7 days, and not 12) and how his first step is to meet with his mentor and sifu, Hide Yamamoto, who highlights and questions where his source of ingredients would be from, and how he would preserve freshness etc .  In a nutshell, all the fresh sushi ingredients are flown in from Japan, ...afterall, if you can fly in BMW owners to Langkawi, I am sure flying in a few fish wouldn't be a problem.

Other aspects of the show, show Sho showing his anxiety caused by forces of nature, when a sudden thunderstorm forces the entire dinner to be moved indoors, causing havoc on the logistics of the entire operation.  At the end of the day, of course the final outcome is good.  It's nice to live vicariously and see the lifestyles of the rich and famous. 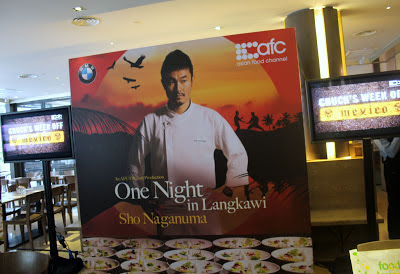 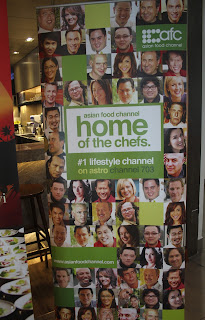 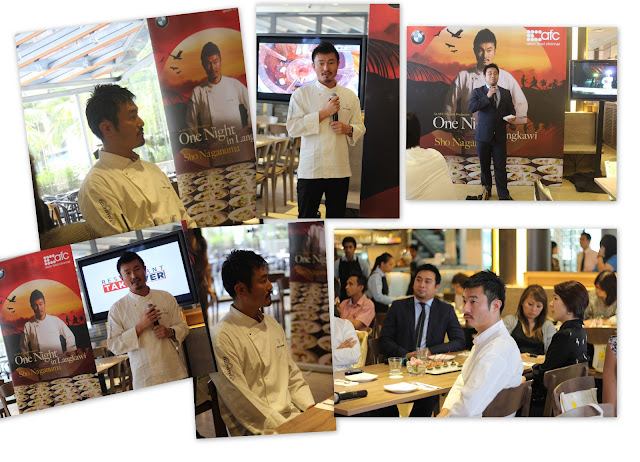 The BMW fellow, Mr Owen, gives his speech, and introduces Chef Sho.  He's actually quite a soft spoken gentleman, and doesn't look like the sort who would be screaming and going ballistic in the kitchen.  (As in Chef Sho). 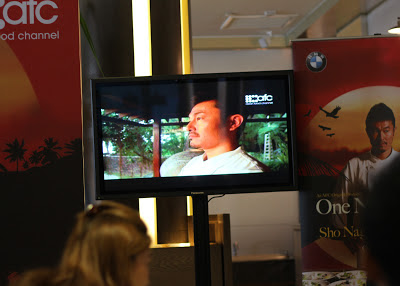 We get an insight into the pensive side of the Chef, ... well, he certainly seemed to have a good time in Langkawi, and managed to try the cable car, went into the mangroves, went swimming, skiing, jetskiing, and an amazing looking spa, which he describes as the best he had. 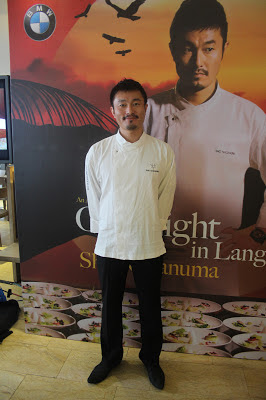 So tune in to AFC for more of ONE NIGHT IN LANGAWI - SHO NAGANUMA, Channel 703 Astro.  Although it has already premiered, there will be re-runs.

Posted by fatboybakes at 1:57 PM

another event i couldn't attend. What was it about you being in your twilight (or was that sunset) stages of blogging. what utter rubbish. :P