Some people love cars, some jewellery, some watches (which actually can cost more than cars or jewellery), some are into cameras, or fine wines.  What excites me?  Kitchen gadgets.  If I had the space, I'd stock my kitchen with every conceivable gadget.  If I had my dream house, it would comprise, Kitchen, with a hint of living room, (which will be sparsely furnished.  Afterall, I'd use a food processor more than say a hi-fi system or a masterpiece on the wall), toilets (large ones, to facilitate the product of a large kitchen)....and I guess, some bedrooms.  Though I like the smell and aroma of food wafting through a kitchen, I would not want to wake up smelling like bacon.

So, when I got an invitation (albeit possibly meant for another person, and I received it by mistake) to the Philips Smart Kitchen Cooking Workshop, which involved Philips Gadgetry, well, it's almost like a kid winning a trip to Disneyland. Okay, maybe not Disneyland, since that would involve flying.  Maybe Legoland.  And, on top of that, the workshop was to be helmed by a Celebrity Chef from Astro Awani.  My, can life get ANY better I ask you.

Anyway, instructions were rather vague, I was advised to bring another person, as there was to be some sort of competition, and to bring plates, for plating.  I guess they didnt mean hair plating.  As with all instructions, I follow them BADLY, and didn't really pay much attention, but vaguely remembered the plates, and in my haste on a frenetic Saturday morning, grabbed whatever plates that looked remotely presentable, and chucked them in a shopping bag, and clinked and clunked all the way to Menara Axis, WHERE the Philips Smart Kitchen is located.

I was glad to see familiar faces, Taufulo and Anna, and I asked friend to come along, from DerykwithaYdotblogspotdotcom.

We were introduced to the workshop, and given a booklet with more tasks than Hercules was given, ...up to that point, I felt, geez, they really should have told us before hand that there was going to be SO MUCH homework, but anyway, it was gadgets, so I made a mental note to perservere.

The equipment that would be our friends for the day were the Philips Pressure Cooker, (2 of them), The Philips Soya Bean Maker, and The Philips Airfryer.  The menu, Nasi Briyani Gam Johor, Kuzi Ayam, Kacang Hijau Dessert and Coconut Fudge Slice.  If Philips were a religion, I'd have converted by the end of the session.

Seriously? All that in 2 hours, I thought?  Briyani wor.  Doesnt that take like an eternity?  The host, Marina Mustapha, is a bubbly, gregarious teacher, that quickly puts you at ease at any misgivings you may have about delving into a full blown menu of briyani up to dessert. 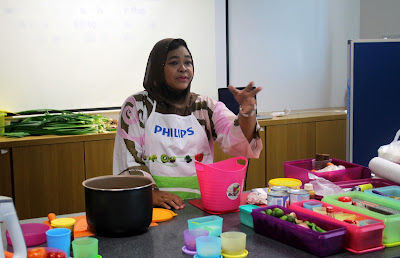 No wonder she is a TV chef, she has such a contagiously bubbly personality, she could turn curdled milk back into the udder.  And she made everything sound SOOOO easy.  Of course, it helped that everything on the recipe was pre measured and pre weighed. 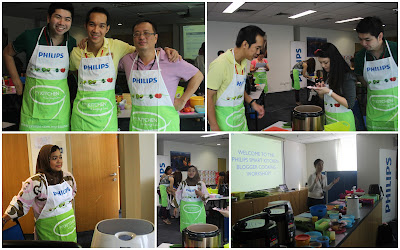 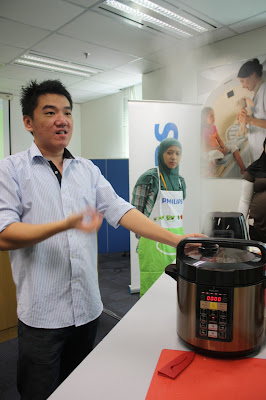 The Philips rep explaining about the PHILIPS PRESSURE COOKER. Incidentally, due to my raving recommendations, my Arch Nemesis, AWHIFFOFLEMONGRASS has already since purchased a Philips Pressure Cooker. 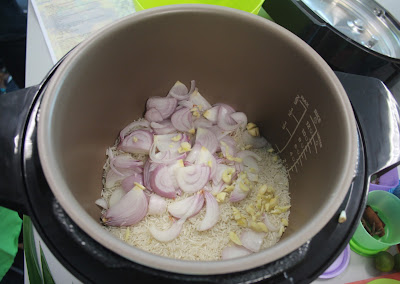 For the briyani, we literally chuck everything into the pressure cooker.  Oh, we did have to slice an onion and garlic, (of course, yours truly didnt read the instructions, and chopped the garlic instead of slice).  With the Philips Pressure Cooker, cooking rice has never been easier, and the trick, according to Puan Marina, is to use the equivalent quantity of liquid to uncooked rice. (beras).

A lot of stuff goes into briyani, such as tumeric, olive oil (this is the healthy version la, usually its GHEE), tairu (which Puan Marina taught us is just curdled evaporated milk, achieved by squeezing some calamansi into the milk), cinnamon, star anise, cloves, saffron (yup, the most expensive spice in the world is in this pot of goodness), pandan, coriander leaves, sultanas, cashews, crispy shallots.  Basically all the spices that made Malacca a great trading port in the 1400s.

Put the stuff in, close the pressure cooker lid, set the nozzel to PRESSURE, and press, "RICE".  Even my kid could do it.  Teet teet teet teet, it shows a time of 14 minutes.  FOURTEEN MINUTES to make briyani.  I can't even EAT it that fast, and my friends will tell you what a fast eater I am. 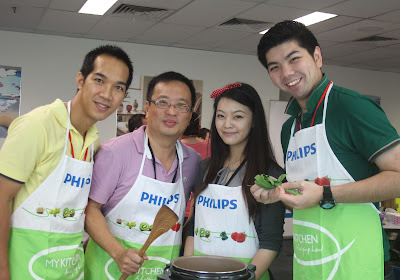 Our cooking team, comprising DerYk, Me, The lovely Anna, and the not so lovely other half, Taufulo. 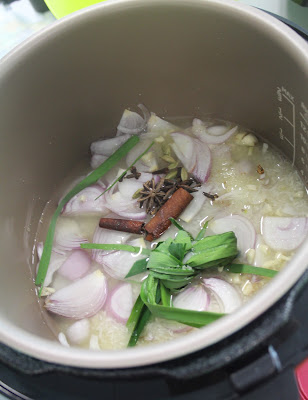 All the ingredients ready to be pressurized, and what do you do when you're fully pressurized? 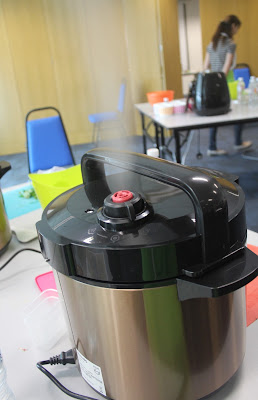 You let out steam, of course.  Now, be careful NOT to put your face in the way of the steam jet, unless you intend to have a facial treatment of sorts, but I believe you can scald yourself.  That whistling sound emanating from the release reminds me of the King and I's..I whistle a happy tune. 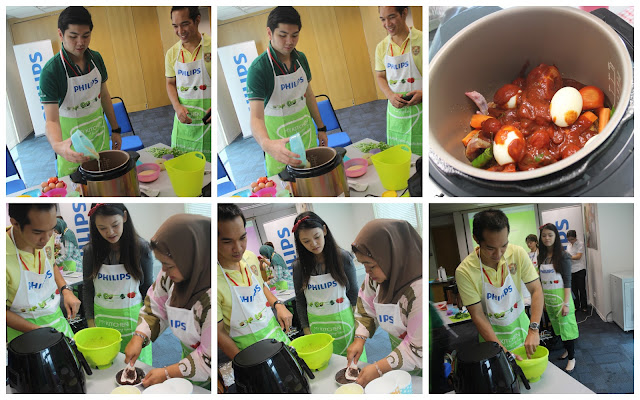 Meanwhile, while the rice was cooking, in the OTHER pressure cooker, we make Kuzi, which is JUST as quick. Taufulo is in charge of the Kuzi 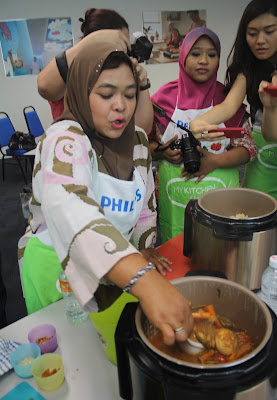 Marina checks the cooked Kuzi, and does some QC.  Of course, ours tasted wonderful.  (Enter basket lift oneself) 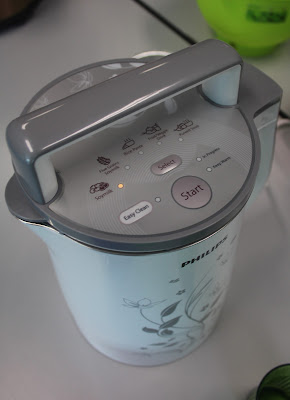 We do the SAME for our kacang hijau dessert, in fact it was done so fast, I almost missed it.
1½ cups green beans soaked for 4 hours (obviously Puan Marina was kind enough to soak our beans), ½ cup gula melaka, ¼ cup caster sugar, 1 cup water, 1/4 cup pandan juice, 1 slice ginger, 1 1/4 coconut milk.  Actually, best to half the qty of sugar, and add it as needed, cos I found the result WAYYYY too sweet.
Chuck everything into the PHILIPS SOYAMILK MAKER, and press the "FIVE GRAIN" mode, and press START.  After 25 minutes, green bean dessert is done.  Phwahhh.  I almost feel like setting up a tong shui store. 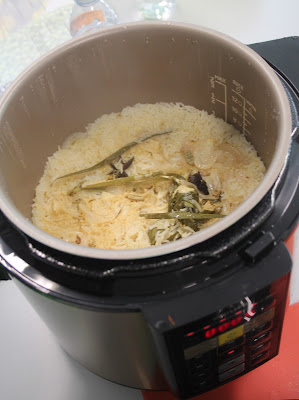 After 14 minutes, the rice is indeed cooked, but needs some embellishment. 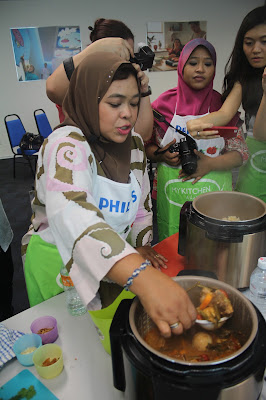 She chucks some pieces of meat into the briyani.  (now we know why there's chunks of meat in briyani gam) 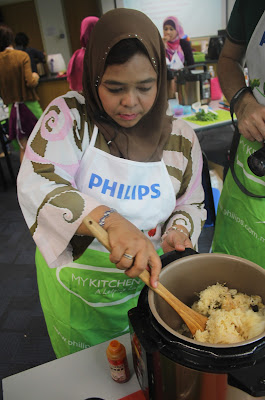 Marina moves around each work station, and squirts some coloring to beautify the rice. The lid is shut again and the rice is left on the WARM function. 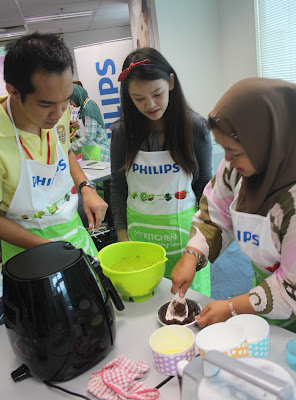 She demonstrates how to consolidate the Coconut slice which is to be "baked" in the Philips Airfryer.  Now, the PHILIPS AIRFRYER  sounds like a miracle machine (if the other two didn't already), because it achieves the same result as DEEP FRYING without the deep...no oil.  Or very little.  Crispy french fries, crispy chicken wings, nuggets, 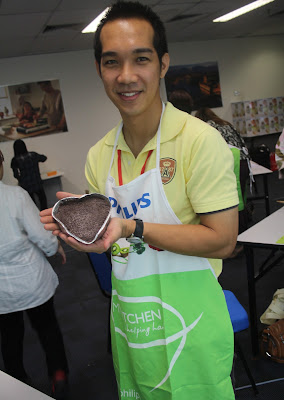 And in this case, crispy coconut slices shaped as a HEART.  Everyone go AWWWW....... 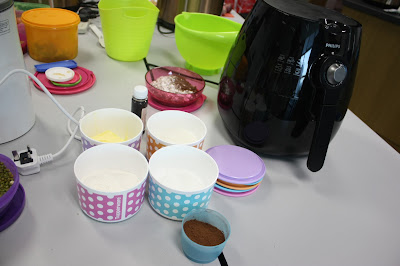 The PHILIPS AIRFRYER does come in some pastel colors as well....the black one is probably the showroom model.

And after slaving over all the gadgetry for around 45 minutes, an entire MEAL is ready. 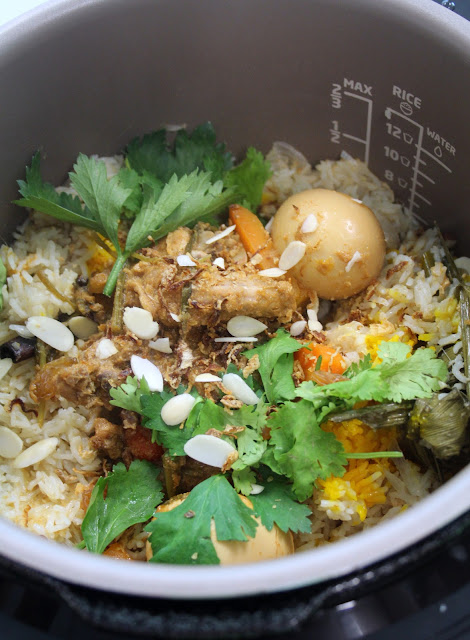 LOOK at that GORGEOUS Beriani Gam Johor....It will give Batu Pahat a run for their money. 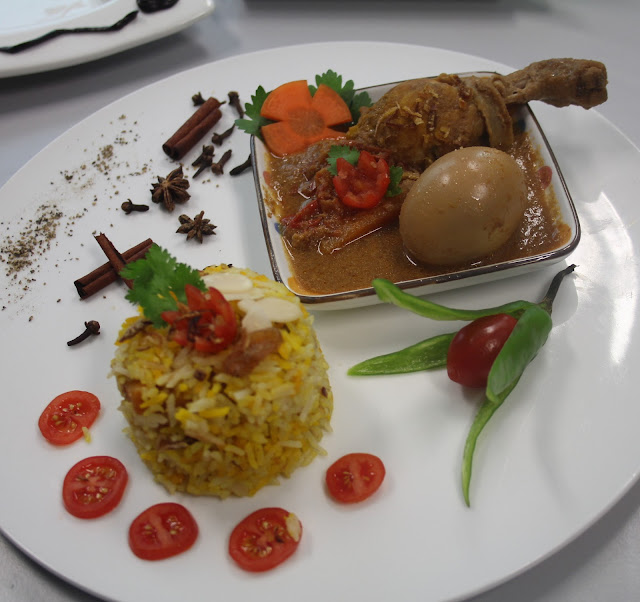 As plating, and all things pretty, are as foreign to me as Greek is to a Hainanese, I left that part to the more artistically inclined, but since we didn't win, I guess they weren't much good either.  And no one brought plates. 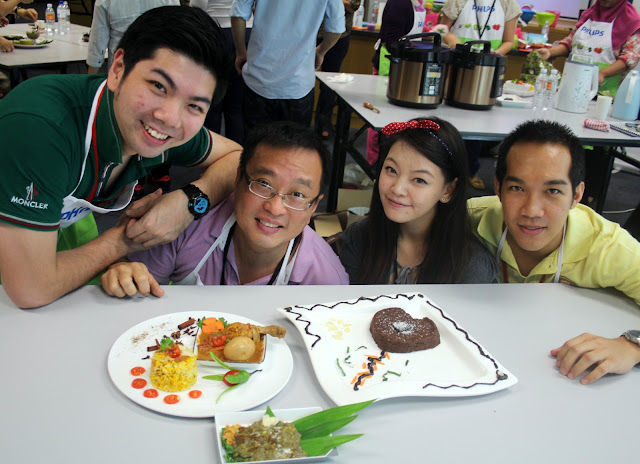 Clockwise, (the food, not the people), the Beriani Gam Johor with a side serving of Kuzi Ayam, A Heart Shaped Coconut Slice with a hint of chocolate frosting, made with lurve, of course, and Kacang Hijau Dessert, with Gula Melaka Shavings on a bed of Screwpine Leaves, aka Pandanus.  I feel like opening a restaurant now. 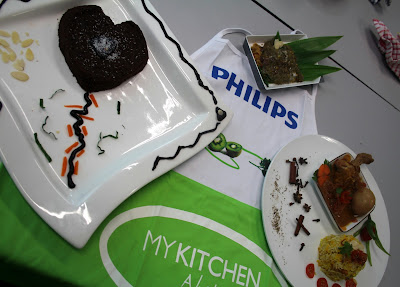 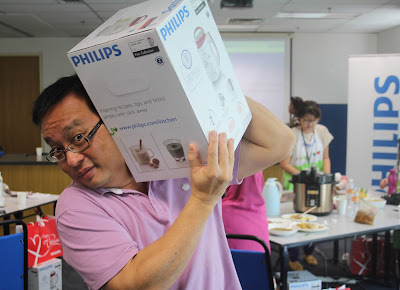 And, just like Hercules who had to carry the weight of the world on his shoulder, so too, with the Herculean tasks assigned to us, we (the invited blogger, not the plus 1) walks away with a PHILIPS SOY MILK MAKER, which I have used twice already.

Meanwhile, specially for Babe In the City KL, who asked, here's the Beriani Recipe.  I think we are supposed to share... 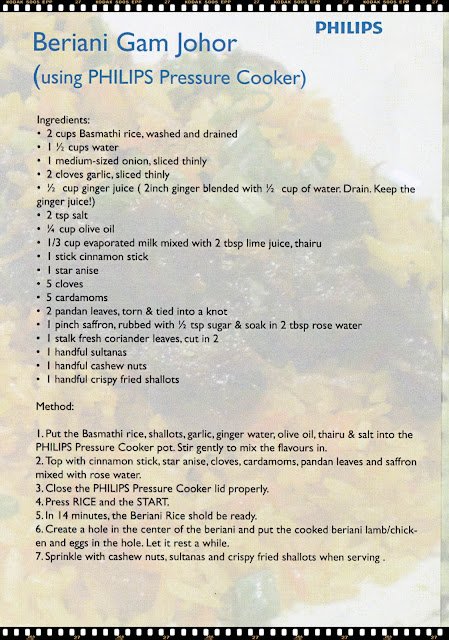 Watch out for the next instalment.
LIKE THE PHILIPS HOME LIVING FACEBOOK PAGE
Posted by fatboybakes at 9:27 PM

Very nice, thanks for sharing.

Thank you, thank you!!! Looks like I have options to use either my normal rice cooker, stovetop pressure cooker or the electric one that my mom has :p

Wah looks easy peasy. On your recommendation, I just bought the Philips Pressure Cooker. Cooked tau yu bak yesterday in the PC...so easy lah. I just chucked all the ingredients inside, pressed a button, and played my guitar while waiting for dinner to be cooked. Wish there was a saute function, though. Or is there? Hmmmmm. (waiting in anticipation for a reply)

tau yu bak? you want to end up in jail ah, thamby. i am surprised your guitar playing didnt cause a nationwide blackout. why do you need a salute function?

babekl, arent you lucky, so many appliances...try and let me know how it worked.

sewa mobil, thanks for dropping by

I dunno why but you keep saying "salute function".
And, sir, you only end up in jail if you say BKT la, not TYB. Chis.

There’s JUST ONE REASON you might fail on the Paleo Diet and it has everything to do with your ability to make delicious food, FAST.

But now, with this stunningly simple cookbook I’ll show you how to cook savory, mouth-watering meals in minutes for some of the busiest Paleo eaters in the world...