I'm not sure how many people who read this blog remember the good old days of James Clavell's Orientally skewed novels, like Shogun, Tai Pan, Gai Jin and of course, Noble House.  I don't know if it is by occident that the Oriental group has also named their restaurant Noble House and now, Noble Mansion.  There must be something noble about the word "Noble".

It was a few weeks ago, when we were at neighbouring Japanese restaurant at Jaya 33 annex, that Pure Glutton pointed to Noble Mansion next door, and asked, interested to come and try this place out?  Hey, it's the Oriental group, and quite honestly, in as far as Chinese restaurant "chains" go, the Oriental group's outlets which have mushroomed faster than zits on a pubescent teen, are one of my favourites.  My family are regulars at the Ming Room in BSC, and have had many occasions in Han Room.  My brother in law had his nuptials in Noble House, in Jalan Delima, ..so we are no stranger to the offerings.  But the great thing is, unlike other "chains", each one is unique, much like children, whilst sharing perhaps a common DNA, exhibit different traits and form their own distinct personalities.

Noble Mansion is the spanking new baby, in Jaya 33 Annexe, and boasts Shunde cuisine.  It's a region in Guangdong, and I guess due to it's proximity to Canton, (Guangzhou), inevitably there are some similarities.

We start with a range of oriental like tapas. 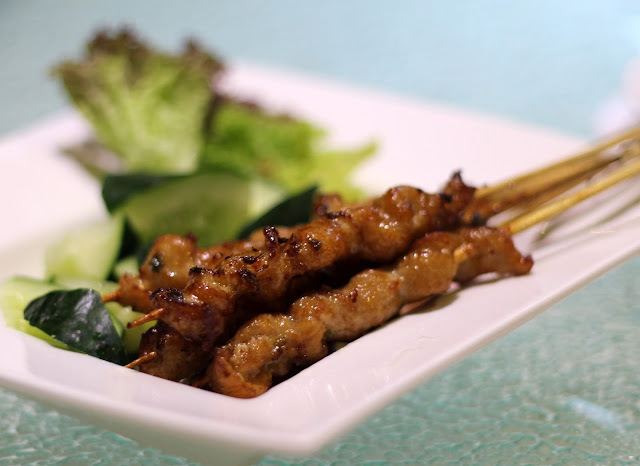 BBQ pork meat in a skewer.  Yes, the resemblance to a local dish of ours hailing from Kajang is startling.  But one bite into that luscious porcine paradise and you'll say, like Dorothy, "I don't think we're in Kajang anymore".  RM12 per portion 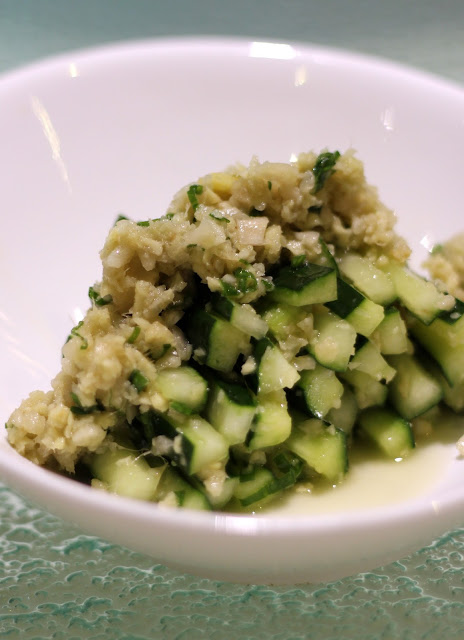 Although the menu said Zuchinni with Minced Ginger, it was actually Japanese Cucumber.  A very refreshing dish, and quite healthy too I'd say, apart from the oil dribbled liberally.  RM8 per portion 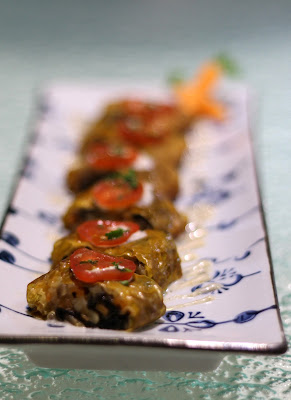 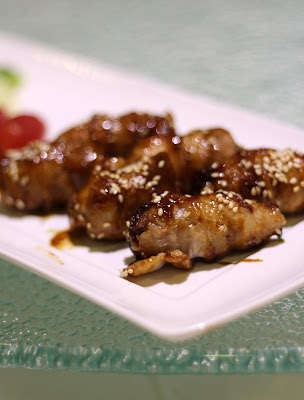 Liver sausage char siu roll.  Oooh, happiness in a roll.  Or is it on a roll.  RM16 per pax of melt in the mouth goodness, with shivers of pleasure tingling down the spine at the porkiness of it all. 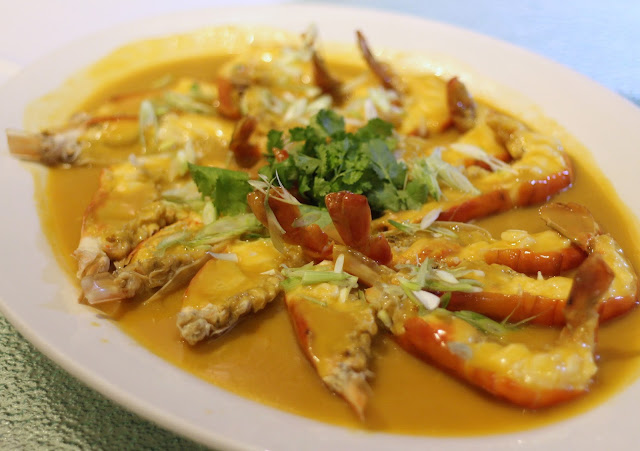 Blogging at lunchtime is a very bad idea.  Just looking at these babies makes me want to cry.  Steamed Fresh Water Prawn, I'd be happy just to slurp up that sublime stock and roe-y goodness.  RM28 per pax (that's for half a prawn). 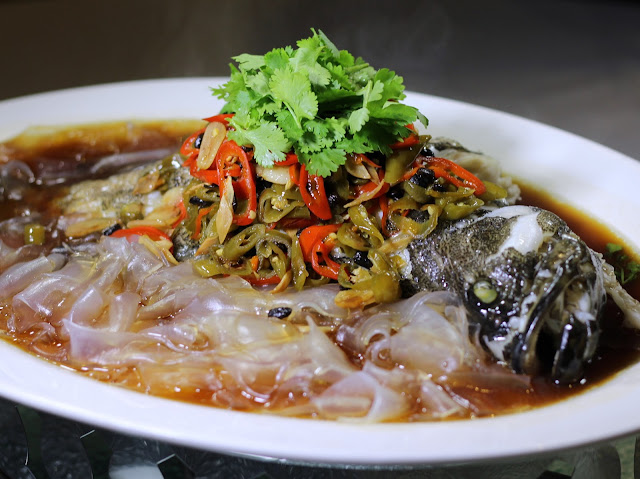 This is unique, Steamed Ocean Garoupa Shunde Style, at RM330 each, served with a silky rice noodle that virtually glides down your throat unguided. The flavours are very unique, tangy, salty, sweet, covering a wide spectrum that will loosen any tongue. 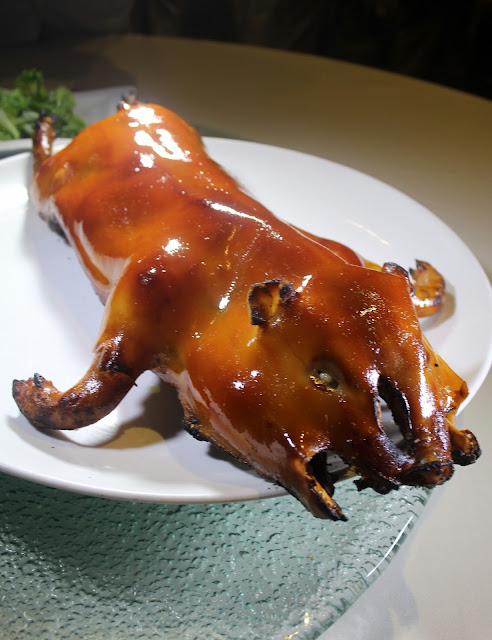 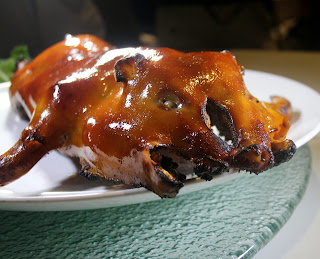 A bonus pig, since everyone on the table expressed such undivided enthusiasm at the mention of suckling pig.  Look at that fabulously glazed skin, one of their closely guarded trade secrets.  The Chef and part owner, who graced us with his company, told us that there must always be some trade secrets passed down from generation to generation.  eg, in the Lee Kum Kee family, only the Lee boys are privvy to the secrets of the oyster sauce making.  The suckling pig was extraordinary, the skin so crisp and flavourful.  RM330 per pig. 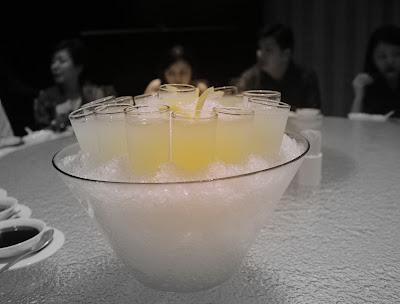 Very classy, got palate cleanser mid way through the meal.  A refreshing drink of lemon and carambola juice.  The chinese sorbet, so to speak. 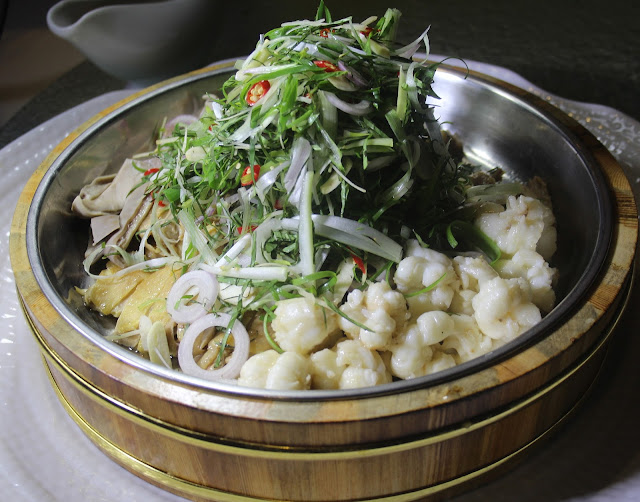 Now, this is a rather strange dish.  Lobster with Chicken & Pig Stomach in Spicy Sauce.  Why strange?  Well, because it's one of those dishes, where each of the parts in a star on its own.  The yellow skinned free range chicken, so wholesome and succulent, the lovely lobsters, which I could eat a whole plate of, the pigs sotmach which is my favourite...get what I mean?  There was no real benefit I felt in putting all three together...maybe it's like a concert with the three heavenly kings or something.  But I felt the sum of the parts was definitely greater than the whole.  RM80 per portion. 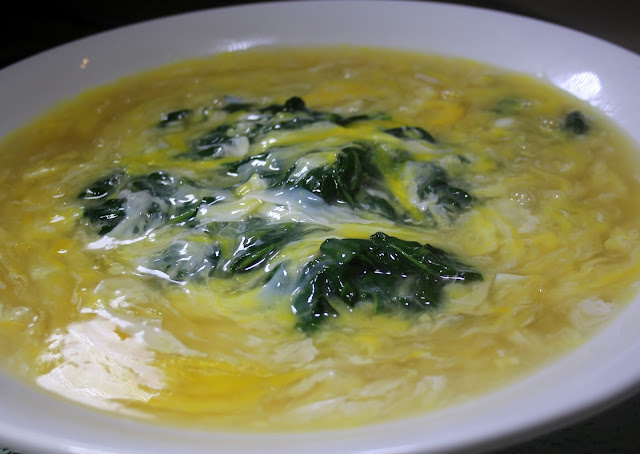 The next dish cleared some myths.  Wolfberry shoots, like wolfberries, I've been told, (Gei Ji or goji berry) are good for eyesight.  So, naturally one assumes that wolfberries come from the plant of the wolfberry shoots.  But no, apparently they are not related.  How can that be?  RM28 per portion.  Braised wolfberry shoots with eggs. 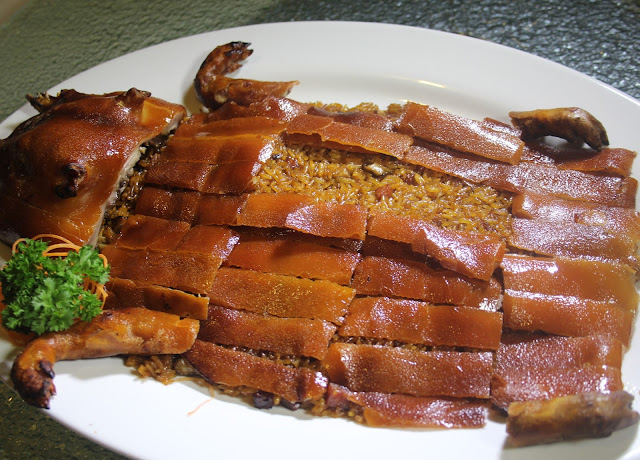 Roasted Suckling Pig with Glutinous Rice RM330.  Piggie number two has skin that is more common, but the surprise lies underneath, layers of glutinous rice.  Problem eating this dish towards the end is, one is too full to eat the rice, such a waste. 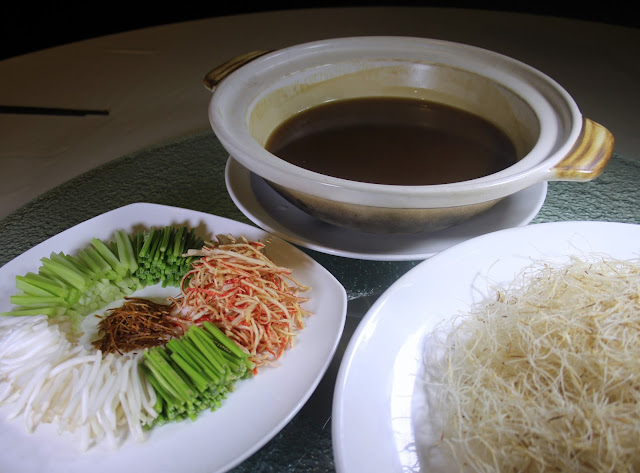 Rice Noodle With Abalone Sauce RM28 per portion.  This is something new, totally foreign to me.  The mee hoon is fried to a crisp, and then soaked in the hot sauce, which is bursting with flavour. 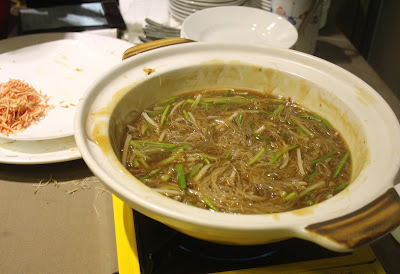 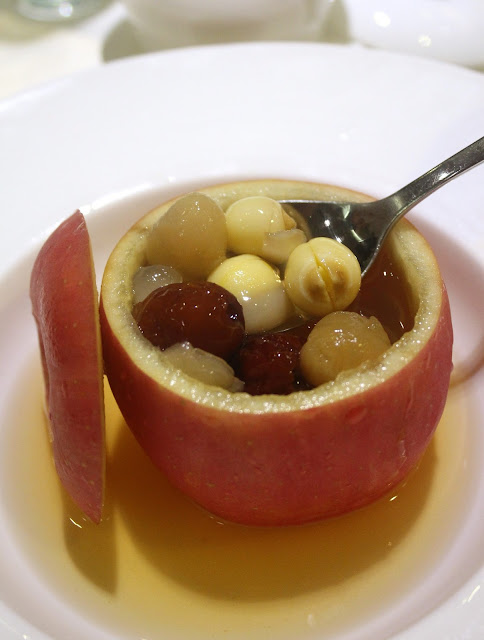 Chilled sweetened fuji apple with snow jelly, gingko, fresh lily and red dates. RM13/pax.  More often than not, Chinese desserts aren't decadent, and are really designed to cleanse the meal, rather than whack you with one final heavy blow.  I really liked this, and even finished the apple. 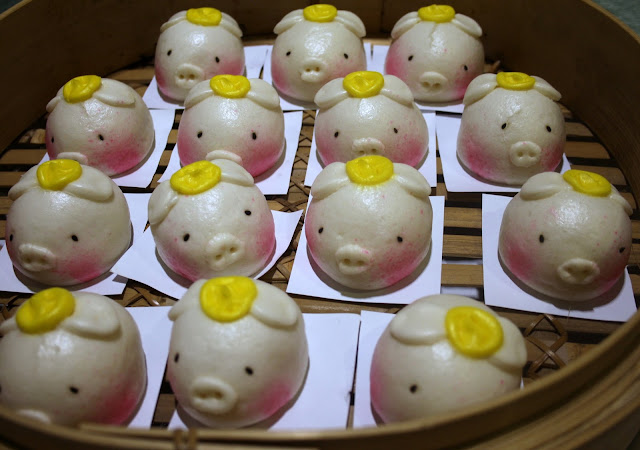 Longevity Piglet Bun RM28 for four.  Filled with a lovely salt egg custard, these cute lil babies...well, you would only order them for birthdays I guess.

That was a most scrumptious fulfilling meal.  Thanks to Pure Glutton for the invite.

suckling pig + glutinous rice? can i have this every day?