Anyway, coincidentally, after visiting Baba Low, the very next day, there was a review here in the Star, of the neighbouring Thai place, along that very row. I vaguely recall reading about it in someone's food blog, and have been meaning to sample the place. I made plans to bring young FOTY 07 and wife there for lunch, when all of a sudden, I get an sms from another friend reminding me of an appointment I made last week. I guess in situations like that, it is only polite to honor the earlier appointment, so I did. And I knew that the first question was gonna be, when they picked me up, "Where are we eating?". Usually, when it comes to Bangsar, I'll ho and hum and launch into the usual "what do YOU feel like eating" routine. So I was pleased as punch to for once, have a firm answer. (although it felt a bit like adultery, dumping the former couple to lunch with this other couple, at the very same place we were supposed to have gone).

The staff were all very helpful and friendly, in recommending what to eat. With the hainanese blood running through my veins, I gravitate to chicken rice the way women gravitate to diamonds. Nothing like succulent yellow pak cham kai to arouse me. 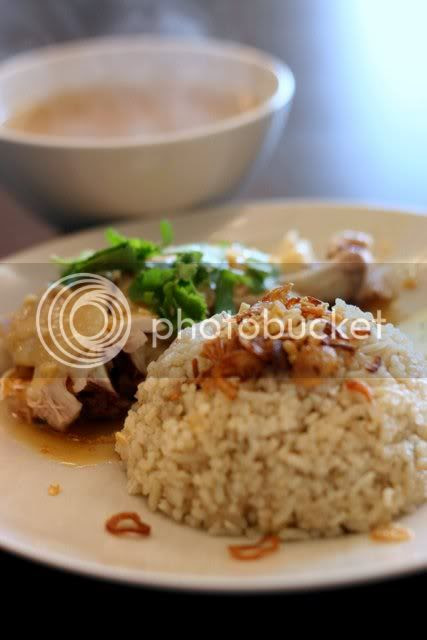 And I am startled to see my pic looks rather similar to the one taken by the Star photographer, which clearly goes to show a lack of imagination. The serendipitious accidents in the Baba Low post that made Hairy comment it looked artistic, were sadly absent in these series. No stray lime pips or spat out watermelon seeds. 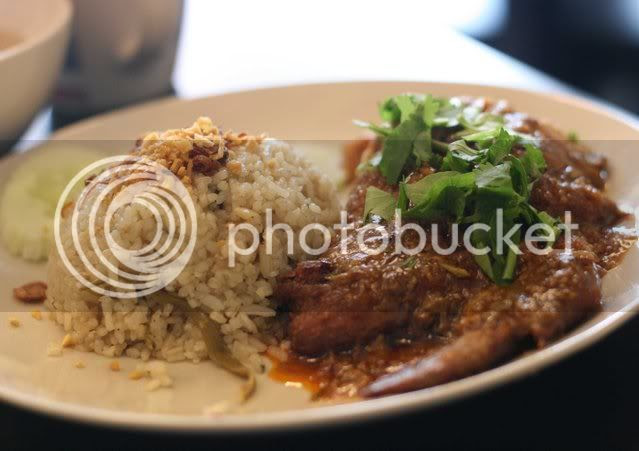 Mrs Tan Sri had the curry chicken rice, which she said was too salty. However, I like the yau fan. Tasty without being overly the top oily. The accompanying soup is also nice, but I wish it was hotter. 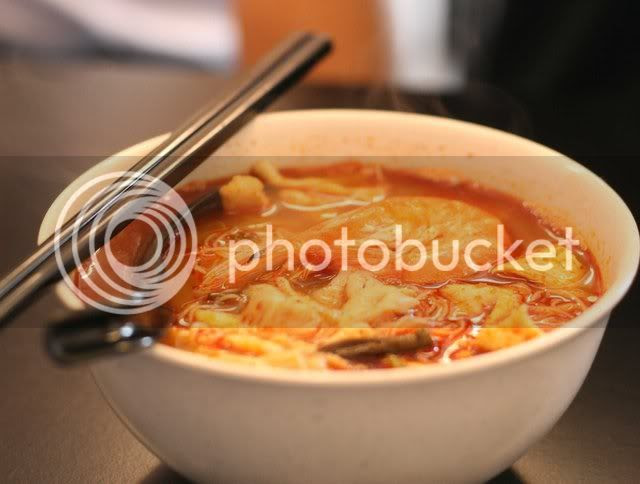 Mr Tan Sri had a bowl of Tom Yam noodles. Does anyone remember that lame joke that went,
"oh, did you hear that Tom Jones went to Thailand and became a buddhist, and even changed his name"....
"Oh really, to what"
"Tom Yam"
This was followed by a whole slew of name jokes, such as what do you call the most powerful Singh? Barry Manilow, coz He writes the songs that make the whole world singh...
and Who is the Singh who can't sing? Ans: DJ Dave.
There was also the one about Anita Sarawak suing her mother, Siput Sarawak, coz she was gonna change her name to Siput Babi.

We were all so simple minded then....the things that made us laugh...

Well, yeah, moving on. Without even remembering what was in the Star Review, we ordered the fish cakes. Interesting, it had bits of long bean in it. Tasty, but the fish texture wasn't bouncy enough, I felt. 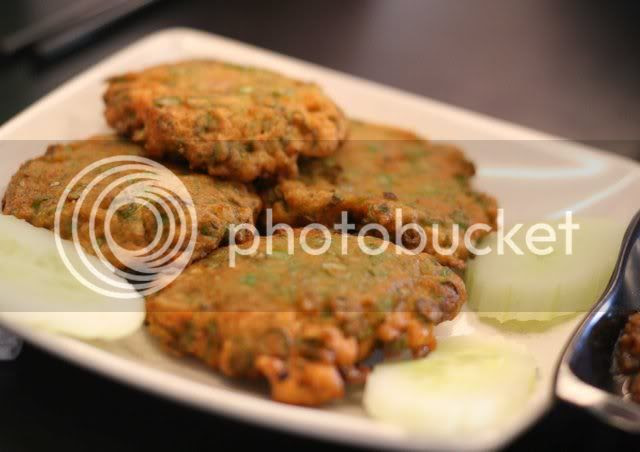 Kerabu paku, always a favourite of mine. I guess pucku pakus appeal to the primal man within. There is something gloriously rewarding about eating something that is perceived to grow in the wild, harvested by exotic indigenious tribes, as they use their sumpitans (blow pipes) to kill the marauding hordes of wild boar. In all probability, pucuk paku in grown in the owner's balcony or something. 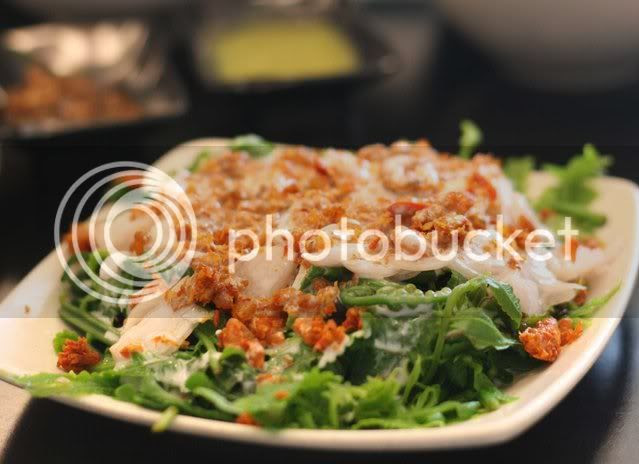 The dish was nice. The white sauce is actually coconut milk. The condiments sprinkled above lend some flavour to an otherwise bland salad. Which frankly, I don't mind. I love the raw, almost slimy taste that the wild fern emanates.

For the three of us, the bill came up to about 30 ++. Reasonable, for this part of the world. Definitely a place I'd revisit, but not before trying out the other two places along the same row that look interesting.

We adjourned to Baba Low for dessert, and had their chendol there.
Posted by fatboybakes at 10:30 AM

The sticky rice with custard is damn good here. The custard is more like creamy homemade kaya.

i think you are referring to LL's post sometime back. hehe...

aiyoh, those jokes are really timeless lar. simple or not, we do need to laugh once in awhile lar. especially at times when even the once funny word "fannie" bears such seriousness now..well, to the financial world lar, at least. hehe

barry manilow's i write a song is one my karaoke fave! especially the part, "..make the young girls cry"..haha!

the dishes looks good! you know ahhh .. your baba post ah, made me dream of that place leh. although i have no idea where it is .. somehow in my dream, i stumble upon it in brickfrields lol

WOW, lianne, this is the crowning glory of my blogging career, successfully making a reader DREAM about it!!! i hope it was dry...
its not in brickfields, but close enuff.

hairy, i'm surprised you know Barry. I was playing taboo with some youth from church during a camp, and they were older than you, (this was 10 years ago), the word was copacabana, so obviously i said barry manilow...one of them said, who's barry kenilo???

For some reason I read your first line as "That's a LOT of ASS in a name."

hahaha..well bz man bz man..so is there any more places along that street? almost a food crawl already

I am particular about Thai fish cakes too...they must have a really fishy and bouncy texture as well:)

Eh come..we do lunch there one day? We try the sticky rice with custard. Are the owners Thai?

unka, come. but you in town wor. has to be a saturday la.

christy, yeah, for that matter, any fish cake la hor. even in yong tau foo, i like em bouncy...

nipples, yup, still got two establishments i wanna try. one is a noodle stall, that looks quite good. must be quite good la, to survive as a solo noodle stand. (like those stands in hawker centre), occupying one shoplot wor.

the other place is air cond...cant remember what its called.

LFB, well, i guess its a plausible mistake... heh heh

wah. certainly the dishes look good. Is it the photography skills or the presentation? hmm.

and that Tom Yam joke is lame! Funny but lame.

everytime i read your comment ah .. sure x-rated one, howwww come???!!! hahaha

I'll have ya know, as a kiddo, I used to pick paku-pakis tops for my mum or eldest sis from next to a stream in Taiping near Aun Say garden. And then rush home to pull off the leeches that might be snuggling between my toes or climbing up a leg. Kerabu paku is so very sedap with shallots, pounded chilli and lime juice, etc. And, yes, you're right - slimy!

ARGUS, so there is HOPE after all that my paku pakis ARE wild, and harvested with such adventure. its nice isn't it, to think of the history behind the stuff that you eat, not just some generic nameless chicken from a battery, or a non descript vegetable in a gmo farm, harvested by impersonal machines. sigh, those were the days.

daph, blushing a darker shade of scarlet...did you say the photography? noooo la, cant be.