To quote the words of owner, Donald Lim, "hardly anyone ever turns down an offer for a review at Kampachi".  I couldn't agree with him more.  So much so, when Alice of Jom Makan asked if I could make it, and I couldn't, on the first given date, I mentally had an image of loud sobs and thumping of chest, (me, not Alice), at this lost opportunity.  Sometimes, the cosmos is kind, and as it turned out, most of the others couldn't make it either, so the date was rescheduled, and I mentally did cartwheels.  If I physically did them, I'd end up in traction, and no amount of sake would be able to dull the pain. 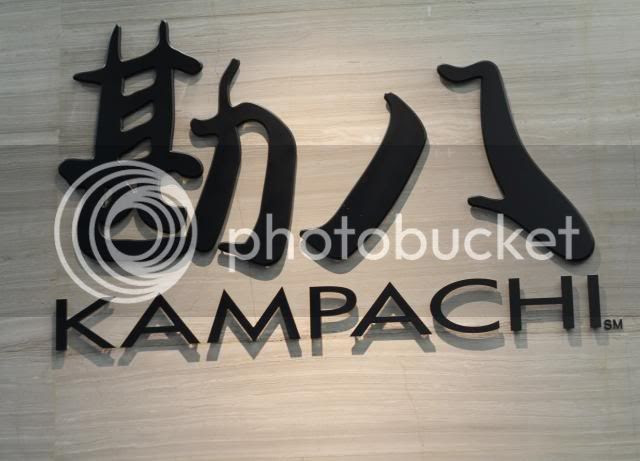 Located in the spanking new annex of Jaya 33, if previous Kampachis targetted the more matured and established crowd, this swanky outlet definitely targets the younger crowd, ...like me, of course, with a very trendy looking bar, and little individual cocoons for privacy. 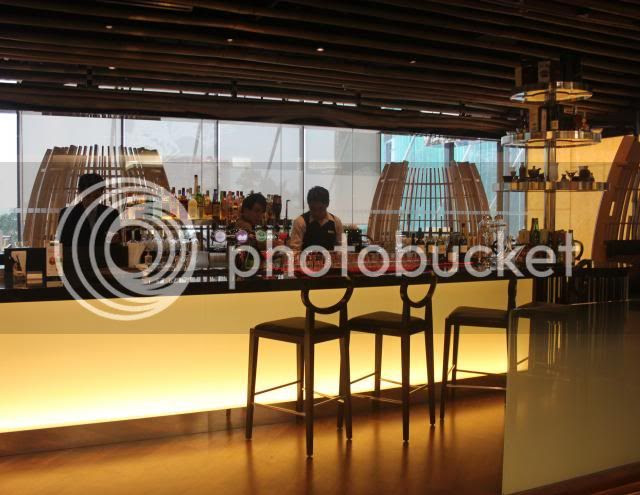 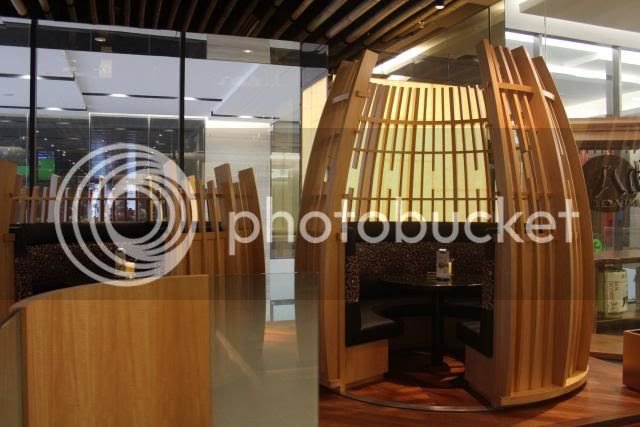 These little private saloons can actually rotate, not unlike the teacup ride in Disneyland, except it would not be advisable to treat it LIKE a teacup ride, especially during happy hour. 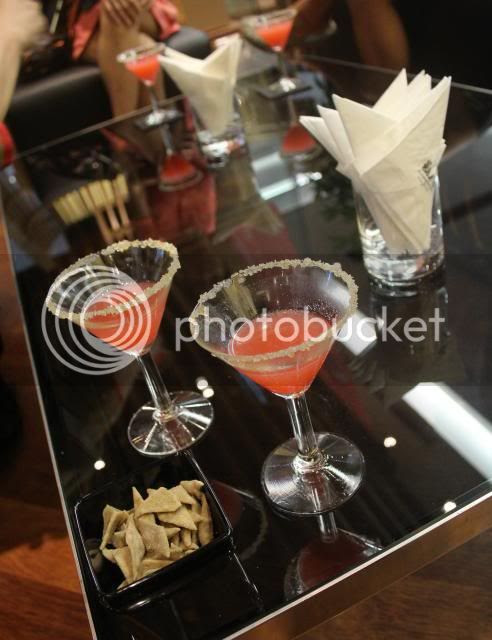 Speaking of happy hour, it was indeed that, with lots of alcohol for the night.  To start, we were given this rather femininely coloured cocktails, called the Blushing Maiko (Trainee Geisha) that were deceptively potent (just like a geisha I guess), and to munch, some soba chips, which were so good, I actually carried around that little dish and finished it all.  And whatever other cocktails that were not finished.  Like a hoover vacuum cleaner. 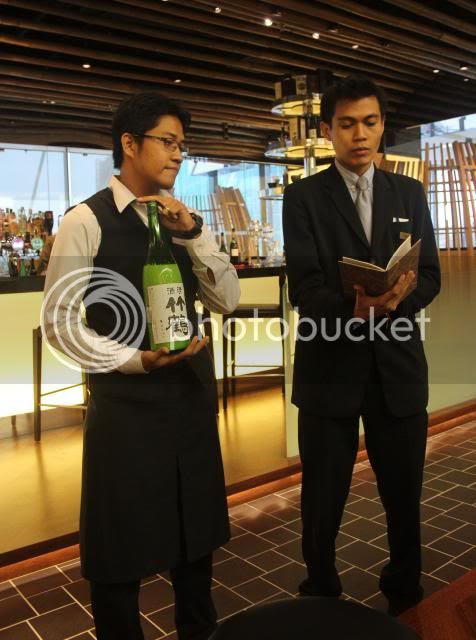 They have a wide  array of alcohol, and stocks one of the largest varieties specialty Sake, as is evidenced by the Sake Ball (pic below), but before that, they explain to us one of the unique Cloudy (not Cloudy Bay) Sake.  Different from the usual clear stuff we're accustomed to, the Cloudy sake looks like skimmed milk, and is actually one process short of distillation from the usual sake. 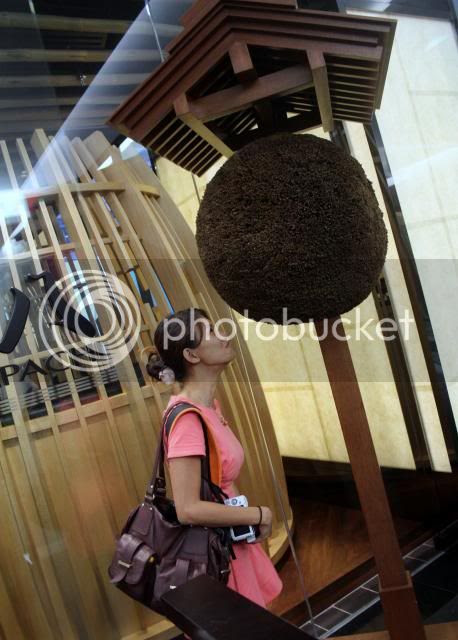 The large Sugidama or Sake Ball takes pride of place at the entrance of Kampachi.  It's made out of cedar twigs, and is traditionally hung over the door of Sake Breweries to signal the arrival of sake.  A curious onlooker inelegantly sniffs the ball. 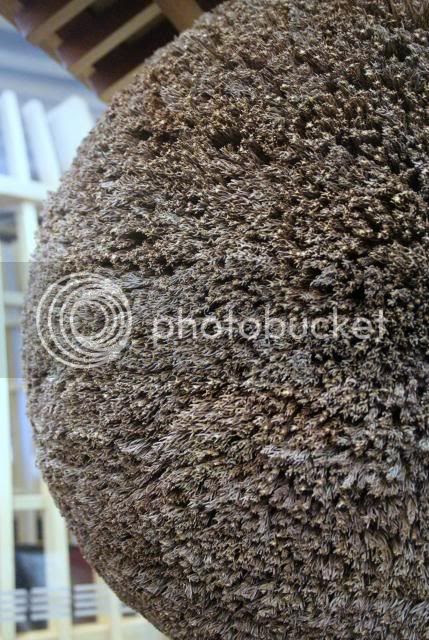 A closer look shows the twigginess of the cedars.  From a distance, even the world seems blue, so you can't really tell what it is.  In fact, from a distance, it looks like a big soft toy. 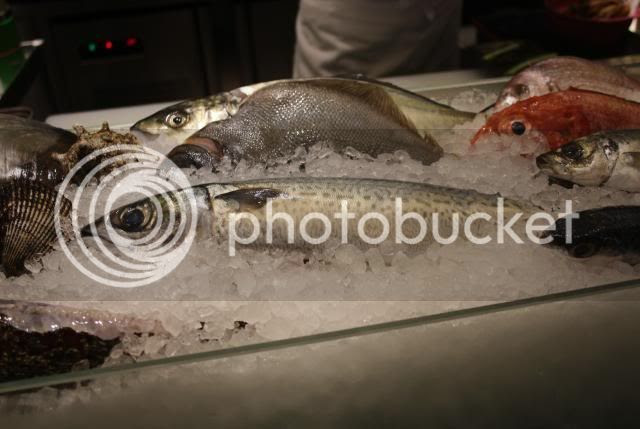 Fish so fresh, they probably were swimming off the Japanese coast the night before.  Tuesdays and Fridays are the arrival days of fresh fish from Japan, if you must know. 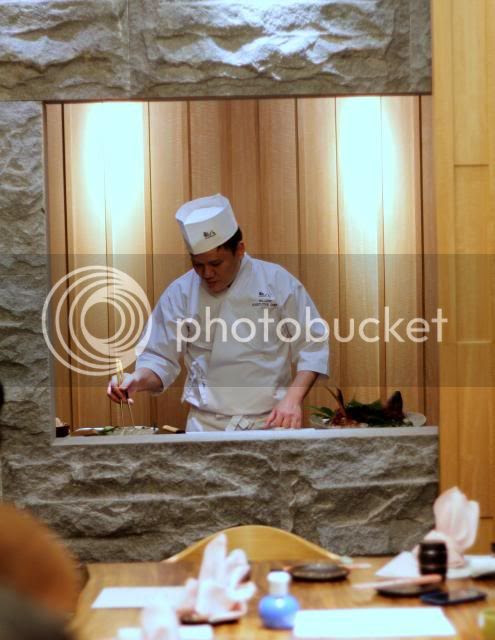 We are ushered into a private room, which has its own little cubicle for the sushi chef to perform.  Sure beats a karaoke with bad singers singing in hokkien.  Anyway, the very affable Executive Chef Looi himself carves out the sushi, as our first dish...while we partake of more booze 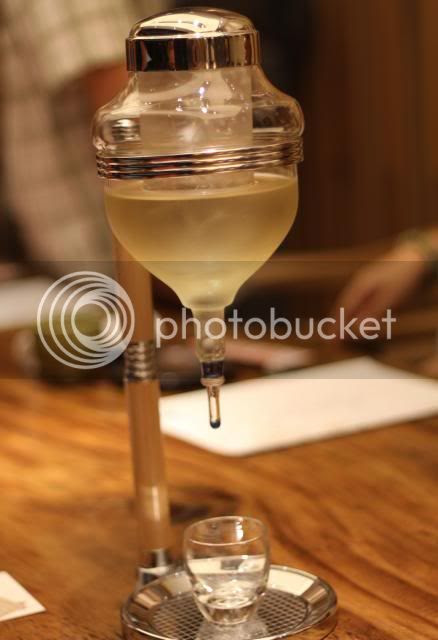 Cold sake is dispensed from this uber cool sake dispenser, which resembles the Udder of the Crystal Cow.  In the middle of the dispenser is the cooling shaft, which is filled with ice, hence ensuring the sake is not diluted, the way Chinese people add ice to their beer and red wines. 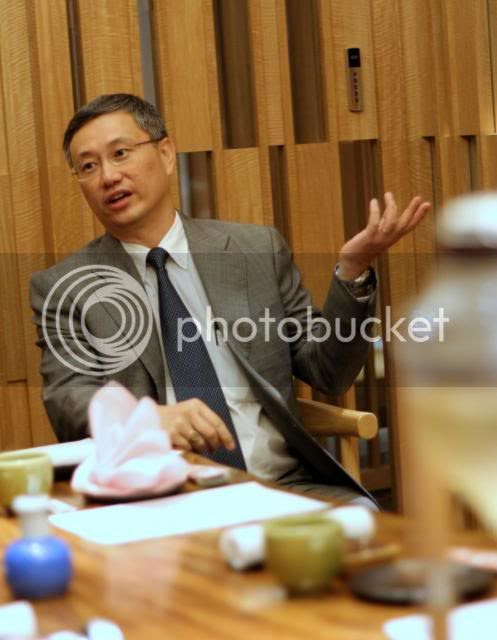 The Boss himself, Donald Lim, graces us with his presence, and shares with us his passion in setting up the various Kampachis, and reveals to us the astronomical sums spent on the ID of the place, with very expensive paper screens by expert artisans. 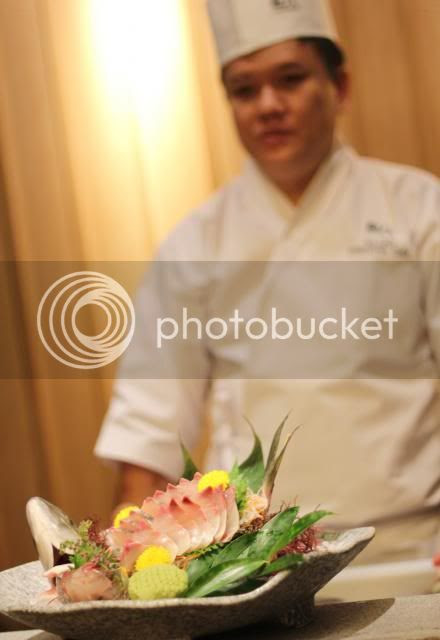 Dinner is served, and to start with, Raw Striped Jack, or Shima Aji Sashimi. 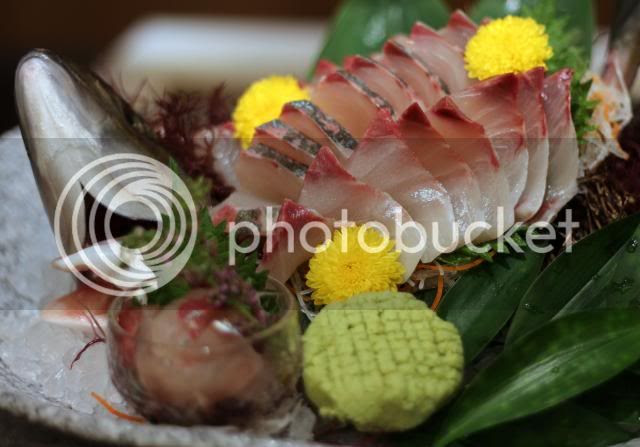 The flesh looks like Kampachi (Yellow Tail), and the freshness, incredible.  It was as if the fish took a business class flight over just to be eaten.  Firm yet tender flesh with a taste so fresh, which makes you wonder HOW you will ever settle for the buffet line type sashimis ever again.  The hazards of the "job", I tell you. 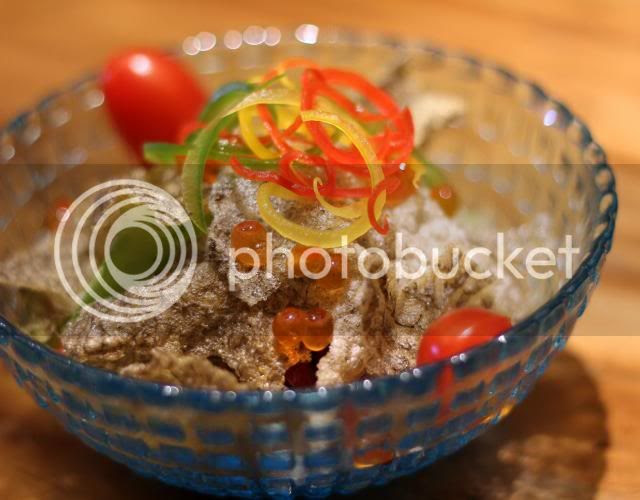 Shake Kawa Salad, Crispy Salmon Skin With Roe.  Who would have thought that salmon skin could be so delicious.  It almost makes me want to go out and buy a whole salmon, just for the skin and attempt to deep fry it to this level of crispiness.  It really is perfect.  No hint of oiliness, the tangy accompanying salad dressing, and those lovely gobules of fish roe popping in the mouth. 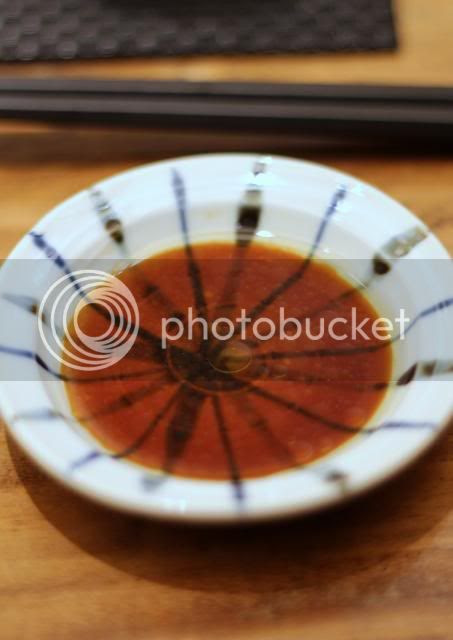 One of the highlights of the night, truffle oil with soy sauce.  A lovely dipping sauce, which was to accompany the Wagyu Teppanyaki.  While I reckon it is quite hard to go wrong with wagyu, it is even harder to enhance the meat, and what this combination does is just that.  Again, after partaking such bovine beauty, how can I ever eat indian buffalo again? 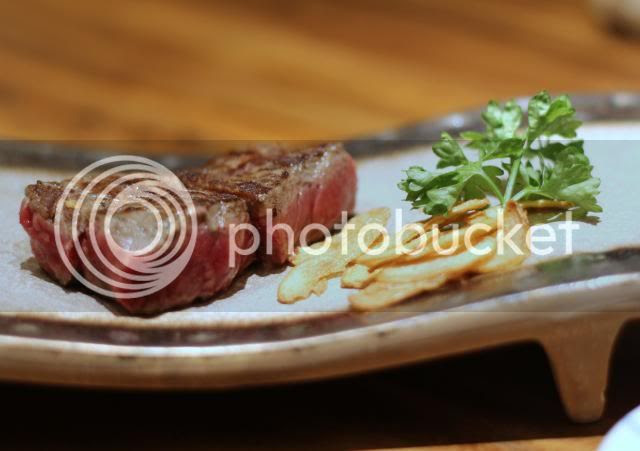 Melt in the mouth Grilled Wagyu, done to perfection, with crispy garlic chips.  We had to restrain ourselves from begging for more. 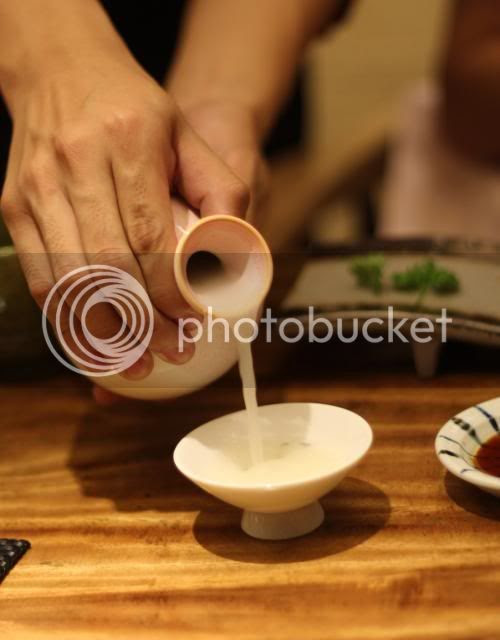 After finishing the cold sake from the udder thing, we now were given the milky one (hmm, actually this should be served from the udders come to think of it) which is best served warm.  It has a smooth taste about it, and well, blindfolded, I would not be able to tell that it was murky white. 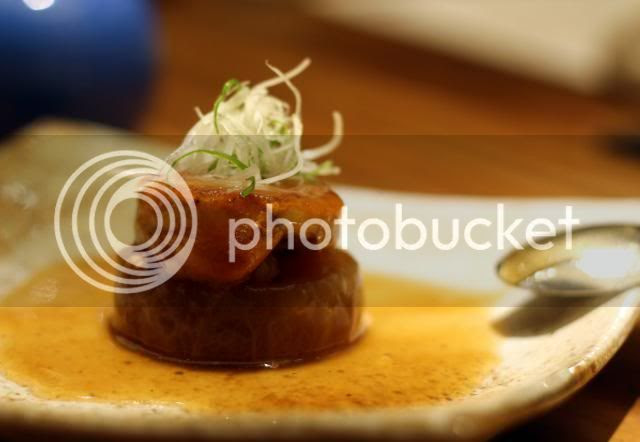 Ankimo Beko An, or Pan Seared Angle Fish Liver With Simmered Radish.  Talk about lost in translation, the Japanese words are only three...Okay, to be absolutely honest, I am sure this is a very expensive delicacy, but it had a distinct liver oil flavour about it, reminiscent of cod liver oil, which brings back childhood memory of a spoonful of scots emulsion being force fed down my throat like a goose reared for foie gras.  The accompaniment, the radish and the sauce, fabulous, but the liver, I would opt for something else in an omasake menu.  Afterall, it is a waste to waste such goodies on a plebian like me. 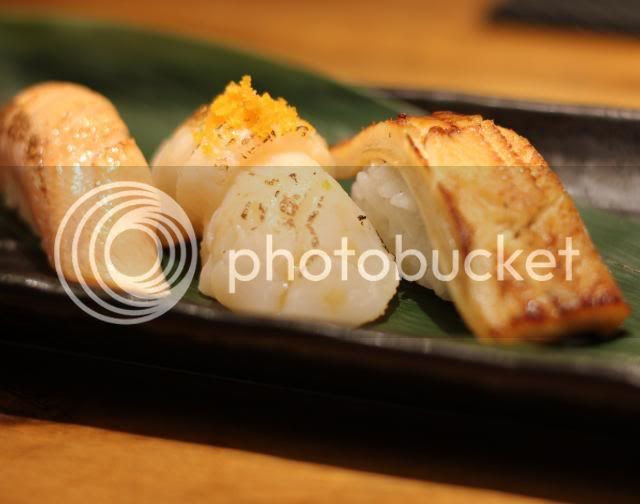 Aburi Sushi, with Anago (Conger Eel), Shake Harasu, (Salmon Belly), and Hotate (Scallop).  For the raw food averse, this would be suitable as the fish and scallops are lightly seared, oh, and hence the name, Seared Sushi.  The freshness of everything is really a theme that ran through the vein of the night's selection.  I was wondering if I would be able to afford such a dinner ordinarily, this kind of OMASAKE menu must cost a bomb.  To my pleasant surprise, the lovely Sarah Chong, Marketing Exec for Kampachi, told us that the meal we were partaking would cost RM220.  Considering the fish flew in just for the occasion, AND there was that rare angler fish liver, and that succulent melt in the mouth wagyu, I'd say it was a steal. Nothing goes to waste, and the remains of the Striped Jack is served with miso.  Ordinarily I am not a miso fan, mainly because it must be lousy miso I've been having all this while, and the MSG seizes my throat like a serial killer, but this miso, totally different kettle of fish.  Not salty, and that clean taste of the fresh Striped Jack permeates every spoonful. 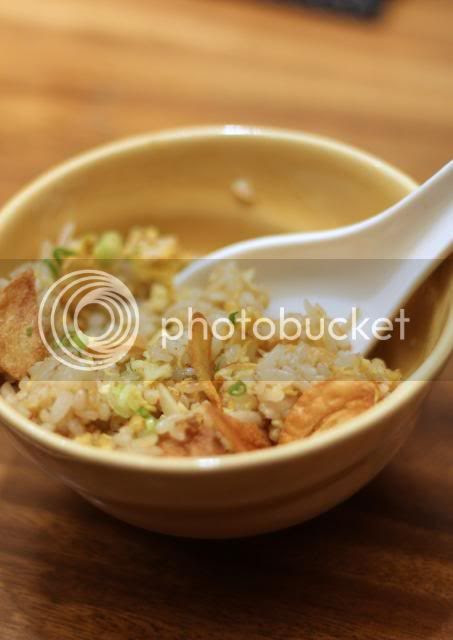 Just to ensure that no one goes for Hokkien Mee after, we were filled up with a teppanyaki garlic fried rice, and who doesn't love fried rice.  Even CIKI that anti carbo queen, finished hers, saying she had run 21km that morning, (all that training for the Standchart Marathon which has now been postponed coz of the haze, buwahahahah). 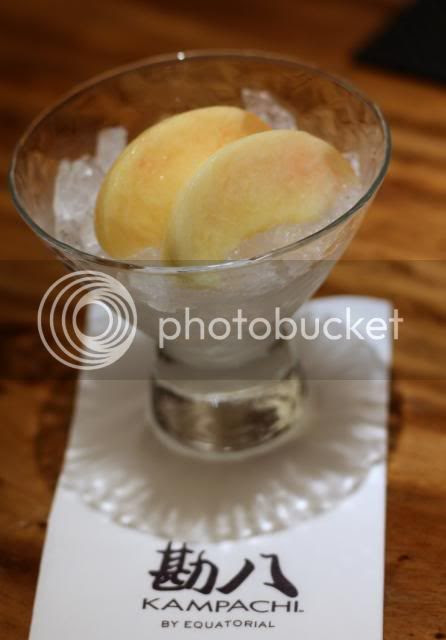 And for dessert, ...well, if you refer to my other Kampachi post at Troika, I mentioned how exorbitantly priced the honeydew melon was, at RM75 a SLICE.  Well, this MOMO (Japanese Peach) doesn't tail far behind, at a princely RM66 per peach, so I think you're looking at RM22 worth of peach in that little glass.  But wow, the taste, it really is something very different.  A gorgeous fragrance with the lightest and subtlest of flavours, concentrated peachiness in those slices.  A real treat to the palate. 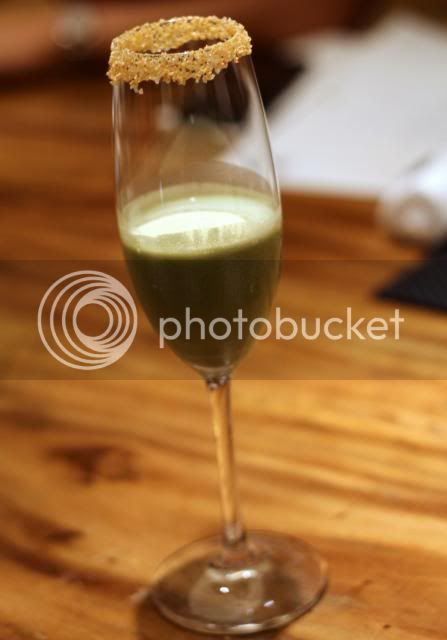 We drink a toast, with what appears to be a green tea mixture with Hakushu Single Malt Whisky, making it resemble a Japanese Baileys. 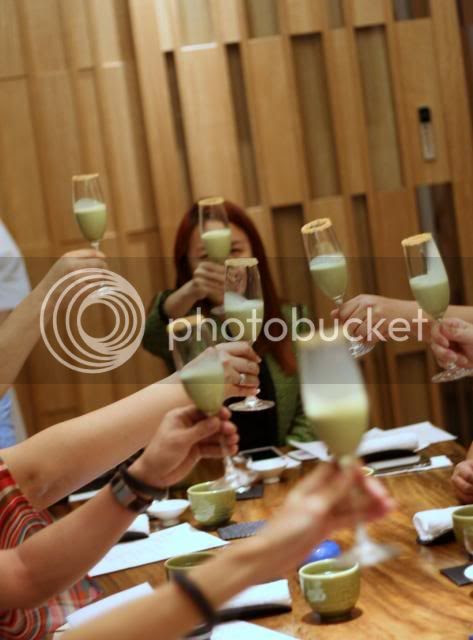 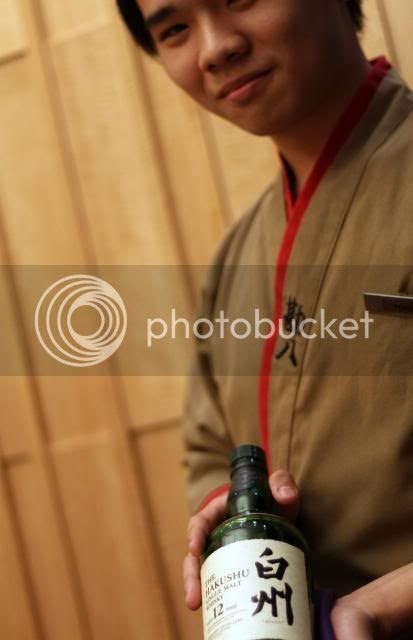 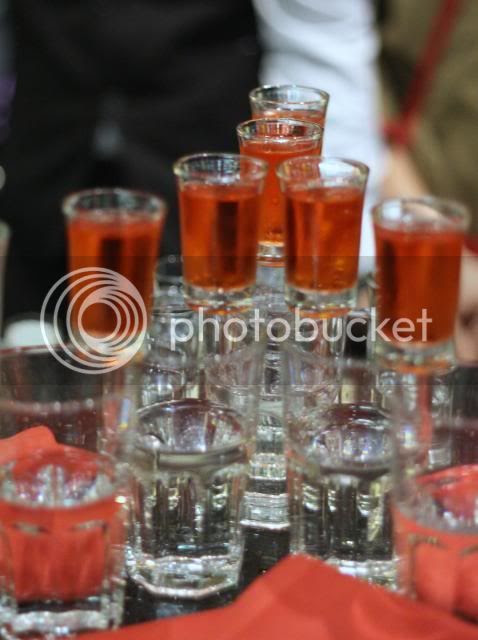 And for the FINALE and piece de resistance, something I've never seen before, SAKE BOMBES.  Shot glasses of sake are lined atop a row of beer glasses... 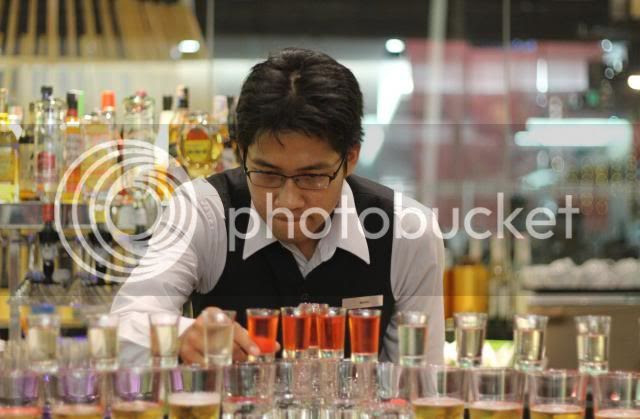 And using the domino effect, one knock sends all the shot glasses tumbling into their various beer glasses.  Amazing.... who thinks of these things! 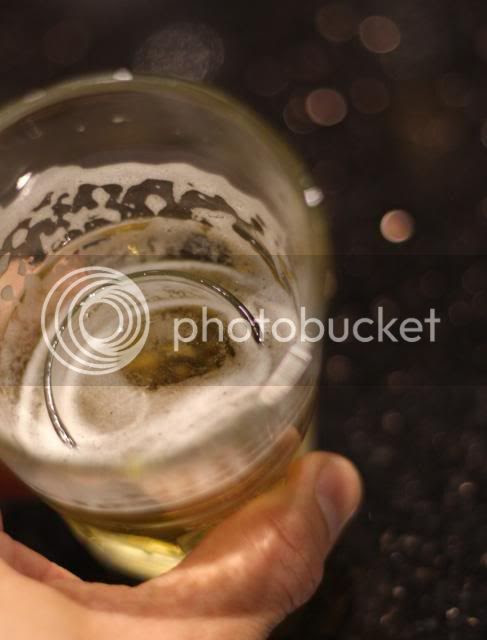 And it appears to fall into the glass correctly too. How the heck!

The famous Kampachi buffet will also be making its comeback ...or rather, has already made its comeback, but be warned, it is VERY popular and you have to book weeks in advance.

Posted by fatboybakes at 2:24 PM

wow.. great post ahpa. extremely entertaining! and great photos to boot.. *bow bow*. Even my cloudy sake photo was not clear.. and yours was. Love the toasting shot at the end. Im inspired to change camera. And finally to cap it all.. a VIDEO. You put us younger bloggers to shame:P

I hv nvr laughed so much in my life! Tq for such a tongue-in-cheek post...Hv u ever thot of being a stand-up comedian? U're definitely in my invite list for future reviews!

a very entertaining post my lil beeatch! such a treat! ;-)

Alice, really ah? I'm so honored, and glad I could make you laff.